Thalassiosira is a large diatom genus intensively studied since the 1970s, being well represented in diverse marine environments worldwide. Despite the long Brazilian coastline, about 8,500km, few taxonomic works have been performed to investigate the morphology of Thalassiosira species using electron microscope techniques. In this paper the mucilaginous species Thalassiosira diporocyclus, T. mala and T. minuscula were examined in light and electron microscopes, based on material gathered from South Brazilian waters, to record their frustule morphological variability. Some unrecorded findings related to the cribra structure and the cingulum bands are shown. T. mala has central areolae bearing fewer cribral pores than those located in the marginal region. In addition, the valve metrics of T. diporocyclus and T. minuscula are extended in relation to that reported in the current literature. The two species are new records for Brazilian waters, and T. diporocyclus is a new one in the Western Atlantic Ocean. 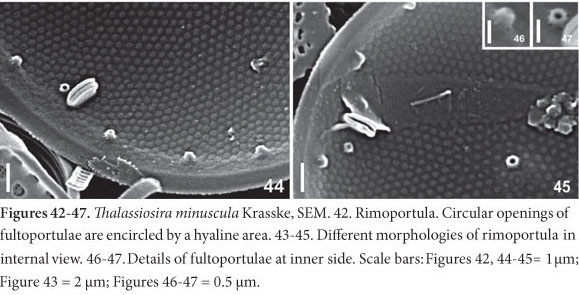