At 66, the patient had developed progressive dyspnea, initially on severe and then on minimal exertion for four months; she also had paroxysmal palpitations. She was referred for hospital treatment due to these symptoms.

The patient was aware of being hypertensive since the age of 64 and also of presenting temporal arteritis since 60 years, when she started using corticosteroids; she also had discoid lupus. She did not have diabetes mellitus or dyslipidemia and had smoked until the age of 61. Her mother had died of heart disease at age of 89.

The patient was on amlodipine 10 mg, enalapril 20 mg, and chlorthalidone 25 mg daily.

Physical examination at the first visit (August 6, 2009) showed regular pulse of 76 bpm and blood pressure of 180/70 mmHg in all limbs. Lung examination was normal. Heart examination revealed regular rhythm, there was a hyperphonesis of pulmonary component of the second heart sound, systolic murmur + + / 4 + and diastolic murmur + + / 4 + in the aortic area; the liver was palpable 2 cm from the right costal margin and there was a 5-cm periumbilical pulsatile mass; peripheral pulses were wide and water hammer pulse was felt in the femoral arteries.

The patient was diagnosed with heart failure, hypertension and aortic regurgitation due to aortitis. The diagnostic work-up proceeded.

CT angiography of the abdominal aorta showed an aortic aneurysm, which was an extension of the thoracic aneurysm, with no signs of dissection.

Surgical repair of the aortic aneurysm was indicated and the patient was admitted to the hospital to undergo the intervention (February 1, 2011).

Surgical repair of the ascending aortic aneurysm (February 8, 2011) was performed using the Bentall and De Bono technique: replacement of the ascending aorta with a valved conduit, extending to the distal arch and reimplantation of the coronaries; cerebral protection was performed by selective carotid perfusion using cold blood cardioplegic solution. In the operating room, the patient received three units of packed red blood cells, five units of platelets, five units of cryoprecipitate and three units of fresh frozen plasma.

The patient progressed with hemodynamic stability, although she was restless and had to be sedated; she was extubated on the 2nd postoperative day. As she presented with cough with purulent sputum, therapy with tazobactam was initiated on the same day for the empiric treatment of tracheobronchitis.

Two months later, she was brought to the Emergency Medical Service with lowered level of consciousness, heart rate of 69 bpm and inaudible blood pressure (at 8 pm on April 5, 2011). Volume replacement with 0.9% NaCl was started and the patient went into cardiac arrest with pulseless electrical activity. There was an initial response to cardiovascular resuscitation maneuvers; however, the patient died after cardiac arrest recurrence at 9 pm on April 5, 2011.

The patient was a 67-year-old woman with high cardiovascular risk by Framingham criteria; she had paroxysmal atrial fibrillation and large vessel vasculitis (temporal arteritis).

The patient had some risk factors that might lead to the development of aortic aneurysm, such as hypertension and smoking habit, as well as temporal arteritis. The development of aortic aneurysms in patients with temporal arteritis is a late and severe complication that affects approximately 11% of patients with this disease, with involvement of the ascending aorta being the most common feature.

In this case, surgical treatment of the aneurysm was chosen only for the ascending aortic aneurysm, using the Bentall and De Bono technique. Repair of the thoracoabdominal aneurysm was not performed at that time.

The primary diagnosis for this case was thoracoabdominal aneurysm rupture, followed by hemorrhagic shock.

The patient had a diagnosis of thoracoabdominal aortic aneurysms on CT angiography, with evidence of a maximum aortic diameter of 70 mm, which had not been corrected surgically. It is known that CT angiography very accurately detects and assesses the size of aneurysms of the thoracic and abdominal aorta3.

Regarding the abdominal aortic aneurysm, rupture is the most feared complication. It has high mortality (25% before reaching the hospital and 51% in-hospital), and 46% of patients undergoing surgery die. It is well established that the risk of rupture increases with time and the size of the aneurysm, ranging from 0.3% for those smaller than 40 mm to 33% for aneurysms with 70 mm or more in diameter3-5.

Regarding the thoracic aortic aneurysm, its main complications are rupture and dissection. Less than half of patients with this type of aneurysm rupture arrive at the hospital alive, and mortality within 24 hours reaches 76%. The risk of rupture also increases with the size of the aneurysm, ranging from 2% in aneurysms < 50 mm to 7% in those > 60 mm3-5.

The definitive treatment of aortic aneurysms, either thoracic or abdominal, is surgical. The ideal time to perform the procedure remains undefined, but it is recommended that in most ascending thoracic aortic aneurysms surgery be indicated when the diameter is > 5.5 cm. However, if the patient has a high surgical risk, surgery should only be indicated when the diameter is > 6.0 cm. If, on the other hand, there is a risk of rupture or dissection of the aorta (e.g., Marfan syndrome, bicuspid aortic valve) an earlier operation is advised with a diameter > 5.0 cm5,6.

In cases of abdominal aortic aneurysm, the aneurysm diameter is also taken into account for surgical indication. Surgical treatment should be indicated in men when the diameter is > 5.5 cm and in women, between 4.5 and 5.0 cm5,7 (Dr. Fernanda Marinho Mangione, Dr. Thiago Nunes Pereira Leite).

The pathological study of the aortic fragment removed during surgery showed nonspecific chronic aortitis, with no giant cells or significant amount of plasmocytes (Figure 4), with dense fibrosis and elastic fiber destruction (Figure 5). The aortic valve showed only secondary alterations. 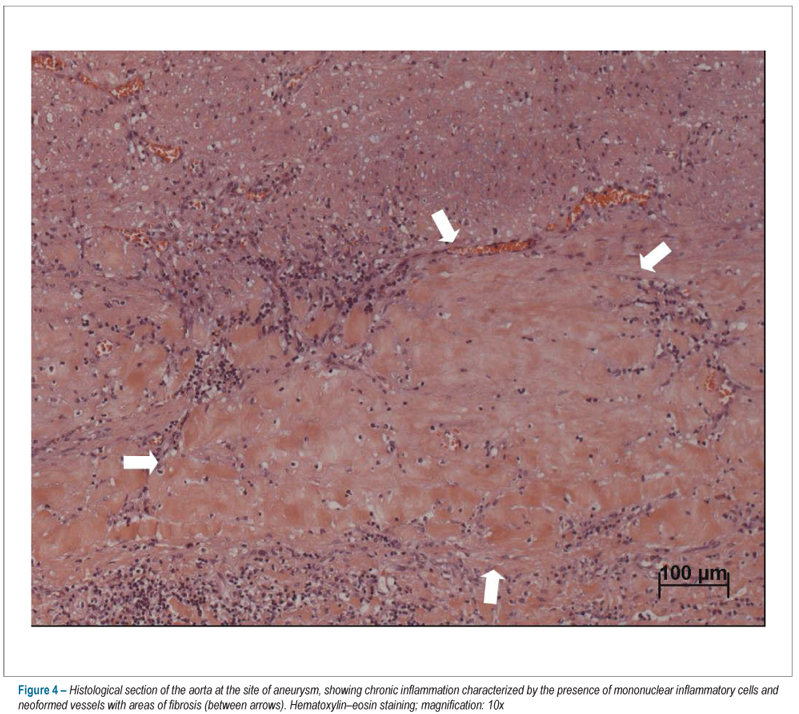 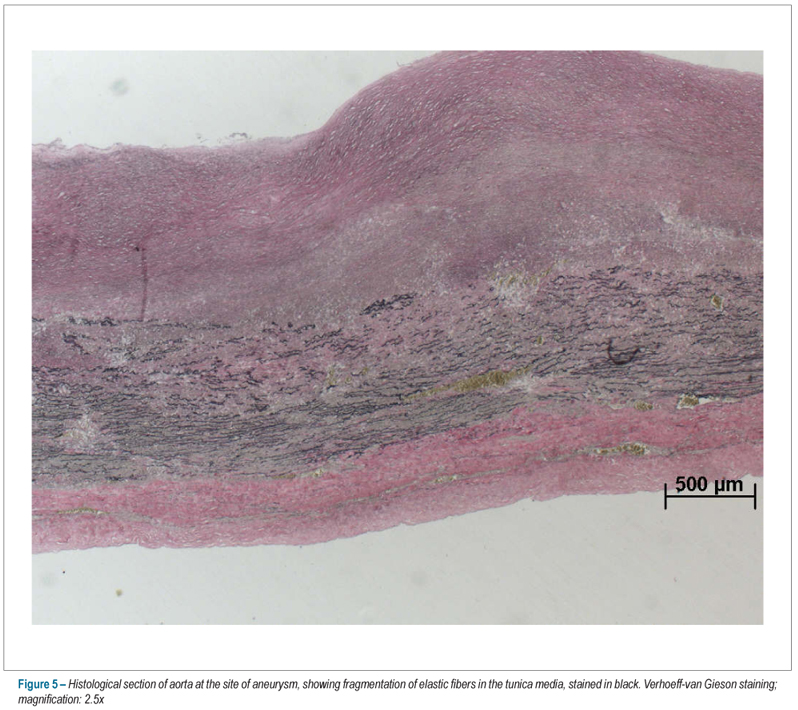 On necropsy, the operated region showed synthetic tube implant in good condition. Death resulted from hemorrhagic shock due to a ruptured aneurysm of the descending aorta to the right hemithorax. The histopathological aspect is identical to that found in the surgically removed portion.

Cause of death: hemorrhagic shock due to rupture of descending aortic aneurysm (Dr. Paulo Gutierrez).

Destruction of elastic fibers, as shown in Figure 5, is considered key to the development of aneurysm8. It results, in general, from the action of enzymes such as elastase, and others, present in inflammatory cells9.

The patient had temporal arteritis; the aortitis that caused the aneurysm is part of the same picture in which giant cells often, but not always, appear10. The histopathological pattern is quite similar to that of Takayasu arteritis, although the latter has a tendency toward greater adventitial fibrosis and fewer aneurysms. Both are more frequent in females, and age is often used as a tool to differentiate them10,11. From the morphological point of view, it is non-necrotizing arteritis12. (Dr. Paulo Sampaio Gutierrez).