We describe a rare case of permanent pacemaker implantation in a pregnant woman with rheumatic mitral valve disease previously undergoing percutaneous balloon valvuloplasty. She presented symptomatic advanced atrioventricular block of non-reversible cause and manifest in the third trimester of gestation.

We describe a rare case of permanent pacemaker implantation in a pregnant woman with rheumatic mitral valve disease previously undergoing percutaneous balloon valvuloplasty. She presented symptomatic advanced atrioventricular block of non-reversible cause and manifest in the third trimester of gestation.

Pregnancy is the most common cause of cardiac decompensation in patients with hemodynamically significant mitral stenosis due to the high incidence of rheumatic fever in our midst.

Presentation of bradyarrhythmias is uncommon during pregnancy. Some cases may require scopy-guided pacemaker implantation, thus exposing the fetus to the risks of radiation.

The clinical management of a pregnant woman with mitral stenosis presenting advanced atrioventricular block (AVB) with no potentially reversible cause was the objective of the present case report.

A 39-year-old woman, residing in Sao Paulo, in the 36th week of gestation, started to present with dyspnea on usual exertion (NYHA functional class III), occasional orthopnea, palpitations and nocturnal dry cough with episodes of hemoptysis since the second trimester of gestation. She had episodes of presyncope three months earlier. For the past week, the patient presented partial improvement of dyspnea, but remained with episodes of presyncope characterized by sporadic visual darkening not related to exertion, unaccompanied by palpitation or chest pain, lasting from seconds to minutes, with a feeling of imminent fainting, without loss of consciousness and with spontaneous cessation.

She had a history of rheumatic mitral stenosis diagnosed four years earlier during a previous pregnancy, and underwent percutaneous balloon mitral valvuloplasty at that time. She was a former alcoholic and former smoker. Obstetric history of 14 pregnancies with one spontaneous abortion and 12 normal deliveries, with no obstetrical complications during labor. She was taking propranolol 80mg/day, furosemide 40mg/day, and ferrous sulfate.

A 24-h Holter monitoring showed normal sinus rhythm, with heart rate between 43 and 147bpm and mean of 100bpm. Frequent atrial extrasystoles (307/h) and 141 periods of tachycardia with 22 beats at most and maximal rate of 195bpm. There were episodes of advanced atrioventricular block (AVB) with maximum pause of 3.6 sec. Seven days after beta-blocker discontinuation, a 24-hour Holter monitoring was repeated and identified one episode of 2:1 AVB and one episode of 3:1 AVB (Figure 2).

Before the end of pregnancy, a permanent dual-chamber pacemaker was implanted under fluoroscopic guidance and abdominal protection with lead shielding. Beta-blocker was restarted after pacemaker implantation.

The patient progressed with spontaneous resolution of pregnancy at 38 weeks and two days, via outlet-forceps delivery, with no complications. The newborn weighed 2940g and had an Apgar score of 9/9. The patient was discharged on postpartum day 3 for outpatient follow-up.

Pregnancy and puerperium are associated with important cardiocirculatory changes that may lead to marked clinical deterioration in women with heart disease: increased blood volume; anemia due to the increase in plasma volume faster than that of erythrocyte mass; progressive increase in cardiac output from the fifth to the twenty-fourth week of gestation; reduction in blood pressure with the lowest levels in the second trimester of gestation associated with decreased systemic vascular resistance.

Mitral stenosis is an important cause of hemodynamic decompensation in pregnant women. Most of the patients with moderate to severe mitral stenosis show deterioration of one or two NYHA functional classes during pregnancy1.

Pregnancy is associated with a higher incidence of arrhythmias in women whether with or without structural heart disease2,3. Atrial and ventricular extrasystoles may occur with no hemodynamic consequences.

In the review of the literature, no case describing a pregnant woman with mitral valve disease and advanced atrioventricular block during pregnancy was found.

Due to the blood volume overload that is seen during pregnancy, patients with rheumatic mitral stenosis may present hemodynamic decompensation. These patients frequently need negative chronotropic medication to control the symptoms. The well-established use of beta-blockers in the management of mitral stenosis is contraindicated in this clinical situation due to the presence of AVB. After ruling out potentially reversible causes of AVB, such as drug effect or inflammatory rheumatic activity, we chose to indicate permanent pacemaker implantation.

Fetal exposure to radiation should be avoided during pregnancy. The risk depends on the stage of pregnancy and on the dose received by the fetus. However, some precautions such as the use of lead shielding of the abdomen, collimation of the X-ray beam to the area of interest, and utilization of permanently calibrated and gauged equipment should be taken in pregnant patients who will be exposed to radiation.

An alternative described to avoid fetal exposure to radiation is echocardiography-guided permanent pacemaker implantation6,7. In this case, we chose to use the conventional fluoroscopy-guided technique because of the low risk of fetal damage, since the pregnancy was close to term. Also, the use of transesophageal echocardiographic study would have the additional inconvenient of need for sedation and risk of aspiration due to the slowed gastric emptying seen in advanced stages of pregnancy.

This report shows the importance of the correct assessment of symptoms presented by pregnant women with heart diseases8, by differentiating expected disorders in a normal pregnancy from signs of heart disease in imminent decompensation. Presyncope and dizziness may occur during normal pregnancy; however, the differential diagnosis with bradyarrhythmias or tachyarrhythmias should be remembered in patients with structural heart disease. The presence of symptomatic advanced AVB, although intermittent, led to the indication of permanent pacemaker implantation. We chose not to indicate mitral valve reintervention, since the patient had an estimated valve area greater than 1.5 cm2. Mitral regurgitation may have been overestimated as moderate due to the increased plasma volume that occurs during pregnancy. After pacemaker implantation, we chose to maintain the medical treatment with beta-blocker and diuretics.

No potential conflict of interest relevant to this article was reported.

There were no external funding sources for this study.

This study is not associated with any graduation program. 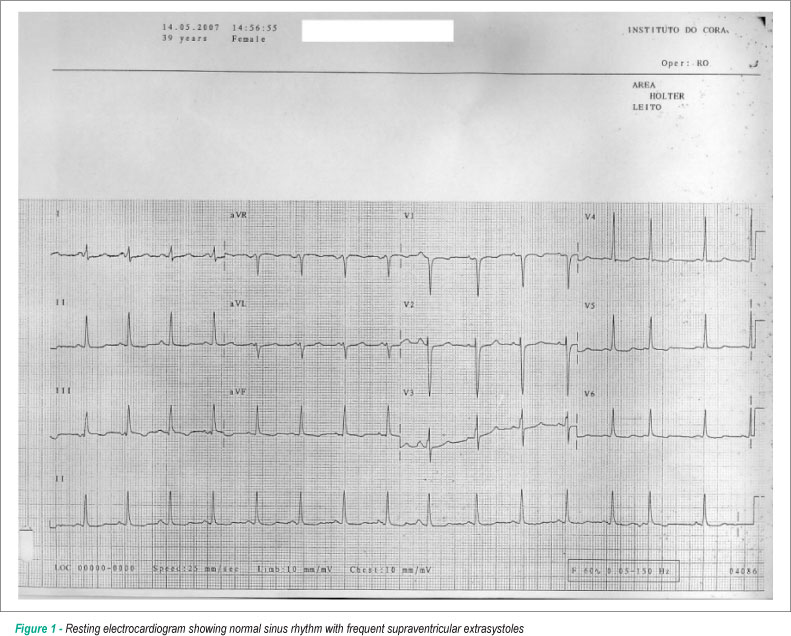