BACKGROUND: Brazil lacks published multicenter registries of acute coronary syndrome. OBJECTIVE: The Brazilian Registry of Acute Coronary Syndrome is a multicenter national study aiming at providing data on clinical aspects, management and hospital outcomes of acute coronary syndrome in our country. METHODS: A total of 23 hospitals from 14 cities, participated in this study. Eligible patients were those who came to the emergency wards with suspected acute coronary syndrome within the first 24 hours of symptom onset, associated with compatible electrocardiographic alterations and/or altered necrosis biomarkers. Follow-up lasted until hospital discharge or death, whichever occurred first. RESULTS: Between 2003 and 2008, 2,693 ACS patients were enrolled, of which 864 (32.1%) were females. T he final diagnosis was unstable angina in 1,141 patients, (42.4%), with a mortality rate of 3.06%, non-ST elevation acute myocardial infarction (AMI) in 529 (19.6%), with mortality of 6.8%, ST-elevation AMI 950 (35.3%), with mortality of 8.1% and non-confirmed diagnosis 73 (2.7%), with mortality of 1.36%. The overall mortality was 5.53%. The multiple logistic regression model identified the following as risk factors for death regarding demographic factors and interventions: female gender (OR=1.45), diabetes mellitus (OR=1.59), body mass index (OR=1.27) and percutaneous coronary intervention (OR=0.70). A second model for death due to major complications identified: cardiogenic shock/acute pulmonary edema (OR=4.57), reinfarction (OR=3.48), stroke (OR=21.56), major bleeding (OR=3.33), cardiopulmonary arrest (OR=40.27) and Killip functional class (OR=3.37). CONCLUSION: The Brazilian Registry of Acute Coronary Syndrome data do not differ from other data collected abroad. The understanding of their findings may help promote better planning and management of acute coronary syndrome care in public and private health services.

OBJECTIVE: The Brazilian Registry of Acute Coronary Syndrome is a multicenter national study aiming at providing data on clinical aspects, management and hospital outcomes of acute coronary syndrome in our country.

METHODS: A total of 23 hospitals from 14 cities, participated in this study. Eligible patients were those who came to the emergency wards with suspected acute coronary syndrome within the first 24 hours of symptom onset, associated with compatible electrocardiographic alterations and/or altered necrosis biomarkers. Follow-up lasted until hospital discharge or death, whichever occurred first.

CONCLUSION: The Brazilian Registry of Acute Coronary Syndrome data do not differ from other data collected abroad. The understanding of their findings may help promote better planning and management of acute coronary syndrome care in public and private health services.

In the year 2010, circulatory system diseases, the third leading cause of hospitalization, with 210,046 hospitalizations due to ischemic heart disease were responsible, in Brazil, for 29% of deaths, of a total of 1,133,761. The absolute number of deaths from ischemic heart disease in that year was 99,408 deaths or 52.11 deaths/100,000 inhabitants, whereas deaths from cerebrovascular diseases was 99,159 or 51.98 deaths/100,000 inhabitants1. The prevalence of Coronary Artery Disease (CAD) in the adult population is estimated at 5-8%2.

In 2010, there were 79,954 deaths associated with acute coronary syndrome (ACS). These figures account for the total number of deaths from angina and acute myocardial infarction (AMI), corresponding to 7.05% of total deaths in the year, or 24.67% of deaths from circulatory system diseases1.

The main source of health coverage in the country is provided by SUS, whereas private health insurance accounted for 25.9% (95% confidence interval - 95% CI = 25.4 to 26.4) of the population in 2008. ACS was responsible for the highest costs with hospital admissions, corresponding to a total of R$ 1.9 billion or 19% of total cost with hospitalizations3.

The knowledge of hospital behavior of patients with ACS is essential for immediate in-hospital risk stratification and in the long term, for the acute episode survivors, as well as to show how these patients are managed in our country.

Several international ACS registries have been published, including some with the participation of Brazilians centers5-8. National registries are scarce and included patients from a single center, not representative of the national reality9. The Brazilian Registry of Acute Coronary Syndromes (RBSCA), partially presented in national10 and international11 congresses, aims to fill this gap, providing this information to interested professionals. It aims to disclose the results of a large national multicenter registry, representative of the characteristics, management and hospital evolution of ACS in the country.

RBSCA is a prospective, national, multicenter, non-funded study, designed to assess in-hospital data from patients with suspected ACS, admitted to the emergency department of hospitals invited to participate in the study, in different parts of Brazil, aiming to reflect the behavior of ACS in hospitals with the characteristics described below. The invited hospitals should have prior experience in clinical trials, as well as the main investigators, who should be experienced in research activities.

A total of 23 hospitals located in 14 cities participated in the RBSCA, of which four were private, 15 were philanthropic and four were public. Of these, six did not provide health care services through SUS. All had coronary care units or emergency rooms with electrocardiographic monitoring, hemodynamic laboratory and were able to carry out percutaneous coronary intervention and cardiac surgery procedures (Appendix 1).

The principal investigators were Board Certified20 by the Brazilian Cardiology Society (SBC) and / or had an academic degree14.

The target population consisted of patients admitted to the emergency department or coronary care unit with a diagnosis of ACS.

Eligible patients were those who presented to the emergency room with suspected ACS, with a suggestive clinical picture, associated with compatible ECG alterations and/or altered necrosis markers. We included only patients with up to 24 hours of symptom onset. Follow-up was performed until hospital discharge or death, whichever occurred first.

For AMI with ST-segment elevation (STEMI):

 increase in biochemical markers of necrosis;

For AMI with no ST elevation (NSTEMI):

 increase in biochemical markers of necrosis.

 no increase in biochemical markers of necrosis

Data were collected and sent in electronic form through the internet to the Coordinating Center, located at Instituto Dante Pazzanese de Cardiologia. This form, containing 182 questions, included identification, personal history, demographics, diagnosis, hospital evolution, complications, drug treatment, interventions and hospital discharge status. When there were discrepancies in relation to the received data, the Research Center was contacted.

The study protocol was approved by the Ethics Committees of the participating hospitals, and enrolled patients signed the free and informed consent form, according to Resolution #196 of the National Health Council, of October 10, 1996.

The nonparametric Mann-Whitney test was used for the comparison alone (univariate) of these measures between groups13. To better understand the predictors of risk of death, two analyses of multiple logistic regression models were performed14: one to identify demographic factors and associated in-hospital interventions, and another to identify the influence of major complications on death. Effects or differences were considered statistically significant when p values < 0.05 were found. All statistical analyses were performed using the Statistical Package for Social Sciences (SPSS), release 19.

The most frequent final diagnosis was UA, followed by STEMI and NSTEMI, as shown in Table 4.

Clinical records are an excellent opportunity to evaluate the clinical presentation, behavior, treatment and outcome of a disease and the patients affected by it. Randomized clinical trials, while also providing clinical information, follow specific inclusion criteria, thus limiting the sample. In registries, patients are not selected and their findings more properly reflect the so-called "real world", in which cardiologists work and live their daily routine.

Regarding this approach of the RBSCA database, we sought to analyze the entire spectrum of ACS, without differentiating the three clinical pictures (UA, NSTEMI and STEMI). A total of 2693 patients were included and we sought to establish the importance of the main variables analyzed and correlate them with the complications and deaths observed during hospitalization.

The Brazilian Registry on Acute Coronary Syndromes (BRACE) analyzed regional differences on the use of drugs and reperfusion therapies (fibrinolytics and primary angioplasty) in 1,150 patients16.

Although a statistical comparison is not possible because data from the BRACE and ACCEPT-SBC are not available on an individual basis, the available numerical comparisons show no large discrepancies (Table 7). Only mortalities in ACCEPT-SBC and RBSCA are different (2.75 and 5.53%), respectively, probably due to the characteristics of hospitals and patients, since only 50% of hospitals met the ACCEPT-SBC treated SUS patients, while in RBSCA this figure reached 74%. In ACCEPT-SBC, coronary angiography was performed in 80.6%, PCI in 50.8% and coronary artery bypass graft surgery (CABG) in 6.1% of patients; in RBSCA, these figures were 84.5%, 52.7 % and 11.6%, respectively.

In RBSCA, the risks most often associated with ACS onset and that had prevalence > 40% were arterial hypertension, prior angina, dyslipidemia, family history of CAD and drug treatment for CAD. Other baseline conditions associated with mortality, although less frequent (< 40%) were female gender, smoking (negative), CVA, heart failure, chronic renal failure, diabetes mellitus and percutaneous coronary intervention. Heart rate, systolic and diastolic blood pressure, BMI and diagnosis at discharge were associated with a higher in-hospital mortality.

The mortality was significantly higher among those who received intravenous beta-blockers, nitrates, tirofiban, amiodarone, lidocaine, diuretics. In this type of study, it is difficult to characterize medications as being protective or not. The prescription of certain drugs, such as diuretics and antiarrhythmics, is often associated with clinical severity. It has been observed that the therapy prescribed follows the recommendations established by national guidelines21,22.

Although the invited investigators were all experienced in clinical research (Appendix 1) there was no local monitoring or auditing for information verification, due to lack of financial resources. All information collected was reported by participating services. Only missing or discrepant data were verified.

The participating hospitals, concentrated in the South and Southeast regions, are tertiary hospitals equipped for interventional procedures, either percutaneous or surgical, representing a differentiated profile for ACS care.

Although continuous inclusion was requested, it is possible that it has not occurred and those who died during the initial care may not have been included.

RBSCA is a robust registry, with a significant sample of ACS patients admitted to 23 hospitals in Brazil. This registry aimed to identify all inpatients, avoiding the unit individualization of this syndrome, which could compromise results, due to the difficulty found in diagnostic characterization. Data were collected through the internet, providing consistent information and preventing mistakes often committed when collecting written data. As the participating hospitals are tertiary institutions, these data must reflect the best treatment these patients receive in our country.

This ACS registry has had its partial findings previously disclosed both at national10,20 and international level11,21. Its results, although with the usual limitations of comparisons, do not differ from data collected by other registries, inside and outside the country, being consistent with them.

Understanding these findings may help in mapping our inconsistencies and improving the planning of public and private care of ACS.

No potential conflict of interest relevant to this article was reported.

There were no external funding sources for this study.

This study is not associated with any post-graduation program. 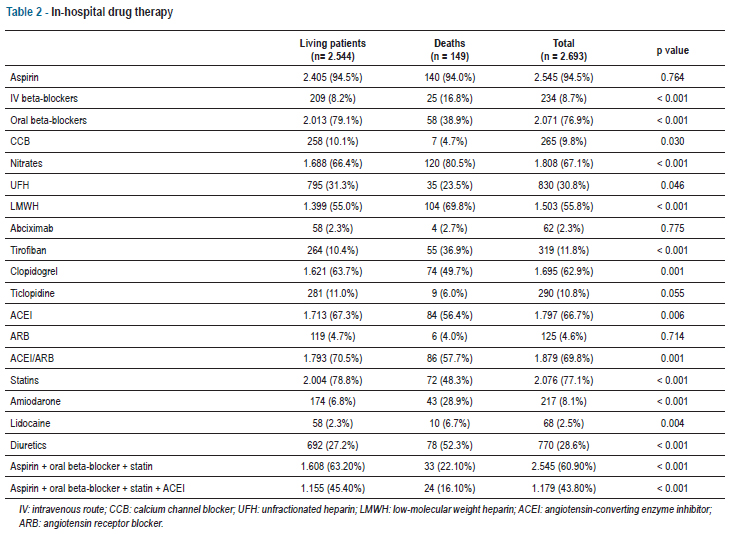 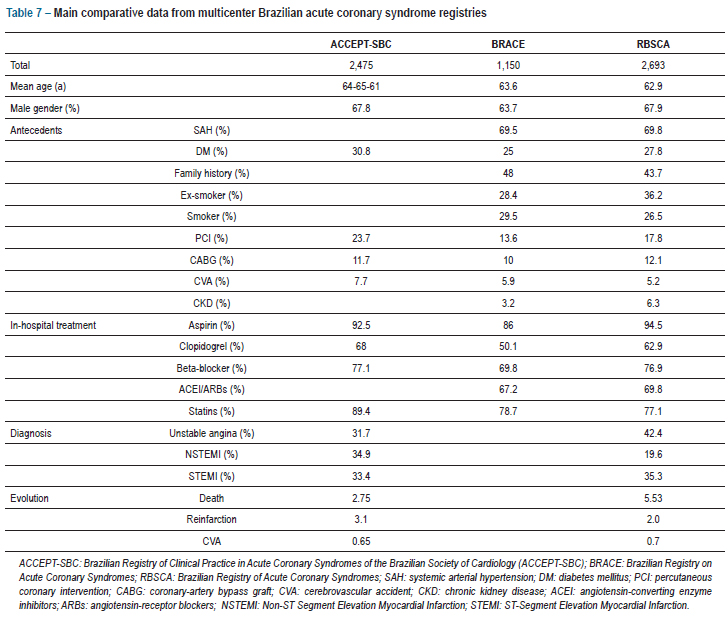