Some factors can act on nutritional status of patients operated for a gastrointestinal cancer. A timely and appropriate nutritional intervention could have a positive effect on postoperative outcomes.

To determine the effect of a program of intestinal rehabilitation and early postoperative enteral nutrition on complications and clinical outcomes of patients underwent gastrointestinal surgery for cancer.

This is a prospective study of 465 patients underwent gastrointestinal surgery for cancer consecutively admitted in an oncological intensive care unit. The program of intestinal rehabilitation and early postoperative enteral nutrition consisted in: 1) general rules, and 2) gastrointestinal rules.

Implementing a program of intestinal rehabilitation and early postoperative enteral nutrition is associated with reduction in postoperative complications and improvement of clinical outcomes in patients undergoing gastrointestinal surgery for cancer.

So, this study aimed to determine the effect of a program of intestinal rehabilitation and early postoperative enteral nutrition (IREPEN) on postoperative complications and clinical outcomes of patients underwent gastrointestinal surgery for cancer.

This was a prospective cohort study conducted in the oncological ICU (OICU) of the Institute of Oncology and Radiobiology (IOR). This is a 220-bed, university-affiliated, tertiary care referral centre for cancer patients in Havana, Cuba. The OICU has 12 beds and provides care for about 400 surgical cancer patients per year. The current study was conducted in accordance with the Declaration of Helsinki, and it was approved by the Scientific Council and the Ethics Committee for Scientific Research of the OICU (November 2013). Written informed consent was obtained from all patients.

A total of 1368 consecutive cancer patients were admitted to the OICU during the study period; of these, 493 underwent gastrointestinal tract surgery (oesophagus, stomach, hepato-biliary-pancreatic, small intestine, or colo-rectum, as well as retroperitoneum, urologic or gynaecologic surgery with intestinal suture). Patients underwent palliative surgery and those for whom ≥75% of the tumour or metastases could not be removed were excluded because patients in advanced stages can show basic features that distinguish them from those with cancer in remission (Figure 1). Thus, their exclusion reduced the risk of selection bias.

The program consisted in:

Mortality in the OICU, length of OICU stay, hospital mortality, length of hospital stay, and unplanned OICU readmission were assessed as clinical outcomes.

A total of 465 patients were analyzed. The main characteristics of study population are depicted in Table 1. The mean age was 63.7±9,7 years. Advanced cancer (stage IIIb-IV) was achieved in 106 (22.8%) patients. The most common surgical location was colorectal (44.9%), followed by gynaecological with intestinal suture (15.7%) and oesophago-gastric surgery (11%). The emergency surgery was carried out in 12.7%. The mean APACHE II score was 11.4±3.6 points. Thirty-one patients (6.8%) required invasive ventilator support during their stay in ICU.

The IREPEN program is centred in early nasogastric tube remove and early enteral postoperative nutrition. Historically, a nasogastric tube is placed in the operating room for patients undergoing an abdominal surgery; commonly nasogastric tube remains placed several days after operation. However, more than 30 years ago the scientific evidence has grown with regard to the disadvantages of this strategy, mainly because of lack of beneficial effects, insufficient perioperative enteral nutrition and higher postoperative complication rates11 Abunnaja S, Cuviello A, Sanchez JA. Enteral and Parenteral Nutrition in the Perioperative Period: State of the Art. Nutrients. 2013; 5:608-23..

Strengths of this study include its prospective nature and its patient composition. Some prior studies in this field have limited enrolment to only patients undergoing specific operation such as oesophageal, gastric, pancreatoduodenectomy or colorectal surgery. Thus, in our study patient composition was more representative of current clinical settings. However, it has several shortcomings. First, the study design was not a randomized controlled trial. Second, although the sample size was acceptable for monocentre investigation, it could be considered as a limitation. Third, nutritional variables were not directly measured.

A program of intestinal rehabilitation and early postoperative enteral nutrition reduces both medical and surgical complications, and improves postoperative clinical outcomes in patients undergoing gastrointestinal surgery for cancer. This strategy of treatment contributes to progress in quality of care for postoperative abdominal cancer patients. In addition, it could be an alternative to more complex therapeutic scheme such as ERAS program. 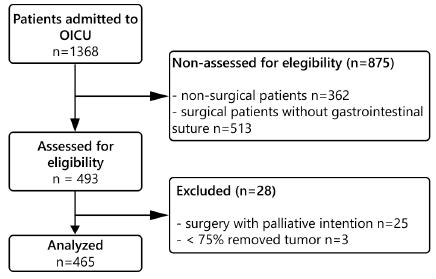