Laparoscopic cholecystectomy versus minilaparotomy in cholelithiasis: systematic review and meta-analysis

To compare laparoscopic and minilaparotomy cholecystectomy in the treatment of cholelithiasis.

A systematic review of randomized clinical trials, which included studies from four databases (Medline, Embase, Cochrane and Lilacs) was performed. The keywords used were "Cholecystectomy", "Cholecystectomy, Laparoscopic" and "Laparotomy". The methodological quality of primary studies was assessed by the Grade system.

In cholelithiasis, laparoscopic cholecystectomy is associated with a lower incidence of postoperative pain and infectious complications, as well as shorter length of hospital stay and time to return to work activities compared to minilaparotomy cholecystectomy.

About 750,000 patients undergo cholecystectomy per year in the United States, and the number of surgical procedures has grown increasingly over the years, with the purpose to avoid the symptoms, complications and recurrence of gallstones in the biliary tract1313. Laura M, Shaffer S, Shaffer EA. Epidemiology of Gallbladder Disease: Cholelithiasis and Cancer. Gut and Liver, April 2012, Vol. 6, No. 2, pp. 172-187..

The introduction of the laparoscopic technique in 1985, first made by Mühe was an important factor for the large increase in the cholecystectomy , since it represented a less invasive technique, generated better esthetic result and provided a lower surgical risk compared to the conventional procedure1717. Mühe E. Die erste cholecystektomie durch das laparoskop. Langenbecks Arch Surg. 1986; 369-804..

This review aims to compare laparoscopic and minilaparotomy cholecystectomy in the treatment of cholelithiasis regarding perioperative complications, length of hospital stay, surgical time, incidence of reoperation and conversion to open surgery and time for returning to labor activities.

Identification and selection of studies

The articles were selected independently and in pairs, by reading the titles and abstracts. Any difference between the articles was resolved by consensus.

Inclusion criteria: 1) randomized controlled trials; 2) comparison between laparoscopic and minilaparotomic cholecystectomy in cholelithiasis; 3) analysis of at least one of the outcomes described below; 4) a clear description of the surgical indication.

Exclusion criteria: 1) non-randomized trials, cohort, case-control and case report; 2) outcomes of interest not reported for both surgical techniques; 3) failure to provide data for performing at least one calculation in the meta-analysis; 4) studies that correspond to the same sample and identical study authors.

The meta-analysis was performed with the Review Manager 5.2 program. Data were evaluated by intention-to-treat, meaning the patients that did not undergo the proposed intervention or patients lost in follow-up during the study were considered as clinical outcome.

The evaluation of the dichotomic variables was performed by the difference in absolute risk (RD) adopting a 95% confidence interval. When there was a statistically significant difference between the groups, the number needed to treat (NNT) or the number needed to cause harm (NNH) was calculated. The continuous variables were evaluated by the difference in means (MD). Studies that did not show data in terms of means and their respective standard deviations were not included in the analyses.

In total, 2071 articles (Medline=900; Embase=1135; Cochrane=3 and Lilacs= 27) were retrieved through the electronic searches. In manual search no articles were found in addition to the previously selected on the bases cited. After using methodological filter Randomized Controlled Trial, 77 articles remained for analysis by title and abstracts. Sixty-seven were excluded for not comparing laparoscopic and minilaparotomy cholecystectomy. Thus, in this review were included in the analysis ten randomized clinical trials (Figure 1).

Figure 1
Search algorithm of articles in the literature

Evaluation of methodological quality of the selected studies performed by GRADE system include 11 questions that were answered as: Y=yes; N=no; ND=not described (no information enabling the evaluation).

The questions and answers according to each study were: 1) was the study randomized? Y for all; 2) was the allocation of patients to groups confidential? N to Velázquez-Mendoza (2012) and Y for the rest; 3) were patients analyzed in the groups to which they were randomized (was the analysis by intention to treat)? Y for all; 4) were patients in both groups similar with respect to the previously known prognostic factors? Y for all; 5) was the study blind? ND to Vagenas (2006) Harju (2006), Srivastava (2001), McMahon (1994) and Barkun (1992) and Y for the remainder; 6) except the experimental intervention, were the groups treated equally? Y for all; 7) were the losses significant? ND to Vagenas (2006) Harju (2006) and Srivastava (2001) and N for the remaining; 8) did the study have a precision estimate for the effects of treatment? Y for all; 9) are the study patients similar to those of interest? Y for all; 10) are the outcomes of the study clinically relevant? Y for all; 11) were the potential conflicts of interest declared? ND for all.

Nine primary studies analyzed the outcome surgical conversion. The conversion was defined: laparoscopy-laparotomy and minilaparotomy-laparotomy. There was no statistically significant difference between the two groups (RD -0,03; CI95% -0,06 a 0,00; p=0.06; I2=66%).

Time to return to labor activity

Injury to the common bile duct

Infection of the surgical site

In general, the Purkayastha's study demonstrated statistically significant results only for the conversion rate, abdominal complications and duration of sick leave (p=0.02, p=0.006 and p=0.009 respectively). The inability to perform meta-analysis of the costs of surgical procedures and analgesics requirements as well as aesthetic and quality of life - due to inconsistencies in the way that these results were reported - also limited conclusions that could be drawn.

In this review, it became clear that the LC showed a lower incidence of postoperative pain (p<0.00001). Patients' expectations and sociocultural influences are important additional factors that influence the use of analgesics. However, any cultural divergence on the consumption of drugs should affect both groups (LC and MC) equally2424. Vagenas K, Spyrakopoulos P, Karanikolas M, Sakelaropoulos G, Maroulis I, Karavias D. Mini-laparotomy cholecystectomy versus laparoscopic cholecystectomy: which way to go? Surg Laparosc Endosc Percutan Tech. 2006 Oct; 16(5):321-4.. In relation to infectious complications, they were less in the LC than MC (p=0.002).

The time to return to labor activity was lower in LC than in MC (p=0.03). The main determinants in this sense are subjective and influenced by the attitudes of patients and doctors1515. Majeed AW, Troy G, Nicholl JP, Smythe A, Reed MW, Stoddard CJ, Peacock J, Johnson AG (1996) Randomised, prospective, single-blind comparison of laparoscopic versus small-incision cholecystectomy. Lancet. 1996; 347: 989-994. According to Majeed et al 1414. Majeed AW, Brown S, Hannay DR, Johnson AG. Variations in medical attitudes to postoperative recovery period. BMJ 1995; 311: 296., surgeons and clinicians tend to keep patients undergoing MC out of work more than those who underwent LC. However, in this study, patients decided their time of sickie, and those undergoing MC returned to work at the same time or earlier than those who underwent LC.

Surgical conversion got no statistically significant result (p=0.06). It should be consider that the conversion of an LC or MC will not necessarily lead to a worse outcome patient1515. Majeed AW, Troy G, Nicholl JP, Smythe A, Reed MW, Stoddard CJ, Peacock J, Johnson AG (1996) Randomised, prospective, single-blind comparison of laparoscopic versus small-incision cholecystectomy. Lancet. 1996; 347: 989-994. The incidence of surgical site infection (p=0.52), injury to the common bile duct (p=1,00), perforation of the gallbladder (p=0.98), postoperative ileus (p=0.22) and surgical intervention (p=0.27) were not significant.

Purkayastha1818. Purkayastha S, Tilney HS, Georgiou P, Athanasiou T, Tekkis PP, Darzi AW. Laparoscopic cholecystectomy versus mini-laparotomy cholecystectomy: a meta-analysis of randomised control trials. Surg Endosc. 2007 Aug;21(8):1294-300. Epub 2007 May 22. used in their meta-analysis, in certain outcomes, the odds ratio (OR) which shouldn't be used in therapeutic studies, because it distorts the veracity of the data and its heterogeneity. In this review, was chosen to express the results in the form of NNT or NNH when the data were statistically significant, which express respectively the required number of patients who need to be treated to obtain benefit or harm of the outcome analyzed.

Systematic review and meta-analysis is a type of study of scientific accuracy for selecting the best available evidence in the medical literature; but should also assess the methodological quality of primary studies. This is critical to obtaining accurate conclusions about the effect of interventions.66. Dubois F, Barthelot G. Cholecystectomie par minilaparotomie.Nouv. Presse Med. 1982 1:1139. To avoid distortions, it was decided to include only results with clinical and statistical homogeneity.

In this review was not used the Jadad33. Brasil. Ministério da Saúde. Datasus. Sistema de Informações Hospitalares do SUS. Informações de Saúde: Procedimentos Hospitalares do SUS - Brasil. Brasília; 2013. Acesso em: 10 de julho de 2013. scale for critical assessment of the methodological quality of primary studies, because it includes the blinding parameter. It is known that in surgical studies, particularly those that compare laparoscopic and laparotomic techniques, it isn't possible the blinding of the surgeon. Thus, the maximum Jadad scale in this type of study would be three, which would limit the selection of included studies.

The GRADE method includes the Jadad parameters and analyzes the most widely prognostic factors previously known, the estimation accuracy for the treatment effects, the similarity between the groups of patients, the clinical relevance of outcomes and the declaration of conflicts of interest.

One possible source of bias may be the differences between the processes of randomization of the included studies. However, the quality of the allocation process was considered adequate in all studies. All the patients analyzed had defined eligibility criteria.

In statistical analysis, the calculation of sample size and analysis by intention to treat were used. A common limitation of the analysis of surgical time and length of hospital stay was the lack of statistical measures such as standard deviation or present continuous data as median and range. However, the main limitation is the precise definition of MC used in the studies analyzed, ranging from 3 to 10 cm incisions.1616. McMahon AJ, Russell IT, Baxter JN, Ross S, Anderson JR, Morran CG, Sunderland G, Galloway D, Ramsay G, O'Dwyer PJ. Laparoscopic versus minilaparotomy cholecystectomy: a randomised trial. Lancet.1994 Jan 15;343(8890):135-8. , 2222. Srivastava A, Srinivas G, Misra MC, Pandav CS, Seenu V, Goyal A. Cost-effectiveness analysis of laparoscopic versus minilaparotomy cholecystectomy for gallstone disease. A randomized trial. Int J Technol Assess Health Care. 2001; 17: 497-502

The study followed all the ethical and confidentiality principles of information that are recommended for dealing with analysis of results already published in other articles, was not required formal approval from a research ethics committee.

Laparoscopic cholecystectomy is associated with a lower incidence of postoperative pain and infectious complications, as well as shorter hospital stay and time to return to labor activity, compared to minilaparotomy cholecystectomy. However, laparoscopy has longer surgical time compared to minilaparotomy. There was no statistically significant difference in outcomes surgical conversion, surgical site infection, surgical reintervention, injury of the common bile duct, gallbladder perforation and postoperative ileus.

Thumbnail
Figure 1
Search algorithm of articles in the literature

Figure 1   Search algorithm of articles in the literature 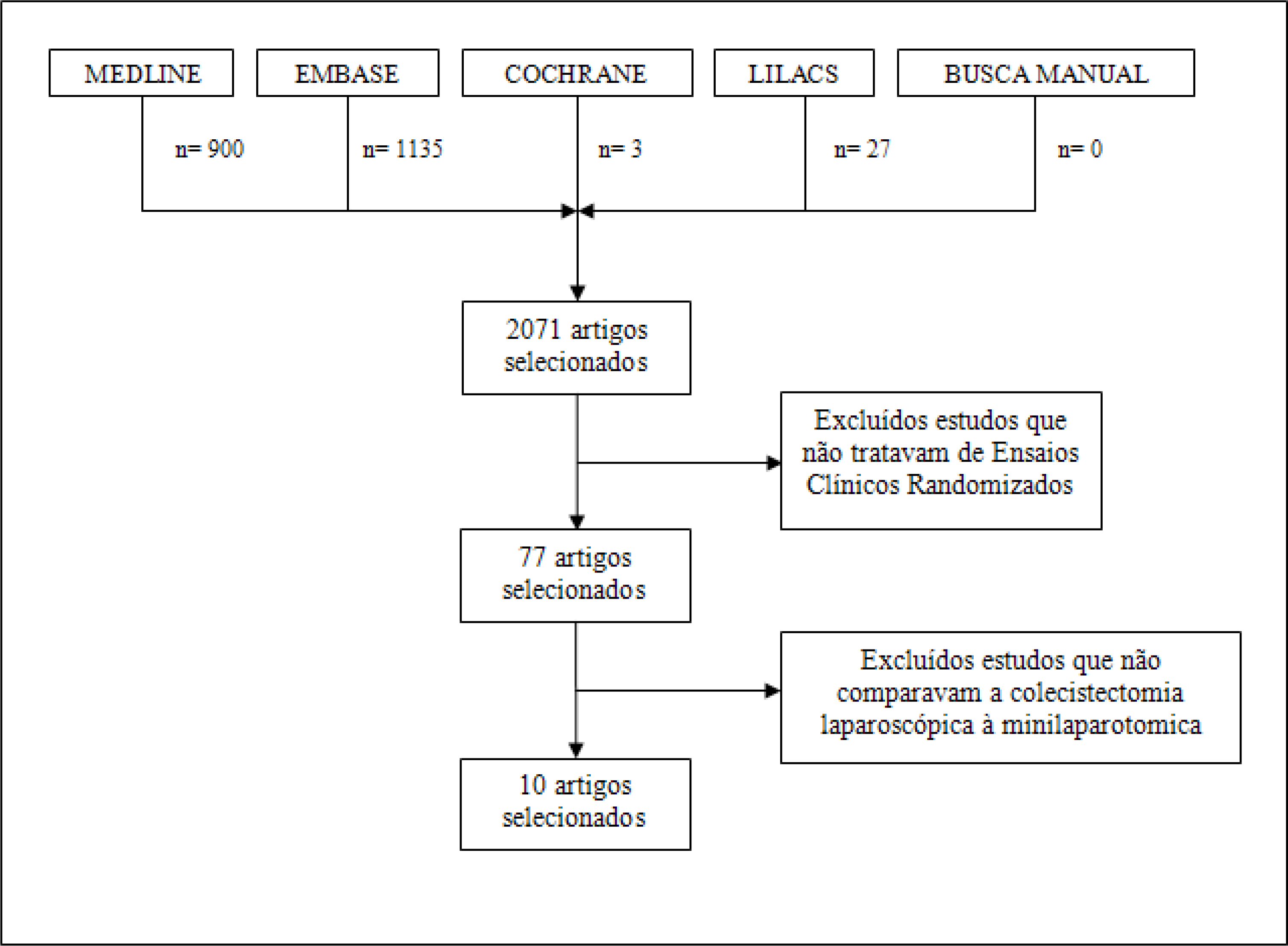