The cystic dilatation of the biliary tract is a rare disease and uncertain origin. It is recognized more frequently in children; however, its incidence comes increasing in adults, representing 20% of the cases.

To evaluate morbimortality rates, evolution and handing of patients with cystic dilatation bile ducts in adults.

Were evaluated, retrospectively, five adults who had the diagnosis of choledochal cyst and that had been submitted to some surgical procedure.

Abdominal pain was the commonest complain to all patients. Jaundice was present in 80%. Ultrasound scanning was done in all the cases as initial examination. CT scan, magnetic resonance imaging and endoscopic retrograde cholangiopancreatography were also done in some patients; however, the diagnosis was established intra-operatively in all cases. The cyst resection with reconstruction of the biliary tract was done in 60%; the cystojejunostomy in 20%; and in 20% biliary tract drainage.

Biliary tract cystic dilatation is a rare disease. However, its incidence is increasing in the adult population, so, it must be thought as differential diagnosis when facing obstructive jaundice.

Choledochal cyst is a dilation of the extra-hepatic biliary tree, and intra-hepatic bile ducts or both11. Abbas HMH, Yassin NA, Ammori BJ. Laparoscopic resection of type I choledochal cyst in an adult and Roux-en-Y. Hepaticojejunostomy: a case report and literature review. Surg Laparosc Endosc Percutan Tech 2006; 16:439-444.. Most cases are diagnosed in children bellow ten years of age, with around 25% being in the first year of life, 80% in the first decade and 20% in adulthood. It is a rare disorder with a higher prevalence in females by a ratio of 4:1 and it is increasingly being diagnosed in adult patients22. Alonso-Lej F, Rever WB, Pessagno DJ. Congenital choledochal cyst, with a report of 2, and an analysis of 94 cases. Int Abstr Surg 1959; 108:1-30.. The incidence of choledochal cyst in the West is between 1:100,000 and 1:190,000 live births, but the disease is much more common in Asia33. Akaraviputh T, Boonnuch W, Watanapa P, Lertakayamanee N, Lohsiriwat D. Surgical management of adult choledochal cysts. J Med Assoc Thai 2005; 88(7):939-43..

Choledochal cyst was first described by Vater & Ezler in 1723 and resection of the cyst by McWhorter in 1924. In 1959 Alonzo-Lej et al. classified the cysts - a classification that was modified by Todani et al. in 1977 - based on the location of the cyst into five types (Figure 1)44. Atkinson HDE, Fischer CP, Jong CHC, Madhavan KK, Parks RW, Garden OJ. Choledochal cysts in adults and their complications. HPB (Oxford) 2003; 5(2):105-110.,55. Balbbitt DP. Congenital choledochal cysts: new etiological concept based on anomalous relationships of the common bile duct and pancreatic bulb. Ann Radiol 1969; 12(3):231-240.. Type I is the classic and most common type, representing on average 85-90% of cases and consists of dilation of the bile duct, which may be cystic, focal or fusiform (subtypes A, B and C respectively). The cystic duct thus generally enters the choledochal cyst and the right and left hepatic ducts, while the intra-hepatic ducts are of normal diameter. Type II is the rarest of all choledochal cysts, accounting for less than 5% of cases. It is described as a simple diverticulum of the extra-hepatic biliary tree. Type III or choledochocele is the cystic dilation of the intraduodenal portion of the extra-hepatic biliary tree. Type IV, subtype A is the second most common type of choledochal cyst, defined as intra- and extra-hepatic dilation. Subtype B involves multiple dilations of the extra-hepatic biliary tree66. Benjamin IS. Biliary cystic disease: the risk of cancer. J Hepatobiliary Pancreat Surg 2003; 10:335-339.,77. Chijiiwa K, Koga A. Surgical management and long-term follow-up of patients with choledochal cysts. Am J Surg 1993; 165:238-242.. Finally, Type V, also known as Caroli's disease, is the cystic dilation of the intra-hepatic biliary system, which may be associated with peri-portal fibrosis and cirrhosis and may be bilobal or confined to a single lobe88. Douglas A. Case of dilation of the common bile duct. Mon J Med 1852; 14:97-100..

The pathogenesis of choledochal cyst remains uncertain, although it is believed that the lesions are congenital in origin and some are diagnosed by way of antenatal ultrasound99. Lipsett PA, Pitt HA. Surgical treatment of choledochal cysts. J Hepatobiliary Pancreat Surg 2003; 10:352-359..

The present study aims to demonstrate the surgical treatment and management of the evolution of patients with cystic dilation of the bile ducts.

A retrospective study was carried out at the General Surgery and Emergency Service of the Restauração Hospital, Recife, PE, Brazil. Patients were included if they had been diagnosed with a bile duct cyst and undergone surgery.

Demographic characteristics, such as age and sex, symptomology, blood biochemistry and imaging examinations were investigated.

The study also covered the type of surgery performed, the classification of the bile duct cyst and post-operative complications.

Five patients who had been diagnosed with and operated for choledochal cyst were enrolled. Four of these were women. The mean age was 30.2 years (22-48). All had been admitted through the emergency service. All patients had complained of abdominal pain. Eighty percent had a history of jaundice and 60% were jaundiced at the time of admission. One patient had a profile of slight cholangitis, another of suppurative cholangitis with liver abscess, and one had abdominal swelling. Three (60%) had previously undergone abdominal surgery (cholecystectomy + removal of roundworms from the bile duct; right paramedian scar - kind of surgery performed unknown; and cholecystectomy + choledocholithotomy).

Diagnosis of cystic disease of the bile duct was established intra-operatively in 100% of cases, despite imaging examinations having been used to evaluate the patients. Three patients underwent resection of the cyst + biliodigestive derivation (two Roux-en-Y hepaticojejunostomies and one Roux-en-Y hepaticogastrojejunostomy). One patient underwent a cystoduodenostomy and one received only palliative measures, such as drainage of a liver abscess and the bile duct.

The patient with a liver abscess died 40 days after surgery and the one who underwent a hepaticojejunostomy was re-operated owing to sub-hepatic buildup. The other patients did not experience major complications. Histopathological analysis confirmed the diagnosis of choledochal cyst in the three patients whose cysts had been resectioned and there was no malignant degeneration (Table 1).

Cystic disease of the bile duct or choledochal cyst was first described by Vater & Elzer in 1723. However, the first full clinical description was produced by Douglas, 18231010. Liu DC, Rodriguez JA, Meric F, Geiger JL. Laparoscopic excision of a rare Type II choledochal cyst: case report and review of the literature. J Pediatr Surg 2000; 35(7):1117-1119.,1111. Shimonishi T, Sasaki M, Nakanuma Y. Precancerous lesions of intrahepatic cholangiocarcinoma. J Hepatobiliary Pancreat Surg 2000;7:542-550.. It is considered a low-incidence disease, affecting between 1:13,000 and 1:2,000 people worldwide and most common in Japan, where two thirds of the cases described in the literature occurred. It can affect people of any age, but is more frequent in children bellow ten years of age and only 20% of cases occur in individuals aged over 20 years. The distribution by sex is 4:1 (women:men).

The main theory regarding the etiology of cystic disease of the bile duct concerns the reflux of pancreatic enzymes into the common bile duct, owing to an anomalous pancreatobiliary junction, i.e. when the join occurs more than 1.5 cm from the hepatoduodenal ampulla. However, this theory does not explain the formation of Type II and Type V cysts, which may have a genetic component1212. Singham J, Schaeffer D, Yoshida E, Scudamore C. Choledochal cysts: analysis of disease pattern and optimal treatment in adult and pediatric patients. HPB (Oxford) 2007; 9(5):383-387..

The classical triad (jaundice, abdominal pain and a palpable mass in the upper right quadrant of the abdomen) is rare in adults, who account for 0-17% of cases. However, in around 85% of children and 25% of adults, at least two elements of the triad are present. Patients may also present initially with cholangitis, pancreatitis or biliary peritonitis through rupture of the cyst.

It is important to note the presence of concomitant malignancy. The incidence of this is higher when diagnosis of cystic disease of the bile duct occurs at a more advanced age: 2% at 20 years and 43% at 60 years. Type I and Type IV cysts are pose the greatest risk of malignant degeneration. Type V poses the least risk (7%)1313. Todani T, Watanabe Y, Narusue M, et al. Congenital bile duct cysts: classification, operative procedures and review of thirty seven cases including cancer arising from choledochal cyst. Am J Surg 1977; 134:263-269..

Ultrasound is the normal triage imaging examination1414. Visser BC, Suh I, Way LW, Kang Sang-MO. Congenital choledochal cysts in adults. Arch Surg 2004; 139:855-862.. Computerized tomography may diagnose a bile duct cyst, but is less accurate than magnetic cholangioresonance and is more useful subsequent to surgery to diagnose stenosis of the bilioenteric anastomosis. Retrograde endoscopic cholangiopancreatography is good for charting the anatomy of the bile duct and thus diagnosing cystic disorders. However, magnetic cholangioresonance provides images that are at least similar, without the risk of complications posed by retrograde endoscopic cholangiopancreatography1515. Yamaguchi M. Congenital choledochal cyst: Analysis of 1433 patients in the Japanese literature. Am J Surg 1980; 140(5):653-657..

Surgical treatment has changed over the years. Previously, the surgical procedure involved a cystoenterostomy. However, in view of postoperative complications, such as cholangitis, pancreatitis and hepatolithiasis (re-operation rate of 70%) and the risk of malignant degeneration of the cyst this procedure is no longer used. At present, the standard treatment involves excision of the cyst and biodigestive derivation1616. Yamaguchi M, Sakurai M, Takeushi S, Awazu S. Observation of cystic dilatation of the common bile duct by ultrasonography. J Pediatr Surg 1980; 15(2):207-210..

There is some controversy regarding treatment of Type IV and Type V cysts1717. Wiseman K, Buczkowski AK, Chung SW, Francoeur J, Schaeffer D, Scudamore CH. Epidemiology, presentation, diagnosis and outcomes of choledochal cysts in adults in an urban environment. The American Journal of Surgery 2005; 189:527-531.. The excision of an extra-hepatic cyst is the rule, but there are doubts as to whether intra-hepatic cysts should be removed or not. The tendency is to carry out a hepatectomy if the cysts are localized. If they are dispersed, this procedure is not possible.

All the patients attended emergency services and presented with symptoms on admission to hospital. All presented with abdominal pain and 60% were jaundiced.

In all cases, the Todani classification was definitively diagnosed only during surgery. There was no pre-operative diagnosis because this is a rare disease and the hypothesis was not suggested by the imaging examinations. In all cases, an ultrasound exam was conducted and no report suggested cystic disease of the bile duct. Neither was this disease suggested in the patient who underwent retrograde endoscopic cholangiopancreatography and magnetic cholangioresonance. As three patients presented with obstructive jaundice, exploration of the bile duct was therefore recommended. One other patient underwent exploratory laparotomy as there was a hypothetical diagnosis of a mesenteric cyst or lymphangioma. The other patient presented with suppurative cholangitis with a liver abscess and underwent emergency surgery.

In the two patients whose cyst was resectioned the reconstruction involved a Roux-en-Y hepaticojejunostomy. The other patient underwent a hepaticogastrojejunostomy, i.e. joining the anastomosis of the jejunum to the stomach and the hepatic duct to the same flap, in order to clear the way for the endoscope to the intra-hepatic bile duct in the case of recurrence of intra-hepatic calculi.

There was no malignant degeneration of the cyst in any of the three cases where histopathological analysis was conducted, nor of the postoperative segment. However, follow-up was of short duration (8-23 months).

Early postoperative complications included infection of the surgical wound in two patients and one reoperation owing to intra-peritoneal buildup of bile. The patient with a liver abscess was operated on two more times and died forty days after the first operation of septic shock. None of the surviving patients developed postoperative pancreatitis, cholangitis or intra-hepatic lithiasis.

Cystic disease of the bile duct is a rare disease in our setting, although it should be considered in the differential diagnosis of obstructive jaundice. Cyst resection with reconstruction of the bile duct is the standard treatment, with a low prevalence of complications and postoperative malignant degeneration. 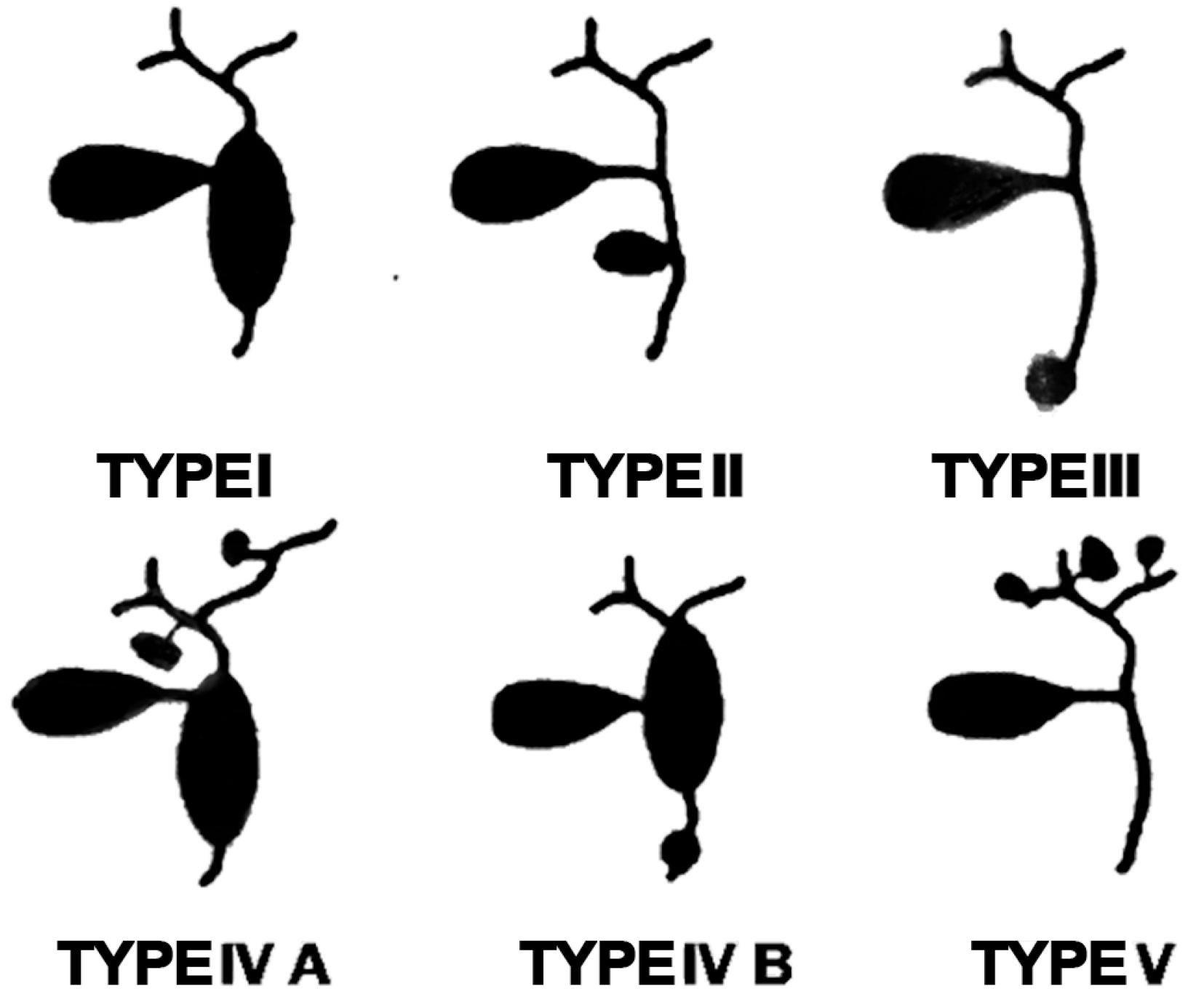