Pseudoxanthoma elasticum (PXE) is a rare, genetic connective tissue disorder with progressive calcification and fragmentation of elastic fibers, which involves the skin, the retina, the cardiovascular system, and the gastrointestinal tract.

We report the histological and ultrastructural findings in a case of a 72-year-old black woman who noticed skin alterations in the cervical region in the third decade of life. Family history revealed no similar cases. On physical examination, we observed a slight thickening of the cervical region with confluent yellowish papules (Figure 1). Other skin folds were not involved. She had no comorbidities. Ophthalmological examination, electrocardiogram, and echocardiogram were normal. A biopsy of the affected area was performed and processed for light microscopy, scanning electron microscopy (SEM), and transmission electron microscopy (TEM).

Hematoxylin-eosin staining showed strong alterations in the mid-dermis, whereas these changes were less intense in the papillary and deep dermis, showing a normal aspect of collagen bundles (Figure 2). Higher magnification of the mid-dermis revealed the presence of eosinophilic irregular clumps and loss of the normal parallel arrangement of collagen bundles (Figure 2). Lower magnification of the samples stained with orcein confirmed the presence of more intense alternations in the mid-dermis, with lighter involvement of the papillary and deep dermis (Figure 3). Higher magnification also revealed that the elastic fibers lost their normal linear configuration, showing clump fragmentation, sometimes forming square structures and some areas of intense accumulation of clumped material (Figure 3). Von Kossa staining showed no calcium deposits. 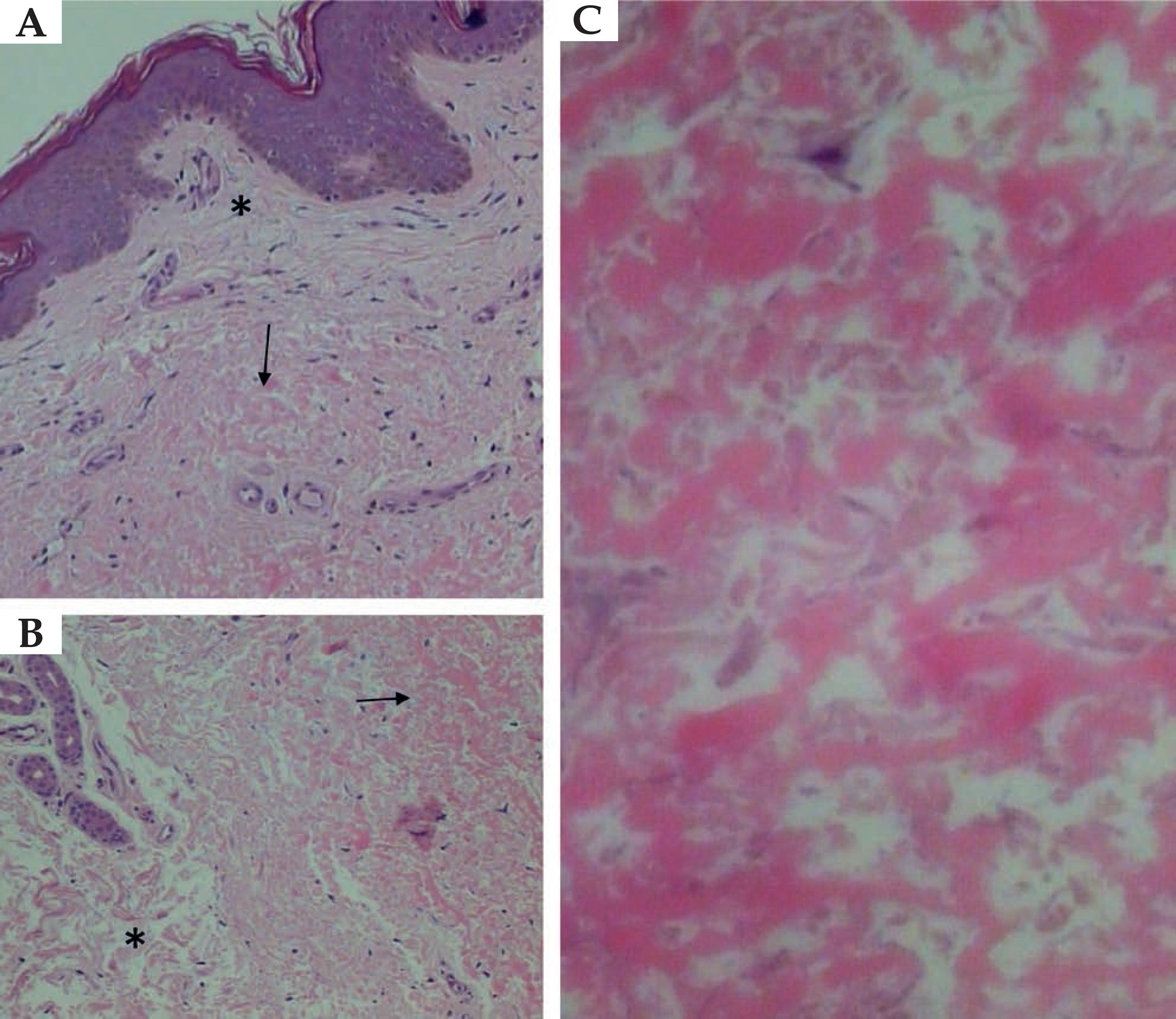 SEM examination of the dermis at low magnification revealed important disorganization of collagen fibers and deposits of small structures measuring around 5 mm associated with bigger stone-like structures ranging from 10-16 mm (Figure 5). In some fields, we could visualize normal aggregations of collagen fibers forming bundles (Figure 5). Observations at higher magnification revealed that these small stone-like structures were sometimes polyhedral-shaped or squared, similar to TEM and HE findings (Figure 5).

The diagnosis is based on clinical and histopathological aspects and on genetic studies.55 Prunier F, Terrien G, Le Corre Y, Apana AL, Bière L, Kauffenstein G, et al. Pseudoxanthoma elasticum: cardiac findings in patients and Abcc6-deficient mouse model. PLoS One. 2013;8:e68700. A skin biopsy is essential for PXE diagnosis because it shows typical histological alterations such as aberrant and fragmented aggregation of elastic fibers in the mid-dermis, which were stained black with orcein in the present case.

This patient showed a mild dermal involvement in a 40-year follow-up. We observed no cardiac and ocular involvement.

Light microscopy confirmed the elastic tissue alteration with fragmentation of elastic fibers. Some areas showed small squared elastic fibers, whereas others revealed intense clumping, which was more conspicuous in the mid-dermis. TEM confirmed the involvement of elastic fibers, which were irregular and clumped, sometimes squared and small. Collagen was secondarily involved, with intense disorganization, but with normal fiber structures. TEM revealed no calcium deposition according to von Kossa staining.

SEM also demonstrated intense disorganization of collagen, with occasional bundle formation. The deposition of small structures around 5 mm and bigger ones ranging from 10-16 µm among the collagen fibers was an impressive finding, which should represent the aberrant elastic fibers seen with TEM and light microscopy. These examinations also revealed smaller and bigger structures in a bidimensional manner.

There is little information about PXE ultrastructure in the literature. Most authors report cases of fragmentation of elastic fibers.77 Hausser I, Anton-Lamprecht I. Early preclinical diagnosis of dominant pseudoxanthoma elasticum by specific ultrastructural changes of dermal elastic and collagen tissue in a family at risk. Hum Genet. 1991;87:693-700.

Our findings showed important deposition of stone-like structures, which should represent the altered elastic fibers seen in TEM. The ultrastructural aspects of this case contributes with additional information about the elastic tissue involvement in PXE.

This is an Open Access article distributed under the terms of the Creative Commons Attribution Non-Commercial License which permits unrestricted non-commercial use, distribution, and reproduction in any medium provided the original work is properly cited.