The use of isotretinoin in treating sebaceous hyperplasia is justified by its effectiveness in reducing the size of the sebaceous gland, in addition to its action in diminishing the proliferation of basal sebocytes, suppressing the production of sebum and inhibiting the differentiation of the sebocytes in vivo.55 Orfanos CE, Zouboulis CC. Oral retinoids in the treatment of seborrhoea and acne. Dermatology. 1998;196:140-7.

Several papers have studied the mechanism of the retinoids' anti-sebotropic effect. Some research lines attempt to explain its sebo-supressive action by studying the apoptosis of the sebocytes, while others hold that the answer lies in the interaction of isotretinoin in the metabolism of the androgens.77 Nelson AM, Zhao W, Gilliland KL, Zaenglein AL, Liu W, Thiboutot DM. Neutrophil gelatinase-associated lipocalin mediates 13-cis retinoic acid-induced apoptosis of human sebaceous gland cells. J Clin Invest. 2008;118:1468-78.,88 Torma H. Interaction of isotretinoin with endogenous retinoids. J Am Acad Dermatol. 2001;45:S143-9.

However, our bibliographical review did not identify any clinical essays performed with patients whose sebaceous hyperplasia had been treated with systemic isotretinoin.

Isotretinoin is known to be an inhibitor of the size and function of sebaceous glands.1010 Hommel L, Geiger JM, Harms M, Saurat JH. Sebum excretion rate in subjects treated with oral all-trans-retinoic acid. Dermatology. 1996;193:127-30. As it has been used for over two decades to treat acne, there exists vast knowledge about its administration and, especially, its side effects.1212 Meigel WN. How safe is oral isotretinoin? Dermatology. 1997;195:22-8.

In the few papers identified that discuss its use in sebaceous hyperplasia, isotretinoin was used in low doses on a small number of patients, who were generally monitored for only 2 months.44 Grekin RC, Ellis CN. Isotretinoin for the treatment of sebaceous hyperplasia. Cutis. 1984;34:90-2. This casts doubt over the lesion recurrence rate after the end of therapy mentioned in those studies.

In practice, it is known that decreasing the dosage of isotretinoin in treating acne can provoke a higher number of relapses, although some papers on dosage reduction to minimize side effects have reported low recurrence.1313 Amichai B, Shemer A, Grunwald MH. Low-dose isotretinoin in the treatment of acne vulgaris. J Am Acad Dermatol. 2006 Apr;54(4):644-6.

In this clinical trial, therapy entailed a monthly dosage similar to that normally used in acne treatment, though for a shorter duration. The protocol adopted was isotretinoin at a dosage of 1 mg/kg/day, for two months).

Firstly, 20 patients were selected for the clinical trial according to the following criteria:

Exclusion criteria: under 18 years old, pregnant women or women at childbearing age who do not practice contraception, patients with dyslipidemia and/or altered liver function.

However , the number was decreased to 20 patients because some patients could not tolerate the side effects of mucosa and skin dryness and subsequently abandoned the treatment or reduced drug doses themselves. They were excluded from the group; some were monitored in parallel to the study, while others were lost during follow-up. Since results were very similar in all the individuals examined, there was no statistical requirement to increase the number, as this would merely have repeated the previously obtained results.

All selected patients signed an informed consent form, duly approved by the Research Ethics Committee at UNIFESP. There were no conflicts of interest in the study.

Patients' skin lesions were counted and photographed before and after treatment. They were monitored for two years after the end of treatment in order to evaluate the rate of recurring lesions and be photographed again. Five patients did not return after the two years for a recount of lesions. The side effects of the drug were also evaluated.

Variations were analyzed at two different points: after two months and after two years of isotretinoin treatment. In the two-year evaluation, we worked with n=15, since five patients did not return for monitoring. Throughout this assessment, we used the Wilcoxon signed-rank test, as patients were observed at three particular moments (the beginning plus the two other analysis points), and because the difference between the number of lesions at the moments analyzed did not approach a normal distribution (Gaussian). A confidence level of p<0.05 was adopted.

We monitored patients for two years after the end of treatment in order to assess the rates of recurring lesions.

The period of isotretinoin use was effective as regards the reduction in hyperplasia lesions, thus corroborating the literature reviewed, in which sub-doses of the medication were effectual at diminishing the size of the sabeceous gland.1313 Amichai B, Shemer A, Grunwald MH. Low-dose isotretinoin in the treatment of acne vulgaris. J Am Acad Dermatol. 2006 Apr;54(4):644-6.

Our study has shown that 100% of the patients saw a significant decrease in the number of sebaceous hyperplasia lesions in response to treatment. Furthermore, note was taken of the fast therapeutic action of systemic isotretinoin (Figures 1 to 6). 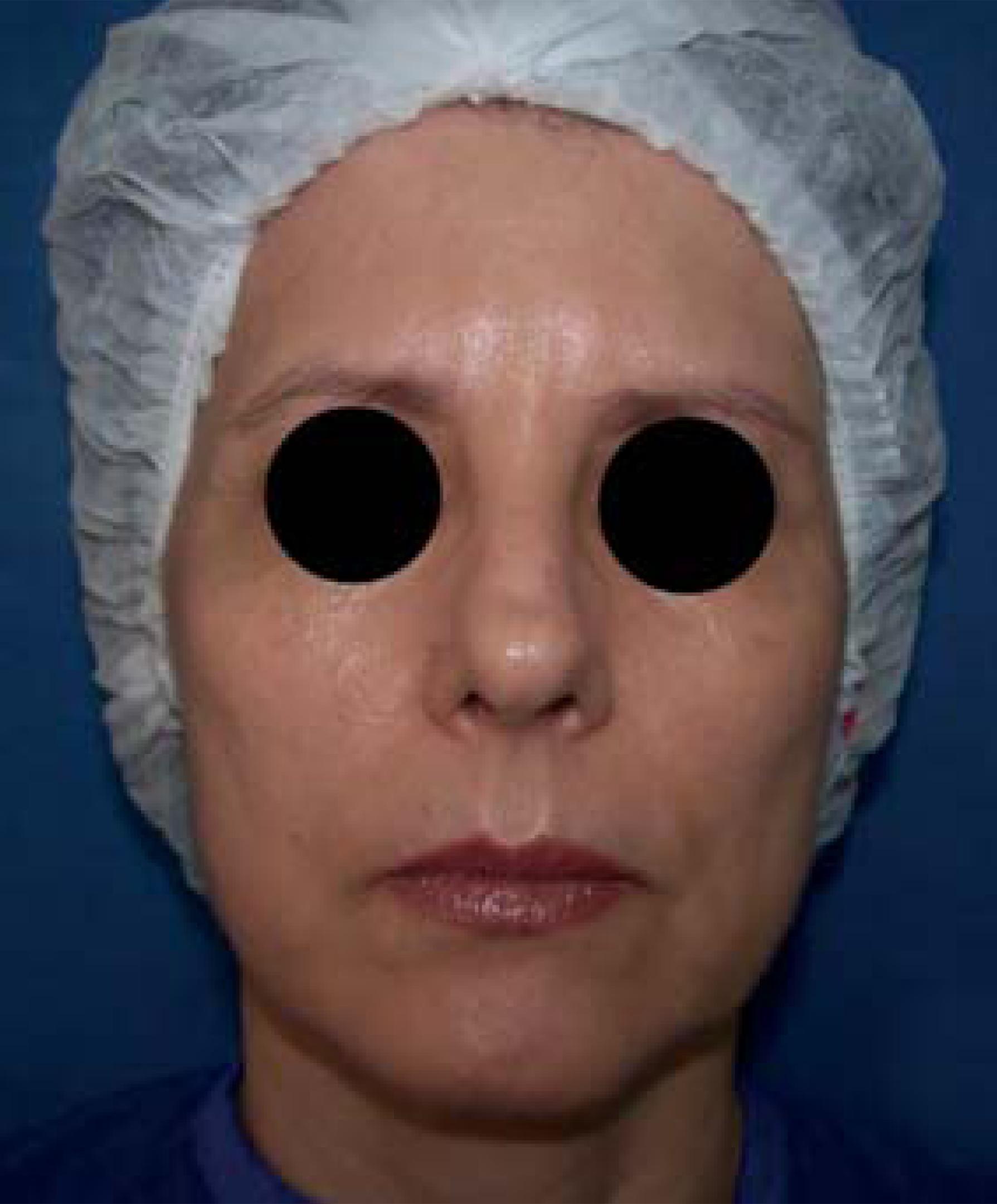 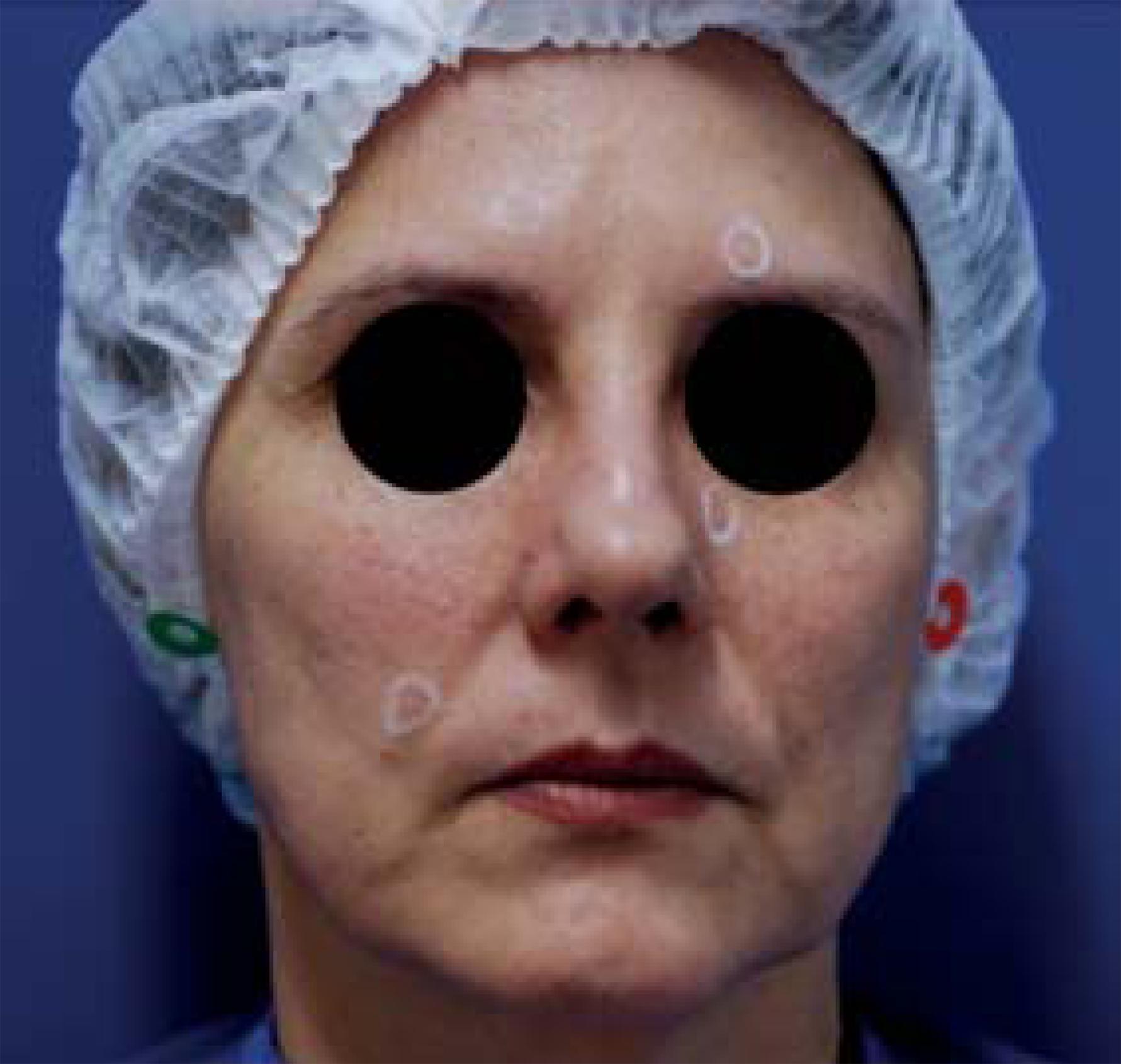 The data analyzed demonstrated that, when evaluating the patients at the three stages of the study (before treatment, after two months of therapy and two years without it), there was a reduction in the average of 24 lesions (when monitoring first began) to 2 lesions (at two months of treatment). Importantly, all patients experienced a reduction in the number of lesions and even complete resolution in some cases.

When comparing results two years after the end of treatment, we noted few recurring hyperplasia lesions, with an average of 4 lesions. During the same periods, the median number of lesions decreased from 22 (i.e. 50% of the patients had over 22 lesions, while 50% had under 22) to zero, following two months' treatment. Equally, two years on from the end of medication use, there was an increase from the median of zero to three. This increase is statistically significant, but is of little clinical importance to most patients, since, despite recurrences in some patients, they still invariably had fewer lesions two years later than they did prior to initiating treatment (Table 1).

NB.: There was evidence of a significant statistical difference between the number of lesions at the two moments evaluated.

As regards side effects, use of a recognized drug ensured safety for its administration. In particular, we observed dryness of the skin and mucosa, which were expected, given our experience with its use in acne therapy and the literature consulted about the drug.55 Orfanos CE, Zouboulis CC. Oral retinoids in the treatment of seborrhoea and acne. Dermatology. 1998;196:140-7.,1414 Torrelo A, Pastor MA, Zambrano A. Severe acne infantum successfully treated with isotretinoin. Pediatr.Dermatol. 2005;22:357-59. During the short treatment with isotretinoin, there was only one case where triglyceride levels rose, which was addressed with monthly serum dosages of circulating fats, leading to the return to basal levels one month after the end of the protocol, along with dietary reorientation.

Cosmetic improvement in skin through using the medication, involving a reduction in blemishes and softening of fine wrinkles, has been reported by most patients, in line with our experience and the literature reviewed.1515 Hernandez-Perez E, Khawaja HA, Alvarez TY. Oral isotretinoin as part of the treatment of cutaneous aging. Dermatol Surg. 2000;26:649-52.

It was surprising to observe the maintenance of the therapeutic result for two years after the end of the treatment, with few recurring lesions. Given the short length of treatment (two months), we expected a larger number of lesions after that period, since recurrence rates are reported to be around 19%, even in prolonged acne treatment.1717 Ghalamkarpour F, Nasiri S. Isotretinoin in treatment of acne: its efficacy, side effects, and recurrence rate of disease. Arch Iran Med. 2006;9:228-30.

Although we obtained 100% effectiveness regarding the decrease in lesions, it is important to highlight that new studies are necessary for better standardization of dosage and treatment length.

We propose new research protocols with the aim of revealing the minimum dosage necessary for hyperplasia resolution, as we believe that the dosage of 1mg/kg/day for two months will not be necessary, since, during treatment, patients already showed a decrease in the number and size of lesions before completing the sixty days of proposed therapy. Some patients, who were subsequently excluded from this study, reduced the medication dosage themselves and achieved similar results to those who followed the protocol correctly.

Consequently, standardizing smaller doses promotes isotretinoin use in sebaceous hyperplasia treatment, due to the reduced costs and side effects, which are, as seen in literature, dosage-dependent.55 Orfanos CE, Zouboulis CC. Oral retinoids in the treatment of seborrhoea and acne. Dermatology. 1998;196:140-7.,1414 Torrelo A, Pastor MA, Zambrano A. Severe acne infantum successfully treated with isotretinoin. Pediatr.Dermatol. 2005;22:357-59.,1818 Kunynetz RA. A review of systemic retinoid therapy for acne and related conditions. Skin Therapy Lett. 2004;9:1-4.

Ultimately, we were able to confirm that systemic isotretinoin use is an effective procedure in treating cutaneous sabeceous hyperplasia.

Thumbnail
FIGURE 6
Two years after treatment: 4 lesions
Thumbnail
TABLE 1
Comparison of the number of lesions at the three stages of study