Dermoscopy of Bowen's disease: pigmented variant on the penis

Pigmented Bowen's disease (PBD) is a variant of squamous cell carcinoma in situ and represents less than 2% of cases of Bowen's disease. It is characterized by a sharply demarcated, pigmented plaque with a scaly or crusted surface on intertriginous and genital areas. The authors describe a case of PBD on the penis and analyze the dermoscopic aspects of this type of lesion.

Pigmented Bowen's disease (PBD) is a variant of squamous cell carcinoma in situ and represents less than 2% of cases of Bowen's disease. It is characterized by a sharply demarcated, pigmented plaque with a scaly or crusted surface on intertriginous and genital areas. The authors describe a case of PBD on the penis and analyze the dermoscopic aspects of this type of lesion.

The pigmented variant of BD is characterized by the presence of abundant melanin pigment in the cytoplasm of atypical keratinocytes, namely, in the basal layer, due to hyperfunction and a slight increase in the number of melanocytes, which are typical. In addition, it is characterized by the presence of melanophages in the papillary dermis, associated with histological features of squamous cell carcinoma in situ. Little is known about the mechanism of pigmentation of BD. Neoplastic cells are considered to be capable of producing cytokines that induce melanocyte proliferation and melanin production. Hyperpigmentation of anogenital PBD may result from elevated temperature or simply from the more pronounced pigmentation usually found in this region. 3

The authors describe dermoscopic aspects of PBD on the penis of a 50-year-old Caucasian male (Figure 1).

The dermoscopic pattern of melanocytic nevi on this region is characterized by the presence of pigment network, globules, and streaks. Lentigines present a fine, delicate, and regular network. Dermoscopy of hypermelanosis on the mucosa presents a homogeneous brown area or fine regular lines in a parallel pattern. Occasionally, it may mimic the dermoscopy of a melanoma. In these cases, mucosal melanosis presents variegated pigmentation asymmetry of structures and irregular borders. Melanoma of the penis is rare and accounts for 0.2% of all cutaneous melanomas. Dermoscopy of this melanoma is characterized by irregular pigmentation, linear vascular structures, multicomponent pattern, presence of veil, streaks, and regression structures. 4-6

Dermoscopic appearance of BD was firstly described in 2004 by Argenziano et al.,7 who observed that the presence of glomerular vessels was a suggestive finding of BD. More recently, the presence of structureless, hypopigmented areas with brown or gray dots arranged in linear fashion and glomerular vessels, also arranged in linear fashion, was described as a suggestive finding of PBD (Table 1). 8

An excisional biopsy was performed, and its pathological report revealed pigmented squamous cell carcinoma in situ (pigmented Bowen's disease), characterized by remarkable atypia and anaplasia of cells from the mucous malpighian body with cellular loss of polarity and presence of some dyskeratotic cells, besides a pronounced, irregular increase in melanin pigmentation in keratinocytes, both in the basal and squamous layers. Melanocytes slightly increased in number with clear dendrites and thickened granular, cornified layers were also observed (Figure 3 and 4). 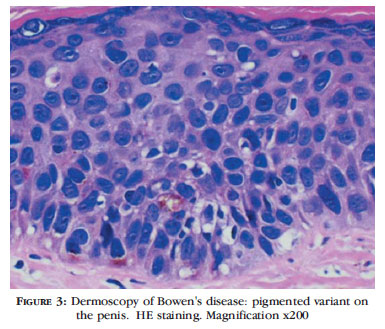 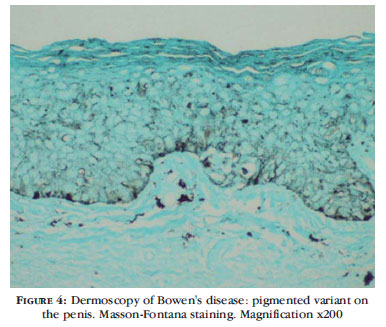 BD is defined as a form of squamous cell carcinoma in situ. It is a distinct clinicopathologic entity of the skin and mucocutaneous junction.

PBD commonly presents as a hyperpigmented, sharply demarcated plaque with a surface that may be velvety, verrucous, or flat and affects intertriginous and genital areas. Scaling and erosions may be present as well. The lesions are generally asymptomatic; however, they may cause pruritus or burning pain.

Erythroplasia de Queyrat usually presents as one or more red, moist plaques on the mucosal surfaces of the glans, which may spread to the inner aspect of the prepuce.

Genital Bowen's disease and Erythroplasia de Queyrat are usually found in elderly men, being present on the follicle bearing skin and the mucosa of the penis (glans or prepuce), respectively. 9-10

In the case described, the patient presented a dark brown plaque on the glans and prepuce. Due to the clinical and pathological characteristics of the lesion, the authors decided to classify it as pigmented Bowen's disease.

The authors emphasize the importance of using a dermoscope to diagnose suspicious pigmented lesions and reinforce the relevance of its use in the differential diagnosis with melanoma and hypermelanosis.

Approved by the Advisory Board and accepted for publication on 16.11.2011.