This is a case report followed by a short review of literature of apocrine hidrocystomas. A 67 year old lady came to this clinic with multiple translucent, asymptomatic papulocystic lesions on the face which got worse in summer. A biopsy showed a single cystic cavity lined by two layers of small cuboial epithelial cells was seen. Apocrine differentiation characterised by decapitation secretion was seen. A diagnosis of multiple apocrine hidrocystomas was made. Treatment can be attempted with individual excision of lesions or lasers. Topical atropine and scopolamine too have been tried with variable success. Our patient did not wish any treatment once the benign nature of the condition was confirmed.

This is a case report followed by a short review of literature of apocrine hidrocystomas. A 67 year old lady came to this clinic with multiple translucent, asymptomatic papulocystic lesions on the face which got worse in summer. A biopsy showed a single cystic cavity lined by two layers of small cuboial epithelial cells was seen.

Apocrine differentiation characterised by decapitation secretion was seen. A diagnosis of multiple apocrine hidrocystomas was made.

Treatment can be attempted with individual excision of lesions or lasers. Topical atropine and scopolamine too have been tried with variable success. Our patient did not wish any treatment once the benign nature of the condition was confirmed.

A 67 year old lady presented to this clinic with multiple small, 1-3 mm translucent, dome shaped, smooth surfaced, asymptomatic papules located on the face for the past 7 years which were more noticeable during summers. (Figure 1) She was bothered about them only from the cosmetic point of view. She had taken two consultations previously with a diagnosis of mollucscum contagiosum and acneform lesions due to some moisturizer that she was applying regularly. She had been applying tretinoin off and on for the past one year without any effect. She was otherwise healthy with no other problems. She had no past history of acne, any systemic illnesses; she was not on any drug except amlodipine for hypertension. Hematological and biochemical profile was normal. The patient was given various options for treatment which she refused after being assured of the benign nature of the disease.

A biopsy was performed which showed two cystic cavities within the superficial and mid dermis. (Figure 2) One of them was lined by two layers of cuboidal secretory epithelial cells resembling cells of the apocrine secretory coil.(Figure 3, 4) The apocrine cells had rather abundant, finely granular pink cytoplasm. Pinching off of the cytoplasm with intraluminal secretion was seen. (Depcapitation secretion) The cyst was bound by myoepithelial cells. The other cyst was lined by attenuated epithelium. Diagnosis of apocrine hidrocystoma was made. Since confusion between hidrocystomas of apocrine and eccrine origin is known to occur S100 staining was done which was positive confirming the diagnosis of multiple apocrine hidrocystomas.

Apocrine hidrocystomas are benign cystic tumors of the apocrine sweat glands. Though there are some references of multiple apocrine hidrocystomas in the literature the most common presentation is a solitary lesion which is very frequently located near the eye.1,2,3 Multiple hidrocystomas are known as Robinson variant and are found most often on the face in middle aged women.1 They are known to be localized to the periorbital areas and the cheeks. Very rarely they are documented to be on chest, shoulder, axilla, penis and anus.1,2,3 Similar lesions on the eyelids are known as Molls gland cysts. It is interesting to note they are rarely present in areas which are rich in apocrine glands.1 The true incidence may not be known accurately because many times they are seen in ophthalmology or surgery clinics.3 They have equal sex incidence. They are dome shaped, may be transparent, translucent or even bluish black which is supposed to be due to Tyndal effect. Solitary AH have no seasonal variations but multiple lesions have seasonal variations like eccrine hidrocystomas which tend to appear more in hot and humid weather.

Apocrine hidrocystomas are characterized by a large unilocular or multilocular cystic space in the dermis. It has a lining consisting of a double layer of epithelial cells.1,2 The outer layer comprises flattened vacuolated myoepithelial cells and inner layer comprises tall columnar or cuboidal cells with eosinophilic cytoplasm and round or oval vesicular nuclei at the base of these cells. Decapitation secretion is a hallmark of apocrine hidrocystoma.1,2,3 PAS positive granules may be seen in the cytoplasm of the inner lining cells. About half the lesions show papillary projections growing into the central cavity.

They are S100 positive whereas eccrine hidrocystomas are negative.

It is often difficult to discern apocrine from eccrine hidrocystomas.1,2 This happens because the epithelial lining of the apocrine hidrocystoma tends to get atrophied following distension of the cyst with secretions. Eccrine hidrocystomas are thought to be cystic dilatations of the sweat duct. Since the ducts of both eccrine as well as apocrine sweat glands are identical people have proposed the term ductal hidrocystoma. 1 Recently apocrine ducts have been documented to express human milk fat globulin 1 (HMFG 1) and eccrine ducts are negative for this protein.1 It is important to differentiate these lesions from other benign cystic lesions occurring on the face like inclusion cysts, mucoid cysts. A solitary hidrocystoma may be misdiagnosed as a cystic basal cell carcinoma. A pigmented hidrocystoma may be similarly wrongly diagnosed suspected to be a melanoma. That makes biopsy a very useful tool before embarking on any surgery so that they are documented before removing them.

Goltz-Gorlin (also known as Jessner-Cole syndrome or focal dermal hypoplasia) occurs sporadically, with few familial cases having X-linked dominant transmission; it is usually seen in females. Its main features are microcephaly, midfacial hypoplasia, malformed ears, microphthalmia, periocular multiple hidrocystomas, papillomas of the lip, tongue, anus, and axilla, skeletal abnormalities and mental retardation. 2 Schopf-Schulz-Passarge is an autosomal recessive syndrome where the main features are multiple apocrine hidrocystomas of the eyelids, palmoplantar hyperkeratosis, hypodontia, and hypotrichosis. There is often associated hypotrichosis, cysts on the eyelids, and multiple apocrine hidrocystomas near the eyes.1,2 Graves disease with its associated hyperhidrosis has also been associated with multiple eccrine hidrocystomas.2 The lesions of apocrine hidrocystomas in such cases tend to resolve upon treatment for hyperthyroidism.

Simple needle puncture is often done for a solitary lesion of hidrocystoma.2 It is also easily treated with simple excision. 3,4,5,6 Multiple apocrine hidrocystomas are rare and should always be biopsied to confirm the diagnosis.2 They do not respond well to simple needle punctures as they are found to recur after a few weeks and in such cases electrodesiccation is found to be effective.2,4 Anticholinergic creams like atropine and scopolamine have been used with variable success but the anticholinergic effects can be quite uncomfortable for some patients.1 Trichloracetic acid, carbon-dioxide laser, and 1450-nm diode laser have been employed. Additional therapies to consider are those which are also used for multiple eccrine hidrocystomas, like botulinum toxin, pulsed-dye laser, and most recently the 595 nm long-pulsed laser.2

1. Apocrine hidrocystomas are benign cystic lesions and are usually found on the face of middle aged and elderly women. Solitary lesions are found on the eyelid

2. Histologically they are characterized by unilocular or multilocular cysts which are lined by a double lining of epithelium with the outer layer consisting of myoepithelial cells and inner layer consisting of tall columnar or cuboidal cells. Decapitation secretion is a hallmark of apocrine glands.

4. These are rare tumors and a biopsy is mandatory. Immunohistochemical study for S100 positivity is suggestive of apocrine hidrocystomas but is a controversial issue in literature.

5. Simple needle puncture or excision suffices for a solitary apocrine hidrocystoma whereas electrocauterisation, excision, carbon dioxide laser, 1450 nm diode laser, 595 nm long pulsed laser have all been tried in treatment of these lesions with varying success.

I thank Dr. Uday Khopkar for his histological input. 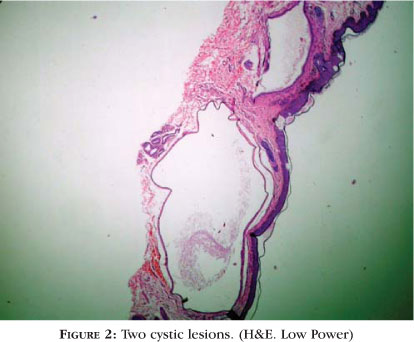 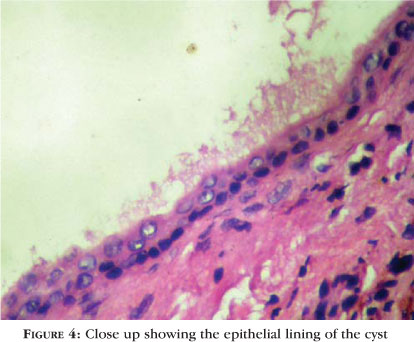