OBJECTIVE: To evaluate the effectiveness of adding vildagliptin to the treatment of patients with inadequately controlled type 2 diabetes mellitus (T2DM) treated with a combination of metformin and a sulphonylurea. SUBJECTS AND METHODS: 37 T2DM patients with HbA1c ranging from 7.7% to 12.4% (mean of 9.30 ± 1.38), despite the use of metformin in combination with a sulphonylurea, were additionally treated with vildagliptin (100 mg/day) for at least 6 months. RESULTS: During triple oral therapy (TOT) HbA1c levels < 7% were achieved in 11 patients (29.7%), whereas levels of fasting plasma glucose (FPG) < 120 mg/dL were observed in 12 patients (32.4%). Both findings were observed in 10 patients (27.0%). Compared to nonresponsive subjects, lower mean baseline HbA1c and FPG levels were seen in responsive patients, but the difference was only statistically significant for fasting plasma glucose (FPG). Moreover, there was considerable overlap between the two groups. CONLUSION: Our preliminary results suggest that TOT with metformin, a sulphonylurea and vildagliptin may be useful for some T2DM patients nonresponsive to combination therapy with metformin and sulphonylurea.

ICenter for Diabetes and Endocrinology of Pernambuco, Recife, PE, Brazil

OBJECTIVE: To evaluate the effectiveness of adding vildagliptin to the treatment of patients with inadequately controlled type 2 diabetes mellitus (T2DM) treated with a combination of metformin and a sulphonylurea.

RESULTS: During triple oral therapy (TOT) HbA1c levels < 7% were achieved in 11 patients (29.7%), whereas levels of fasting plasma glucose (FPG) < 120 mg/dL were observed in 12 patients (32.4%). Both findings were observed in 10 patients (27.0%). Compared to nonresponsive subjects, lower mean baseline HbA1c and FPG levels were seen in responsive patients, but the difference was only statistically significant for fasting plasma glucose (FPG). Moreover, there was considerable overlap between the two groups.

The main pathophysiologic mechanisms of hyperglycemia in type 2 diabetic patients involve insulin resistance, impaired insulin secretion, and increased hepatic glucose output (1-3). It was also shown that glucagon-like peptide 1 (GLP-1) deficiency is another key component of type 2 diabetes (T2DM) pathogenesis (4,5). This incretin is a naturally occurring hormone that is released from gut cells in response to food. Once in the circulation, GLP-1 has a half-life of less than 2 minutes, due to rapid degradation by the enzyme dipeptidyl peptidase-4 (DPP-4). GLP-1 is a potent antihyperglycemic hormone, inducing glucose-dependent stimulation of insulin secretion by beta cells, while suppressing glucagon secretion by pancreatic alpha cells (1,4-6).

The three main options among oral glucose-lowering drugs are metformin, sulphonylureas and thiazolidinediones (TZDs) (7-10). More recently, DPP-4 inhibitors, such as vildagliptin, sitagliptin and saxagliptin, became commercially available (11-13). All these drugs may be used as monotherapy, but most patients with type 2 diabetes will eventually require a combination of two or more antidiabetic agents in order to achieve adequate glycemic control (14-16). The most commonly used triple oral therapy includes the combination of metformin with a sulphonylurea and a TZD (7,16). A triple oral combination including a DPP-4 inhibitor would have several theoretical advantages but, at present, it has not been supported by any published trial.

The aim of the present study was to assess the effectiveness of adding vildagliptin to the treatment of patients with type 2 diabetes without appropriate glycemic control, despite the use of combination therapy with metformin and a sulphonylurea.

Thirty seven patients (21 women and 16 men; mean age, 45.3 ± 5.5 years; age range, 38-58) with type 2 diabetes were included in this prospective open trial. Patients were selected from outpatients in the Center for Diabetes and Endocrinology of Pernambuco, Recife, Brazil. The main inclusion criterion was poor glycemic control (glycated hemoglobin [HbA1c] > 7.0%), despite the combination therapy with metformin and a sulphonylurea.

The study was performed in accordance with the declaration of Helsinki, and was approved by the local ethics committee. All participants provided informed consent before enrolling in the study.

The main objective of the current study was to evaluate the efficacy of adding vildagliptin to patients with type 2 diabetes without appropriate glycemic control, despite the use of combination therapy with metformin and a sulphonylurea. Vildagliptin (100 mg/day) was prescribed for at least 6 months to patients whose combination therapy with metformin (1,700-2,550 mg/ day) and a sulphonylurea − either gliclazide MR (30-90 mg/dia), glibenclamide (10-20 mg/day) or glimepiride (4 mg/day) − was not able to maintain HbA1c levels < 7%.Patients who achieved HbA1c levels < 7% after the addition of vildagliptin were labeled responsive, whereas those who did not were considered nonresponsive.

Body mass index (BMI), fasting plasma glucose (FPG) and HbA1c were evaluated at baseline and every three months afterwards. All plasmatic parameters were determined after a 12-hour overnight fast. Venous blood samples were collected from all patients between 8 a.m. and 9 a.m. Plasma glucose was measured by an immunoturbidimetric method using a commercial kit (Selectra Merck), with intra- and inter-assay coefficients of variation (CV) < 2%. HbA1c levels were measured by high-performance liquid chromatography (DIAMAT, Bio-Rad, USA; normal values, 4.0%-6.0%), with intraand inter-assay CV < 2%. BMI were calculated as weight in kilograms divided by the square of height in meters.

Characteristics of the patients

Vildagliptin is a new oral antidiabetic drug that acts as a potent and selective inhibitor of DPP-4, the enzyme responsible for the rapid degradation of circulating GLP-1 (7,12,13). Early studies suggested that vilgagliptin improves islet function in patients with type 2 diabetes by increasing both α- and β-cells responsiveness to glucose (17,18). Vildagliptin may be used as monotherapy, but better results are found when it is combined with metformin (12,13). Recent studies have shown that, as add-on therapy in patients with inadequately controlled T2DM treated with metformin, vildagliptin was as effective as TZDs (19) and sulphonylureas (20,21). In the present study, we observed that addition of vildagliptin to an unsuccessful combination of metformin with sulphonylurea was able to reduce HbA1c to < 7.0% in 29.7% of patients with T2DM.

According to the guidelines of the American Diabetes Association (ADA), metformin should be started together with lifestyle interventions in the management of type 2 diabetic patients, unless contraindicated (9,15). When a second drug is needed, most endocrinologists will choose a sulphonylurea (7,16). TZDs and DPP-4 inhibitors are other options (9,13). The most commonly used triple oral therapy includes the combination of metformin with a sulphonylurea and a TZD (7,9,16,22). This treatment regimen is more likely to be successful when HbA1c levels are < 9.5% before the addition of the third drug (7,16,22,23).

Rosenstock and cols. (23) evaluated the efficacy and safety of add-on insulin glargine versus rosiglitazone in 217 insulin-naïve patients with inadequately controlled type 2 diabetes on dual oral therapy with sulfonylurea and metformin (HbA1c 7.5%-11%). At the end of the study, HbA1c was reduced by 1.66% from baseline in the insulin glargine group, and by 1.51% in the rosiglitazone group, with no significant difference between the groups (p = 0.1446). In patients with HbA1c < 9.5% there was no significant difference between treatment groups (p = 0.87). However, glargine resulted in significantly greater HbA1c reduction compared with rosiglitazone, when baseline HbA1c levels were > 9.5% (p = 0.05). Overall, HbA1c of < 7% was achieved in 48% of insulin glargine-treated patients, and 49% of rosiglitazone-treated patients (23).

Potential advantages of DPP-4 inhibitors over TZDs include a neutral effect on body weight and better tolerability profile, without fluid retention, peripheral edema, and cardiovascular, hematological or osteometabolic adverse events (7,11-13,24). Conversely, in clinical trials, the incidence of TZDs-associated edema varied from about 3.0% to 7.5%, compared with 1.0% to 2.5% with placebo or other oral glucose-lowering agents (25). Weight gain induced by TZDs is usually modest (mean of 3.6 kg) but it may be excessive, leading to discontinuation of treatment (26). TZDs are also associated with an increased incidence of fractures in women, and perhaps in men (15,27,28). Large trials, such as RECORD (26) and PROactive (26), showed that the use of TZDs results in a twofold increased risk for congestive heart failure. Moreover, two meta-analyses have suggested a 30%-40% relative increase in risk for myocardium infarction in type 2 diabetic patients treated with rosiglitazone (29,30). In the RECORD study, a non-statistically significant increased risk for myocardium infarction was noted in the rosiglitazone group (HR 1.14, 0.80-1.63) (28). Nevertheless, low event rates might have precluded statistical confirmation of significant risk, if present. Also, rosiglitazone therapy was associated with higher LDL-c levels, leading to an increased use of statins in the rosiglitazone group, which might have reduced the incidence of cardiovascular events (31). Finally, TZDs are about 3 percent more likely to cause anemia (hematocrit drop of 1-3 percent) than the other oral hypoglycemic agents (7,25). Rosiglitazone was recently removed from the market in Brazil, Europe and the USA.

In our study, compared to nonresponsive subjects, responsive patients (those who achieved HbA1c levels < 7% after the addition of vildagliptin) had lower baseline fasting plasma glucose and HbA1c levels. However, the difference was only statistically significant for fasting plasma glucose. Moreover, there was considerable overlap between the two groups, which prevented the prediction of which patients would be responsive to triple oral therapy. Finally, the rate of responsive patients was apparently not influenced by BMI, sex, and time from T2DM diagnosis.

A likely limitation of our study is the small number of patients evaluated. However, to the best of our knowledge, this is first published trial that assessed triple oral therapy for T2DM with a DPP-4 inhibitor.

In conclusion, our preliminary results demonstrated that triple oral therapy with metformin, a sulphonylurea and vildagliptin may be an appropriate approach for some type 2 diabetic patients who are irresponsive to the combination of metformin with a sulfonylurea. BMI and time from diagnosis of type 2 diabetes mellitus apparently do not influence responsiveness to triple oral therapy. However, further studies with a larger number of patients are needed on the subject. 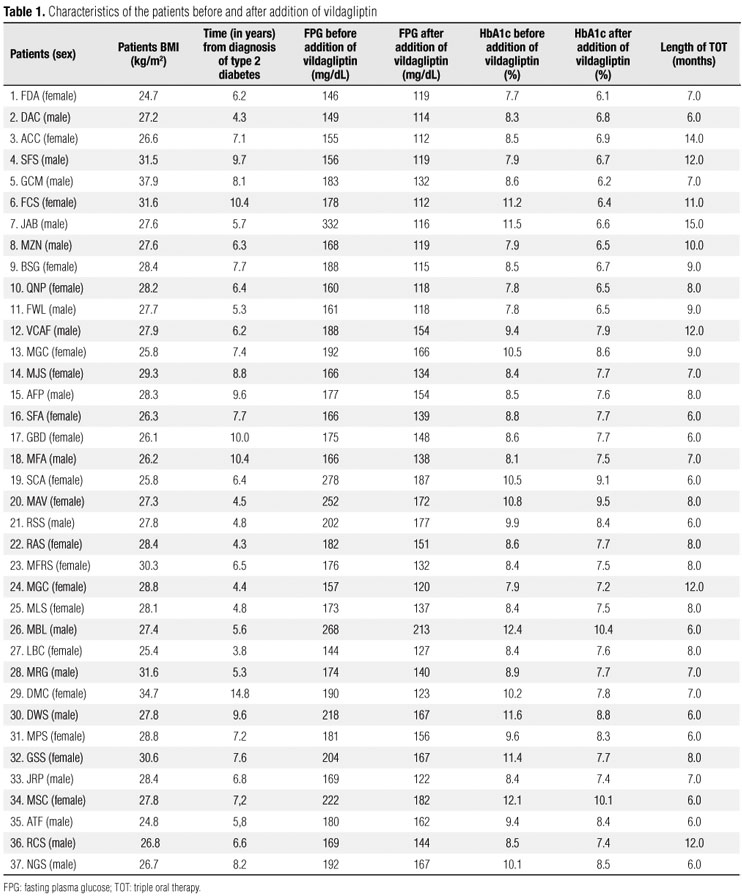 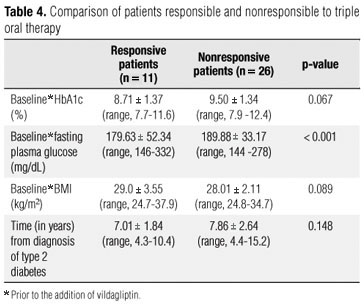