OBJECTIVE: The aim of this study was to compare serum uric acid values in two ethnically distinct Chinese populations: Uyghur, with a high prevalence of nonalcoholic fatty liver disease, and Han, with a lower prevalence.

SUBJECTS AND METHODS: Serum uric acid and several clinical features and laboratory tests relevant to the metabolic syndrome were measured in 4,157 Uyghur and 6,448 Han subjects in a health examination program. The diagnosis of hepatic steatosis was established by abdominal ultrasound examination.

RESULTS: The prevalence of nonalcoholic fatty liver disease was 42.3% and 33.3% among Uyghur and Han subjects, respectively. The corresponding prevalence of hyperuricemia was 8.8% and 14.7%. The mean concentration of serum uric acid in Uyghurs also was lower than in Hans (282.75 vs. 310.79 µmol/L; p < 0.01). However, in both populations, the prevalence of nonalcoholic fatty liver disease was increased in association with increasing serum uric acid concentrations, a trend that was more pronounced in Uyghur than in Han subjects (OR 3.279 and 3.230, respectively). Several components of the metabolic syndrome were more pronounced in Uyghurs than in Hans.

CONCLUSIONS: Serum uric acid is an independent risk factor in nonalcoholic fatty liver disease in both Uyghurs and Hans, but other risk factors may be more important in the differences in prevalence of the disease between the two ethnic groups.

Non-alcoholic fatty liver disease (NAFLD) is a common accompaniment of metabolic syndrome (MS), which is characterized by insulin resistance, obesity, dyslipidemia, and hypertension (1). In recent years, an association between elevated serum uric acid concentrations and NAFLD has been reported (2-9). Some authors have concluded that hyperuricemia is an independent risk factor for NAFLD, and is even related to its histologic severity (7).

This study tried to extend existing knowledge on NAFLD and associated hyperuricemia by measuring uric acid in two ethnically distinct populations, Uyghur and Han, in the Xinjiang region of northwestern China. Uyghur have a high prevalence of NAFLD, an increasingly severe medical problem among them. The two populations differ markedly in their genetic background, lifestyle and dietary habits.

All subjects voluntarily visited the health promotion center of Xinjiang Medical University First Affiliated Hospital, China, for annual checkups between March, 2012 and March, 2013. The following category of subjects were excluded: missing covariate information; alcohol consumption greater than 20 g/day for men and 10 g/day for women; positive test for hepatitis B antigens or hepatitis C antibodies; history of other known causes of chronic liver disease, such as other viral hepatitides or autoimmune hepatitis; use of hepatotoxic medications; history of cancer, respiratory problems, renal diseases, or endocrine disorder. After the exclusions, 10,605 subjects (4,157 Uyghur and 6,448 Han, with mean age of 43.24 ± 12.91 years for Uyghurs and 42.24 ± 12.91 years for Hans) were included in the final analysis.

Hepatic ultrasound examination was performed in all subjects by a trained ultrasonographist who was unaware of the goals of the study and blinded to laboratory findings, using an ultrasound machine (CDUS512, Siemens, Japan) with a 3.5-MHz probe. Hepatic steatosis was diagnosed by characteristic echo patterns according to conventional criteria.

Hyperuricemia was defined as a SUA level ≥ 417 µmol/L (7.0 mg/mL) in men and ≥ 357 µmol/L (6.0 mg/mL) in women who were taking no medicines or antioxidants. The diagnosis of dyslipidemia was based on the definition recommended by The Diabetes Association of the Chinese Medical Association in 2004: hypertriglyceridemia: triglycerides ≥ 1.7 mmol/L; hypercholesterolemia: cholesterol ≥ 5.72 mmol/L; low HDL: HDL < 0.9 mmol/L for men and < 1.0 mmol/L for women; high LDL: LDL ≥ 3.37 mmol/L; elevated fasting plasma glucose: FPG ≥ 6.1 mmol/L. Hypertension was defined as SBP ≥ 140 mmHg, DBP ≥ 90 mmHg or previously diagnosed hypertension. Overweight or obesity was defined as BMI ≥ 25 kg/m2 in both genders.

This study was approved by the Ethics Committee of the First Affiliated Hospital of Xinjiang Medical University and was conducted according to the standards of the Declaration of Helsinki. Written informed consent was obtained from the participants (20120220-135).

Statistical analyses were performed by using the Statistical Package for Social Sciences (SPSS) software package version 13.0 for Windows (SPSS Inc., Chicago, IL). For the demographic and biochemical characteristics, continuous variables were expressed as means and standard deviations (SD), whereas categorical variables were summarized in frequency and percentage. Independent two-sample t-tests were used for the investigation of any association with NAFLD. Odds ratio (OR) and 95% confidence interval (CI) for the presence of NAFLD, according to the SUA levels, were calculated using logistic multiple regression.

The risk factors of hyperuricemia in NAFLD patients were examined using logistic tests. Multivariate logistic regression was performed to draw models of risk for hyperuricemia in subjects with NAFLD that included gender, race, hypertriglyceridemia, high LDL, low HDL, elevated FPG, hypertension, and obesity as independent variables. All statistical tests were 2-sided, and P < 0.05 was recognized as the level of statistical significance.

Table 1 shows the clinical and biochemical characteristics of the 4,157 Uyghurs and 6,448 Hans. There was no significant difference in mean age and sex between the two populations. Mean BMI, WC, TC, LDL, AST, and ALT were significantly higher in Uyghurs, whereas SUA, BUN, systolic blood pressure (SBP), diastolic blood pressure (DBP), FPG, TG, HDL, and SCr were significantly lower in Uyghurs. Mean SUA was 282.75 ± 90.74 µmol for Uyghur and 310.79 ± 92.10 µmol for Hans, a statistically significant difference.

The prevalence of NAFLD in Uyghur and Han populations

On the population that was evaluated, 1,758 Uyghurs (42.3%) and 2,148 Hans (33.3%) met the diagnostic criteria for NAFLD. As illustrated in table 2, mean BMI, WC, SPB, and DBP were higher in both the Uyghur and Han subjects who had NAFLD than in those who did not. Also, the NAFLD subjects had the worst metabolic profile: serum lipid values, liver enzymes, BUN, SCR, and FBG. In particular, SUA concentration was significantly higher in the subjects with NAFLD than in those without NAFLD.

Table 4 shows the risk of NAFLD according to the SUA level. In comparison with Uyghur and Han subjects in quintile 1, odds ratio (95% CI) in quintile 5 were 8.878 (6.757-11.646) for Uyghur, and 7.597 (6.182-9.335) for Han, respectively (P < 0.001). The relationship of SUA with NAFLD remained significant even after adjustment for indictors of metabolic syndrome including obesity, hypertension, hypertriglyceridemia, hypercholesterolemia, low HDL cholesterol, elevated LDL cholesterol and FPG, the adjusted OR for the presence of NAFLD in the subjects with the highest SUA level was 3.253 for Uyghur and 3.053 for Han, as compared with the subjects with the lowest SUA level (Table 4).

In this study, the relationships between serum uric acid concentrations and NAFLD in two distinct ethnic groups, Uyghur and Han in northwest China, which have different prevalence of the disease, the major findings were that serum uric acid concentrations and NAFLD (as well as several components of the metabolic syndrome) were correlated in both populations, despite a higher prevalence of NAFLD among Uyghurs than among Hans.

The Uyghur and Han populations differ greatly in genetic background, lifestyle and dietary habits. Uyghur, the largest minority in Xinjiang Uyghur Autonomous Region of China, are a Turkish ethnic group. In dietary preferences, they generally prefer pasta, meat, cheese, condensed milk, and butter to fresh vegetables. Overweight and central obesity are common among Uyghurs, and NAFLD is becoming a serious health problem among them. Han are the traditional Chinese, native of China.

Although the findings have documented that increased serum uric acid concentrations are independent risk factors for NAFLD among both Uyghurs and Hans, the lower prevalence of hyperuricemia among Uyghurs seems paradoxical. This finding may indicate that various components of the metabolic syndrome, lifestyle, dietary habits and genetic susceptibility are more important in the pathogenesis of NAFLD in Uyghurs than in Hans.

The biochemical role of uric acid in NAFLD is poorly understood, and current data on this subject seem at least partially conflicting. Increased systemic oxidative stress in patients with NAFLD has long been recognized both in animal experiments and clinical studies (10), and uric acid has been proposed to act as an antioxidant of peroxynitrite and peroxynitrite-derived radicals (11,12). A recent study showed that treatment with uric acid in obese ob/ob mice resulted in a nearly complete resolution of fatty liver (13). Thus, elevated SUA levels may reflect a compensatory mechanism counteracting the increased oxidative stress associated with NAFLD. On the contrary, uric acid becomes a strong oxidant in the environment of metabolic syndrome (14). Indeed, some have proposed using allopurinol (15) or dietary measures, such as reduced intake of fructose, which is associated with increased uric acid levels (9,16) in the treatment of the metabolic syndrome and NAFLD. It must be appreciated, though, that serum uric acid may be only a marker of the metabolic syndrome and not etiologically important in the disease.

The results of the study corroborate and have extended the results of previous studies. Others researchers in China and Korea (2-6) have also found that elevated serum uric acid levels, even within the normal range, predict an increased risk of NAFLD. The study has better defined the relative significance of hyperuricemia and other risk factors in different ethnic groups. The study showed that similar analyses should be conducted in other populations. Especially in non-Asian ones.

Multivariate regression analysis showed that hypertriglyceridemia and male gender were the dominant risk factors for hyperuricemia in NAFLD subjects. This observation may reflect the influences of hypertension, smoking, and a high-fat diet. It also found that elevated plasma glucose values were protective against hyperuricemia. The latter finding is consistent with the observation that elevated plasma glucose and increased urinary excretion of glucose competitively inhibits uric acid reabsorption in the proximal tubules, and results in increase uric acid excretion (17).

The study does not define causal relationships between serum uric acid and NAFLD, this is a challenge that will require further study. The study also recognizes that the population was check-up crowd in government departments and enterprises, and may not be representative of more diverse populations. 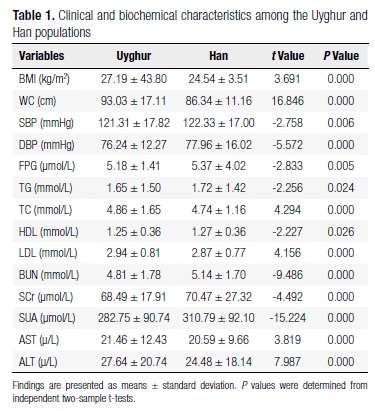