OBJECTIVE: To investigate associations between physical activity, comorbidity severity, depressive symptoms, and health-related quality of life in type 2 diabetes mellitus. SUBJECTS AND METHODS: All individuals, 200 patients and 50 controls, aged from 40 to 60 years, were investigated by interview, and all variables were measured concurrently. Physical activity was evaluated by the International Physical Activity Questionnaire (IPAQ), Health-Related Quality of Life (HRQL) by the Short-Form Health Survey (SF-36), comorbidity severity by the Charlson Comorbidity Index (CCI), and depressive symptoms by the Beck Depression Inventory (BDI-II > 16). Single and multiple regression analysis evaluated the effects of independent variables on physical activity. RESULTS: The patients had more depressive symptoms and greater comorbidity severity (p < 0.005). Diabetic patients showed better activity levels (IPAQ) (p < 0.005). Functional Capacity, General State of Health, and Physical Limitation were the most affected subscales in the SF-36 evaluation of the HRQL. Sedentary diabetic patients had higher waist circumference, waist-to-hip ratios, more depressive symptoms, and worse HRQL. Functional capacity (p = 0.000), followed by General State of Health (p = 0.02), were the health status measure subscales independently associated with physical activity. Conclusions: The findings suggest that increasing patient independence and treating depressive symptoms can promote physical activity for type 2 diabetes mellitus patients. It is suggested that group activities and caregivers/family support might compensate for the patient dependence, and increase adherence to exercise programs in those that are less active.

SUBJECTS AND METHODS: All individuals, 200 patients and 50 controls, aged from 40 to 60 years, were investigated by interview, and all variables were measured concurrently. Physical activity was evaluated by the International Physical Activity Questionnaire (IPAQ), Health-Related Quality of Life (HRQL) by the Short-Form Health Survey (SF-36), comorbidity severity by the Charlson Comorbidity Index (CCI), and depressive symptoms by the Beck Depression Inventory (BDI-II > 16). Single and multiple regression analysis evaluated the effects of independent variables on physical activity.

Diabetes is a chronic disease that affects millions of people and its complications have increasing effects on quality of life and mortality (1,2). The number of people with type 2 diabetes (T2DM) will rise from 135 million in 1995 to 300 million in the year of 2025 (3). Thus, measures to prevent diabetes and metabolic syndrome are vital to reduce the escalating cost of this highly endemic disorder. Many complications associated with diabetes, such as hypertension, stroke, impaired mental health, muscular weakness, depression, and diurnal somnolence have also been linked to sedentary life (4,5). Moreover, it has been largely demonstrated that lifestyle interventions that include regular physical activity and healthier dietary habits are beneficial for diabetic patients (6,7).

Lower basal levels of PA have been associated with poor mental health (8), depression and perceived stress (9-11). Lifestyle intervention programs for T2DM have been previously verified in many controlled trials: PA shows better effects on glycemic control and blood pressure than other therapies alone (12,13). Resistance training (14), isolated aerobic exercise, (15) and the combination of them (16) can improve glycemic adjustments; overall, the beneficial effects of exercise on physical fitness, disease symptoms, and quality of life in T2DM are strong (17-21). However, despite all these evidences, most patients remain sedentary (22,23).

Most lifestyle intervention studies have focused on education programs (24), including advice on PA (25), diet (26), and both (19). An Italian study reported that behavioral changes are needed to achieve the goals of exercise training: in this study, lack of time and negative attitudes were the most common obstacles reported by patients (27). In fact, increasing awareness of patients and physicians about the benefits of PA on reducing obesity, insulin resistance, and cardiovascular complications has already been done. Given that, and despite frequent physicians recommendation of a physically active lifestyle, patient adherence is still low. It needs to be strengthened by the investigation of factors influencing adherence to physical activity, which can possibly lead to measures for improvement exercise programs effectiveness (28).

The Diabetes and Physical Activity in Fortaleza (DPAF) study is a clinical study that explores the status of PA and fitness in individuals with T2DM. The objectives of this study were: first, to evaluate the level of PA and health related quality of life in T2DM patients and second, to examine the associated factors.

This is an observational cross-sectional analysis of consecutive T2DM patients regularly seen at the Integrated Center for Diabetes and Hypertension (CIDH) in Fortaleza, Brazil (DPAF study). Diagnosis of T2DM was defined according to the criteria of the American Diabetes Association (29). The study involved patients aged from 40 to 60 years old, consecutively recruited over a period of 12 months (November, 2010 to October, 2011). A subsample of 200 patients agreed to participate in this study and were interviewed. The CIDH provides treatment to approximately 5,000 diabetic patients per month. Initially, 324 patients were examined and 124 patients were excluded: 75 individuals refused to participate, 19 were diagnosed with diabetes mellitus type 1, five had recent hospitalization, two were pregnant, and 20 individuals were out of age range of the inclusion criteria. Controls were healthy subjects selected among staff personnel. In this study of diabetic patients, we avoided recruiting family members due to the possibility of a family link. Also, the reduced number of control subjects was due to the strict exclusion criteria associated comorbidities, such as arterial hypertension, diabetes and familial diabetes, among others. The specific questionnaires were all done concurrently in a face to face interview by two professionals from the medical staff. Patients were excluded if they had severe associated comorbid disorder, recent hospitalization, and were not competent to give informed consent. The study protocol was approved by the local Research Ethics Committee (CEP 031-04-09), and written informed consent was obtained in all cases.

Demographic data, habits, and comorbidities were recorded using a standardized questionnaire. Measurement of physical activity was done using the International Physical Activity Questionnaire (IPAQ) that estimates the habitual level of physical activity (30), and whose reliability has been previously proven in the evaluation of physical activity levels in Latin America (31). IPAQ has three levels of physical activity: low, moderate, and high. The Health Status Index or Health Related Quality of Life (HRQL) was studied with the Short-Form Health Survey (SF-36) (32). The Sf-36 evaluates quality of life in eight domains related to physical and mental health, and each variable ranges from 0 to 100 points, with zero being the worst and 100 the best possible score. Accuracy, reliability, validity, and adequacy of the HRQL in Brazil has already been proven (33). Comorbidity severity was evaluated with the Charlson Comorbidity Index (CCI); scores range from 0 to 37, and higher scores indicating worse comorbidity severity (34). This questionnaire has been previously used in a Brazilian population, and its validity was examined (35). Depressive symptoms were evaluated by the Beck Depression Inventory (BDI-II) and were defined as present if the score was greater than 16 (36). A Brazilian version of the BDI has been previously validated (37). In our study, physical inactivity was defined as less than 30 minutes of exercise per day, and absence of heavy physical exertion at home or work, namely cleaning, hand washing clothes, or others.

Descriptive statistics are presented as mean ± standard deviation, range and frequency (% values). Fisher's Exact Test for categorical variables, Mann-Whitney U test for continuous variables, and Student's t test for normally distributed data with equal variances were performed to compare cases and controls. Pearson's correlation coefficients were calculated to evaluate the relationship between measures. A forward stepwise multiple regression analysis evaluated how variables predicted physical activity levels (IPAQ). Initially, all potential variables were analyzed; in the final model, variables with p < 0.15 were all included as potential predictor variables; a P < 0.05 was required for a variable to be retained in the final model. Statistical analysis was carried out using SPSS for Windows, version 16.0. Statistical significance was set at p < 0.05.

The main finding of this study is that the Health Status Index (SF-36) subscale Functional Capacity, followed by General State of Health, were associated with the level of physical activity in type 2 diabetic patients. These findings show that functional capacity that mainly evaluates the degree of patient independence is an important factor determining physical activity. Also, depressive symptoms were worse among more sedentary patients. Theoretically, increasing patient independence either with reassurance or caregiver and/or family support could improve physical activity. In this sense, group exercise could be more efficacious. A previous study has shown that the presence of multiple comorbid illnesses or functional impairments is a more important predictor of limited life expectancy in older diabetic patients (2). Corroborating this report, we suggest that sedentary life is a vital link to be modified in this unwanted chain of events.

Our data showed that a significant proportion of diabetic patients, nearly 50%, have a sedentary lifestyle. Of interest, diabetic patients revealed to be more active than an age-matched control population, which is probably the result of education: this indicates a need for more educational campaigns among the general population. These findings are in agreement with others studies showing lack of exercise and consequent obesity in the world population (38). Other studies have confirmed high prevalence of physical inactivity in diabetic individuals, mainly among females (23,39).

The diabetic population and the subsequent control group investigated in the DPAF study was formed mostly by adults and elderly patients. In agreement with most diabetes reports, patient aged are above 40 years (3). The distribution was nearly homogeneous when evaluated by sex, with no statistical differences between groups, only a modest increase in the number T2DM females. The higher number of female patients found in this study could be justified by a greater demand and increased use of public health services by women (40). The diabetic population of the DPAF study showed 64.5% of excessive weight (overweight/mildly obesity), 19.5% of moderate/severe obesity, and only 15.5% of healthy weight. In the control group, 70% had excessive weight (overweight/mildly obese), 12% moderate/severe obesity, and only 18% had ideal weight. All this confirms the urgency for wide and specific measures to be taken, possibly, by a multidisciplinary team in the health system. Physical inactivity (PI) and smoking have been considered risk factors for early mortality. Sedentary lifestyle and smoking have been considered risk factors for early mortality (41). In this study, a small percentage of the population investigated smoked, 6% of patients versus 8% of the control subjects. Heavy drinking was identified in 30% of controls, while only in 10% of diabetic patients. Again, this points out to the need to enlighten the general population about the hazards of heavy drinking in order to avoid preventable diseases.

Some limitations must be presently acknowledged. The study involved a small number of control subjects and this was partially due to the necessity of excluding age-related subjects presenting comorbidities. First, this is a cross-sectional evaluation, and future research on this subject, particularly prospective studies, could evaluate the effects of modifying patient dependence on adherence to a physical activity program. Adherence to diabetes treatment is the key strategy to achieve adequate glycemic control.

In summary, our data show that functional capacity is independently related to physical activity in diabetic patients. Also, individuals with a sedentary lifestyle have more depressive symptoms. Based on these findings, future prospective studies should examine the relationship between patient independence and the level of physical activity. Also, depression treatment can contribute to improve adherence to physical activity. 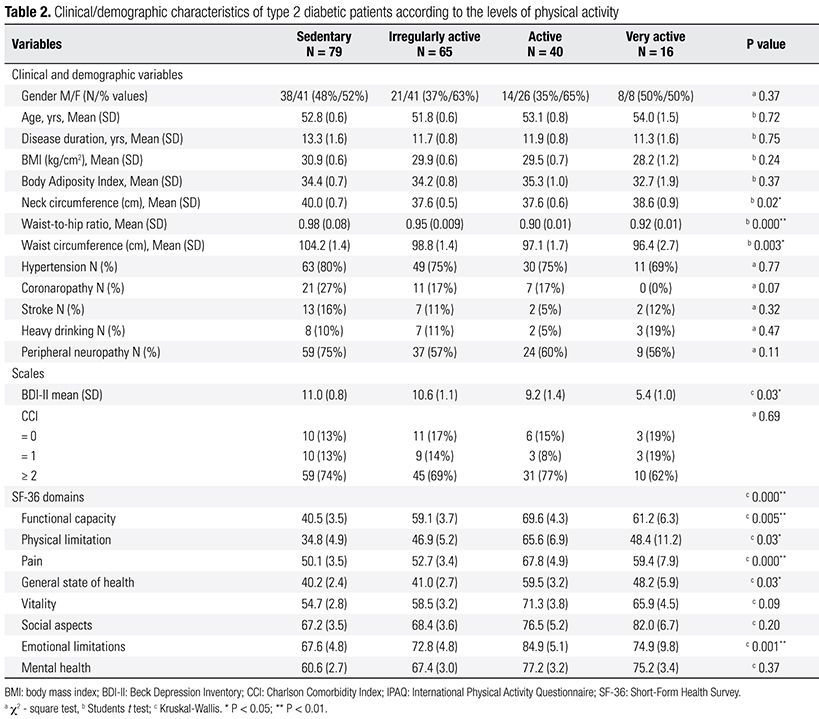