Opisthorchis felineus is a small fluke that can be found in Europe, Asia and North America. Domestic animals, especially cats, become infected by eating insufficiently cooked fish. Clinical signs are variable, and infestation with a moderate number of parasites is usually asymptomatic, however with a high quantity of parasites it may lead to hepatic insufficiency.

A 15-year-old male domestic short-haired cat was admitted to the Veterinary teaching Hospital of the University of Trás-os-Montes e Alto Douro, with a history of anorexia, lethargy, weight loss and haematuria. The animal was hill for a week, and its health had rapidly worsened. The cat lived near a riverside and ate frequently freshwater fish. The cat had not been vaccinated or dewormed. It was in a shock condition with stupor, hypothermia, dehydration, increased heart rate, poor pulse quality, anaemic mucous and lengthy capillary refill time. Auscultation revealed pulmonary crackles, lengthy capillary refill time. Hepatomegaly was evident on abdominal palpation.

The whole pulmonary parenchyma showed an increase in radiograph density and abdominal radiography revealed gas accumulation in the intestine, an increase of the hepatic projection area and small kidneys.

Treatment with a lactated Ringer's solution, IV, supplement with potassium chloride and 22mg/kg ampicillin, QID, was started due to suspect of chronic renal failure. The condition of the cat became worse and it died 12 hours after admission. 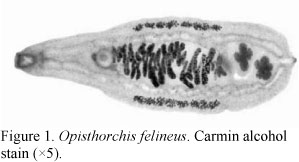 Histologic evaluation showed chronic interstitial nephritis and arteriosclerosis and calcification of the pulmonary vessels. The liver presented intracanalicular colestasis, ductal hyperplasia and hypertrophy with parasites inside (Fig. 2), hepatitis and colangitis.

It was not possible to ascertain as to what extent the clinical condition of the cat was due to the parasite, and whether the infestation was responsible for the extrahepatic lesions.

The geographic distribution of this parasitosis differs according to the several species of the genus Opisthorchis. O. felineus is endemic in Central Europe and Eastern Europe, Middle East, Asia Minor, Asian Russia, Vietnam, India, and it has also been described in Canada (Cheng, 1986; Urquhart et al., 1996)

The animal of this study was often fed with raw freshwater fish. O. felineus requires two intermediate hosts (Romero, 1988; Urquhart et al., 1996). The first, in which cercariae develop from rediae, is a snail Bithynia tentaculata (Oriel and Lawrance, 1995; Urquhart et al., 1996; Bowman, 1999). The second, in which cercariae encyst as metacercariae, can be two dozen species from seventeen genera of freshwater cyprinoid fish (Bowman, 1999; Mas-Coma et al., 2000). The definitive host becomes infected by eating the raw or insufficiently cooked fish, and young flukes migrate to the liver via the bile ducts (Cheng, 1986; Urquhart et al., 1996; Bowman, 1999). The adult flukes are parasites of the bile and pancreatic ducts and small intestine of the host (Cheng, 1986; Romero, 1988; Bowman, 1999; Cullen et al., 2001).

Infestation with a moderate number of parasites is usually asymptomatic, but in a chronic inflammation with a high quantity of parasites may lead to hepatic insufficiency (Mehlhorn et al., 1992; Bowman, 1999).

A few cases of hepatic or pancreatic carcinoma in man and cat associated with O. felineus were referred by Soulsby (1987).

Diagnosis of infection is based on the identification of the operculated eggs in the faces by a technique of formalin-ether sedimentation or by an enzyme-linked immunosorbent assay (ELISA) for the detection of specific antibodies (Johnson and Sherding, 1994; Hugh-Jones et al., 1995). Laboratory findings tend to be inconsistent and unremarkable. Eosinophilia, hyperbilirrubinemia and increased serum alanine aminotransferase and aspartate aminotransferase activity is sometimes detected (Johnson and Sherding, 1994; Campillo, 1999).

Specific treatment for this parasitosis has not been available until recently. Hexachlorophene in single oral doses of 20mg/kg for the treatment of opisthorchiasis in dogs and cats is referred by Bowman (1999). Alternatively Johnson and Sherding (1994) suggest that a daily dose of praziquantel (40mg/kg), for three consecutive days may be used. Feeding with boiled fish prevents infection (Mehlhorn et al., 1992; Urquhart et al., 1996).

The cat of this report presented clinical signs, confirmed by laboratory tests, of chronic renal failure, and it was treated accordingly. No symptom suggested an Opisthorchis infestation, and the diagnostic ELISA was not available in the clinic. The massive infestation observed at post mortem examination was therefore an unexpected finding.

It is concluded for the importance of Opisthorchis infection as a clinical possibility in cats living near river lines or eating raw fish. These clinical situations may have special importance in elderly animals or in chronic pathologies and may suggest the demand for a specific deworming scheme with broad action drugs.

We thank Drª Leonor Miranda for translation of the manuscript.