This case report describes diagnostic and prognostic applicability of pulmonary acoustic radiation force impulse elastography and ultrasonography in canine hydrops fetalis. We also explore these methods’ potential in prediction of postnatal respiratory dysfunction. Two pregnant bitches (English bulldog [case 1] and French bulldog [case 2]) were referred for sonographic evaluation in their last week of pregnancy. Ultrasound showed that in each bitch, one fetus presented with lung alterations (hyperechogenicity, irregular surface, and pleural effusion) and anasarca. The other fetuses of the litter were normal, and they were observed as light gray and dark blue on pulmonary elastography. Their shear-wave velocity was 0.75m/s. Fetuses with hydrops were observed as medium gray and dark blue, and the average shear-wave velocities were 1.05m/s (case 1) and 1.12m/s (case 2). Findings were compatible with increased lung rigidity. Six neonates of English bulldog and two of French bulldog showed no signs of clinical abnormalities during neonatal assessment. One puppy in each gestation presented with anasarca and respiratory distress, and died approximately 24 hours after birth. Novel ultrasound techniques (elastography) for assessing pulmonary tissues in abnormal fetuses in veterinary obstetrics can promote early, safe, and non-invasive diagnosis of canine prenatal and neonatal alterations.

Figure 2   Elastographic image of a French bulldog fetus with hydrops. The examination made it possible to determine the tone of the fetal lung tissue and shear-wave velocity of the abnormal tissue (right corner).

Figure 3   Elastographic image of an English bulldog fetus with hydrops. The examination made it possible to determine the shear-wave velocity of the abnormal tissue (right corner). 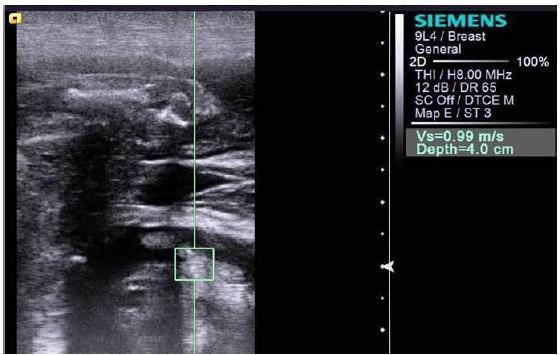