Serum protein concentrations, including acute phase proteins (APPs), of goats and ewes with naturally acquired Sthaphylococcus aureus mastitis were determined by means of SDS-PAGE electrophoresis to evaluate the relevance of these APPs as biomarkers of the disease in these species. Fifteen healthy goats and 5 goats with naturally acquired staphylococci mastitis, as well as fifteen healthy ewes and 5 ewes with staphylococci mastitis were submitted to daily blood sampling during 7 days. In goats, an increase of 570%, 125%, 621%, and 279% in serum concentrations of ceruloplasmin, fibrinogen, haptoglobin and α1-acid glycoprotein, respectively, was observed. In sheep the increase in serum concentrations of ceruloplasmin, fibrinogen, haptoglobin and α1-acid glycoprotein was of 337%, 90%, 461%, and 225%, respectively. Our results indicate that these APPs have considerable potencial as early and sensible biomarkers of mastitis caused by S. aureus in goats and sheep.

Despite the importance of determining APPs in ruminant clinic, there are only few reports available on this subject, particularly on goats and sheep. Thus, the aim of the present study was to quantify APPs in blood serum from goats and ewes with naturally acquired Staphylococcus aureus mastitis using SDS-PAGE, in order to assess the importance of such proteins as early biomarkers of the disease in these species.

Fifteen healthy goats and 15 healthy ewes (control groups) as well as five goats and five ewes with naturally acquired Staphylococcal mastitis were used. The experimental protocol was approved by the Committee of Ethics and Animal Welfare of the School of Agrarian Sciences and Veterinary Medicine, São Paulo State University (Unesp), Brazil, under protocol number 029033-08.

Selection of animals was performed by physical examination and microbiological isolation and identification of Staphylococcus aureus in milk samples by assessing the colony characteristics on blood agar, Gram staining and positivity to biochemical tests such as catalase, coagulase, mannitol, Voges-Proskauer and anaerobic fermentation.

Control animals that presented no clinical signs of mastitis and were negative for bacterial detection in milk culture belonged to the School of Agrarian Sciences and Veterinary Medicine (UNESP). Ill animals were selected from among patients with acute mastitis (i.e. fever, swelling and/or local pain in the mammary gland, inappetence, changes in the characteristics of milk, etc) admitted into the School Veterinary Hospital at the same institution. Animals were included in the study after acknowledgment (through anamnesis) that the manifestation of clinical signs begun no longer than 3 days before admittance.

Once included into the experiment, consecutive daily blood samples were taken for six days and moments identified as M1, M2, M3, M4, M5 and M6. During the study period (M1 - M6), animals remained in the Hospital and were treated (M2-M4), once daily for three days with M1 being the first sampling moment when the animal had no therapy influence on its immune response to disease. Treatment consisted of intramammary administration of 200 mg of gentamicin once daily. All females were only discharged from Hospital after microbiological cure of the infection.

Blood samples were collected in tubes without anticoagulant and centrifuged to obtain serum, which was frozen in aliquots at -80ºC for ulterior analysis.

Goats with mastitis presented mild increase in concentrations of total protein in serum when compared with the control group. Total protein levels subsequently decreased five days after admission (M5). There was no difference in serum total protein in ewes between groups and moments (Table 1, Figure 1).

Ceruloplasmin levels in goats with mastitis were considerably elevated (i.e. 570%) when compared with control group, with maximum concentration at the second day in hospital (M2), and gradual decrease until the end of the experimental period (Table 2, Figure 2). Also, ceruloplasmin concentrations in ewes with mastitis were 337% higher than in the control group. Between moments, a gradual decrease in ceruloplasmin levels it was evident along the experimental period in the mastitis groups.

Goats with mastitis presented fibrinogen concentrations 125% higher than the control group, and maximum levels were found at the third day in hospital (M3). Although the lowest serum level of fibrinogen was detected at M6 in goats with mastitis, values were still significantly higher than in the control group (Table 3, Figure 3). Regarding ewes, plasma fibrinogen increased 90.9%, with higher levels in M2 and similar pattern when compared with goats throughout the experimental period.

Costa et al. (2010COSTA, N.A.; SIMÃO, L.C.V.; FAGLIARI, J.J. et al. Alterações na concentração do fibrinogênio e da haptoglobina em ovelhas com mastite infectadas experimentalmente com Staphylococcus aureus. Arch. Vet. Sci., v.12, p.119-121, 2010.) reported that the peak in plasma fibrinogen occurred 132 hours after the experimental intra-mammary infection with Staphylococcus aureus in ewes. This time lapse matches with M5-M6 in our experiment, when, contrary to the report of the previous authors, there was a significant decrease in serum fibrinogen concentrations. However, it is important to consider the more accurate control regarding the beginning of clinical signs in experimental works, as compared to naturally occurring disease, in which it is also difficult to control some variables, as in the present study.

In general, haptoglobin is considered a sensitive and reliable inflammatory biomarker in goats and ewes suffering staphylococcal mastitis. The present study agrees with Eckersall et al. (2001ECKERSALL, P.D.; YOUNG, F.J.; MCCOMB, C. et al. Acute phase proteins in serum and milk from dairy cows with clinical mastitis. Vet. Rec, v.14, p.35-41, 2001.) who stated that haptoglobin is highly sensitive in detecting inflammatory/infectious diseases in ruminants; and with Skinner and Roberts (1994SKINNER, J.G.; ROBERTS, L. Haptoglobin as an indicator of infection in sheep. Vet. Rec , v.134, p.33-36, 1994.) who reported that this protein may be used as a safe indicator of bacterial infection and inflammation in sheep.

Recent studies in sheep and other species revealed that α1-acid glycoprotein may be an indicator of chronic inflammation, due to its long plasma half-life compared with other APPs (Eckersall et al., 2007ECKERSALL, P.D.; LAWSON, F.P.; BENCE, L. et al. Acute phase protein response in an experimental model of ovine caseous lymphadenitis. BCM Vet. Res, v.3, p.35, 2007.; González et al., 2008GONZÁLEZ, F.H.D.; TECLES, F.; MARTÍNEZ-SUBIELA, S. et al. Acute phase proteins response in goats. J. Vet. Diagn. Investig, v.20, p.580-584, 2008.). However, the early detection and significant high level of this protein at the beginning of disease, associated with its decrease by the fourth day in hospital (M4) in both goats and ewes, confirm its characteristic of positive APP, acting early in the acute phase response in females with staphylococcal mastitis.

Detection and quantification of APPs by SDS-PAGE was useful and reliable as a complementary test in the diagnosis of mastitis caused by Staphylococcus aureus in goats and ewes. Moreover, the APPs ceruloplasmin, haptoglobin, and α1-acid glycoprotein were early and sensitive indicators of mammary inflammation in both species.

To Fundação de Amparo e Pesquisa do Estado de São Paulo (FAPESP) for the financial support to this work.

Figure 1   Means of serum protein (g/dL) in both healthy and ill (staphylococcal mastitis) goats and ewes from admission (M1) to the end of the experimental period (M6). 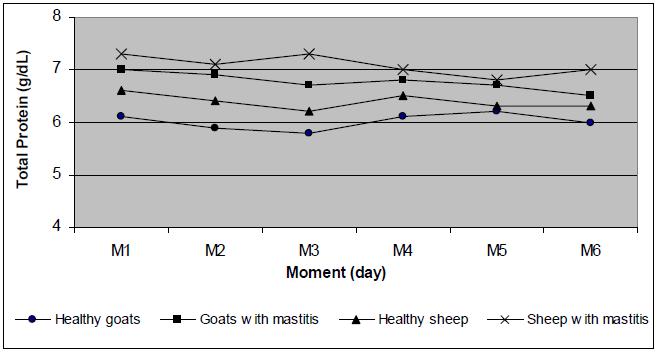 Figure 2   Means of serum ceruloplasmin (mg/dL) in both healthy and ill (staphylococcal mastitis) goats and ewes from admission (M1) to the end of the experiment (M6).

Figure 3   Means of serum fibrinogen (mg/dL) in both healthy and ill (staphylococcal mastitis) goats and ewes from admission (M1) to the end of the experiment (M6).

Figure 4   Means of serum haptoglobin (mg/dL) in both healthy and ill (staphylococcal mastitis) goats and ewes from admission (M1) to the end of the experiment (M6).

Figure 5   Means of serum α1-acid glycoprotein (mg/dL) in both healthy and ill (staphylococcal mastitis) goats and ewes from admission (M1) to the end of the experiment (M6).