METHODS: Sixty eyes of 30 patients underwent bilateral implantation with AcrySof® ReSTOR® SN6AD3 intraocular lens with +4.00 D near addition. Patients were divided into myopic and hyperopic groups. Monocular best corrected visual acuity at distance and near and monocular uncorrected visual acuity at distance and near were measured before and 6 months postoperatively.

The main goal of a presbyopic patient is to reduce dependence on optical aids and improve both distance and near vision as well as the range of clear vision. Several studies report good safety, predictability, and efficacy outcomes in the implantation with monofocal(1-5), toric(6) and multifocal intraocular lenses (IOLs)(7-9) after refractive lens exchange (RLE).

Patients with hybrid(10-13) spherical IOLs show good distance and near visual acuity with some restrictions at intermediate distances, and visual complaints regarding glare and haloes(14). Aspheric IOLs were designed to introduce negative spherical aberration to compensate for the positive spherical aberration of the cornea(15). These new IOL designs with aspheric profiles were developed with the goal of reducing unwanted visual phenomena associated with multifocal IOL performance. Preliminary reports(16-20) show good distance and near vision as well as functional intermediate vision.

The purpose of this study was to assess the efficacy, safety, and predictability in patients who had undergone bilateral implantation of the AcrySof® ReSTOR® SN6AD3 IOL in the capsular bag after RLE.

The present prospective study involved 60 consecutive eyes of 30 patients bilaterally implanted with of the AcrySof® ReSTOR® SN6AD3 IOL (Alcon Inc., Fort Worth, Texas). Inclusion criteria were age between 45 and 70 years and the motivation to reduce the dependency of any form of spectacle or contact lens correction for distance and near. Exclusion criteria included ≥1 diopters (D) of corneal astigmatism, history of glaucoma or retinal detachment (RD), corneal disease, and previous corneal or intraocular surgery. The tenets of the Declaration of Helsinki were followed in this research. Informed consent was obtained from all patients after the nature and possible consequences of the study were explained. Approval from the Institutional Review Board was obtained.

Before the RLE procedure, patients underwent a complete ophthalmologic examination. Ocular biometry was performed with the IOLMaster biometer (Carl Zeiss Meditec, Inc., Dublin, CA). The SRK/T formula was used for eyes with axial length (AXL) of 22.00 mm or higher and Holladay II formula for eyes with AXL lower than 22.00 mm. The targeted refraction was emmetropia in all cases. The same surgeon performed all surgeries in this study by phacoemulsification with the Infiniti Vision System (Alcon, Fort Worth, TX) using topical anaesthesia and a clear corneal 2.2-3.2 mm incision. There were no complications in any of the cases.

The AcrySof® ReSTOR® SN6AD3 pseudoaccommodating aspheric IOL uses apodization, diffraction, and refraction. The IOL power used in this study varied from +10.00 to +30.00 D and incorporated a +4.00 D near addition (add). The IOL has an aspheric profile to correct positive spherical aberration of the cornea. The IOL material includes a blue light-filtering chromophore. It has been suggested that the use of a blue-light filter is advisable because it prevents ultraviolet light alterations to the retina without disturbing contrast sensitivity and chromatic vision(21,22).

All examinations were performed preoperatively and 6 months after IOL implantation.

Figure 1 shows the predictability scatterplots for both groups, with the R=0.97 for myopic group and R=0.91 for hyperopic group.

Table 3 summarizes monocular visual acuity results obtained for near vision. None of the examined eyes in both groups lost lines of BCNVA 6 months after the surgery (see Figure 3). Twelve eyes (40%) in the myopic group and 7 eyes (23.3%) in the hyperopic group gained lines of BCNVA (p=0.27).

None of the eyes examined required a second intervention. No potentially sight-threatening complications such as persistent corneal edema, pupillary block, RD, or endophthalmitis were observed during the postoperative period. In addition, no eye was in the need of posterior capsulotomy up to the last postoperative visit.

Several studies have shown that the RLE and IOL implantation in the posterior chamber gives good safety, predictability, and efficacy outcomes and that the postoperative improvements in visual acuity are stable throughout a long follow-up period(2-9). In the current study, the safety index was good and similar for both the myopic and hyperopic groups (1.05 and 1.01, respectively). Only two eyes (6.67% of the eyes) in the hyperopic group lost 2 lines of BCVA, all the others maintaining or improving BCVA in both groups. There was no statistically significant difference between pre and postoperative BCVA in hyperopic group (p=0.49), however we found statistically significant difference in the myopic group (p=0.02). Magnification and minimization of the retinal image in myopic and hyperopic patients, respectively, may play a significant role in this difference. Fernandez-Vega et al.(9), studied the spherical ReSTOR® SA60D3 IOL in 224 eyes of 112 consecutive patients and found similar results of safety indexes in myopic and hyperopic groups (1.05 and 1.02, respectively). Thirty per cent and 23% of patients gained ≥1 lines of BCVA in the myopic and hyperopic groups, respectively. In a previous clinical study in which the authors studied 68 eyes implanted with Array multifocal IOL, they found that no eye in the myopic group and 3 eyes in the hyperopic group sustained a loss of 1 line of BCVA. Eighty-two percent of patients (41 eyes) remained unchanged, 10% (5 eyes) had a gain of 1 line, and 2% (1 eye) had a gain of 2 lines of BCVA(8).

The efficacy indexes were good and comparable in both groups (0.88 and 0.86 in myopic and hyperopic groups, respectively). The patients obtained an UCVA of 0.08 logMAR and 0.11 logMAR that improved to 0.01 logMAR and 0.04 logMAR in myopic and hyperopic groups with the best distance correction (Table 2). In the Fernandez-Vega et al.(9) study, the mean UCVA (Snellen decimal) was 0.90 in the myopic group and 0.95 in the hyperopic group and these values remained similar with the best distance correction. Some authors(7)studied 68 eyes implanted with Array multifocal IOL and reported that the 100% of the patients achieved binocular UCVA of 0.5.

The predictability of the RLE treatment was high. The 96.67% of the eyes of myopic and hyperopic groups were within ±1.00 D and 6 eyes (20%) of the myopic group and 10 eyes (33.33%) of the hyperopic group were within ±0.50 D of the desired refraction at 6 months. For both groups, the preoperative SE correlated highly with the amount of change in the postoperative SE (Figure 1; R=0.97 for myopic patients and R=0.91 for hyperopic patients). These results agree with another research in which the authors obtained 100% of the patients within ±1.00 D of the desired refraction 6 months after surgery. Previous studies found better results, with 80.9% of patients(7) and 90.9% for the myopic group and 88.6% for the hyperopic group(9) with a postoperative refractive SE within ±0.50 D of the target refraction in both studies.

No eye lost vision as a result of RD, and no Nd:YAG capsulotomy was necessary in our patients with a 6-month follow-up. Nevertheless, RLE remains a controversial technique because it is an invasive procedure and carries an increased risk of RD(23-26). Other authors(25) showed an RD rate of 8.1% after 7 years. A recent research reported that in 62 myopic cases of RLE over an 11-year period, a 3.2% RD rate occurred at intervals of 2 and 5 months after surgery(5). If refractive lens exchange is performed in patients with high myopia, they must give extensive informed consent regarding the long-term risks for RD. In addition, the risks for RD, endophthalmitis, glaucoma, corneal decompensation, and posterior capsule opacification should be discussed with all patients regardless of their preoperative refractive error. Preoperative and long-term retinal evaluation is imperative previous to this procedure to control and treat any possible retinal complication.

One of the most important assessments for successful RLE with multifocal IOLs use involves precise preoperative measurement of axial length and accurate IOL power calculation. We chose the SRK/T formula for eyes with AXL≥22.00 mm and the Holladay II formula for eyes with AXL<22.00 mm based on previous reports(27-28). Minimal deviation from target refraction was obtained using these formulas (0.04 ± 0.39 and 0.17 ± 0.40 D for myopic and hyperopic groups, respectively). Current customized calculation using individual computer models for each eye(29) would be helpful in this type of refractive surgery patients.

Results in the present study reveal good predictability, safety and efficacy for the RLE with ReSTOR® SN6AD3 IOL implantation. However, some limitations in our study must be taken into account. First, spectacle independence and photic phenomena have not been investigated, so future studies are needed, considering subjective questionnaires for those purposes. Our main interest in the present work was to report distance and near visual acuity, and intermediate vision has not been measured, being this the second limitation. A recent study showed that intermediate vision is improved with the aspheric ReSTOR® SN6AD1 IOL with +3.00 D of add model in relation to that found with the spherical ReSTOR® SA60D3 IOL with +4.00 D of add model and the aspheric ReSTOR® SN6AD3 IOL with +4.00 D of add model(20). The role of pupil size also needs to be addressed in future studies, and so the changes in contrast sensitivity.

We thank Cristina Puchades for her help in different aspects of the study.

Study was carried out at Optics Department, University of Valencia, Spain. 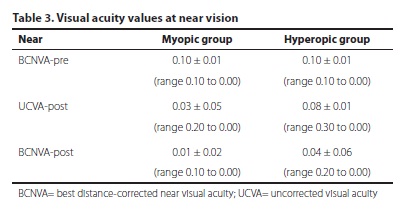