Does propofol and isoflurane protect the kidney against ischemia/reperfusion injury during transient hyperglycemia?

PURPOSE: To study the effect of isoflurane (Iso) or propofol (Prop) anesthesia on renal ischemia/reperfusion injury (IRI) during transient hyperglycemia.

CONCLUSIONS: Propofol and isoflurane showed the same level of protection against ischemia/reperfusion injury in the normoglycemic groups. Transient hyperglycemia is associated with an increase in IRI.

Ischemia reperfusion injury (IRI) refers to the tissue damage caused by return of blood supply (reperfusion) to tissue after a period of ischemia. Ischemic kidney injury is associated with high morbidity and mortality. Improving the ability of this organ to tolerate ischemic injury would have important implications because ischemic insults are often recurrent in patients1.

Many anesthetics have been shown to be protective against IRI2,3. Knowledge on their potential benefits allows physicians to choose the best anesthetic or combination of anesthetics for their patients. It has been demonstrated that halogenated anesthetics, opioids, and propofol can protect against myocardial IRI4. According to a previous study, isoflurane displays renal protective effects3.

Propofol exerts a number of non-anesthetic effects such as antioxidant, immunomodulatory, analgesic, antiemetic, and neuroprotective effects5. Propofol has been reported to protect cells against apoptosis induced by ischemia/reperfusion (I/R), and that this protection was probably due to a preconditioning effect being, at least in part, mediated by KATP channels6. In addition, propofol attenuated IRI on LLC-PK1 cells when present either one or 24h before initiated I/R, and also during the recovery period, but not when it was added only during ischemia. The early exposure and response of allograft tissue to hyperglycemia may increase the risk of rejection. Acute hyperglycemia may enhance renal ischemic injury, antigen presentation, apoptosis, and increased inflammatory responses in renal transplantation7. Several experimental studies have documented that renal ischemic injury in diabetic animals is worse than similar renal ischemic injury in normoglycemic animals. This increased renal injury seems to be due to exaggerated oxidative stress and to increased inflammatory responses in the kidneys of hyperglycemic animals. However, these data have been obtained using experimental animals with absolute insulin deficiency due to beta-cell destruction8,9. Therefore, it is unclear whether acute hyperglycemia in nondiabetic animals would be equally injurious to renal function10.

This study was approved by the Institution's Ethics Committee in Animal Research. Thirty six male Wistar rats (250-320g body weight) were used in all experiments. The animals were anesthetized inside an acrylic compartment with an isoflurane/air/oxygen mixture. The trachea was intubated and the lungs were mechanically ventilated (Harvard Rodent Ventilator 683; South Natick, MA, USA) while respiratory rate, end-tidal CO2, and end-tidal isoflurane were monitored. A cervical anterior midline approach was used to cannulate the right jugular vein for the infusion of liquids and drugs. The same method was used to insert a catheter connected to a transducer and recorder (Datex Engstron, Finland) into the left carotid artery for monitoring mean arterial pressure, and to collect arterial blood samples. Rectal temperature was monitored and kept between 37°C and 38°C with the aid of a hot jelly blanket.

The animals were randomly allocated (using randomizing computer software) into six groups, six animals each, to receive anesthesia with isoflurane or propofol with or without hyperglycemia. Group assignments and procedures are summarized in Table 1.

Blood samples for the measurement of serum creatinine and glucose levels were collected after dissection of the left carotid artery, at baseline, before IRI, after IRI, and 24 hours after the end of the experiment.

Both kidneys were exposed through a midline abdomen incision and the right kidney was removed. Following treatment with isoflurane or propofol for 30 minutes, and the mobilization of the left kidney, the renal artery and vein were carefully dissected. Left renal ischemia was induced by placing an atraumatic microvascular clamp on both the renal artery and vein (ischemia). After 25 min of ischemia, the clamp was removed, and reperfusion was confirmed by watching the return of blood flow. At the end of this part of the experiment, the abdominal incision was closed and a blood sample was collected. The animals were then kept in plastic cages and fed standard rat chow and water ad libitum. Twenty-four hours after operation, the animals were anesthetized with isoflurane, blood samples were collected, left kidneys were removed for further analysis and the animals were sacrificed.

The histological analysis of hematoxylin-eosinstained kidney sections was performed by an examiner blinded to the treatment used. The severity of renal tubular damage was graded on a scale from 0 to 5 as follows: grade 0 = no damage, grade 1 (mild damage) = less than 10 % tubular necrosis, grade 2 (mild to moderate damage) = 10 to 25% tubular cell necrosis, grade 3 (moderate to severe damage) = 25 to 50% tubular cell necrosis, grade 4 (severe damage) = 50 to 75%, and grade 5 (severe to very severe) = greater than 75% tubular cell necrosis11. In addition, cells from the left kidney were evaluated for apoptosis by flow cytometry (FCM) as a percentage (%) of initial apoptosis (APTi) and viable cells (VC). Annexin V-FITC was used to determine the percentage of cells undergoing apoptosis, which show translocation of membrane phospholipid phosphatidylserine (PS) from the inner leaflet to the outer leaflet of the plasma membrane, thereby exposing PS to the external environment. Annexin V is a Ca2+ - dependent phospholipid-binding protein that has a high affinity for PS. Propidium iodide (PI) was used to distinguish viable from nonviable cells as the former have intact membranes that exclude PI, whereas membranes of dead or damaged cells are permeable to PI.

Data were expressed as mean ± SEM. Differences among groups were evaluated by analysis of variance and the Kruskal-Wallis test. Non-paired Student t test was used to analyze each variable. Differences were considered significant when p<0.05.

Clinical studies have documented the adverse effects of chronic hyperglycemia on patient outcomes12,13. Hyperglycemia is viewed as the primary mediator of a cascade of heart damaging events, starting from reactive oxygen species (ROS) formation and leading to myocardial ischemia, inflammation and death of myocytes14. Hyperglycemia acutely increases circulating cytokine concentrations by an oxidative mechanism, and this effect is more pronounced in subjects with impaired glucose tolerance (IGT). This suggests a causal role for hyperglycemia in the immune activation of diabetes. The role of hyperglycemia in inducing renal dysfunction is not completely understood. Several experimental studies have documented that renal ischemic injury in diabetic animals is worse than similar renal ischemic injury in normoglycemic animals10. This increase in renal injury seems to be due to exaggerated oxidative stress and to increased inflammatory responses in the kidneys of hyperglycemic animals. However, these data were generated by investigations using experimental animals that had absolute insulin deficiency due to beta-cell destruction8,9

It is unclear whether acute hyperglycemia in nondiabetic animals would be equally injurious to renal function10. In our study, pre-treatment with glucose produced transient hyperglycemia during the I/R period.

Propofol is known to produce a number of non-anesthetic effects. It stimulates constitutive nitric oxide (NO) production and inhibits inducible NO production. Propofol has also anxiolytic properties, which may be related to several neuromediator systems. Moreover, it has antioxidant, immunomodulatory, analgesic, antiemetic and neuroprotective effects. Furthermore, propofol inhibits both platelet aggregation and intracellular calcium increases in response to thrombin or ADP, and also has direct inhibitory effects on recombinant cardiac sarcolemmal KATP channels. All these beneficial properties are likely to expand the clinical use of propofol5. Propofol might provide protection via different mechanisms. After the onset of ischemia, it could be selected to reduce IRI4. It can attenuate oxidative injury of the pulmonary endothelium as detected by angiotensin-converting enzyme shedding in I/R and H2O2 models of acute lung injury15.

There is increasing evidence of anesthetic agent-induced protection. At present, isoflurane, sevoflurane and morphine appear to be most promising preconditioning-inducing agents4. The proposed mechanisms for this protection include an ischemic preconditioning-like effect, interference in the neutrophil/platelet-endothelium interaction, blockade of Ca2+ overload to the cytosolic space and antioxidant-like effect4. In a similar experimental model, it was showed that in animals receiving isoflurane, IPC had no protective effect. However, isoflurane in association with remifentanil had a beneficial effect on the kidney, as demonstrated by flow cytometry and serum creatinine levels2. High-dose propofol has been reported to attenuate lactate accumulation and edema formation in cerebral ischemia in hyperglycemic rats18.

In an experimental model of aortic reconstructive surgery, propofol anesthesia compared with sevoflurane was associated with less neutrophil infiltration, lower plasma proinflammatory cytokine levels, lower production of oxygen free radicals, less lipid peroxidation, and reduced inducible NO synthase activity. These findings suggest a potential renal protective effect of propofol in this surgical setting19. Erythropoietin is another drug with a potential renal protective effect during ischemia-reperfusion and transiently hyperglycemic20. After renal ischemia and reperfusion, rats anesthetized with isoflurane that were given N-acetylcysteine following anesthetic induction had less variation in serum creatinine 21.

The pretreatment of animals with propofol has led to reduction in the susceptibility to in vitro oxidative stress in five different tissues, demonstrating the drug ability to limit oxidative injury16.

In this study, 24 hours after I/R, serum creatinine in the hyperglycemic-ischemic groups (PHI and IHI) was statistically different from that in the other groups, indicating renal injury in the presence of ischemia and hyperglycemia.

Histological scores were higher in groups PHI and IHI, intermediary in groups PI and II, and lower in the sham groups (PHS and IHS), indicating a higher degree of lesion in the presence of hyperglycemia, without the protection of propofol or isoflurane. FCM showed significant apoptosis in the hyperglycemic-ischemia groups (PHI and IHI). Ischemia with normoglycemia produced intermediary APTi values, with no differences between propofol and isoflurane. The sham groups showed similar values which were lower than those found in the other groups. Viable cell percentage was statistically higher in the sham and normoglycemic groups than in the groups where ischemia was associated with hyperglycemia.

Propofol and isoflurane provided the same level of protection against ischemia reperfusion injury and no protection against renal injury with transient hyperglycemia. Transient hyperglycemia had a potential injury effect on the kidney after an episode of I/R. The control of blood glucose levels may be clinically used for limiting organ dysfunction after periods of tissue ischemia. 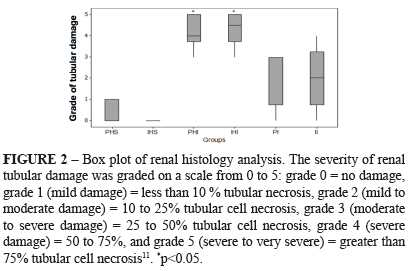 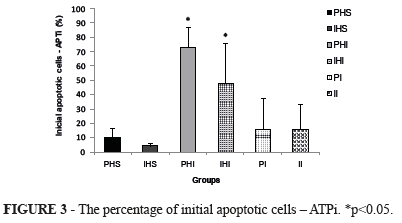 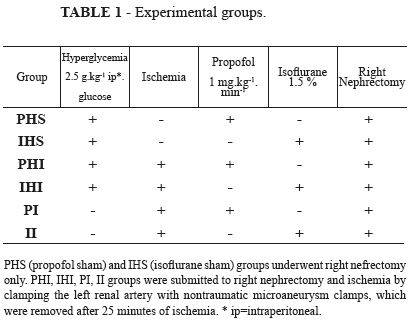