To compare the influence of two metallic implants in the diagnosis of periprosthetic infection using 99m technetium-labeled ceftizoxime.

Twenty rats were randomly divided into four groups, which received sterile and contaminated titanium and stainless steel implants. After 3 weeks, scintilographic images were obtained using a gamma chamber. Radioactivity counts were obtained for the region of interest (ROI) on the operated and non-operated paws.

Different biomaterials used in implants have an influence on the results of scintigraphy with 99mTc-CFT.

In recent decades, there has been an increase in the use of implants and biomaterials in different areas of medicine. At the beginning of the 1990s, in the United States of America (USA), approximately 4.4 million people had received some type of implant for fracture fixation and 1.3 million had an articular prosthesis11. Praemer A, Furner S, Rice DP. Musculoskeletal conditions in the United States. American Academy of Orthopaedic Surgeons. 1ed. Park Ridge; 1992.. Although these biomaterials represented an advancement in the treatment of articular diseases and fractures, the following two factors limit their application: biocompatibility and infections.

Infections represent the second most common complication related to the use of orthopedic implants, with an incidence of 1%-5.6% in arthroplasties22. Duff GP, Lachiewicz PF, Kelley SS. Aspiration of the knee joint before revision arthroplasty. Clin Orthop Relat Res. 1996;331:132-9. PMID: 8895629.

This study aims to compare the influence of the composition of two metallic implants (titanium and stainless steel) in the scintigraphic diagnosis of periprosthetic infections, using 99mTc-CFT as a radiopharmaceutical.

This study was approved by the ethics committee in animal experimentation of the Universidade Federal de Minas Gerais (protocol 150/2011).

Twenty 3-month-old Wistar rats, weighing an average of 322.5 g (230-390g), were used. Animals were housed in the vivarium at the UFMG Medical Faculty, with five animals per cage. The cages were kept in a temperature-controlled, ventilated area, with water and food ad libitum and natural day-night cycle and were monitored daily.

The sample size for the four groups was calculated using the software Minitab® version 14.1, by the ANOVA method, considering alpha = 0.05, test power > 0.90, and maximum deviation between the results equal to the value of the average. This resulted in five animals per group. The mean ± standard deviation (SD) values were established after completion of the pilot project.

Animals were anesthetized and kept under sedation by administration of an intra-peritoneal injection of xylazine/ketamine solution at a dose of 60mg/kg - 15 mg/kg. After the trichotomy of the left posterior paw was completed, it was disinfected with polyvinylpyrrolidone-iodine (Riodine®) in an antiseptic solution, followed by an alcohol-based solution, and protection with sterile fields. A longitudinal incision was formed at the thigh, dissecting the layers to expose the posterior diaphyseal region of the femur.

The metal implant was aseptically placed in direct contact with the bone in groups A and C and was placed after contamination in groups B and D. The suture was performed using 4-0 monofilament nonabsorbable nylon wire (mononylon®). After 3 weeks, the animals were transported to the Laboratory of radioisotopes for diagnostic examinations.

Metallic implants of titanium (Baumer®, São Paulo) and stainless steel (Baumer®, São Paulo) were used. The materials were constructed as cylinders (10 mm in length and 1.5 mm in diameter), with a smooth and polished surface, sterilized by ethylene oxide, and inserted using aseptic techniques.

For contamination of the implants, multi-sensitive strains of Staphylococcus aureus (ATCC6538P) were used. Bacterial colonies were cultured in blood agar, suspended in saline solution, and a concentration of 1×1099. Tunney MM, Patrick S, Curran MD, Ramage G, Hanna D, Nixon JR, Gorman SP, Davis RI, Anderson N. Detection of prosthetic hip infection at revision arthroplasty by immunofluorescence microscopy and PCR amplification of the bacterial 16S rRNA gene. J Clin Microbiol. 1999;37:3281-90. PMID: 10488193. CFU/mL was adjusted by nephelometry. The implants used in the animals of groups B and D were immersed in this suspension for 5 min before being implanted.

Ceftizoxime (Cefizox®, Smith-kline, Lisbon) was labeled using a 1.2 ml sodium pertechnetate solution (Na99mTcO4-), with a radioactivity of 481 MBq (IPEN, Brazil). The radiopharmaceutical was incubated for 10 min in a boiling bath (100°C) and cooled under running water for 5 min. After cooling, the solution was filtered through a 0.22-μm cellulose ester membrane and collected in a vacuum flask. The complete CTF labeling procedure was performed according to the procedure followed by Diniz et al.33. Hanssen AD, Rand JA. Evaluation and treatment of infection at the site of a total hip or knee arthroplasty. Instr Course Lect. 1999;48:111-22. PMID: 10098033.

After labeling ceftizoxime with 99m-technetium (99mTc-CFT), ampules containing approximately 0.1ml (62.9 MBq) of the solution were subjected to radioactivity count using a well counter (Wizard®, Turku/Finland) and then administrated into the tail vein of anesthetized animals.

Scintigraphy was performed after 390 min, using a gamma chamber with a low-energy collimator for the acquisition of layered static images over a 10-min period, using a matrix of 256 × 256 pixels (Nuclide® TH 22, Mediso, Hungary).

Radioactivity counts were performed in the region of interest (ROI) of the operated paw (target area) and non-operated paw (non-target area) to determine the total concentration and target/not target ratio (Figure 1).

Thumbnail
Figure 1
Radioactivity counts of the region of interest (ROI) and illustration of the counted area in the contralateral region (non-target).

After the radioactivity counts were performed, animals were euthanized by anesthetic overdose, and the implant was removed and incubated in Trypticase soy broth. The paw was disarticulated and kept under refrigeration for calculating the radioactivity count/minute per gram (cpm/g) of the tissue after 48 h of decay.

Results were analyzed by subjective evaluation of the images, separating them into homogeneous or heterogeneous. The quantitative variables considered were radioactivity count of ROI, ratio between the operated and non-operated paws (ROI target/non-target), and cpm/g of the tissue after 48h of decay of radioactivity. The comparison between groups with the same implant (A/B) and (C/D) determined the effectiveness of test in detecting the infection. The aim of the comparative analysis between control groups (A/C) and (B/D) was to evaluate the influence of the type of implant on the effectiveness of the method.

All quantitative results were presented as mean ± SD. Data were compared by the Kruskal-Wallis test, using SPSS® for Windows, version 17.0 (Chicago, United States). A confidence interval of 95% was used, and the differences were considered statistically significant when p value was less than or equal to 0.05 (p≤0.05).

In the animals of the control groups, all implant cultures were negative after incubation for 5 days. All samples from the contaminated groups showed bacterial growth.

In the evaluation of the images, groups A, B, and C showed a homogeneous distribution of the radiopharmaceutical. Thus, it was not possible to differentiate between operated and non-operated groups (Figure 2). In all animals of group D, evident hyper-uptake was observed in the operated paw, both in the early and later images (Figure 3).

The radioactivity mean counts of the operated paw (ROI target), non-target paw, and the target/non-target ratio are represented in Table 1.

The ROI target count was higher in the two groups that used stainless steel implants than that in the groups that used titanium implants. After 390 min, the counts between the control groups (A/C) were higher in group C, with a significant difference (p = 0.016). In the contaminated groups (B/D), group D had higher counts than those of group B (p = 0.041) (Figure 4).

Thumbnail
Figure 4
Comparison between mean total count of the region of interest of the target paw, 390 min after injection of 99m Tc-CFT.

The target/non-target ratio was significantly lower in group A than in group B (p = 0.038). Similar results were observed in groups C and D that had stainless steel implants (p = 0.048). However, comparing the control (A and C) and contaminated groups (B and D), the difference was significant only in the control groups (p = 0.001). Similar results were not observed in the contaminated groups (p = 0.348). The target/non-target ratio averages for the groups studied are shown in Figure 5.

The main characteristic of periprosthetic infections is the formation of biofilms, which allows the confinement of organized bacterial colonies that are protected against the actions of host defense and antimicrobial agents33. Hanssen AD, Rand JA. Evaluation and treatment of infection at the site of a total hip or knee arthroplasty. Instr Course Lect. 1999;48:111-22. PMID: 10098033.,88. Gristina AG, Costerton JW. Bacterial adherence to biomaterials and tissue: The significance of its role in clinical sepsis. J Bone Joint Surg. 1985;67:264-73. PMID: 3881449.,1313. Vuong C, Gerke C, Somerville GA, Fischer ER, Otto M. Quorum-sensing control of biofilm factors in Staphylococcus epidermidis. J Infect Dis. 2003;188:706-18. PMID: 12934187.. This process forms a complex structure that makes the treatment, diagnosis of infections, and/or isolation of the pathogen by traditional microbiological methods difficult. Implant composition also changes the local microenvironment, leading to foreign body-type reactions that can influence diagnostic methods.

Comparison between the control and contaminated groups showed that the method is useful for diagnosing infections, regardless of the composition of the periprosthetic metal used. However, we observed two patterns of results that were determined by the type of material used. In the group with titanium implants, the radioactive counts were lower, with less variability and less significant values between the contaminated and control groups. The images were also similar between these groups. In the groups that used stainless steel implants, the counts showed higher values, with a great variability in the counts, and all values were lower in the control group. The visual images also differed, which suggests the presence of an infection.

This difference can be explained by the interaction between the implant and host. Of the metals, titanium alloys are less prone to infections compared with stainless steel alloys and chromium cobalt1616. Cordero J, Manuera L, Folgueira MD. Influence of bacterial strains on bone infection. J Orthop Res. 1996;14:663-7. PMID: 8764878.

On evaluating the group with titanium implants, the images did not clearly detect the presence of an infection. According to the study conducted by Phillips2020. Phillips WT. Delivery of gamma-imaging agents by liposomes. Adv Drug Deliv Rev. 1999;37:13-32. PMID: 10837724., the target/non-target ratio must present minimum values of 1.5, i.e., 50% more activity in the target compared with that in the contralateral region (non-target), for the images to differentiate local uptake. As the value of the target/non-target ratio observed in the groups with titanium implants was only 1.6, it was difficult to produce clear images that would guarantee the presence of infection. Thus, in the case of negative images, the examination should be based on the local radioactivity count and its relationship with the contralateral side.

Therefore, in our study, an image with evident hyper-uptake confirms the presence of infection. However, if the images are negative, the target/non-target ratio should be considered. Studies in humans and with a larger sample size are needed to determine the cut-off value that indicates infection in examinations with homogeneous images. A recent study suggests that the association of 99mTc-CFT with liposomes can increase its effectiveness2121. Ferreira SM, Domingos GP, Ferreira Ddos S, Rocha TG, Serakides R, de Faria Rezende CM, Cardoso VN, Fernandes SO, Oliveira MC. Technetium-99m-labeled ceftizoxime loaded long-circulating and pH-sensitive liposomes used to identify osteomyelitis. Bioorg Med Chem Lett. 2012;22:4605-8. PMID: 22726927..

Scintigraphy with 99mTc-CFT was effective in the diagnosis of periprosthetic infections; however, different biomaterials used in implants have an influence on the outcome.

Figure 1   Radioactivity counts of the region of interest (ROI) and illustration of the counted area in the contralateral region (non-target). 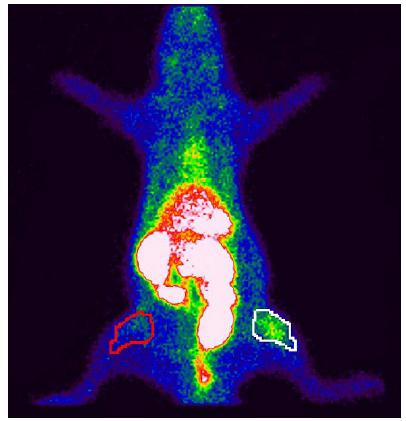 Figure 2   Homogeneous pattern of representative images of animals from groups A, B, and C 390 min after an injection of 99mTc-CFT. 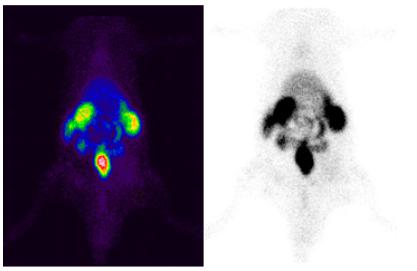 Figure 3   Heterogeneous pattern of scintigraphic images of animals of group D, 390 min after an injection of the radiopharmaceutical.

Figure 4   Comparison between mean total count of the region of interest of the target paw, 390 min after injection of 99m Tc-CFT. 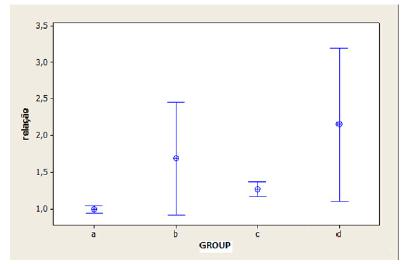