Full Professor, Department of Urology, Medical Faculty, University of Kirikkale, Turkey. Conception and design of the study, interpretation of data.

To investigate the biochemical, histopathologic, and spermatogenetic changes in the detorsionated testicle after experimental torsion and to study the antioxidant effects of pheniramine maleate and nebivolol.

Pheniramine maleate and nebivolol have antioxidant effects against ischemia-reperfusion damage. They also support tissue recovery, which is more significantly observed by nebivolol.

An acute scrotum is a pediatric urologic emergency and commonly presentesas the torsion of the testis or appendix testis. Testicular torsion occurs due to rotation of the spermatic cord and its accessories because of the anastomosis free terminal testicle artery and the nonelastic structure of the tunica albuginea, leading to the blockage of the arterial and venous blood flow.

Besides the blockage of testicular blood flow, ischemia reperfusion (I/R) damage developing due to the defense system of the testicle plays an important role in the formation of atrophy and loss of testicular functions. It is believed that detorsion of the testis and the resulting reperfusion alone may not be sufficient for preventing testicular damage, and the antioxidant factors have attracted interest in recent years due to their damage-prevention and recovery effect.

Pheniramine maleate (PM) is an alcylamine-derived H1 antihistaminic, mostly used for the symptomatic treatment of allergies and the flu due to its high agregation capacity to cell membranes because of its lipophilic features and resulting prevention of the formation and/or secretion of free radicals and its anti-inflammatory effect11 Gokalp O, Yurekli I, Kiray M, Bagriyanik A, Yetkin U, Yurekli BS, Gür S, Aksun M, Satoglu IS, Gokalp G, and Gürbüz A. Assessment of protective effects of pheniramine maleate on reperfusion injury in lung after distant organ ischemia: a rat model. Vasc Endovasc Surg. 2013;47(3):219-24. PMID: 23377174..

There are studies on the antioxidant function of PM and NB on several tissues, but to our knowledge, this is the first study on their effect in testis tissue and I/R damage. The study has three aims: to evaluate the histopathologic, biochemical, and spermatogenetic changes in the ipsilateral testis tissue after torsion and to investigate the effects of PM and NB on detorsionated testis tissue.

This experimental study was approved by the local animal experiments ethic commitee (06.03.14/275) according to the Declaration of Helsinki and performed in the Experimental Animal Laboratory of Ankara Training and Research Hospital. The animals were maintained and used in accordance with the Animal Welfare Act and the Guide for the Care and Use of Laboratory Animals.

In this study, 24 Sprague-Dawley male rats weighing 250-300 g were used. The animals were preserved in metal cages and were fed standard food and tap water. They were kept in an environment with a controlled temperature (21-22°C), humidity (55%-60%), and controlled photoperiod (12/12 hr light/dark) for 1 week before the start of the experiment. The body temperature of the rats was maintained using a heating lamp. The rats were randomly divided into four groups (n = 6 per group).

The rats were anesthetised with xylazine hydrochloride 10 mg/kg (Rompun, Bayer-Istanbul) and ketamine 50 mg/kg (Ketalar, Pfizer Pharma Istanbul) intramuscularly under sterile conditions. The right testis was entered through a midline incision by opening the scrotum and the lamina parietalis of the tunica vaginalis, and T/D was induced by rotating the right testis 720° in a clockwise direction for 2 hr. 1 hr after torsion, group 3 and 4 rats received a single dose medication. Then, the testis was counter-rotated to the natural position and was inserted into the scrotum; the skin incision was sutured (6-0 polypropylene), and animals were kept until harvesting time. We removed the right testes of six animals from each study group 4 hr after detorsion (six hours after initiation of the experimental procedure) for the evaluation of oxidant/antioxidant balance and histopathological analysis.

All statistical examination was carried out using SPSS version15.0 (SPSS; Chicago, IL, USA). Student t and Oneway ANOVA test with Bonferroni adjustment were used for comparing normally distributed data. Subsequently, the relation between these parameters was evaluated using linear regression analysis (Backward). These distinctions were accepted significant when possibility was less than 0.05.

A TAS kit is used for the measurement of the TAS.

The TAS level was determined using the method developed by Erel. The principle of the method was based on the chemical reduction of the blue-green colored ABTS radical into the colorless ABTS form by the antioxidants. For the measurement, a spectrophotometer (Shimadzu UV 1700A) was used at 250C. Serum TAS levels were calculated in mmol Trolox equivalent/L with the formula TAS= [(ΔAbs standard 1)-(ΔAbs sample)] / [(ΔAbs standard 1)-(ΔAbs standard 2)]77 Erel O. A novel automated direct measurement method for total antioxidant capacity using a new generation, more stable ABTS radical cation. Clin Biochem. 2004;37:277-85. PMID: 15003729..

TOS levels were determined using a TOS kit, which operates on a novel automated and colorimetric measurement method, as previously described by Erel. The principle of the method is based on the oxidation of ferrous ion-chelate complex to ferric ions by the oxidants in the sample. The same spectrophotometer as described above was used, and serum TOS levels were calculated with the formula TOS= [(ΔAbs serum) / (ΔAbs standard)] x 20 in μmol H2O2 equivalent/L88 Erel O. A new automated colorimetric method for measuring total oxidant status. Clin Biochem. 2005;38:1103-11. PMID: 16214125..

The evaluation of the torsion groups according to the Johnsen testicular biopsy score indicated that histopathologically degeneration, desquamation, disorganisation of germinal cells, interstitial oedema, capillary congestion, and hemorrhage were observed as statistically significantly higher in Group 2 compared to Groups 3 and 4 (Table 2) (Figure 1). The Johnsen testicular biopsy score is detected to have decreased in Groups 3 and 4, but the decrease was not statistically significant. 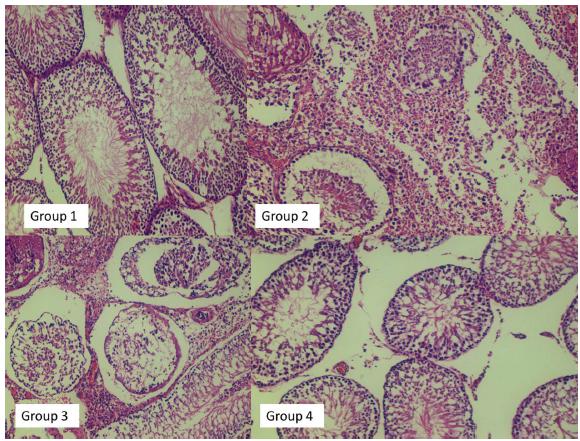 Testis torsion is an emergency requiring prompt diagnosis and necessary surgical intervention to prevent testicular necrosis or dysfunction, which may result in future infertility and therefore is a major fear of the families of the boys affected. Testicular torsion is primarily observed in boys in the neonatal or puberty period. The yearly incidence among boys younger than 18 years is 3.8/100000, and surgical intervention is required in 41.9 % of cases1010 Zhao LC, Lautz TB, Meeks JJ, Maizels M. Pediatric testicular torsion epidemiology using a national database: incidence, risk of orchiectomy and possible measures toward improving the quality of care. J Urol. 2011;186(5):2009-13. PMID: 21944120..

Two determinant factors of testicular atrophy are the time period between the beginning of the symptoms and the detorsion and the rotation degree of the spermatic cord. The occurance of severe testicular atrophy is variable; it may occur in a short time, e.g., 4 hours if the spermatic cord is twisted 360 degrees, or no atrophy can be detected in cases with incomplete torsion (180-360°) even after 12 hours1111 Sessions AE, Rabinowitz R, Hulbert WC, Goldstein MM, Mevorach RA. Testicular torsion: direction, degree, duration and disinformation. J Urol. 2003;169:663-5. PMID: 12544339..

In another study, the complete deterioration in spermatogenesis after unilateral testis torsion was found to occur in 50% of the cases where a borderline deterioration is observed in 20% of the other 50%1212 Visser AJ, Heyns CF. Testicular function after torsion of the spermatic cord. BJU Int. 2003;92:200-3. PMID: 12887467.. Another study revealed subfertility in 36-39% of patients after unilateral testis torsion/detorsion. In the long-term follow-up of these, normal semen parameters were found in 5-50%1313 Anderson MJ, Dunn JK, Lipshultz LI, Coburn M. Semen quality and endocrine parameters after acute testicular torsion. J Urol. 1992;147:1545-50. PMID: 1593686..

Subfertility and infertility are primarily associated with the blockage of the testicular blood flow, but free radicals developing after reperfusion also play an important role. Testis torsion causes ischemic damage where detorsion is responsible for the development of biochemical and structural changes in the tissue. Studies have shown that ischemia reperfusion tissue damage occurs due to free oxygen radicals (FORs). FORs disrupt the structural elements of the tissue and cause damage. Many studies have reported on I/R damage and the effects of antioxidant therapy in reducing this damage. There are several antioxidant defense mechanisms to remove FORs in the cells. Reperfusion damage is found to be closely associated with neutrophil infiltration and the increase in FORs. These FORs increase the membrane’s permeability because of the peroxidation of its lipid elements, protein denaturation, and cell damage. They also enhance the germ cell damage due to ischemia1414 Cuzzocra S, Riley DP, Caputi AP, Salvemini D. Antioxidant therapy: a new pharmacological approach in shock, inflammation, and ischemia/reperfusion injury. Pharmacol Rev. 2001;53(1):135-59. PMID: 11171943.

TAS measurement gives more information than the measurement of the antioxidants individually. For this reason, TAS measurement is widely used to determine the total antioxidant capacity. Studies have shown that PON may be an indicator of the antioxidant system of the body and therefore can be used as a biomarker2525 Topsakal C, Kilic N, Ozveren F, Akdemir I, Kaplan M, Tiftikci M, Gursu F. Effects of prostaglandin E1, melatonin, and oxytetracycline on lipid peroxidation, antioxidant defense system, paraoxonase (PON1) activities, and homocysteine levels in an animal model of spinal cord injury. Spine. 2003;28:1643-52. PMID: 12897486.

26 Costa LG, Giordano G, Furlong CE. Pharmacological and dietary modulators of paraoxonase 1 (PON1) activity and expression: the hunt goes on. Biochem Pharmacol. 2011;81:337-44. PMID: 21093416.-2727 Vasdev S, Gill V, Singal PK. Benecial efect of low ethanol intake on the cardiovascular system: possible biochemical mechanisms. Vasc Health Risk Manag. 2006;2:263-76. PMID: 17326332.. The OSI is a parameter showing the tendence of oxidants and antioxidants in the oxidant/antioxidant balance and can be calculated by the division of the total oxidants by the total antioxidants. The OSI is a marker that can indicate lipid peroxidation, protein oxidation, and DNA damage caused by the uncompensated free radicals formed due to the increase of the oxidants or decrease of the antioxidants. In addition, several methods are used to evaluate the oxidative stress and the antioxidant status, but higher costs and time investment are needed to determine and measure them individually. Therefore, TOS, TAS, and PON are measured and the OSI has been calculated in recent years2828 Kohen R, Nyska A. Oxidation of biological systems: oxidative stress phenomena, antioxidants, redox reactions, and methods for their quantification. Toxicol Pathol. 2002;30:620-50. PMID: 12512863..

In our study, we detected that the application of PM and NB has increased TAS and decreased TOS and the OSI, indicating the antioxidant feature of PM and NB. Histopathologically, it was detected that in the study groups with PM and NB application, the I/R damage tended to recover, which was observed more potently in the NB group. According to these results, we can see that NB has an antioxidant effect, protects the testis tissue, and supports recovery histopathologically by testis torsion. We observed similar effects with PM as well, but not as potent as NB.

In this study, it was shown that I/R damage occurs after testis torsion histologically and biochemically, which caused impaired spermatogenesis and may eventually lead to subfertility and infertility. PM and NB have reversed this negative effect after a single administration. These results are promising for the use of these agents as future drugs to recover testis damage. PM and NB treatments also decreased the OSI and TOS levels significantly and increased the PON and TAS levels, which indicate the antioxidant capacity in the testis tissue (Table 1). Oxidative stress activates pathways for the synthesis of proinflammatory cytokines and cell adhesion molecules. For this reason, oxidative stress may have a positive effect on the inflammatory response after testis I/R induced by endotoxemia. Our data revealed that spermatogenetic dysfunction due to oxidative stress developed after testis I/R and that PM, and more significantly, NB application provides histopathological enhancement (Figure 1). The findings of this study support the consideration that PM and NB protect testicular function after I/R by reducing the oxidative stress.

Pheniramine maleate and nebivolol have antioxidant effects against ischemia-reperfusion damage. They also support tissue recovery, which is more significantly observed by nebivolol.