PURPOSE: Temozolomide (TMZ) has anti-tumor activity in patients with malignant glioma. Hyperbaric oxygen (HBO) may enhance the efficacy of certain therapies that are limited because of the hypoxic tumor microenvironment. We examined the combined effects of TMZ-HBO in a rat glioma model. METHODS: After stereotactic injection of C6/LacZ rat glioma cells into the Wistar rats brain, the rats were randomly assigned to three treatment groups [group 1, control treatment; group 2, TMZ alone; group 3, a combination of TMZ and HBO]. Rats were sacrificed 18 days after treatment, and number of intra-/peri-tumoral vessels, microendothelial proliferations, immunohistochemistry and necrotic area were evaluated. RESULTS: Tumoral tissue was stained only sparsely with GFAP. Temozolomide treatment was significantly decreased in tumor tissue intratumoral vessel number / total tumor area level. The level of Ki67 was significantly decreased in the tumor tissue of the group 3. Additionally, the total necrotic area / total tumor volume (%) was decreased significantly in tumor tissue of the group 3 rats compared to group1 and 2. CONCLUSION: The combination of hyperbaric oxygen with temozolomide produced an important reduction in glioma growth and effective approach to the treatment of glioblastoma.

VProfessor, Department of Histology and Embryology, Institute of Oncology, Faculty of Medicine, Istanbul University, Turkey. Supervised all phases of the study and interpretation of data

PURPOSE: Temozolomide (TMZ) has anti-tumor activity in patients with malignant glioma. Hyperbaric oxygen (HBO) may enhance the efficacy of certain therapies that are limited because of the hypoxic tumor microenvironment. We examined the combined effects of TMZHBO in a rat glioma model.

CONCLUSION: The combination of hyperbaric oxygen with temozolomide produced an important reduction in glioma growth and effective approach to the treatment of glioblastoma.

Glioblastomas are the most frequent types of intracranial tumors, and locally infiltrating, aggressive and hypervascularized tumors with a median survival rate of less than one year. The current therapy is cytoreductive surgery followed by radiotherapy, with a more limited role for adjuvant chemotherapy. Glioblastomas are dependent on angiogenesis, as proliferation of microvascular endothelial cells14.

Temozolomide (TMZ), in many cancers including gliomas, has broad-spectrum anti-tumor activity5. Temozolomide penetrated excellent into the brain tissue is agent an oral imidazotetrazinone methylating. Also, inhibition of protein kinase C has been implicated as a possible mechanism of action6.

In high-grade gliomas have been found to be areas hypoxic. In particular, the C6 line has demonstrated tumor hypoxia when used in experimental models. Hypoxia may decrease the effectiveness of adjuvant therapy7,8. Hyperbaric oxygen treatment (HBO), which in turn will improve the radiation response in solid tumors, including gliomas, will enhance the oxygen tension in tumors9-11.

In the present study, we evaluated the effects of the combination treatment with temozolomide and hyperbaric oxygen in a rat brain tumor model using C6 glioma cell line.

The rat glioblastoma cell line C6 was obtained from ATCC (Rockville, USA) and serial passages were made at the Histology and Embryology Department of Istanbul Medical School in modified Eagle medium of Dulbecco, which contained 15% heat inactivated fetal calf serum, 0.2 mM glutamine, 50 mg/ml neomycin, and 100 mg/ml streptomycin. Culture flasks were kept in electronic incubator (Sanyo) under humidified atmosphere with 5% CO2 at 37°C.

Cells were harvested via 2 ml trypsin- EDTA solution C (Biological Industries, Israel) and centrifuged after the addition of 1.5 cc of F12 medium and fetal calf serum mixture at 1x103 rpm for three minutes. After removing the supernatant, pellet was resuspended with 2 cc of medium. Cell suspension was concentrated; so that 5 microliters of any injection volume would contain 5x105 cells, and then placed in a microcentrifuge tube, and kept in a water-ice mixture environment during the whole implantation procedure, which always lasted less than 2 hours.

Male Wistar rats, weighing between 260 and 300 grams, were anesthetized by intramuscular injection of a solution containing 42.8 mg/ml of 10% ketamine and 8.6 mg/ml of 2% xylazine (this dosage did not exceed 0.7 mg/kg of body weight in total). The rats were secured into a stereotaxis apparatus (Trent Welles Inc., South Gate, Ca, USA). After antiseptic preparation of the scalp with betadine, the skin was incised on the mid-sagittal line for 1 cm. A burrhole (1.5 mm wide) was made on the right side 3 mm lateral to midline, and 2 mm proximal to the bregma using a dental drill. Injection of the C6 glioma cell suspension was made using a Hamilton syringe with a 27 gauge needle, which was fixed to the manipulation arm of the stereotaxis apparatus and advanced to the center of the right caudate nucleus which was 5 mm deep to the surface of the brain. A total of 5 ml solution was injected over a 5 minute of time in 0.5 μl aliquo. The needle was kept in same place for an additional 3 minutes and then withdrawn very gently over two minutes. The operation area was irrigated with saline and the burrhole was covered with bone-wax. The scalp was sutured using 5-0 vicryl.

All animals underwent implantation of guide screws and after one week they were divided into three groups. For all animals (21 rats), 5x105 C6/LacZ glioma cells were injected and the animals were sacrificed 18 days later following specific treatment. Animals in group 1 (Control, seven rats) were treated by saline (23 ml/kg/day) p.o. daily from 11th to 15th day. Animals in group 2 (TMZ treated, n=7) were treated by temozolomide, which was administered at a dose of 150 mg/m2/day by gastric catheter (6°F ) doses of temozolomide (Temodar, Scherling-Plough) on days 1115 after tumor implantation. Animals in group 3 (TMZ and HBO combination treated n=7) were treated by the combination of hyperbaric oxygen (2.0 atm, 712 exposures, seven days) and temozolomide.

The i1, i2, Ki67 and necrotic area values for the different groups are shown in Table 1.

Histopathologically, all tumors contained pleomorphic cellular elements, mostly with vesicular nuclei and moderate amounts of eosinophilic cytoplasm; mitotic figures and atypical nuclei were medium, as well as necrosis with pseudopalisading. Tumoral tissue was stained with GFAP (Figure 1a).

The i1 levels in the group 1 and 3 were increased (Figure 1b); however, Temozolomide treatment was significantly decreased in tumor tissue i1 level (p<0.05) (Figure 1c). For i2 level in group 2 and 3 was found to be not different than that of the control group.

Data obtained from the rat glioma model of this study indicate that the combination of TMZ and HBO significantly inhibits cell proliferation, angiogenesis and induce the stimulation of apoptosis compared with the effect of TMZ alone.

TMZ suggests capability as an effective chemotherapeutic agent for the treatment of patients with malignant glioma12. TMZ is quickly absorbed after oral administration and is cleaved in vivo to monoethyl triazenoimidazole carboxamide, a reactive DNA methylating species13. TMZ has excellent central nervous system entry, and reaches the brain in therapeutical concentrations14. Son et al.15 found that treatment with TMZ alone significantly decreased the number of proliferating cell nuclear antigen-positive proliferating cells and increased the number of TUNEL-positive apoptotic cells. Kim et al.16 demonstrated that temozolomide inhibited the growth of tumors and was accompanied by a reduction in tumor cell proliferation and induction of apoptosis. In the present study, TMZ treatment was significantly decreased in tumor tissue intratumoral vessel number. This result is similar to the reports by other authors that temozolomide inhibits angiogenesis.

Hypoxia in tumor tissue restricts the efficacy of treatment. Malignant cells in hypoxic fields are exposed to lower drug concentrations because of the limited access of parenterally administered drugs17. Additionally, these cells in hypoxic regions are less susceptible to radiotherapy, which target rapidly proliferating cells. Furthermore, hypoxia directly influences the expression of numerous gene products that are involved in angiogenesis, apoptosis, and glycolysis17. Tumor hypoxia in human malignant glioma has been studied by direct and indirect measurements. In direct pO2 measurement, Kayama et al.18 found that the intratumoural pO2 value was significantly lower than that of the surrounding brain. Hypoxia is suggested to contribute to the resistance of gliomas to radiosurgery, radiation therapy, and chemotherapeutic agents such as temozolomide19. Kohshi et al.20 in study multivariate analysis a small series revealed that combination with HBO was a good predictive prognostic factor for survival. Radiotherapy after HBO exposure is one of the initial treatment options for patients with malignant gliomas. Stuhr et al.21 shown that repeated HBO induces an anti-angiogenic effect in the dimethylbenzanthracene induced tumors. The Ki-67 protein is a cellular marker for proliferation22. Ki-67 immunostaining of a brain tumor associated with a high proliferative rate. In our study, the level of Ki67 was significantly decreased in the tumor tissue of the group 3 compared to the group 2. Additionally, the total necrotic area / total tumor volume (%) was decreased significantly in tumor tissue of the group 3 rats compared to group1 and 2.

The combination of hyperbaric oxygen with temozolomide produced an important reduction in glioma growth and effective approach to the treatment of glioblastoma. The treatment demonstrated an inhibition to rat glioma tumors, a significant decrease in cell proliferation and an increase in apoptosis. 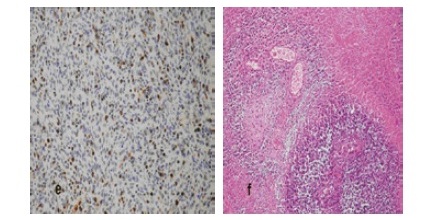