Why the surgical patients are so critical in their intensive care unit arrival?

PURPOSE: To assess the ability of the Acute Physiology and Chronic Health Evaluation II (APACHE II) to stratify the severity of illness and the impact of delay transfer to an Intensive Care Unit (ICU) on the mortality of surgical critically ill patients. METHODS: Five hundred and twenty-nine patients (60.3% males and 39.7% females; mean age of 52.8 ± 18.5 years) admitted to the ICU were retrospectively studied. The patients were divided into survivors (n=365) and nonsurvivors (n=164). APACHE II and death risk were analysed by generation of receiver operating characteristic (ROC) curves. The interval time between referral and ICU arrival was also registered. The level of significance was 0.05. RESULTS: The mean APACHE II and death risk was 19.9 ± 9.6 and 37.7 ± 28.9%, respectively. The area under the ROC curve for APACHE II and death risk was 0.825 (CI = 0.765-0.875) and 0.803 (CI = 0.741-0.856). The overall mortality (31%) increased progressively with the delay time to ICU transfer, as also evidencied by the APACHE II score and death risk. CONCLUSION: This investigation shows that the longer patients wait for ICU transfer the higher is their criticallity upon ICU arrival, with an obvious negative impact on survival rates.

Why the surgical patients are so critical in their intensive care unit arrival?1 1 Research performed at Division of Intensive Care of Department of Surgery, Ribeirão Preto Medical School, University of São Paulo (USP), Brazil.

PURPOSE: To assess the ability of the Acute Physiology and Chronic Health Evaluation II (APACHE II) to stratify the severity of illness and the impact of delay transfer to an Intensive Care Unit (ICU) on the mortality of surgical critically ill patients.

METHODS: Five hundred and twenty-nine patients (60.3% males and 39.7% females; mean age of 52.8 ± 18.5 years) admitted to the ICU were retrospectively studied. The patients were divided into survivors (n=365) and nonsurvivors (n=164). APACHE II and death risk were analysed by generation of receiver operating characteristic (ROC) curves. The interval time between referral and ICU arrival was also registered. The level of significance was 0.05.

CONCLUSION: This investigation shows that the longer patients wait for ICU transfer the higher is their criticallity upon ICU arrival, with an obvious negative impact on survival rates.

The treatment of severely ill patients represents an enormous challenge to Medicine and Health Management organs worldwide. Indeed, over the last decade there has been a marked enhancement in the number of new techniques, procedures and high-tech devices, which in turn has resulted in a higher demand for human resources, with obvious financial consequences. In the USA alone, it is estimated that US$ 82 billion dollars/year are spent on the treatment of critical patients hospitalized in Intensive Care Units (ICU). If on the one hand the number of hospital beds has decreased by approximately 4.2% over the last years, the number of ICU beds has risen at a higher rate (6.5%), which has increased hospitalization costs. In this context, ICU bed/day cost has risen from US$ 2,698 to US$ 3,5181. Therefore, the purpose of an ICU is to provide the best treatment possible so that patients will have a more satisfactory prognosis.

In this context, a number of studies have stated that optimization of the treatment delivered to patients admitted to an intensive care unit (ICU) should not rely solely on knowledge about procedures and clinical protocols. Implementation of risk management, performance, number of ICU beds and early transfer of patients to this unit and outcome prediction programs should also be considered2-4.

The aim of this study is to assess the ability of the Acute Physiology and Chronic Health Evaluation II (APACHE II) prognostic index score system to stratify patient's illness severity and the impact of delay time to ICU transfer on the mortality of surgical patients admitted in a tertiary medical school hospital.

This study was conducted in a 9-bed ICU of Clinics Hospital of Ribeirão Preto Medical School of the University of São Paulo (FMRP-USP). The research protocol was approved by the Research Ethics Committee of Hospital das Clínicas da Faculdade de Medicina de Ribeirão Preto (Protocol 7076/2010). Surgical adult patients admitted to the ICU between 2008 to 2010 were analyzed. Data relative to diagnosis upon admission, comorbidities, complications in the ICU setting, APACHE II and Death Risk scores were recorded. Demographic data by comparison of groups of patients designated survivors and nonsurvivors are also reported. Data for calculation of the APACHE II death risk score were collected during the first 24 hours after patient admission. The APACHE II scoring system takes account of 12 physiological variables, as well as Glasgow coma scale (calculated when the effect of anesthetic agents was abolished), age, occurrence of urgent surgical procedures, and comorbidities verified in the patient's medical records. Thus, the time interval (delay time) between the request for an ICU bed and admission was also recorded. The adopted criteria was the interval (in hours) between the referral of the patient to ICU from the recovery room or surgical wards and ICU arrival. From initial 529 patients enrolled in the study, the delay time was explored in 433 patients (82.6%), since information for the remaining patients (n = 96, 57 patients survivors and 39 nonsurvivors) regarding the time interval from referral and ICU admission were either missing or not entirely reliable.

Comparison of demographic and clinical data of the patients (survivors and nonsurvivors), APACHE II and death risk versus delay time intervals were accomplished by employing the two-tail Student t-test for means. Variables are expressed as mean ± standard deviation. The ability of the APACHE II index and death risk to predict mortality of ICU patients was described by receiver-operator characteristic curves (ROC). The area under the ROC curve (AUC) was used as a measure of the overall index accuracy, and its significance was tested by means of the Wilcoxon test. The significance level was set at 0.05. The statistical analyses were performed using the SAS software version 9.2 (SAS Institute, Cary, NC, USA).

The survival rates decreased progressively, according to delay time interval observed (< 24, 25-48, 49-72 hours) and remained stable in late referral (73-96 hours) as shown in Figure 2. The APACHE II score and death risk were statistically singnificant lower in the survivors group when compared to nonsurvivors (p<0.05) in all delay time intervals as demonstrated in Table 3. 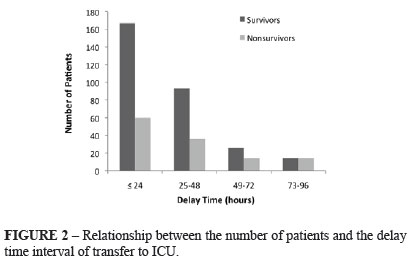 The ICU aims to provide severely ill patients admitted to this setting with the best treatment possible, so that a better outcome can be achieved. However, the high costs involved in the care delivered to critical patients allied with the increasing lack of resources call for implementation of control measures. In this sense, evidence-based procedures and techniques as well as precise assessment of the clinical status of the patients by means of prognostic indexes may be indicative of the health service quality. Therefore, several prognostic indexes are utilized in the ICU setting. Among them, APACHE II4 should be highlighted. This prognostic index still remains as the most employed index in the ICU worlwide. Data collection is observed 24 hours after the surgery and reveals the clinical status of the patient at ICU arrival. Calculation of the death risk on the basis of the APACHE II score increases the predictive ability. In Brazil, the Public Health Authorities require the obligatory use of a prognostic index in the ICU context and maybe in the future these indexes could be a powerful tool to plan clinical strategies and resources allocation5.

The currently available predictive systems were conceived for analysis of the severity of illness and approximate calculation of mortality in a case mix of patients admitted to the ICU. Thus, APACHE II has been demonstrated to be efficient for prediction of mortality in an extended series of studies. This prognostic index has been proven to be adequate, with area under the ROC curve always lying above 0.81 for clinical and/or surgical case mix6,7, severe sepsis8 and, prediction of early mortality after orthotopic liver transplantation9. It is noteworthy that only 18% of the patients admitted to our ICU had an APACHE score lower than 10, in contrast with other reports showing a variation between 22.4 and 56%, depending on the particularities of each hospital7.

All the nuances, such as the characteristics of each ICU, the type of hospitalized patient, the health system ruling the institution, the cultural and geographical differences, the staff composition, the size of the hospital and, most importantly, failures in institutional structure, like insufficient number of ICU beds, must be considered to ensure the success of this strategy.

The data of this study clearly demonstrate that the delay time to ICU transfer was responsible for the progressive increased severity of the clinical status presented by the patient and increased risk of death, as detected by APACHE II, at the patient's arrival to the ICU. This delay in the transfer of the patient is associated to the small number of ICU beds offered to various sectors of the Hospital by the institution. Therefore, one of the principal limitations concerning the reduction in the mortality of ICU patients is the number of beds comprising this specialized care unit10. This situation causes a waiting list and the ICU transforms itself into a bottleneck for the care of patients in critical condition. Indeed, several investigations point to the fact that ICUs offering a reduced number of beds contribute to late referral of patients to the ICU, and that individuals await intensive care in hospital wards, emergency department (ED), or operating/recovery rooms. Special attention must be given to cases of sepsis/severe sepsis, which undoubtedly progress to septic shock, and to patients in urgent need of invasive procedures such as Swan-Ganz catheter, mechanical ventilaton and/or renal replacement therapy11. The slow response to treatment due to physiologic deterioration may explain the increased risk of death and mortality due to delayed transfers. With the worsening of clinical conditions, it is expected that patients will present high APACHE II score upon ICU admission, as in the case of the present study.

Young et al.12 have described that 59% of the patients referred to the ICU after over 12 hours presented APACHE II > 20, compared with only 24% in the case of patients admitted to this type of unit in less than 12 hours. Chalfin et al.13 confirmed these results when they analyzed 50,322 requests for ICU admission following initial consultation in the ED. The authors found that the patient group awaiting ICU admission for over 6 hours were hospitalized for longer periods in the ICU (10.7 vs 8.4 days) and hospital mortality was higher (17.4% vs 12.9%). The problem is aggravated by the fact that individuals with increased length of stay in the ICU are more exposed to infections, have less favorable prognosis, and incur higher hospital costs, which together have an evident negative impact on the observed outcome14,15. It is worth highlighting that a tertiary university hospital serves as reference for performance of highly complex procedures, so there is a real need for adjustment of the number of ICU beds. It is crucial that patient transfer from other hospital sectors to the ICU is not delayed.

The results of the present investigation demonstrated the prognostic ability of the APACHE II index and death risk for prediction of the mortality of surgical critically ill patients upon ICU admission. Additionally, these data point to the fact that the delayed transfer of these patients to the ICU has a relationship with mortality observed and may be due to the small number of beds of this special unit of care, in this institution. Furthermore, this study suggests that the hospital organizations must be strongly warned to provide a suitable number of ICU beds on a request basis, when there is indication of ICU transfer. The main goal is not only to increase the chances of survival of patients but also to adjust hospital costs, by reducing ICU length of stay, since the resources for these specialized care are becomig scarce overtime worldwide.

Ronaldo Vicente Martins for his collaboration in data retrievement.

Conflict of interst: none

SciELO Analytics
Dimensions
Altmetric
Scite_
Why the surgical patients are so critical in their intensive care unit arrival?
PlumX