PURPOSE: To evaluate the effect the healing activity of diode laser Indium Gallium Aluminum Phosphorus (InGaAlP) ë660nm on healing of surgical wounds in rats. METHODS: Fifty-four female Wistar rats were used, divided into three groups (n=18) and subdivided into three subgroups (n=6) to be studied in 5, 10 and 15th days after surgical procedures. The wound was induced in the dorsal-cervical using punch. The lesions were irradiated on alternate days with InGaAlP laser, the energy densities of 3J/cm² (L3) or 6J/cm² (L6). The control group received no irradiation. At 5, 10 and 15th days after surgery the animals were euthanized and the repair area was removed and histological sections were stained with hematoxylin-eosin and picrossírius. We evaluated macroscopic and histological lesions in the times cited, as well as morphometric analysis of angiogenesis and collagen content. RESULTS: The wound healing activity InGaAlP laser was evidenced by increased angiogenesis group L3 and L6 in relation to control group (CG) at the 5th day (p=0.0001) and decreased polymorphonuclear infiltrate and hemorrhage (p=0.045 and p=0.07 respectively) in the groups L3 and L6 in relation to control group (GC). On the 10 and 15th days was also observed in groups treated with laser L3 and L6 stimulation was pronounced fibroplasia (p=0.0003 and p=0.034 respectively) when compared with the control group (CG). CONCLUSION: The InGaAlP laser acted positively on the healing of skin wounds in rats. 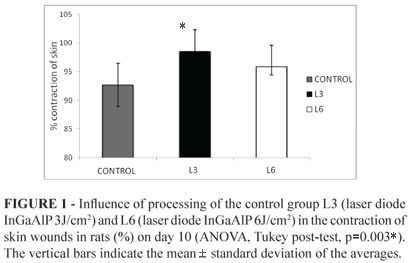