To investigate the deposition of collagen in the colon wall of patients with sigmoid diverticulitis.

Samples of sigmoid tissue from 15 patients (disease group), seven men and eight women aged 37-77 years who underwent surgery for the treatment of diverticulitis, were selected. For the control group, specimens from five patients, three men and two women aged 19-58 years undergoing emergency surgery for sigmoid trauma were selected. These subjects had no associated diseases. The histological study of the surgical specimens was performed by staining with hematoxylin-eosin and picrosirius and using a histochemical method for collagen quantification.

In this study, collagen deposition in the colon wall of the patients operated for sigmoid diverticulitis was higher compared to patients without the disease.

The study protocol was approved by the Ethics Committee of UNIFESP - Escola Paulista de Medicina, Protocol No. 304.795. The study was conducted during the period from 2009 to 2012.

Samples of surgical specimens (sigmoid) from 15 patients operated for diverticular disease and its complications, median age 58.5 (range 37-77) years (disease group), were selected. The control group consisted of three men and two women, median age 44.8 (range 19-58) years, who were operated due to traumatism of the sigmoid.

Patients with ulcerative colitis and Crohn's disease, colon neoplasia, diabetes mellitus, aneurysm of the aorta, chronic hepatitis, and diseases that affect the liver, patients using hepatotoxic drugs and steroids, and HIV-positive patients were excluded, since these conditions can reduce the capacity of collagen synthesis by fibroblasts.

In the disease group, the samples were taken from defined regions macroscopically free of abscesses, fistulas and necrotic tissue along the sigmoid. The sigmoid specimens resected from both groups measured 30 to 50 mm in length by approximately 20 mm in width and included the mucosa, submucosa, muscle and serous layers.

A Sirius red test was performed (EasyPath code EP-11-20011) using a kit purchased from Erviegas Surgical Ltda (Brazil). For the test, initially the slides were deparaffinized through three successive baths lasting five minutes (each batch) in xylene. After dehydration, the slides were submerged in absolute alcohol at 95%, 80% and 50%, and washed for five minutes in running water and then in distilled water, then 10 drops of picrosirius reagent was added and maintained for one hour.

The total collagen content of the colonic wall was measured by the Sirius red test, as shown in Figures 1 and 2. Specimens were considered to be positive for collagen when stained red in the areas and were used for quantitative fiber analysis. Specimens showing other colors (that did not display collagen) were identified and quantified on the slides as muscle tissue (M) and gland epithelium (E). The collagen fibers, muscle tissue and gland tissue were quantified using an image capture system (Qcapture Pro Image Capture and Analysis software, QImaging) which consists of a Qcolor 50 pixels microcamera coupled to an Olympus Bx 53 light microscope with a 40x zoom.

The captured images were transferred to a CellSens version 1.5 program processor (Olympus software platform) in which the highlighted images displaying collagen, muscle tissue and gland tissue were separated on each slide.

All measurements and the sum of all stained areas were determined and a measure was generated for each patient. The morphometric analysis was performed in all areas of each tissue fragment (not in fields).

Data were analyzed statistically by the Wilcoxon test to determine possible differences between independent groups for a given measure, with the level of significance set at 0.05. The analyses were carried out with the aid of the SAS Software (Statistical Analysis System).

Initially, a pilot project was carried out in order to estimate the variability of the main measure, i.e., collagen concentration. The variability thus estimated was used in the design of the sample investigated in the present study.

Figures 1 and 2 below illustrate the Sirius red test in the colonic wall. 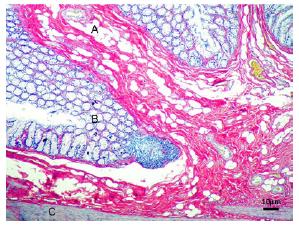 In the samples analyzed, an increase in collagen deposition was present on the colonic wall of the disease group compared to control, whereas no difference was observed between groups in the analysis of the muscle layer (Table 1). 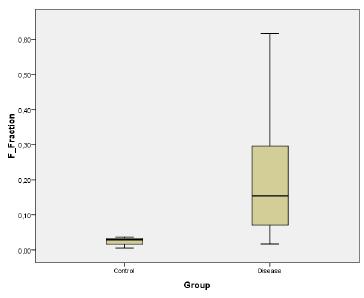 Comparative analysis of the colonic wall (F area) showed a statistically significant difference (p=0.003) between the disease group and the control group.

The extracellular matrix exerts structural and biochemical functions and plays a role in cell metabolism and in the storage and release of growth factors. Collagen is the main protein component of the extracellular matrix1717. Gelsea K, Poschlb E, Aignera T. Collagens - structure, function, and biosynthesis. Adv Drug Deliv Rev. 2003;55:1531-46. PMID: 14623400.. Most references involve a traditional model, in which the main cause of diverticulosis is the association between low dietary fiber intake, small feces volume and increased intraluminal pressure. Specific analysis of diverticulosis shows the presence of acquired changes and chronic evolution. On the other hand, diverticulitis is an acute disease associated with severe complications, which affects individuals of different ages.

The main doubt about the alterations that occur in the colon wall encouraged us to determine whether the concentration of collagen is altered in the colon wall of patients with diverticular disease. The coexistence of colorectal cancer may influence the synthesis of collagen. Malignant tumors often induce a fibroproliferative response in the stroma adjacent to the tumor, which is characterized by an increase in the deposition of type I and type III procollagen. The same authors reported the presence of defective cross-linking of collagens and disorganized arrangement of collagen fibers in ovarian carcinoma1818. Kauppila S, Bode MK, Stenbäck F, Risteli L, Risteli J. Cross-linked telopeptides of type I and III collagens in malignant ovarian tumors in vivo. Br J Cancer. 1999;81:654-61. PMID: 2362884.. In a retrospective study, Krones et al .1919. Krones CJ, Klinge U, Butz N, Junge K, Stumpf M, Rosch R, Hermanns B, Heussen N, Schumpelick V. The rare epidemiologic coincidence of diverticular disease and advanced colonic neoplasia. Int J Colorectal Dis. 2006;21(1):18-24. PMID: 15889263., observed that the simultaneous occurrence of diverticular disease and cancer seems to be less frequent than individual epidemiological estimates of either disease.

Steroids used for the treatment of chronic diseases induce the activation, recruitment and proliferation of defense cells, including neutrophils and macrophages. The prolonged use of corticosteroids exerts a protective effect on the survival of neutrophils and delays apoptosis (death of neutrophils). These cells may be involved in the pathogenesis of severe inflammation in diverticulitis2323. Burkhard HA, Rahden BH, Kircher S, Thiery S, Landmann D, Jurowich CF, Germer CT, Grimm M. Association of steroid use with complicated sigmoid diverticulitis: potential role of activated CD68+/CD163+ macrophages. Langenbecks Arch Surg. 2011;396(6):759-68. PMID: 21553154..

The present study demonstrated an increasing trend in the amount of collagen in diverticulitis. Collagen deposition in the F area was significantly higher in the disease group than in the control group (p=0.003). The submucosal layer, which mainly consists of collagen and elastic fibers, plays an important role in the early healing stage of anastomoses and confers tensile strength and resistance to sutures in the gastrointestinal tract2424. Thornton FJ, Barbul A. Healing in the gastrointestinal tract. Surg Clin North Am. 1997;77(3):546-73. PMID: 9194880.. Analysis of the deposition of collagen in the glandular epithelium (E area) showed significantly higher deposition in the disease group compared to control (p=0.02). Comparison of the M fraction between the disease group and control revealed a significant difference (p=0.02). In the present investigation, the lower fraction represented by the musculature of the disease group compared to the control group could be explained by the higher collagen deposition on the colon wall of the disease group.

According to previous theories, the formation of diverticula is a slow process that can take several years and involves the remodeling of connective tissue. Furthermore, the abnormalities observed in the wall of the sigmoid colon may be related to motility disorders and diet.

Collagen deposition in the colon wall was increased in patients with diverticulitis of the sigmoid colon compared to patients without the disease.