PURPOSE: To evaluate the healing process of a defect in the ventral abdominal wall of rats, comparing the polypropylene and polypropylene/poliglecaprone meshes on the 30th and 60th postoperative day. METHODS: Thirty two Wistar rats were submitted to a ventral abdominal wall defect, with integrity of the parietal peritoneum. In the repair, were used polypropylene (group A) and polypropylene/poliglecaprone (group B) meshes. The groups were subdivided into four subgroups of eight animals euthanized on the 30th (A30 and B30) and 60th postoperative day (A60 and B60). Fragments of the abdominal wall of the animals were submitted to macroscopic, tensiometric and histological evaluations. RESULTS: The tensiometry on subgroup A30 showed a mean average break point of 0.78 MPa and in A60, 0.66 Mpa. In subgroup B30 it was 0.84 MPa and in B60, 1.27 Mpa. The score of the inflammatory process showed subacute phase on A30 and B30 sub-groups and chronic inflammatory process in subgroups A30 and 60B. CONCLUSIONS: The tensile strength was higher on the wall repaired by polypropylene/poliglecaprone mesh in the 60th post-operative day. Histology showed higher concentration of fibrosis on the surface of the polypropylene mesh with a tendency to encapsulation. In polypropylene/poliglecaprone subgroups the histology showed higher concentration of fibrosis on the surface of mesh filaments.

IIPhD, Associate Professor, FEPAR and Federal University of Parana (UFPR) Curitiba-PR, Brazil. Mentor of Master degree Carlos Alberto Lima Utrabo. Responsible for conception of the scientific content with supervision of all phases of the study, manuscript writing and critical revision

PURPOSE: To evaluate the healing process of a defect in the ventral abdominal wall of rats, comparing the polypropylene and polypropylene/poliglecaprone meshes on the 30th and 60th postoperative day.

METHODS: Thirty two Wistar rats were submitted to a ventral abdominal wall defect, with integrity of the parietal peritoneum. In the repair, were used polypropylene (group A) and polypropylene/poliglecaprone (group B) meshes. The groups were subdivided into four subgroups of eight animals euthanized on the 30th (A30 and B30) and 60th postoperative day (A60 and B60). Fragments of the abdominal wall of the animals were submitted to macroscopic, tensiometric and histological evaluations.

Incisional hernia is a complication that can be found among all surgeons when performing abdominal surgery. The prevalence of incisional hernia after laparotomy is 5% to 10%, and when ventral hernias are repaired without the use of meshes, recurrences are above 46%. It is reduced to less than 10% when meshes are used1. The polyester or polypropylene ones when used in closure of abdominal wall defects induce the formation of strong scar tissue, helping hernia correction2.

Mesh utilization for hernia correction was intensified since the 1950s, after the preliminary studies of Usher and Wallace3. The most widely used are of polypropylene. It has been proven to increase strength of the wall, but the high porosity of the polypropylene mesh induces an intense inflammatory reaction with fibrosis, which reduces the elasticity of the wall4.

The high tensile strength and macroporous structure which results with the fibrous scar tissue around the polypropylene fibers, results on the incorporation of the mesh in the abdominal wall as a permanent repair. However, the polypropylene induces the formation of intra-abdominal adhesions.

Several studies have evaluated the use of intraperitoneal mesh5-9. Baroncelli et al.7comparing the healing process between the Parietex® and Surgisis® meshes in the correction of abdominal wall defects in rabbits, observed that the Parietex® and Surgisis® were effective in correcting the defects. Araújo et al.8 assessed the intraperitoneal use of polyester with collagen and polypropylene with polyglycolic acid meshes and had the same repair results in the abdominal wall defects of rabbits. Shulz et al.9, compared absorbable polyester with collagen/elastine/polypropylene meshes to repair injuries to the abdominal wall of rabbits, and had no significant differences on its use.

Therefore, this study was scheduled in order to evaluate the healing process of a defect, produced in the ventral abdominal wall of rats, comparing the repair with polypropylene and polypropylene/poliglecaprone mesh evaluating the abdominal wall within 30 and 60 days postoperatively.

This project is part of the research line of abdominal wall healing process of the Post-Graduate Course in Principles of Surgery, Evangelical Faculty of Parana and was approved by the Ethics Committee of the institution.

Were used 32 Wistar rats (Rattus norvegicus albinus), males, young adults, with three months weighing 280 to 300 grams. The animals were divided into two groups of 16 (A and B). The groups underwent similar surgical procedures and two types of meshes were used: in group A high-density monofilament microporous polypropylene, with estimated weight of 100 g/m2 (Figure 1) and in group B monofilament low density partially absorbable mesh weighting 28 g/m2 with macropores between 3 to 4 mm in size, made by combining equal parts of polypropylene and poliglecaprone (Figure 2).

The rats underwent a preoperative fasting for 12 hours and anesthetized with application of atropine sulfate (0.05 mg/kg) intraperitoneally, and after 10 minutes, applying the mixture of 2% of xylazine hydrochloride (10 mg/kg body weight) and ketamine hydrochloride 10% (25 mg/kg body weight) intraperitoneally. New administration was done, when needed, using half dose after 20 to 30 minutes.

It was produced 1x2 cm defect in the abdominal wall of the animals, preserving the integrity of the parietal peritoneum. The correction of the defect was performed with mesh in an extraperitoneal area of 1.5x2.5 cm fixing angle positions by four separate 5-0 polypropylene thread sutures, half inch from lesion edge, and four other intercalated among them to total fixation on the edges of the lesion (Figures 3 and 4).

The animals were kept under constant light and temperature conditions in standard cages, being fed with commercial diet and free access to water.

Euthanasia was performed on the 30th postoperative day (A30 and B30) and on 60th day after surgery (A60 and B60). Fragment of wall was removed was divided resulting in a cranial and caudal fragment. The segments containing the mesh and musculature (cranial) without the skin, were tensiometric tested. The other segment (caudal) with skin was used for microscopic analysis and kept in 10% formalin solution.

The cranial fragments were placed in saline solution and kept in bottles with ice. For tensiometry, was used the Shimadzu (Japan) model AG-I tensiometer with Trapezium 2 software. Were recorded the data provided by the tests (area and thickness) and the results were analyzed. The tests were performed at a temperature of 24ºC. The equipment was calibrated to a speed of 50 mm/min. The results were expressed in MPa (mega pascal). The fragment was cranially fixed in the tensiometer by the muscle tissue near the suture site.

Staining was performed by Masson trichrome and hematoxylin-eosin methods. The pathologist had no prior knowledge of the animal group. The histological analysis included foreign body granuloma, inflammatory response and fibrosis. For quantitative analysis of inflammatory parameters, neutrophils, edema, congestion, mononuclear cells, granulation tissue and fibrosis were used to quantify the phase of inflammation reaction (acute, sub-acute or chronic)11.

The results were compared by Student t and Mann-Whitney tests with a significance level of 5%.

No animal showed hematoma, infection, fistula, suture dehiscence and incisional hernia. The edges of the wounds were totally healed in all animals. It was found intra-abdominal adhesions in four animals, but with no statistically significant difference between subgroups.

The prostheses were chosen based on present extensive use of polypropylene and considering that there are few studies comparing the meshes of low and high density used in the extraperitoneal space.

The anesthesia used was the combination of intraperitoneal ketamine/xylazine, routinely used in the Post-Graduate Program in Principles of Surgery of the institution. This association provides good anesthesia for up to 30 minutes, enough time for the execution of the lesion and its repair

Klinge et al.13 in a comparative study of high and low weight meshes found seroma in 36% at high weight and 20% in the low weight. In this study, there was no seroma. Greca et al.12 paper with dogs, found 20% incidence of seroma in comparing meshes of low and high weight to correct a defect in the abdominal wall, 5% infection in the prolene high weight mesh, dehiscence in 9.1% and 4.6% respectively, and no mesh incorporation in 5% of the high weight. In this study there was no occurrence of hematoma, suture dehiscence, incisional hernia, wall infection, abscesses, fistulas or seroma in any animal.

This study found rupture always out of suture line, similar to that obtained by Aydos et al.15 and Pundek et al.6. The resistance provided by the mesh, overcomes the one of normal tissue. Comparing the results of the tensiometry, higher breakdown rupture was obtained by the subgroup B60 (p=0.0046)12. Comparing the rupture on subgroup A30 (0.78 MPa) and B30 (0.84 MPa) was noticed no statistic significant difference (p=0.4702), similar to the results of d'Acampora et al.4 comparing the tensiometry on the 28th day after implantation of polypropylene and Vypro®.

Cobb et al.14 drew attention on significant increase in deposition of collagen type I on the mesh with larger pores, low weight. The mesh with wide pores is loosely integrated with the deposition of fatty tissue intercalated with fibrosis. Instead, the mesh with pores smaller than 1 mm, had peri-filamentar granulomas and scar tissue, forming bridges among the pores. Thus, the greater distance between the filaments prevents the formation of these bridges and smaller pores induce a greater fibrosis. Pore size has an important influence on the biocompatibility of the foreign body after implantation.

The results of this study show that despite a fixation of the prosthesis with only four points intercalated with other four is sufficient to prevent the suture dehiscence and rupture of the suture line during tensiometry in both prostheses. It is evident that after 60 days there is a greater wall strength with polypropylene/poliglecaprone, which has pores with a diameter greater than 3 mm, from the polypropylene prosthesis, whose pores are of diameter smaller than 1 mm. This resistance appears more intense even when a comparison is made of tissue resistance of polypropylene/poliglecaprone in 30 and 60 days, confirming the findings published by Greca et al.12, Pascual et al.16. This was already apparent in the Aydos et al.15 paper. Tensiometric evaluation found that the prosthesis have a breaking strength point greater than the normal abdominal wall. Also in 1981, White et al.17 described that the complete incorporation of the mesh is an important requirement to get a solid fixation. The degree of tissue infiltration depends on the pore size of the prosthesis and proportional to the porosity. The infiltration of fibrocytes and collagen with adequate porosity occur in about a month. The healing process requires adequate pore size, in between 75 and 100 µm. The monofilament polypropylene mesh with pores larger than 100 µm produces complete tissue infiltration incorporating the entire prosthesis.

Similar results were found by other authors2,14,16 with good integration of prostheses of high and low weight in tissue repair. High molecular weight promote encapsulation and consequent hardening of the wall; meanwhile, better distribution of fibrosis among the filaments can be found of low weight prosthesis with improvement of elasticity and pliability of the fixed wall.

In relation to macroscopic variables, there was no difference between the repair with both meshes. The rupture strength of the abdominal wall fragment was higher in the wall repaired by polypropylene/poliglecaprone mesh on the 60th postoperative day, but was also demonstrated that the resistance of both meshes are suitable for the defect correction. The histological analysis showed a higher concentration of fibrosis on the surface of the polypropylene mesh with a tendency to encapsulation; among the filaments of polypropylene/poliglecaprone mesh occurred distribution of fibrous tissue with less concentration on the surface. 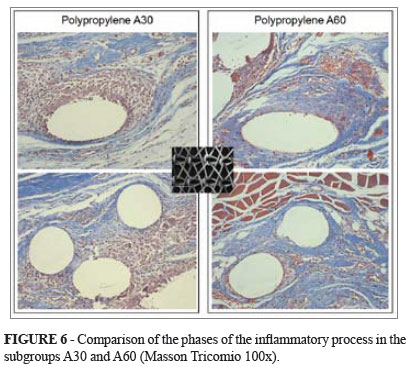