PURPOSE: To investigate the effects of therapeutic ultrasound on the healing of tendon injuries in malnourished rats. METHODS: After the intended nutritional states had been attained, the animals (N=36) were distributed into three groups, named: G1(N=12), control group; G2(N=12), malnourished rats treated with 3 MHz ultrasound at an intensity of 0.5 W/cm²; and G3 (N=12), normal animals treated with 3 MHz at 0.5 W/cm². The injuries were induced by means of an operation to expose the heel tendon and crush it using Allis forceps. RESULTS: The data obtained relating to leukocyte counts, fibroblasts, vessel neoformation, fibrosis and collagen were subjected to statistical treatment using analysis of variance (ANOVA) and Student's t test. Results of p < 0.05 were obtained for fibrosis and collagen. CONCLUSION: The ultrasound was shown to be effective in repairing the tendon, even in malnourished animals whose healing process was retarded. 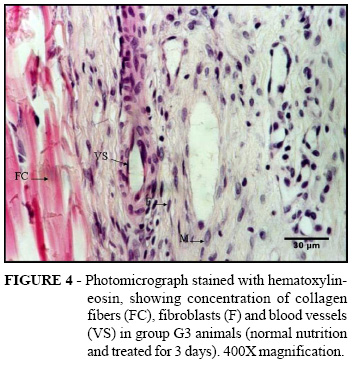