AgNOR in cancer of the stomach

Objective — To study the proliferative activity of AgNORs (argyropholic nucleolar organizer region) in gastric cancer tissue and in the adjacent normal tissue and correlate with the clinical and pathological parameters. Material and Methods — Thirty four formalin-fixed paraffin-embedded tissues sections of patients with adenocarcinoma of the stomach were analysed retrospectively, being 23 of intestinal and 11 of diffuse type of Lauren. The AgNORs can be detected by a specific silver staining and the number de AgNORs was counted in 100 nucleus of tumoral cells and in 100 nucleus of the adjacent normal tissue. Results - The tumoral cells had numerous, smaller, aggregated or one solitary and bigger AgNORs in the nuclei, while the normal cells had one or two AgNORs by nuclei. A significant difference was found between the mean numbers of AgNORs in the nuclei of tumor (3.86) and the normal tissue (1.25). There was also a significant difference between intestinal (4.43) and diffuse type (2.58) means. No significant correlation was found between mean AgNOR count and sex or age of the patients. Conclusions - The quantification of AgNORs can be used as a marker of proliferative activity, helping on the diagnosis of cancer. 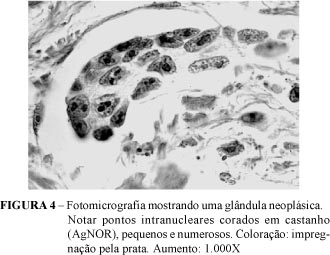