OBJECTIVES: To assess the frequency of electroencephalogram (EEG) requests in the emergency room (ER) and intensive care unit (ICU) for patients with impairment of consciousness (IC) and its impact in the diagnosis and management. METHODS: We followed patients who underwent routine EEG from ER and ICU with IC until discharge or death. RESULTS: During the study, 1679 EEGs were performed, with 149 (8.9%) from ER and ICU. We included 65 patients and 94 EEGs to analyze. Epileptiform activity was present in 42 (44.7%). EEG results changed clinical management in 72.2% of patients. The main reason for EEG requisition was unexplained IC, representing 36.3% of all EEGs analyzed. Eleven (33%) of these had epileptiform activity. CONCLUSION: EEG is underused in the acute setting. The frequency of epileptiform activity was high in patients with unexplained IC. EEG was helpful in confirming or ruling out the suspected initial diagnosis and changing medical management in 72% of patients.

OBJECTIVES: To assess the frequency of electroencephalogram (EEG) requests in the emergency room (ER) and intensive care unit (ICU) for patients with impairment of consciousness (IC) and its impact in the diagnosis and management.

METHODS: We followed patients who underwent routine EEG from ER and ICU with IC until discharge or death.

RESULTS: During the study, 1679 EEGs were performed, with 149 (8.9%) from ER and ICU. We included 65 patients and 94 EEGs to analyze. Epileptiform activity was present in 42 (44.7%). EEG results changed clinical management in 72.2% of patients. The main reason for EEG requisition was unexplained IC, representing 36.3% of all EEGs analyzed. Eleven (33%) of these had epileptiform activity.

CONCLUSION: EEG is underused in the acute setting. The frequency of epileptiform activity was high in patients with unexplained IC. EEG was helpful in confirming or ruling out the suspected initial diagnosis and changing medical management in 72% of patients.

With the advent of neuroimaging techniques, such as high resolution MRI, PET and SPECT, the importance of the electroencephalogram (EEG) in cerebral disease studies had decreased. However, nowadays, it has received high attention as an important source of information, especially in situations such as unexplained impairment of consciousness1-3, since it may offer valuable real time information about brain activity, which can be decisive in some life-threatening situations, as convulsive status epilepticus (CSE) and nonconvulsive status epilepticus (NCSE), in which early recognition and immediately treatment may not only prevent death, but also offer better outcomes1-8. It might also give important clues in the diagnosis of certain conditions, such as encephalitis, hypoxic-anoxic brain injury, metabolic disturbances, intoxication and structural lesions2,3,9-12.

In the present study, we aimed to assess the frequency of emergent EEG (eEEG) requests and its impact for both diagnosis and patients' management in order to investigate the necessity of 24-hours EEG service for both emergency room (ER) and intensive care unit (ICU) in a tertiary hospital.

We included all patients with impairment of consciousness (drowsiness, confusional states or coma) from ER and general ICU for whom an eEEG was requested. Patients were enrolled between May 2008 and June 2009 and followed during hospitalization at UNICAMP university hospital. Exclusion criteria were age under 18 years old, patients in hospital wards and patients with poor quality EEG.

The study was approved by the local ethics committee.

Information was collected through personal interview and/or review of the medical chart. The analyzed variables were age, gender, Glasgow Coma Scale (GSC), presence of focal neurological signs on admission, as well as prior history of seizures, epilepsy and stroke. We also recorded the etiology of the acute neurological condition that prompted admission and patient management after eEEG.

During hospitalization, we followed the clinical course and outcomes until discharge or death.

eEEG was defined as any EEG performed on an emergency basis13, as well as requested for immediate performance or during non business hour7.

Epileptiform activity was defined as spike or sharp waves with asymmetrical transient having a fast rising phase and a slower descending phase followed or not by a slow wave2.

Patients underwent manual opening and closure of the eyes, as well as auditive and painful stimulation.

Each EEG was evaluated by board certified neurophysiologists and later reviewed by both authors (JAGR and FC) in order to standardize criteria (Table 1).

For each patient, we recorded initial diagnostic hypothesis and final diagnosis. We compared these data and identified those individuals whose eEEG findings motivated changes in medical management, such as adjustment of antiepileptic drug dosage (AED) and indication for sequential EEG.

During the study period, a total of 1679 EEGs were performed by our EEG laboratory, including routine, hospital wards, emergency room and ICU. Of these, 149 (8.9%) were performed as emergent EEG and 20 (13.4%) performed by other services (they were not from ER or ICU), which were not included. Ninety four EEGs from the ER and ICU were analyzed (Fig 1). 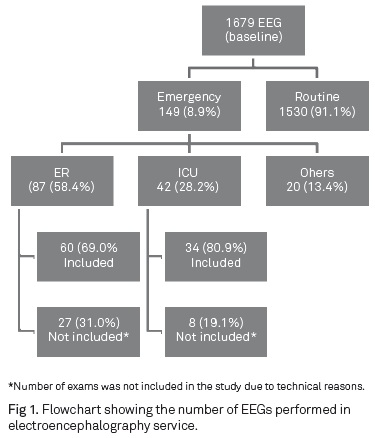 The most common diagnoses in our cohort were cerebrovascular diseases (ischemic and hemorrhagic stroke, aneurism and sinus venus thrombosis) in 17 (26.2%) patients, brain trauma injury (BTI) in 8 (12.3%) and central nervous system (CNS) tumor in 5 (7.7%). Overall, half of the patients presented seizures on admission. Those early seizures were more frequent among patients with cerebrovascular diseases (Table 2).

The main reason underlying indication of the eEEG was not clear in 3 medical requests. Most of the remaining EEGs were requested to investigate impairment of consciousness or status epilepticus (convulsive or non-convulsive). Other reasons for medical request were herpetic encephalitis, myoclonus evaluation and management of AED. Among the 33 EEGs that were indicated due to unexplained impaired of consciousness, 11 (33.3%) had epileptiform activity (Table 3).

Reaction during manual eyes opening and closure was significantly more common in patients who survived (OR 5.3 p<0.05) (Table 4).

Although EEG is not an expensive exam and it changes medical management as shown by several studies, its use is not available in most tertiary hospitals. We analyzed 94 EEGs ordered on emergency basis from patients with impairment of consciousness. Our study showed that a high proportion (44.7%) of EEGs performed in patients with impairment of consciousness had epileptiform activity. The EEG changed management in 72.2% of the patients. By contrast, the proportion of EEGs ordered by ER and ICU was very low (8.9%) relative to the number of exams performed in the EEG laboratory during the study period. The same pattern of underutilization of eEEG was reported in previous studies3,7,16. In developing countries, costs and the small number of specialized professionals (technicians and eletroencephalographers) are key issues13. In the other hand, many physicians do not believe that EEG will help or change the medical intervention, especially when neuroimaging is available. In our series, most EEGs were performed after 24 hours of admission (53.3%), in contrast to a previous Indian study that reported that 84.3% of the EEGs were performed in less than 24 hours13. This difficulty to have EEG on time often bring as consequence inappropriate treatment, in particular when there is a possibility of NCSE.

We found epileptiform abnormalities in almost half of our patients, comparable to another study17, but we think this is an underestimate for at least two reasons. First, most of the patients were taking sedatives, which are known to interfere with EEG recordings. Second, EEGs were performed on an analogical system that precluded the change of montages, sensibility and time scale that improves the chances of finding abnormal patterns18. The significance of epileptiform abnormalities in patients without history of epilepsy is unclear and may occur in up to 6.6% in some studies. However, the risk of seizure occurrence is two folds higher in the presence of interictal epileptiform discharges19.

In the last three decades, EEG had lost importance in the investigation of cerebral diseases, but several studies have shown the utility of EEG in conditions other than epilepsy, including evaluation of prognosis in coma. In our study, the EEG confirmed the diagnosis in 39.6% of the cohort and ruled out in 32.3%, being comparable with earlier studies3,13,16,17.

Although we had a small number of patients with stroke in this series, they had a high frequency of epileptiform activity on EEG (6/8; 75%). Previous studies have shown an association between acute stroke and epilepsy22-25. In a review24, the prevalence of post-ischemic stroke seizures ranged from 2 to 33%, with 50 to 78% of first seizures occurring within 24 hours. Another study6 found a high proportion of nonconvulsive and convulsive seizures in intracerebral hemorrhage (27.8%) compared with ischemic stroke (6%), and over half of traumatic brain injured patients had nonconvulsive seizures detected by continuous EEG monitoring, reinforcing literature data about the necessity of available EEG service at 24 hours for stroke and other ER and ICU patients especially in the acute phase.

The GCS were not different between groups of outcome, confirming that GCS has limited value except for impairment of consciousness related to head trauma26, 27.

The main limitation of our study was the nature of data collection from medical charts to complete our database and the possibility of over or underestimating the data from charts and medical EEG request.

In conclusion, although eEEG is an underutilized diagnostic tool, the frequency of EEGs presenting epileptiform activity was high in patients with unexplained altered level of consciousness. In most cases, EEG proved to be useful, either confirming or ruling out the suspected initial diagnosis. The EEG makes the difference especially when available within 24 hours after admission. Therefore, we believe that ER and ICU physicians should be aware of the usefulness of EEG and request it more often in appropriate circumstances.

We thank the medical staff and EEG technicians from the EEG service at University Hospital of UNICAMP.

There is no conflict of interest to declare.