A systematic review (SR) was carried out according to the appropriate methodology for randomized clinical trials (RCTs). We searched seven databases through a previously defined methodology, and we included RCTs, regardless of language, period of publication and status of publication.

Resulted in 6830 articles retrieved. Of theses, we identified 14 potential eligible studies. but just one RCT was included for the SR. The included RCT compares the eight-plate and the Blount staple and showed no statistically significant difference for the outcomes of time to correct the deformity, postoperative pain after 24 hours and postoperative pain after 72 hours. The study is of low or very low level of evidence to determine the most effective technique. We didn’t find a RCT that compared the correction of the genu varum.

Good quality randomized clinical trials comparing Blount staples versus eight-plaque must be performed to determine which technique is superior for coronal plane corrections. Level of Evidence I, Systematic review of Level RCTs.

The most frequent treatment was osteotomy. In 1933, Phemister was first described the hemiepiphysiodesis surgical procedure: (44. Phemister DB. Operative arrestment of longitudinal growth of bones in the treatment of deformities. J Bone Joint Surg Am. 1933;15(1):1-15. a surgery performed at the physeal level that stops growth in the region, which demands a precise timing calculation, as it is non-reversible. In 1945, Haas5 proposed slowing physeal growth with metal wires that, after being broken, would allow its growth to resume. Encouraged by Haas’ studies, (55. Haas SL. Retardation of bone growth by wire loop. J Bone Joint Surg Am. 1945;27(1):25-36. Blount et al. (66. Blount WP, Clarke GR. Control of bone growth by epiphyseal stapling: a preliminary report. J Bone Joint Surg Am. 1949;31A(3):464-78. and Blount77. Blount WP. A mature look at epiphyseal stapling. Clin Orthop Relat Res. 1971;77:158-63. described using staples for temporary restriction of longitudinal growth in children’s physis, which forwent precise timing calculations before procedure.

Although research show that both procedures effectively temporarily stop limb growth, it does not indicate which would be the preferred method. Some authors state that the eight-plate better compress the bone and the epiphyseal cartilage - which avoids extrusion in small children - and has a lower effect on the longitudinal growth of the bone. Others prefer using staples in patients without much remaining growth, as it speeds. (1212. Goyeneche RA, Primomo CE, Lambert N, Miscione H. Correction of bone angular deformities: Experimental analysis of staples versus 8-plate. J Pediatr Orthop. 2009;29(7):736-40.

This review aims to evaluate the efficacy of guided growth with eight-plates compared with Blount staples to correct idiopathic genu varum or genu valgum. Primary outcomes are improvement in quality of life; pain score using visual analog scale (VAS) or other knee related symptoms; improvement in limb alignment and function; and adverse events.

Retrieved studies were cataloged using EndNote X9.2. Duplicated studies were evaluated using online platform Rayyan QCRI. Two reviewers independently and separately analyzed and reviewed all study titles, abstracts, and keywords. Disagreements were solved through discussion and, whenever necessary, a third reviewer was consulted. We included all randomized controlled trials (RCT) that compared the use of eight-plate with Blount staples to treat idiopathic genu valgum and genu varum in children of both genders, aged 2-18 years old with open physis. For the purpose of this review, we excluded studies using other methods or techniques.

Each of these criteria was explicitly judged by applying low risk of bias, high risk of bias, or unclear risk of bias (lack of precise information or uncertainty over potential bias).

We retrieved and cataloged 6830 papers. Of these, 1956 were duplicates, which left us with 4974 papers. After reading all titles and abstracts, we selected 14 potentially eligible studies, which were retrieved and read. Of these, we included only one RCT. (1616. Gottliebsen M, Rahbek O, Hvid I, Davidsen M, Hellfritzsch MB, Møller-Madsen B. Hemiepiphysiodesis: similar treatment time for tension-band plating and for stapling. Acta Orthop. 2013;84(2):202-6. The flow diagram of this systematic review is depicted by Figure 1, as recommended by PRISMA. (1313. Moher D, Liberati A, Tetzlaff J, Altman DG, PRISMA Group. Preferred reporting items for systematic reviews and meta-analyses: the PRISMA Statement. PLoS Med. 2009;6(7):e1000097.

Outcomes: total time for correction and percentage of patients with other interventions

The study analyzed correction time in days, counting from the surgery date until implants removal. The criterion for other interventions was intermalleolar distance after implant removal. Treatment time did not vary significantly between groups (340 ± 54 days versus 349 days ± 86 days, 95% CI, average difference of 9 days;P 0.78) (Figure 2).

The study did not observe adverse events such as implant failure, infection or physeal injury.

Table 1 describes the risk of bias assessment and Figure 3 the authors’ judgement.

For treatment outcome, we downgraded the level of evidence by one for risk of bias due to absence of blinding, incomplete follow-up and lack of analysis of intention-to-treat. We also downgraded the level of evidence to imprecise because both groups lacked the estimated sample size. 77. Blount WP. A mature look at epiphyseal stapling. Clin Orthop Relat Res. 1971;77:158-63.

For pain outcome, we lowered the level of evidence by two due to absence of blinding, incomplete follow-up, lack of analysis of intention-to-treat and selective reporting, as only 18 out of 20 children were evaluated. Although lacking statistic difference, the authors do not describe how patients were divided into groups. We also downgraded the level of evidence to imprecise because the study was completed using a smaller sample size. We concluded that the evidence is of low quality, meaning that confidence in effect is limited or of very low quality. Therefore, confidence in estimated effects is very limited, with an important level of uncertainty in findings.

We tried to reduce revision bias by comprehensive search for trials and adherence to our protocol (PROSPERO 2018 CRD42018086661). Even with a comprehensible search strategy, with no linguistic limitations, we may have missed some studies after checking the references of relevant papers. We contacted the author of the included study to retrieve unreported data and he provided supplementary information. We also contacted authors of unfinished studies, but received only one answer.

We found no RCT evaluating genu varum correction by eight-plate or Blount staples, which limited this review. We also need to address potential publication bias, which threatens the validity of systematic reviews, especially those that include few and small clinical trials (Figure 3). 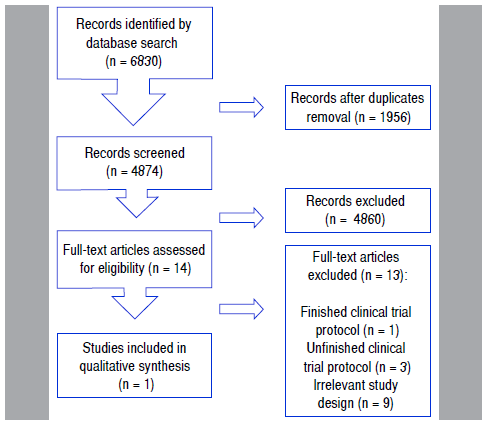