Activated charcoal and graphite for the micropropagation of Cattleya bicolor Lindl. and a orchid double-hybrid 'BLC Pastoral Innocence'

Activated charcoal and graphite for the micropropagation of Cattleya bicolor Lindl. and a orchid double-hybrid 'BLC Pastoral Innocence'

In vitro tissue culture is a powerful alternative tool for germination and initial growth of many orchid species. Knudson 'C' medium (KC medium), described by Knudson (1946), has been the primary medium utilised for in vitro germination of most orchid species (GRIESBACH, 2002). Orchid in vitro propagation or micropropagation is particularly important when dealing with highly valued ornamental plants. These valuable plants are commercially priced and selected for certain phenotypic characteristics, such as their colour, size and shape of flowers, or their potential to allow a species' reintroduction into nature. Species of the genus Cattleya and their hybrids are currently the most commercialised orchids in Brazil due to their large, colourful flowers. Because large numbers of plants have been harvested by orchid collectors and producers, mass propagation of these species will be necessary to replace these orchids in nature.

As in other plant species, orchid in vitro propagation and development may be induced by the inclusion of different supplements (vitamins, amino acids, sugar source and concentration, types and concentrations of growth regulators) in the culture medium and/or by the use of different light and temperature conditions during culture (KRAPIEC et al., 2003; TORRES et al., 2001). Although the addition of growth-regulating substances (auxins and/or cytokinins) is particularly effective and indicated for in vitro orchid propagation (HAMADA et al., 2010; KATSUMI, 2007), the use of these substances is expensive for producers. Producers endeavour to improve micropropagation techniques and reduce costs.

Alternative and inexpensive substances, such as activated charcoal, have been commonly used in tissue culture media to improve growth and development. The beneficial effects of activated charcoal on the in vitro tissue response may result from the darkening of the culture medium for multiple root induction (PASQUAL, 2001) or the adsorption of plant growth regulators and other organic compounds (CHERUVATHUR et al., 2010). The darkening of the culture medium may also be achieved through the addition of graphite. In general, 2.0 g L-1 is the recommended concentration of graphite (ARDITTI et al., 1982). However, no previous study has utilised graphite instead of activated charcoal. Graphite and activated charcoal, known for their carbon structures, are odourless, tasteless and nontoxic substances (JASZCZAK, 1997; MORAES et al., 2005). They may be used to darken the culture medium, to improve root and/or leaf growth and to speed development in in vitro orchid propagation.

The objective of the current study is to analyse different concentrations of activated charcoal and graphite that were separately added to KC medium to stimulate the in vitro propagation of Cattleya bicolor and of a double hybrid orchid ('BLC Pastoral Innocence').

Seeds of Cattleya bicolor Lindl., obtained from a producer in the state of Minas Gerais, Brazil, and seeds of a double hybrid from a cross of Brassavola, Cattleya and Laelia species ('BCL Pastoral Innocence'), obtained from a producer in the region of Mandaguaçu, in the northwestern region of the State of Paraná, Brazil, were germinated in vitro on Kundson-C medium (KNUDSON, 1946) containing 15% coconut water. After eight months, seedlings with two leaves and without roots (10.0 mm height) were placed in culture flasks (250 mL) containing 50 mL KC medium solidified with 0.7% agar and supplemented with 0.0, 1.5, 3.0, 4.5, 6.0, or 7.5 g L-1 activated charcoal or 0.0, 1.5, 3.0, 4.5, 6.0, or 7.5 g L-1 graphite. The pH of the medium was adjusted to 5.3 prior to autoclaving at 121°C for 20 min. The seedlings were inoculated on growth regulator-free KC medium, and the effects of activated charcoal and graphite were tested separately. Each flask contained fifteen seedlings, and the experiments had a completely randomised two-way factorial design with the following two factors: culture medium and illumination. Eleven culture medium conditions (different concentrations of graphite or activated charcoal) and two illumination conditions (14-h photoperiod or continuous illumination) were evaluated. Three replicates of each combination were tested.

The cultures were incubated in a growth chamber at 25 ± 2°C under 14.9 μmol m-2 s1, provided by light radiation with cold-white fluorescent lights (PPF) for a 14-h photoperiod or with continuous illumination (24h).

After six months of culture, the average numbers of induced buds and roots per seedling were recorded for each concentration of activated charcoal and graphite. The resulting differences in treatment conditions were tested by one-way analysis of variance (Anova) and by Tukey-Kramer Multiple Comparison Test (SAS, 1999-2000).

The largest number of buds in Cattleya bicolor seedlings occurred on medium containing 6.0 or 7.5 g L-1 graphite (Tables 1 and 2). The effect of the addition of graphite on the KC medium for in vitro culture of C. bicolor seedlings mimics the effect of auxin (indole-3-butyric acid; IBA) addition to culture medium in in vitro multiplication of Cattleya walkeriana, another species of the same genus (KRAPIEC et al., 2003). In the case of in vitro multiplication of C. walkeriana using seedlings as explants, the greatest frequency of bud induction occurred at concentrations of 1.0 or 1.5 mg L-1 IBA. This effect was observed in both the total absence of cytokinins and in the presence of different cytokinin concentrations.

Our results show that C. bicolor seedlings may be multiplied on KC medium without growth regulators. The addition of more than 2.0 g L-1 graphite (6.0 and 7.5 g L-1) during the culture of C. bicolor seedlings produces an endogenous auxin/cytokinin level that is adequate for the largest bud production on growth regulator-free media (Figure 1). Multiple bud induction is highly important when culturing a valuable plant selected for its colour and the shape of its flowers. Bud clusters may be divided into single buds and transferred to fresh medium for further multiplication. Micropropagation on growth regulator-free media is important for producers because of their focus on improvements in micropropagation techniques and cost reduction.

However, different concentrations of graphite in culture media resulted in no significant differences in root formation in C. bicolor seedlings (Table 1). The largest number of roots occurred on medium containing 6.0 g L-1 activated charcoal (Figure 2). Furthermore, the effect of activated charcoal on multiple root induction was revealed to be significantly different by Tukey's Student Range Test (Tables 1 and 2). 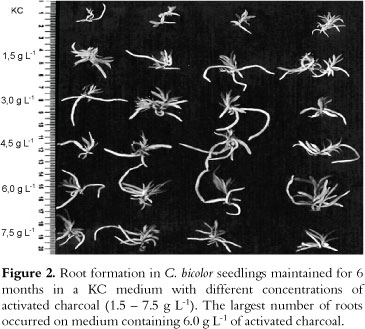 Activated charcoal is pure carbon that has been specially processed to adsorb a wide variety of chemical compounds and gases (SÁENZ et al., 2010). It has been used since ancient times to cure a variety of ailments, including poisoning. According to Sáenz et al. (2010), the use of activated charcoal has been well documented by Egyptians from as early as 1550 B.C. When added to plant medium, activated charcoal adsorbs all toxic compounds released by explants. In addition to the adsorption of toxins, activated charcoal may also determine whether an endogenous auxin/cytokinin level that is adequate for root production in C. bicolor may be reached.

Another beneficial effect of activated charcoal is the induction of a high number of buds and roots in seedlings of the hybrid 'BLC Pastoral Innocence'. The largest numbers of buds and roots were observed in the medium containing 4.5 g L-1 activated charcoal (Table 2). The addition of activated charcoal to the KC culture medium may alter the interaction between endogenous auxin and cytokinin, which controls bud and root formation in seedling explants of the hybrid 'BLC Pastoral Innocence'. The result is an approximately 3-fold increase in the number of buds per seedlings (Table 2). The addition of 4.5 g L-1 activated charcoal to KC medium also led to a 13-fold increase in root length (results not shown).

The level of auxin to cytokinin is important in determining the formation of roots and buds during in vitro tissue culture (TAJI et al., 2002). Whereas roots are formed under conditions of high auxin and low cytokinin levels, buds are formed under conditions of low auxin and high cytokinin. If both are low, no growth or development occurs. The addition of 4.5 g L-1 activated charcoal to in vitro culture medium of the hybrid 'BLC Pastoral Innocence' seedlings may successfully induce the seedling to increase the number of buds and roots. Appropriate levels of auxin to cytokinin override the apical dominance effect and induce bud formation (TRIGIANO; GRAY, 2005); it is also sufficient to induce cell division activity in the root pericycle tissue, which ultimately result in root initiation (GALUSZKA et al., 2008; HOSSAIN et al., 2009, 2010; RESKI, 2006). The adsorptive capacity of activated charcoal has been shown to be related to a decrease in endogenous auxin levels and therefore leads to a larger number of expanded leaves in Catassetum fimbriatum, another species of orchids (MORALES et al., 2006). However, root induction from seedlings of C. fimbriatum showed no significant difference when seedlings were grown on medium with different concentrations of activated charcoal.

In our study, the single beneficial effect of graphite, compared to activated charcoal, was in bud induction in C. bicolor seedlings. However, the results of the current research are important because they indicate that graphite and activated charcoal may be used for bud and root induction, respectively, in C. bicolor seedlings. Furthermore, activated charcoal may be used for bud and root induction in the hybrid 'BLC Pastoral Innocence' in media lacking growth regulators. The continuous multiplication of buds in growth regulator-free media is important because new seedlings should be genetically uniform. In spite of the varied effects of activated charcoal and graphite in our study, the addition of graphite, in place of growth regulators, to KC medium could allow for a new labour-saving operation that minimises cost and operational requirements for orchid producers.

License information: This is an open-access article distributed under the terms of the Creative Commons Attribution License, which permits unrestricted use, distribution, and reproduction in any medium, provided the original work is properly cited.