The purpose of the present study was to evaluate the sexual transmission of GBV-C/HGV, through RNA detection in cervicovaginal smears. Therefore the GBV-C/HGV RNA in cervicovaginal smears from apparently healthy women was investigated using routine proceedings for prophylactic screening to cervical cancer. GBV-C/HGV RNA was detected by reverse transcriptase and polymerase chain reaction (RT-PCR). Only one woman presented co-infection with human papilloma virus (HPV). The GBV-C/HGV RNA was detected in 13/73 (17.57%) healthy women and it's prevalence in participating women between 28-43 years old was 53.85%. No association was found with GBV-C/HGV for the age of first sexual intercourse and number of pregnancies. In GBV-C/HGV RNA positive women, 69.23% were married. In conclusion, the present findings show that cervical and vaginal specimens could contain the GBV-C/HGV RNA.

The purpose of the present study was to evaluate the sexual transmission of GBV-C/HGV, through RNA detection in cervicovaginal smears. Therefore the GBV-C/HGV RNA in cervicovaginal smears from apparently healthy women was investigated using routine proceedings for prophylactic screening to cervical cancer. GBV-C/HGV RNA was detected by reverse transcriptase and polymerase chain reaction (RT-PCR). Only one woman presented co-infection with human papilloma virus (HPV). The GBV-C/HGV RNA was detected in 13/73 (17.57%) healthy women and it's prevalence in participating women between 28-43 years old was 53.85%. No association was found with GBV-C/HGV for the age of first sexual intercourse and number of pregnancies. In GBV-C/HGV RNA positive women, 69.23% were married. In conclusion, the present findings show that cervical and vaginal specimens could contain the GBV-C/HGV RNA.

The GBV-C/HGV is an enveloped positive-stranded RNA virus with a genome of about 9.4 kb belonging to the Flaviviridae family. Characterization of HGV and GBV-C showed them to be members of the family Flaviviridae (Simons et al., 1995; Linnen et al., 1996) and to contain a positive-polarity, single-strand RNA genome predicted to encode a polyprotein of approximately 3,000 amino acids. A sequence comparison demonstrated that HGV and GBV-C are different isolates of the same virus. Because subsequent studies did not find any association between these viruses and hepatitis, most researchers do not use the term HGV but refer to the virus as GBV-C (Stapleton, 2003). There are evidences that liver is not the primary site of GBV-C/HGV replication (Fabris et al., 1998). Persistent infection by GBV-C is common in humans and genetically divergent isolates have been identified in different parts of the world (Pavesi, 2001).

The HCV and GBV-C/HGV are two related members of the Flaviviridae, but they seem to behave differently from a pathogenicity standpoint. The absence of an immunogenic capsid protein in GBV-C/HGV may allow immune surveillance to be eluded and possibly, in this way, it is not subjected to immune selection, so that the sequence of infecting isolate persists for long periods (Pilot-Matias et al., 1996). Using a yeast genetic system, it has been observed that IFN-resistant GBV-C NS5A inhibited RNA-activated protein kinase (PKR) - mediated eIF2alpha phosphorilation suggesting a mechanism by which GBV-C may evade clearance by naturally occurring host antiviral responses (Xiang et al., 2005).

The GBV-C/HGV is transmitted mainly by parenteral route. Patients with chronic renal failure have a high risk of acquiring these viruses because they need frequent blood transfusions and undergo medical procedures that accompany bleeding (Castelain et al., 2004). In Brazil, there are data concerning GBV-C/HGV infection in hemodialysis patients (Watanabe et al., 2003; Ramos Filho, 2004). The GBV-C/HGV infection prevalence was found low in patients with HBV and HCV infections, supporting that although parenteral route is the most effective way, other routes such as sexual intercourse and intra-familial contact could also play an important role in the HGV transmission (Kaya et al., 2004).

The presence of GBV-C/HGV has no effect on the course of infection with hepatitis C virus (HCV) (Alter et al., 1997) or hepatitis B virus (HBV) (Wu et al., 1997), in coinfected individuals. Some evidences suggest that HIV-infected patients coinfected with GBV-C/HGV may experience a slower progression of HIV disease (Lefrère et al., 1999) and it has been found that HIV-positive people who are coinfected with GBV-C survive significantly longer than HIV-positive individuals without GBV-C infection (Stapleton et al., 2003; Stapleton et al., 2004). Expression of mRNA for RANTES, MIP-1α. MIP-1β , SDF-1 and secretion of the chemokines into culture supernatants were higher in GBV-C infected cells (Xiang et al., 2004). Recent evidence indicates that GBV-C E2 protein may neutralize HIV infection in vitro (George and Varmaz, 2005).

Actually, the HGV infection is found widely in human population. Until now many efforts have been made on the expression and replication of HGV in vitro, but many researchers have focused on the association of HGV with liver diseases. Recently it has been found that genomic RNA from full-length HGV cDNA is infectious to the Macaca mulatta and can cause mild hepatitis. M. mulatta is susceptible to the inoculated HGV, and therefore can be used as an experimental animal model for the studies of HGV infection and pathogenesis (Ren et al., 2005).

Epidemiological data suggest that this virus is also spread by sexual transmission (Bourlet et al., 1999). Because GBV-C is transmitted sexually, vertically, and by exposure to contaminated blood, populations with high rates of sexually transmitted diseases or blood-borne infections have high prevalence rates of active or prior GBV-C infection (Stapleton, 2003). This study enrolled 73 women ranged in age from 14 to 68 years, in order to examine the GBV-C/HGV RNA presence in the cervicovaginal smears samples.

Following approval from the Human Ethics Committee of Londrina State University, cervicovaginal smears were collected from 73 Brazilian women. The samples were examined for the presence of GBV-C/HGV RNA. The specimens were collected from apparently healthy women under Pap smears routine proceedings for prophylactic screening of cervical cancer. The tests were performed without knowledge of colpo-cytology and clinical data.

The GBV-C primers were used for the amplification of GBV-C RNA. The GBV-C primers were designed based on the sequence of GBV-C/HGV (GenBank sequence U44402) and were targeted to amplify the conserved 5' end (5' UTR) of the GBV-C/HGV genome (outer sense 5' GGTAGGTCGTAAATCCCGGT 3'; outer antisense 5' CCCACTGGTCCTTGTCAACT 3'; inner sense 5' TGGTAGCCACTATAGGTGG 3'; inner antisense 5' GCCTATTGGTCAAGAG 3'). Reactions conditions for the two PCR rounds were the same (20 mM Tris-HCl pH 8.4, 50 mM KCl, 1.5 mM MgCl2, 200 µM dNTP and 1.25 units of Taq polymerase) and consisted of an initial denaturation step of 94ºC for 5 min followed by 40 cycles of 94ºC for 1 min, 45ºC for 1 min, 72ºC for 1 min and a final extension of 72ºC for 10min using thermocycler (PCRSprint ThermoHybaid). PCR products of 217 base pairs were analyzed by electrophoresis on acrylamide gel (10%) for 1,5h at 80V. After gel electrophoresis, the band intensity for 217 bp was detected by a nonradioisotopic technique using a commercially available silver staining method (Oto et al., 1993). A negative control (water instead of cDNA) was included in all reactions. Specificity of the amplification products was demonstrated by DNA sequencing. To confirm the presence of GBV-C RNA, RT-nested PCR was repeated for all the positive samples, and in some cases RNA from patients' blood was obtained for the second time and also tested.

Data were analyzed by Student's test by Microcal OriginTM 4.1 Program with the level of significance set at p<0.05. 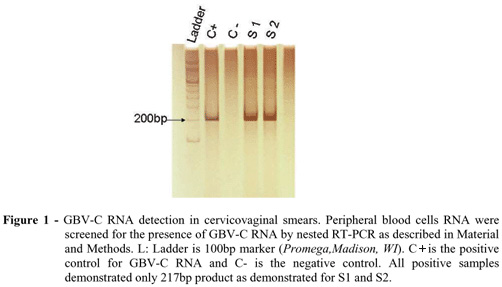 In this work, GBV-C/HGV RNA was detected in 13 of the 73 donors (17.57%). The oligos utilized to amplify GBV-C/HGV sequences are customly used in other studies in our laboratory, where PCR products had been directly sequenced. Sequence analysis revealed that the amplicons were compatible to GenBank accession U44402.

Recently, it has been suggested that male to male sex is a more effective mode of transmission of GBV-C (Berzsenyi et al., 2005). A significant trend of GBV-C/HGV RNA positivity in relation to age was observed, with the highest prevalence in donors between 29-39 years old men (Oliveira et al., 2002). As shown in Table 1, the similar values of age mean was observed in the presence or absence of GBV-C/HGV RNA but, in this work, in spite of only women, there was association between GBV-C/HGV RNA and age in which GBV-C/HGV RNA prevalence was detected in participating women between 28-43 years old (53.85%).

No association was found with GBV-C/HGV for the age of first intercourse and number of pregnancies. In the GBV-C/HGV RNA positive women, 69.23% were married (Table 2). These results support the findings of others studies regarding the role of sexual transmission of GBV-C/HGV (Sarrazin et al., 1997; Frey et al., 2002).

Potential transmission routes associated with parenteral (30%), sexual (18%), both (6%) and intra-familiar (6%) by GBV-C/HGV RNA positive donors have been demonstrated. However, 40% of them did not mention any known source for infection (Oliveira et al., 2002).

In the present study, the group of cervicovaginal group donors positive for GBV-C/HGV RNA, earned less than U$ 150 per month (data not shown). This fact is compatible with Konomi et al. (1999), who related that low socioeconomic status and poor hygienic conditions occurring in developing countries could contribute to GBV-C/HGV dissemination. It has been proposed by Frey et al. (2002) that sexual activity and, possibly, the presence of sexually transmitted diseases (STD) increases the risk of GBV-C/HGV transmission. The presence of GBV-C/HGV RNA in the semen supernatant samples (33.3%) and saliva samples (6.6%) has been shown, but not in faeces and urine samples (Quiros-Roldan et al., 2001). These authors, therefore, hypothesize that semen or salivary contact could be involved in GBV-C/HGV transmission.

In a comparison between subjects with or without STD, Frey et al. (2002) have demonstrated that the prevalence of GBV-C/HGV was 36.6% versus 8.8%, respectively, when results of PCR and enzyme-linked immunosorbent assay were combined, suggesting that the presence of a STD increases the risk of GBV-C/HGV. An extensive and diverse spectrum of pathogenic organisms may be observed in vaginal microbiota (Wanderlei-Silva et al., 2005). In spite of the wide ranging literature on the microbiology of normal and abnormal vaginal contents, many questions have still not been completely answered. Although studies by Souza et al. (2006) demonstrated that accurate detection of GBV-C RNA by nested PCR requires the use of primers representing multiple genome regions, the present findings showed that cervicovaginal specimens could contain GBV-C/HGV RNA. Whether this reflects active replication of such viruses in the female genital tract, for example by lymphoid cells or exudation from plasma remains to be established.

We acknowledge the volunteers who made the study possible. This work was supported by CNPq, CAPES and PROPPG-UEL.