The aim of the present study was to verify the association between seropositivity for IgG anti-Toxoplasma gondii antibodies and social, economic and environmental variables of pregnant women attending the public health centers of Paraná, Brazil. From January 2007 to July 2010, 2226 pregnant women were interviewed and detection of anti-T. gondii specific IgG and IgM antibodies was performed by chemiluminescence test. Seropositivity for anti-T. gondii IgG was observed in 1151 (51.7%) pregnant women, 29 of which (1.3%) presented IgM reagent with IgG of high avidity. The variables associated with the presence of IgG were residency in the rural area, more than one pregnancy, less than or equal to eight years schooling, low per capita income, age group, raw or poorly cooked meat ingestion, and contact with the soil. There was neither association with raw fruit and vegetable ingestion nor with the presence of cats in the residencies.

The aim of the present study was to verify the association between seropositivity for IgG anti-Toxoplasma gondii antibodies and social, economic and environmental variables of pregnant women attending the public health centers of Paraná, Brazil. From January 2007 to July 2010, 2226 pregnant women were interviewed and detection of anti-T. gondii specific IgG and IgM antibodies was performed by chemiluminescence test. Seropositivity for anti-T. gondii IgG was observed in 1151 (51.7%) pregnant women, 29 of which (1.3%) presented IgM reagent with IgG of high avidity. The variables associated with the presence of IgG were residency in the rural area, more than one pregnancy, less than or equal to eight years schooling, low per capita income, age group, raw or poorly cooked meat ingestion, and contact with the soil. There was neither association with raw fruit and vegetable ingestion nor with the presence of cats in the residencies.

Congenital toxoplasmosis occurs when tachyzoites from Toxoplasma gondii reaches the fetus via the placenta.1 Toxoplasmosis prevalence varies with region, due to climatic and, especially, cultural differences in the population. Serological investigations of IgG antibodies in pregnant women from several regions of the world have shown a variation ranging from 9.1 (Kent, United Kingdom) to 90.0% (Panamá).2,3 In Brazil, this level of variation occurs among the different states and populations investigated. The prevalence in pregnant women in Caxias do Sul, in Rio Grande do Sul, was 31.0%, and in the state of Mato Grosso do Sul it was 91.6%.4,5 Still in Brazil, the estimated maternal seroconversion rate ranges from 0.6% to 8.6%6,7 and congenital toxoplasmosis incidence from 0.3 per 1000 to 8 per 1000 live births.8,9

Health promotion strategies should be based on knowledge of the risk factors for infection that differ from region to region. Cook et al.10 demonstrated that between 3% and 63% of the infections were attributed to ingestion of poorly cooked or cured meat and from 6.0% to 17.0% from contact with the soil, but they found no association with contact with cats or their feces. In China an association between serum prevalence and raw or poorly cooked meat ingestion, unwashed vegetable and fruit ingestion, contact with cats, residency in the rural zone and low educational level has been reported.11 On the other hand, a study carried out in the Democratic Republic of São Tomé and Principe found no association between seropositivity and the ingestion of raw meat, contact with animals, ingestion of poorly washed vegetables or consumption of unboiled water.12

The objective of the present study was to determine the prevalence of anti-T. gondii IgG and IgM antibodies and the social and epidemiological factors associated with the infection in pregnant women.

The study protocol was approved by the Ethics in Research Committee of Londrina State University under number 182/07. The purpose and procedures of the study were explained to all participants, and a written informed consent was obtained from all of them.

Pregnant women were included in the research if they received antenatal care in public health care facilities, in five municipalities of the State of Paraná, Brazil (Londrina, Rolandia, Cambe, Cascavel and Palotina) after their free and informed consent. In these municipalities a toxoplasmosis health surveillance programme was implemented based on prenatal screening with serological monitoring of seronegative pregnant women quarterly.15

The ideal sample size for each city was determined using the expected prevalence of 50%, standard error of 5% and a significance level of 5%. In Londrina, the ideal number of pregnant women was estimated to be 357, in Rolândia 254, in Cambé 278, in Cascavel 341, and in Palotina 196. In all cities, the number of pregnant women who participated in the research was higher than the calculated sample size.

To detect the variables associated with infection by T. gondii, each pregnant woman responded to a questionnaire collecting information about their pregnancy, eating and hygiene habits, as well as social and economic variables. The information was analyzed by the EpiInfo 3.5.1 software.16 Chi Square test and odds ratio were computed to assess the association between T. gondii infection and the variables researched. The 5% level of significance was used.

Data analysis of the social and demographic variables associated with the serological results of anti-T. gondii IgG antibodies are shown in Tables 2 and 3, respectively.

Table 2 shows that the seropositivity for anti-T. gondii IgG antibodies were associated with residency in the rural area, low per capita income, age group, low educational level and more than one pregnancy. The variables related to eating habits and behavior presented significant association only with contact with the soil. There was no association with water consumption from the public system, raw or poorly cooked meat ingestion, raw fruit and vegetable ingestion and the presence of cats in the residencies (Table 3).

The prevalence of anti-T. gondii IgG antibodies observed in the present study (51.7%) was within the limits of seropositivity reported in pregnant women in Brazil ranging from 31% to 91.6%, depending on the region and populations studied.4,5,17,18 Prevalence studies carried out in different parts of the world have also shown great variation that can be explained by environmental and cultural factors of the population.19

Another relevant aspect detected in the present study was that almost half the pregnant women attending the public health centers in the State of Paraná (48.3%), Brazil, were susceptible to primo-infection by T. gondii and they were at risk for fetal transmission. This result underscores the importance of prenatal screening to identify the pregnant women's risk to acquire primo-infection during pregnancy with subsequent transmission to the fetus.

The occurrence of simultaneous positivity of IgG and IgM antibodies in 29 pregnant women (1.3%) was similar to that reported in the Midwestern region of Brazil,17 but lower rate was found in Caxias do Sul, Rio Grande do Sul, Brazil (5.5%).4 IgG and IgM positivity in pregnant women with high avidity IgG antibodies in the first quarter of pregnancy is indicative of infection prior to pregnancy and therefore with no risk of fetal infection.20 However, when detected in the second quarter, as it was the case in one pregnant woman, high avidity IgG after the 16th week of pregnancy cannot rule out infection at the beginning of pregnancy.21

The pregnant woman with negative IgG and positive IgM had a second serology 15 days later and maintained the same result. Thus she was considered a false-positive or nonspecific IgM and this pregnant woman was considered susceptible to primo-infection by T. gondii. This fact demonstrated the importance of confirming the results. IgM results should be interpreted carefully to prevent the exposure of the mother and fetus to unnecessary procedures such as treatment and amniocentesis, which are often harmful to both. False positive diagnosis also causes anxiety in the mother and family and reduces the positive expectations regarding the new child.22

The fact that women with low per capita income and low educational level presented greater chance of being infected by T. gondii underscores the importance of investments in education as a means of promoting health in the population. Similar results were reported in pregnant women from Goiania and Londrina, Brazil.6,18

Another variable associated with infection by T. gondii was the number of pregnancies. Having more than one pregnancy was associated with greater prevalence. This result was similar to that observed by other authors.26 In a cohort study carried out on women at fertile age, it was observed that pregnant women had 2.2 times greater chance of acquiring the infection,27 showing that pregnancy itself may be a risk factor for the infection, probably because of the immune depression that occurs during pregnancy.28,29 However, maternal age can be a confusing factor because increase in pregnancies is associated with increase in age which is explained by the increased exposure to the source of infection during life.27

The variable habit of manipulating earth and sand also showed statistical significance with toxoplasmosis in this study (p < 0.001) and this finding is similar to that reported by Spalding et al.13 in pregnant women from Rio Grande do Sul, Brazil.

An important risk factor for infection is ingestion of raw or badly cooked fresh or cured meat,10,11 but in the present study this was not associated with toxoplasmosis. This finding may be justified by the reduction in the prevalence of toxoplasmosis in pigs in the northern region of Paraná, where the municipality of Londrina is located.30 The reduction in this rate probably occurred because more technology and sanitary improvements have been adopted by swine farmers in recent years.

Similarly, the presence of cats in the residence was not associated with infection by T. gondii, the same result was reported by others authors.10,12 The association between cats and human toxoplasmosis is difficult to be ascertained by epidemiological surveys. The oocysts do not adhere to cat fur as do helminth eggs, and furthermore cats remove the oocysts from their fur before they become infectant.31

Regarding other factors studied such as raw fruit and/or vegetable ingestion, type of water consumed, presence of dogs, and presence of a vegetable garden in the residency were not significant either. However, the various studies carried out in Brazil and in the world have shown variation in these results, which can be explained by the climactic, cultural and hygiene differences of the various populations and also by the difference in methodologies employed in the studies, making it difficult to compare the results.11,12,27,28

Due to the low incidence of acute toxoplasmosis during pregnancy and the high cost of cohort studies, most of the studies that aim to determine toxoplasmosis risk factors are on prevalence and not on incidence. Reactivity for IgG is used as a marker of infection by T. gondii.As anti-T. gondii IgG antibodies persist for many years, many infections may have been acquired years before and the environment and behavior patterns may have changed and the risk factors associated with infection may no longer be present. This is a limitation of the present study, but the knowledge of the risk factors in each region is important to define toxoplasmosis control programmes, especially in pregnancy. Thus in the impossibility of carrying out longitudinal studies, the studies based on prevalence have become important tools for epidemiological characterization of the infection.

In conclusion, in the population studied, 48.3% of the pregnant women were anti-T. gondii IgG and IgM antibody negative, showing the importance of implementing specific primary prevention programmes to guide pregnant women on the ways they can prevent the infection. Serum monitoring throughout pregnancy, so as to detect cases of maternal seroconversion allowing for early maternal treatment is also crucial. Such intervention could decrease the rate of fetal transmission or even reduce the sequelae in cases where congenital transmission has already occurred.

All authors declare to have no conflict of interest

To the Municipal Health Office of Londrina (Basic Health Units and CENTROLAB) and to the University Hospital from Universidade Estadual de Londrina. 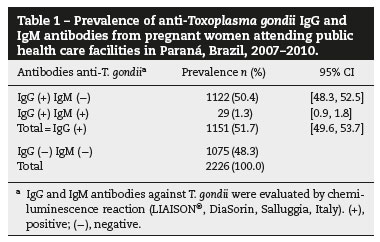