Human cytomegalovirus is a major cause of morbidity in kidney transplant patients.

We aimed to study viral replication and serological response in the first months post kidney transplant in patients undergoing universal prophylaxis or preemptive therapy and correlate the findings with the clinical course of Human cytomegalovirus infection.

Independent from the clinical strategy adopted for managing Human cytomegalovirus infection, prophylaxis versus preemptive therapy, the pp65 antigenemia assay and serological response were assessed on the day of transplantation, and then weekly during the first three months of post-transplant.

From the 32 transplant recipients, 16 were positive for pp65 antigenemia, with a similar incidence rate in each group. There were no positive results in the first three weeks of monitoring; the positivity rate peaked at week eight. There was a trend for a higher and earlier frequency of positivity in the universal prophylaxis group in which the course of the Human cytomegalovirus infection was also more severe. Despite the differences in clinical picture and in the initial immunosuppressant schedule, the serological response was similar in both groups.

Routine monitoring during the first three post-transplant months has a positive impact on the early detection of Human cytomegalovirus viral replication allowing for timely treatment in order to reduce morbidity of the disease. The strategy of universal therapy employing intravenous ganciclovir was associated to a worse clinical course of the Human cytomegalovirus infection suggesting that the use of >10 cells/2 × 105 leukocytes as a cut-off in this setting may be inappropriate.

Blood samples of patients undergoing kidney transplantation at the Nephrology Division of a University Hospital were analyzed, from April 2014 (a time when pp65 assay was implemented in our center) to September 2015. This was an observational, prospective, longitudinal study, which analyzed the HCMV replication profile by pp65 antigenemia assay, with internal validation by qPCR assay. In addition, serum levels of anti-HCMV immunoglobulins were quantified. Clinical findings and other laboratory test results were obtained from patients' charts. The research protocol was approved by the Research Ethics Committee of the Medical School (CAAE: 18768213.1.0000.5243).

Irrespective of the clinical strategy adopted, the monitoring consisted in detection of viral replication in neutrophils infected by HCMV on the day of transplantation and weekly during the first three months. An additional evaluation was conducted at the end of the sixth month post-transplantation. Patients were grouped according to the type of the strategy adopted (preemptive therapy vs. prophylactic therapy).

The pp65 assay was performed by indirect immunofluorescence using Brite™ Turbo kit (IQ Products, Groningen, Netherlands) following the manufacturer's instructions. Results were expressed as the number of positive cells per 2 × 105 leukocytes. Sample processing and analysis were performed in a blinded fashion by the laboratory staff and the reports were made available on the electronic chart system of the hospital.

Quantification of anti-CMV IgM and IgG was performed using the commercial kits Architect CMV IgG Reagent and Architect CMV IgM Reagent, respectively (Abbott, Ireland), using a HCMV lysate (strain AD169) in a chemiluminescent microparticles immunoassay. The serum levels of anti-HCMV immunoglobulins (IgM and IgG) was measured on the day of transplantation and weekly during the first three months. An additional evaluation was conducted at the end of the sixth month post-transplantation.

The type of strategy (preemptive or universal) was chosen at the discretion of the medical assistants. In case of preemptive therapy, intravenous ganciclovir was initiated when at least 10 positive cells by 2 × 105 leukocytes (cut-off) were identified in the pp65 assay. In prophylactic therapy, antiviral treatment with ganciclovir was administered soon after transplantation, and maintained for three consecutive months, according to the following criteria: donor CMV IgG positive with CMV IgG negative receptor; donor > 60 years; serum creatinine of deceased donor >1.5 mg/dL; or whenever the induction therapy was based on thymoglobulin.

Thirty-two successful kidney transplants were performed during the study period. Baseline characteristics of donors are shown in Table 1. Their mean age was 44 ± 14 years. Intracranial bleeding (41%) was the main cause of death, and all were seropositive for HCMV. The mean cold ischemia time was 18.5 ± 8.5 hours and there were no significant differences when comparing the characteristics of donors whose organs were allocated to recipients undergoing universal prophylaxis or preemptive therapy.

Out of 32 recipients (44% male, 50% white), 18 received universal prophylaxis and 14 preemptive therapy. Baseline characteristics of recipients are shown in Table 2. Again, no statistically significant differences were found when comparing baseline parameters between groups.

The pp65 antigenemia assay was performed weekly, for six months post-transplant. Sixteen patients were found to be positive for pp65 antigenemia, with a similar incidence between groups (Table 3). The time-line occurrence in weeks of positive cases is depicted in Fig. 1. There were no positive results in the first three weeks of monitoring and the frequency of positivity peaked on week eight. Six month post-transplant only one patient relapsed after three negative evaluations. When comparing the positivity rate along the weeks between the study groups (Fig. 2), there was a trend for a higher and earlier frequency of positivity among those on universal prophylaxis than in those on preemptive therapy. In addition, the positivity tended to last longer in the universal prophylaxis group (4.11 ± 1.83 weeks vs. 2.71 ± 0.95 weeks, p = 0.090).

Thumbnail
Table 3
Frequency of positive and negative cases for pp65 antigenemia in preemptive therapy and universal prophylaxis after kidney transplantation. 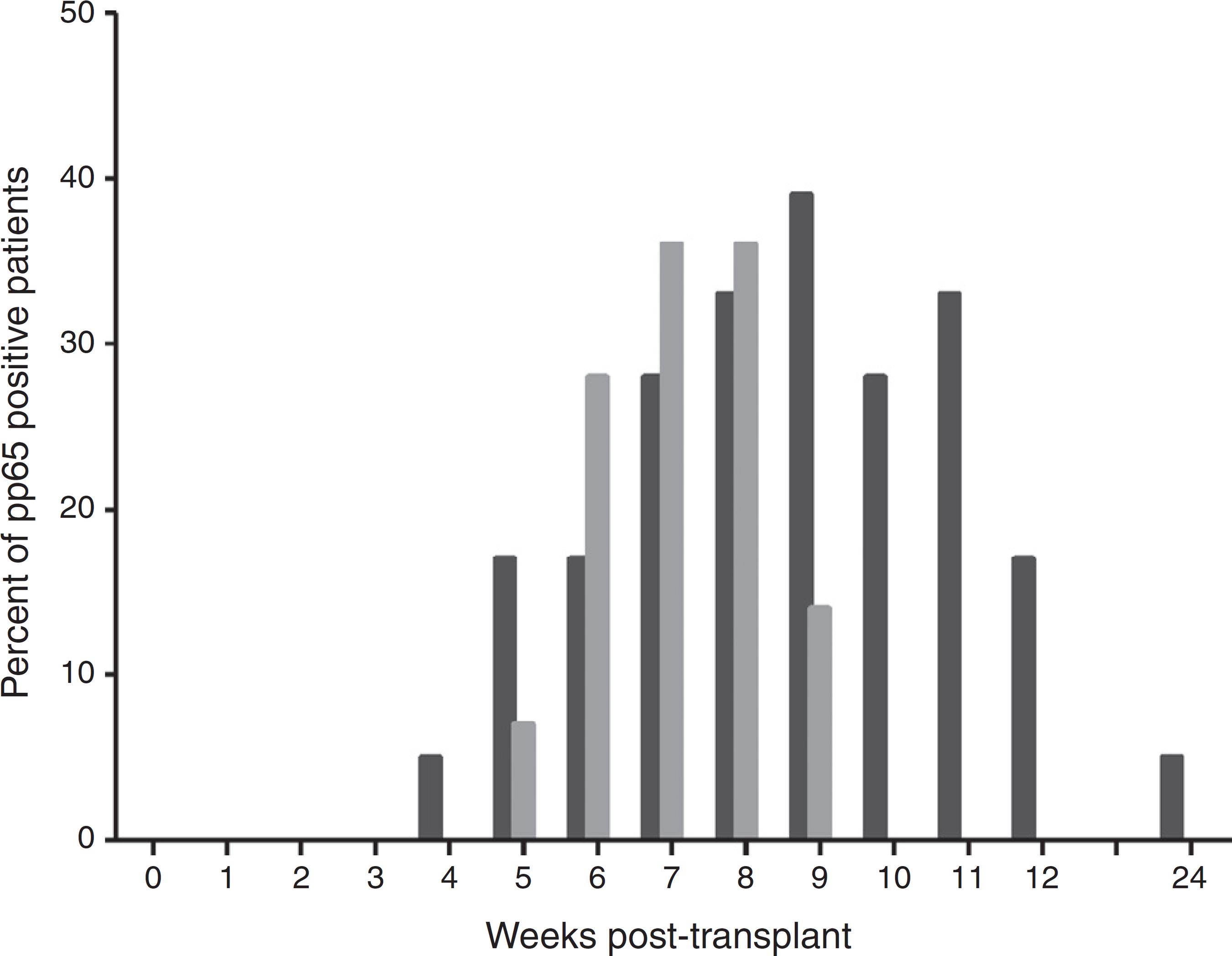 From the nine positive patients on universal prophylaxis (mean age of 46.2 ± 9.2 years), three were male. All of them had gastrointestinal manifestations, and in three the virus was also identified by immunohistochemistry in kidney biopsies. One patient was considered clinically resistant to ganciclovir by clinicians and managed with immunoglobulin. Hemophagocytic lymphohistiocytosis was diagnosed in one case. Two of positive cases had a severe form of the disease with a fatal course. From the seven positive patients on preemptive therapy (mean age 51.4 ± 10.5 years), five were male. Here, every positive patient remained asymptomatic.

The mean number of cells of the positive patients and the serological response to HCMV infection are shown in Fig. 3. A significant difference in the number of positive cells/2 × 105 leukocytes between groups in favor of universal prophylaxis was found (123 ± 423 vs. 23 ± 87, p < 0.01). No difference was observed between groups regarding serum levels of either IgG or IgM anti-HCMV.

Fig. 3
Comparison between viral replication profile of HCMV by pp65 antigenemia assay (dashed line) and IgM and IgG levels (gray and black columns, respectively) during the study period in kidney transplant patients on universal prophylaxis (Panel A) or preemptive therapy (Panel B).

The first positive patient for pp65 antigenemia in our study was detected at week 4, in line with previous reports.1616 Schroeder R, Michelon T, Fagundes I, et al. Cytomegalovirus disease latent and active infection rates during the first trimester after kidney transplantation. Transplant Proc. 2004;36:896-8.,2626 Wirgart BZ, Claesson K, Eriksson B-M, et al. Cytomegalovirus (CMV) DNA amplification from plasma compared with CMV pp65 antigen (ppUL83) detection in leukocytes for early diagnosis of symptomatic CMV infection in kidney transplant patients. Clin Diagn Virol. 1996;7:99-110. The peak of affected patients occurred at week 8. In some way surprising, the first positive patient was on universal prophylaxis. Indeed, the positivity rate was higher in the first weeks as well as in the last weeks of the study in the group on universal prophylaxis compared to those on preemptive therapy. It should be pointed out that HCMV infection was more severe in those on universal prophylaxis resulting in two fatalities. In the preemptive therapy group, none of the patient had symptoms. Accordingly, the number of infected cells and the duration of positivity were both higher in the universal prophylaxis group. Interestingly, despite the differences in clinical picture and in the initial immunosuppressant schedule, the serological response, as evaluated by the serum levels of specific IgG and IgM, was similar in both groups.

Reports using intravenous ganciclovir as universal prophylaxis are scarce in the literature since oral administration of drugs is the preferred route in this setting. However, consistent with our findings, a study with intravenous ganciclovir as universal therapy in lung transplantation reported a rate of 68% of HCMV infection in the first year post-transplant.3030 Schröeder R, Michelon T, Wurdig J, et al. The incidence of cytomegalovirus infection in lung transplant recipients under universal prophylaxis with intravenous ganciclovir. Braz J Infect Dis. 2007;11:212-4. Perhaps not accidently, the study was also carried out in our country, in which oral drugs for HCMV prophylaxis are not made available by the public health system. Considering the mentioned specificity of the present study, our findings cannot be used to argue the concept that universal prophylaxis with oral drugs reduces and delays HCMV infection.1818 Couzi L, Helou S, Bachelet T, et al. Preemptive therapy versus valgancyclovir prophylaxis in cytomegalovirus-positive kidney transplant recipients receiving antithymocyte globulin induction. Transplant Proc. 2012;44:2809-13.,2121 Kliem V, Fricke L, Wollbrink T, et al. Improvement in long-term renal graft survival due to CMV prophylaxis with oral ganciclovir: results of a randomized clinical trial. Am J Transplant. 2008;8:975-83.,3131 Limaye AP, Bakthavatsalam R, Kim HW, et al. Impact of cytomegalovirus in organ transplant recipients in the era of antiviral prophylaxis. Transplantation. 2006;81:1645-52. It does suggest though that when implemented using intravenous ganciclovir, universal prophylaxis does not seem to be warranted in light of our findings.

In conclusion, the present study reiterate that routine monitoring during the first three post-transplant months has a positive impact on early detection of HCMV replication allowing timely treatment to reduce the morbidity of the disease. The strategy of universal therapy employing intravenous ganciclovir was associated to a more severe clinical course of HCMV infection allowing us to think that the use of >10 cells/2 × 105 leukocytes as a cutoff in this setting may be inappropriate. Further studies, with larger sample sizes, may be needed to confirm our results.

The authors thanks of Andrezza Cucinelli and Fabiana de Araujo Pinto, for the laboratorial support.

Fig. 3   Comparison between viral replication profile of HCMV by pp65 antigenemia assay (dashed line) and IgM and IgG levels (gray and black columns, respectively) during the study period in kidney transplant patients on universal prophylaxis (Panel A) or preemptive therapy (Panel B).

Table 2   Baseline characteristics of recipients, according to the strategy adopted for managing HCMV post kidney transplantation.

Table 3   Frequency of positive and negative cases for pp65 antigenemia in preemptive therapy and universal prophylaxis after kidney transplantation.