Fish are susceptible to several bacterial infections, mainly when reared in high densities conditions. Diseases outbreaks are responsible for elevated mortality rates and decrease of the productivity efficiency, causing high economic losses to the fish farmers (6,10). The use of antibiotics is the main treatment applied to control bacterial illness in fish farms. Due to the use of a wide variety of antibiotics, aquaculture has been implicated as potential environment to the development and selection of resistant bacteria and a source of these pathogens to other animals and humans (10,19). The adoption of same antibiotics in different fields (veterinary and human medicine) improves the emergence and occurrence of the resistance phenomenon. Some bacterial fish pathogens are also associated to diseases in humans, making the aquaculture products a potential risk to the customers (zoonotic or foodborne diseases) (24). Streptococcus agalactiae is a dangerous pathogen to freshwater and marine fish. The infection is characterized by brain invasion, nervous signs and septicemia (13,18). These bacteria can infect humans, causing mainly pneumonia and meningitis in newborns (17). Aeromonas hydrophila is responsible for cases of skin infections, septicemia and gastroenteritis in fish and human (25). Flavobacterium columnare is pathogenic only to freshwater fish species and shows low environmental fitness, when compared with other aquatic bacteria. Even though, this agent is highly virulent to young fish (fry and fingerling), causing skin lesions and high mortality, generally associated with poor environmental conditions (7,8). Regarding the problem of microbial resistance, there is an urgent need to establish the rules to the rational use of antibiotics and the discovery of new drugs and alternative therapies to control bacterial diseases. Owing the ability to synthesize many different substances, the plants are one of the top richest sources of new drugs (1,5). Extracts of Brazilian methanolic plants have a high potential as an alternative source of antibacterial compounds (15,16,20,23). Therefore, the aim of this study was to investigate the in vitro antibacterial activity of Brazilian plants extracts against three fish pathogenic bacteria.

During period 2002-2004, forty six native plants (Table 1) of southeast region of Brazil (San Francisco Valley and Lavras city) were sampled and identified by comparison with available specimens in the Herbarium of the Federal University of Lavras (UFLA). The fresh material were washed with distillated water, dried at 40ºC for 48h and triturated into small particles. To the extraction, 300g of particulate material was suspended in 600 ml of methanol during 48 hours. Therefore, the suspension was filtered and the extraction procedure was repeated twice to vegetable residues. The solvent was vacuum evaporated at 45ºC. The plant extracts were lyophilized and stored at -20ºC until use.

Agar diffusion assay was performed according to the guidelines "Susceptibility testing of bacteria isolated from aquatic animals" of the Clinical and Laboratory Standards Institute (4). The strains were maintained at -70ºC. To the tests the strains were thawed and recovered by streaking onto agar plates. A. hydrophila and S. agalactiae were incubated at 30ºC for 24 hours in Müeller-Hinton (MH) Agar (Difco, USA). MH Agar was supplemented with 10% of equine blood to the cultivation of S. agalactiae. F. columnare was growth onto Medium of Hsu-Shotts (MHS) (0.3% collagen, 0.2% tryptone, 0.05% yeast extract, 0.03% calcium chloride) plates (2) for 48 hours at 26ºC. A. hydrophila and S. agalactiae suspensions were prepared in sterile 0.85% saline solution, adjusted to a turbidity of 0.5 McFarland scale, equivalent to 108 CFU.mL-1 (4). MHS broth was used to prepare the F. columnare suspension. The concentration of the suspension was standardized using spectrophotometer SP 11-05 (Spectrum, China) to an absorbance of 0.230, corresponding to 108 CFU.mL-1.

The suspensions were streaked onto agar plates using sterile cotton swabs. Seven wells each with 6 mm of diameter were made in agar and 40 µL of the different extracts, diluted in ethanol: water (7:3) solutions (10 mg.mL-1) were applied in the wells. Plates with S. agalactiae and A. hydrophila were incubated for 24 hours at 30ºC and plate with F. columnare for 48 hour at 26ºC. The inhibition zone was measured with a millimeter ruler. The assay was made in duplicate and the extracts solvent was used as control.

The extracts with antibacterial activity in agar diffusion assay were selected to determination of the minimum inhibition concentration (MIC) against the same strains. MH Broth (Difco, USA) supplemented with the divalent cations Ca2+ and Mg2+ (CAMHB) was used for strains AE 255-03 and SA 16-06 incubated at 30ºC for 24 hours. Additionally, for the cultivation of SA 16-06 CAMHB was supplemented with 2.5% of lysed horse blood (3). MHS broth was used for strain BZ 01-02 incubated at 26ºC for48 hours.

After incubation, aqueous solution of 2, 3, 5-Triphenyltetrazolium chloride (Merck, Germany), 2 mg.mL-1, was added 25 µL to each well to check the bacterial growth, indicated by the pink colour formation. Florfenicol and dimethyl sulfoxide (solvent) were used as controls.

The results of the antimicrobial screening by agar diffusion are showed in Table 1. Thirty one methanolic extracts presented antibacterial activity for at least one strain tested. F. columnare was the most susceptible organism, being inhibited by 31 extracts. S. agalactiae and A. hydrophila were inhibited by five and four plant extracts, respectively.

A variety of plant species are capable of synthesizing many substances with antibacterial activity. These properties have been described to extracts of many plants found in Brazilian flora (1,16,20). However, to the plants analyzed in this work, there aren't previous studies evaluating this characteristic, except to Schinus terebinthifolia Raddi and Xylosma sp. (9,12). The extract of Schinus terebinthifolia Raddi presented antimicrobial activity against fluorquinolone-resistant and macrolide-resistant Staphylococcus aureus strains. Chemical analysis showed the presence of phenols, pentacyclic, triterpenes and anthraquinonas in the extract of Schinus terebinthifolia Raddi (12). Species of Xylosma also showed the capacity of inhibit the growth of Staphylococcus aureus and Candida albicans, presenting MIC values of 2.5 mg.mL-1 and 1.2 mg.mL-1 respectively (14). Antioxidant effect, cytotoxicity and antimicrobial activity of diterpene esters and phenolic glycosides isolated from plants of the family Flacourtiaceae have been identified. However, there are no data describing the chemical composition of the other plants tested here. No one of the extracts analyzed here showed antibacterial activity against A. hydrophila and S. agalactiae, simultaneously. The occurrence of antibiotic resistant strains of bacteria has been described in aquaculture systems (6,11). Probably, the same mechanism involved in the antibiotic resistance should inhibit the deleterious action of the extracts on the bacterial cells. Even though, some extracts were effective against the pathogens, being a potential alternative to the therapy of fish diseases.

F. columnare was the microorganism most susceptible to major of tested extracts. In contrast to its high virulence to young fish, this bacterium is sensible to the main disinfectants used in fish farms, such potassium permanganate, hydrogen peroxide, chloramines and salt (21,22). Despite of their common use, these compounds may be dangerous to fry and aquatic environment. The plant extracts can be applied as an alternative to prevent and control outbreaks of columnaris, mainly in hatchery. Since these substances are natural, their hazardous potential is lower when compared with other products. The results show that analyzed plants presented a high potential as alternative therapy of bacterial fish diseases currently observed in Brazilian fish farming.

This work was supported by FAPEMIG (Grant CRA 1750/05) and the student fellowship by CAPES. 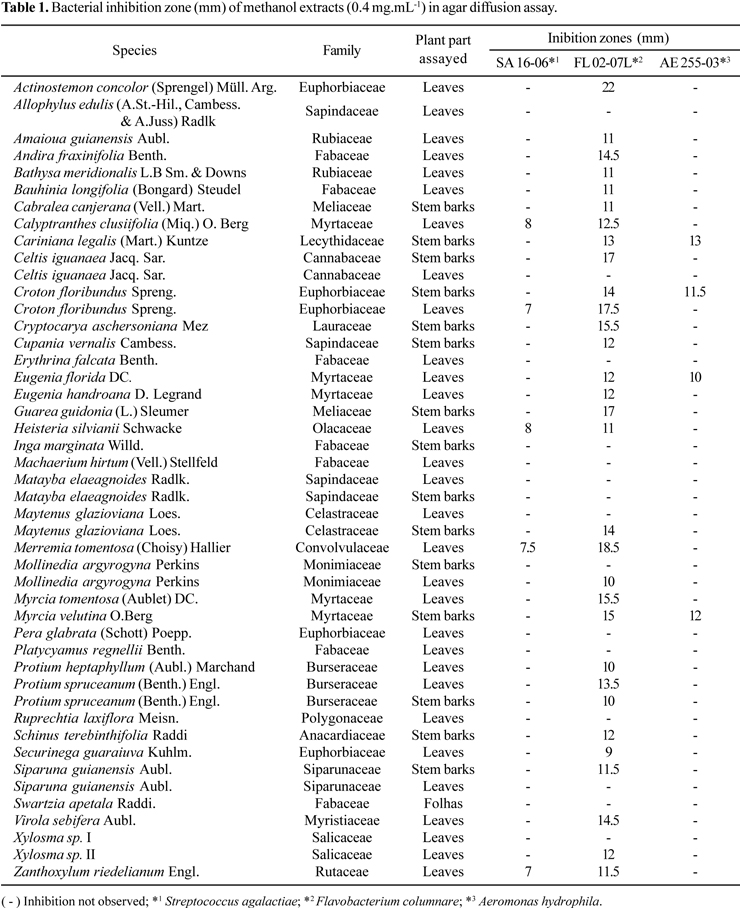