Department of Microbiology and Molecular Genetics, University of the Punjab Lahore, Pakistan

Discovery of antibiotics revolutionized the world of medicine. Increased rate of morbidity and mortality due to epidemics came into control. As a result, average life span increased for human beings. With the passage of time, non judicious use of antibiotics became common practice resulting in the reemerging infections. For solution, the derivatives of antibiotics were discovered and applied but pathogenic bacteria developed the resistance against them also. Now it was the need of time to search for new strategies for infection control of resistant pathogenic bacteria (10). Lactobacillus group of bacteria is famous for its uses as probiotic and food preservative. It has won this prestige due to its production of inhibitory compounds such as organic acids, hydrogen peroxides, diacetyl and bacteriocins. Bacteriocins are the ribosomally produced cationic proteins inhibiting other bacteria living in the same ecological niche. So, lactobacilli use it as weapon for its survival (2, 15).

Bacteriocins have withdrawn special interest of microbiologists for the control of pathogenic bacteria (9). However, reports on the effects of Lactobacilli bacteriocins on antibiotic resistant pathogenic Escherichia coli have not yet appeared in the medical press. Pathogenic Escherichia coli is very common bacteria which causes infections like diarrhea and other extraintestinal infections (2).

Screening of bacteriocin producer and its characterization

Bacteriocin producing bacteria were screened as previously described (12). The culture of bacteriocin producers was identified according to their morphological, and biochemical properties. The used tests were: Gram reaction; growth at 15, 25 and 45°C; production of catalase, cytochrome oxidase; acid and gas production from glucose; acid production from carbohydrates (1% w/v) lactose, sucrose, mannitol, ribose, sorbitol and mannose in MRS broth devoid of glucose and beef extract with phenol red as indicator.

Bacterial strains showing most significant inhibitory zone against cephalosporin bacterial strain were selected for determination of optimum growth conditions. For determination of optimum temperature, 5 sets each of 3 test tubes were used for this study. In each tube 5ml of MRS medium was inoculated with 50µl of log phase growing bacterial cells and incubated at 15, 25, 35, 45 and 55°C for overnight. The bacterial growth was assessed by measuring absorbance at 600nm.

For preparation of growth curves, 10 test tubes for each bacteriocin producing strain were prepared with MRS broth medium and inoculated with 50µl of log phase bacterial culture. The tubes were incubated in shaking incubator at 37°C and 150rpm. After every two hours the tubes were taken out and optical density (O.D) was noted at 600nm. Growth curves were prepared by plotting graph between time of incubation and O.D.

Effects of pH and temperature on bacteriocin Bacteriocins were characterized by noting the effects of heat and pH. Effects of heat were monitored by incubating the cell free supernatant containing bacteriocin at 50, 75 and 100°C in incubator for five minutes. Agar well diffusion test was performed to detect residual activity (8). Resistant culture supernatant was incubated at 100°C for 15, 30 and 60 min (9). pH effects on bacteriocin activity was analyzed by using HCl and NaOH for maintaining the pH of 3.0, 5.0, 7.0, 9.0 and 11.0. Agar well diffusion test was performed following Alpay and coworkers (1).

Cephalosporin resistant bacterial strain was isolated from pus culture of a 45 years old female. Gram staining, colonial morphology on Macconkeys, and positive results for indol, EMB agar, TSI and other biochemical test confirmed that the resistant strain is E .coli (3). Out of 72 gram +ve, catalase and oxidase -ve, bacilli isolates, only two strains i-e strain 45 and strain 52 were found to produce effective bacteriocin against cephalosporin resistant E. coli. Strain 45 was isolated from fecal material of chick and strain 52 was isolated from fecal material of cat. Biochemical characterization showed that strain 45 belonged to Lactobacillus fermentum and strain 52 belonged to Lactobacillus acidophilus. There was prominent difference between the sizes of zones of inhibitions produced by L. fermentum and L. acidophilus. The zone of inhibition due to bacteriocin produced by L. fermentum was larger as compared to that of L .acidophilus (Figure 1). The growth of L. fermentum was maximum at 25°C and pH value equal to 5.5 (Figure 2 and 3). For L. acidophilus, optimum temperature for growth was 35°C and pH was 6.0 (Figure 2 and 3). Figure 4 indicates the growth curves of both strains. Bacteriocins of both strains were found stable on all temperature and pH ranges under observation (Table 1). 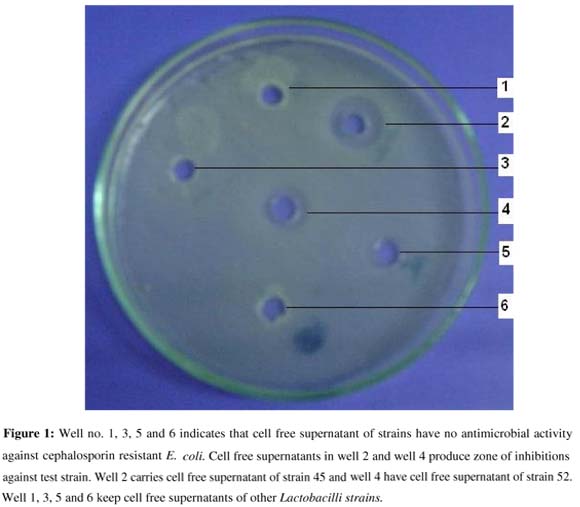