This study aimed to evaluate the tolerance to salinity and temperature, the genetic diversity and the symbiotic efficiency of rhizobia isolates obtained from wild genotypes of common bean cultivated in soil samples from the States of Goiás, Minas Gerais and Paraná. The isolates were subjected to different NaCl concentrations (0%, 1%, 2%, 4% and 6%) at different temperatures (28 °C, 33 °C, 38 °C, 43 °C and 48 °C). Genotypic characterization was performed based on BOX-PCR, REP-PCR markers and 16S rRNA sequencing. An evaluation of symbiotic efficiency was carried out under greenhouse conditions in autoclaved Leonard jars. Among 98 isolates about 45% of them and Rhizobium freirei PRF81 showed a high tolerance to temperature, while 24 isolates and Rhizobium tropici CIAT899 were able to use all of the carbon sources studied. Clustering analysis based on the ability to use carbon sources and on the tolerance to salinity and temperature grouped 49 isolates, R. tropici CIAT899 and R. tropici H12 with a similarity level of 76%. Based on genotypic characterization, 65% of the isolates showed an approximately 66% similarity with R. tropici CIAT899 and R. tropici H12. About 20% of the isolates showed symbiotic efficiency similar to or better than the best Rhizobium reference strain (R. tropici CIAT899). Phylogenetic analysis of the 16S rRNA revealed that two efficient isolates (ALSG5A1 and JPrG6A8) belong to the group of strains used as commercial inoculant for common bean in Brazil and must be assayed in field experiments.

Despite its abundance in the atmosphere, N is scarce in tropical soils due to the fast mineralization of organic matter in tropical conditions. Although the decomposition of organic matter is an important source of N for crops, the adequate supply of N to crops depends largely on the use of nitrogen fertilizers.44 Soares BL [D.Sc. Thesis] Avaliação técnica econômica do feijoeiro-comum inoculado com rizóbio em diferentes ambientes. Lavras, Brasil: Universidade Federal de Lavras; 2012, 150 pp. However, biological nitrogen fixation (BNF) is considered a more sustainable approach for supplying N to the production system.

To improve BNF efficiency, more efficient rhizobia strains are needed. Many isolating works have been performed using soil from different sites; however, as trap plant usually is used a commercial variety of common bean. The strategy used in our work was to collect soil in different sites and to use wild genotypes of common bean as trap plant looking for a better exploration of the rhizobial community, since wild genotypes show a broader genetic base. This work aimed to characterize and determine the symbiotic efficiency of rhizobia isolates obtained from the root nodules of wild genotypes of common bean.

CSU was assayed for 98 isolates and for the R. tropici reference strains. Bacteria were kept for growth on modified YMA (Yeast Mannitol Agar) culture medium, without mannitol, added with individual carbon sources sucrose, glucose, malic acid, maleic acid, nicotinic acid, inositol, sorbitol, arabinose, fructose and glycerol. After incubation at 28 °C, bacterial growth was verified from 48 to 96 h at each 24 h.

Genotypic characterization based on molecular markers

Based on genotypic characterization, 30 isolates were selected to evaluate their symbiotic efficiency. In addition to the isolates, the treatments were composed of two R. tropici strains (CIAT899 and H12), one R. freirei strain (PRF81), two nitrogen fertilized treatments (NT1 = 60 and NT2 = 120 kg ha-1 of N) and one control treatment (CT - without inoculation and without N).

CSU, TST and genotypic characterization data were transformed into a binary matrix. The binary matrices were used for the construction of a similarity matrix using the Jaccard coefficient. The UPGMA (Unweighted pair-group method) was applied to transform the similarity matrix into a similarity dendrogram using NTSYSpc® software.1717 Rolf J. NTSYS-PC: Numerical Taxonomy and Multivariate Analysis System, Version 1.4. New York: Exeter; 1988.

CSU evaluation revealed the distribution of 98 isolates among 28 groups, while for TST the isolates were distributed into 27 groups. Among the reference strains, R. tropici CIAT899 grew in all carbon sources, showing the same reference of CSU observed to the 24 isolates (Table S1). Regarding TST, R. freirei PRF81 showed greater tolerance among the reference strains; however, 18 isolates were able to grow under more stringent conditions as compared to R. freirei PRF81 (Table S2).

Similarity analysis based on the CSU and TST data resulted in similarities among isolates varying from 60% to 100%, and five physiological groups (PG) were formed considering a similarity level of 75% (Fig. 1). PG1 comprises the reference strain R. freirei PRF81 and three isolates, representing 3% of the total isolates. The reference strains R. tropici CIAT899 and R. tropici H12 clustered with 49 isolates on PG4, representing 48.5% of the evaluated isolates. Moreover, 38, 7 and 1 isolates formed PG2, PG3 and PG5 clusters, respectively (Fig. 1).

Fig. 1
Consensus dendrogram obtained by combining CSU and TST data of 98 isolates from wild genotypes of common bean. The dendrogram was generated using the UPGMA algorithm, and the similarity matrix was determined using the Jaccard coefficient.

Genotypic characterization based on BOX and REP-PCR markers

Based on the results of physiological clustering (Fig. 1), 55 isolates were selected for genotypic characterization with the REP- and BOX-PCR markers. Using this approach, isolates were distributed among 11 different genotype groups (GG) when considering a 65% similarity (Fig. 2).

Fig. 2
Consensus dendrogram obtained by combining the REP and BOX-PCR data of 55 isolates from wild genotypes of common bean. The dendrogram was generated using the UPGMA algorithm, and the similarity matrix was determined using the Jaccard coefficient.

To evaluate symbiotic efficiency in greenhouse conditions, 30 isolates were used based on genotype clustering (Fig. 2). The inoculation significantly affected all of the evaluated parameters (Table 1).

The NN showed significant difference among the isolates. The Significant greater values varied from 133 to 174 nodules plant-1 and, it were found for the isolates ALSG5A4, JPrG6A8, NVSG11A3, UnPaG11A9 and UnPaG8A12. Among the reference strains, the best results were observed for R. tropici CIAT899 and R. tropici H12, with 110 and 96 nodules plant-1, respectively. Those same isolates also showed high NDM values; however, there was no significant difference between the reference strains R. tropici CIAT899 and R. tropici H12. Moreover, 17 isolates showed greater NDM than the R. freirei PRF81 (Table 1). 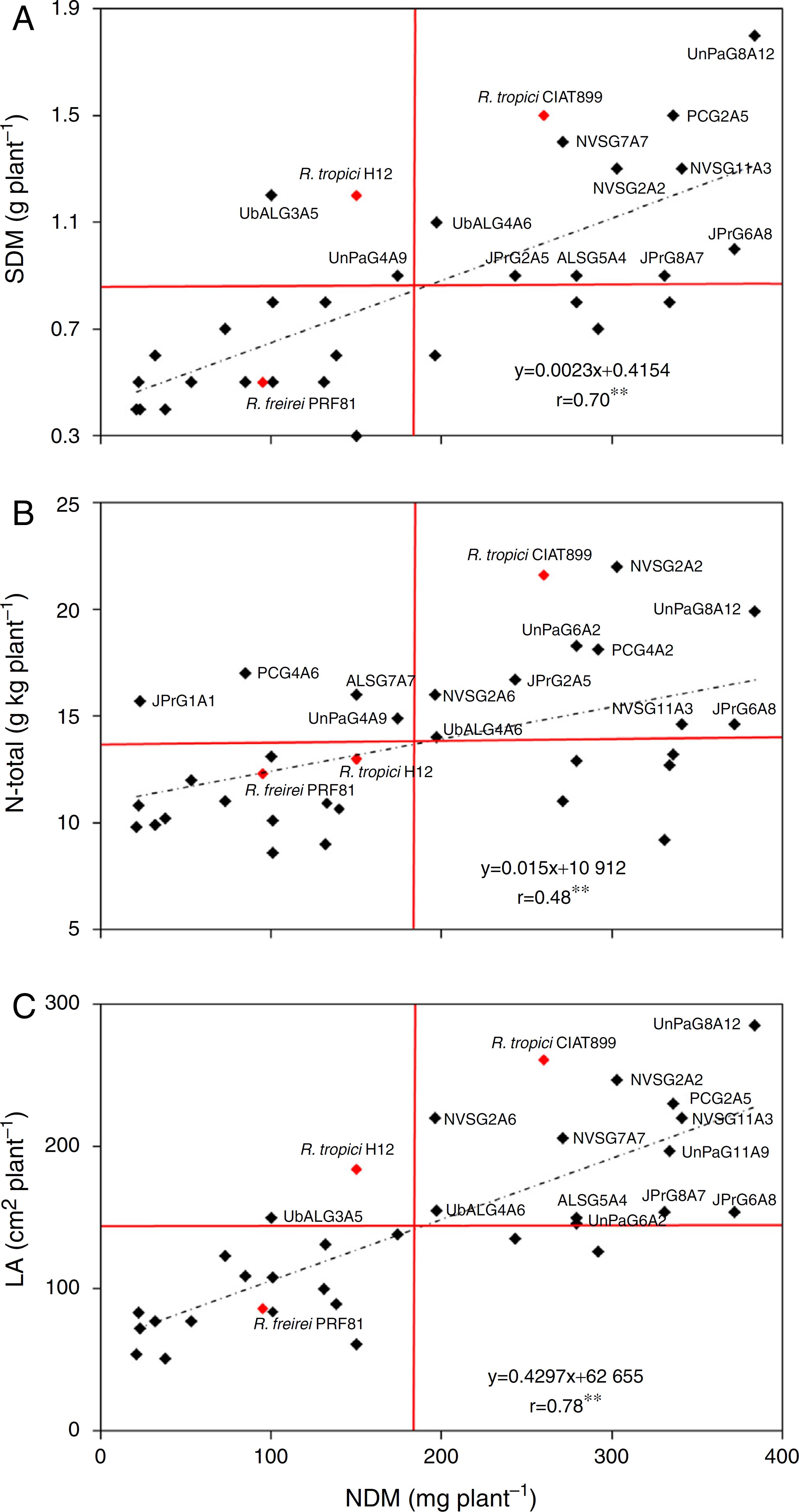 Correlation analyses between NDM × SDM, NDM × N-Total and NDM × LA showed highly significant results, with correlation coefficients (r) of 0.7, 0.48 and 0.78, respectively. This analysis showed that for the three correlations performed, the isolates UnPaG8A12, NVSG11A3, NVSG2A2, JPrG6A8 and UbALG4A6 and, the reference strain R. tropici CIAT899, were above the general mean (Fig. 3). Remarkably the isolates UbALG3A5 and UnPaG4A9 (Fig. 3A), JPrG1A1, PCG4A6, ALSG7A7 and UnPaG4A9 (Fig. 3B) and UbALG3A5 (Fig. 3C) also showed high values of SDW, N-Total and LA, respectively, even with low values NDM.

The clustering analysis based on CSU and TST showed that the Rhizobium reference strains clustered with 52 isolates, forming the groups PG1 and PG4. Isolates grouped in these two PGs accounted for more than 50% of the isolates evaluated (Fig. 1).

The reference strain R. freirei PRF81 and the isolates NVSG7A7, ALSG10A8 and NVSG8A2 were grouped in the PG1 cluster and showed a high TST. However, these bacteria showed weak CSU (Table S2). High TST may be associated with a specific genetic control, conferring such ability to these bacteria. Gomes et al.2626 Gomes DF, Batista JSS, Schiavon AL, Andrade DS, Hungria M. Proteomic profiling of Rhizobium tropici PRF 81: identification of conserved and specific responses to heat stress. BMC Microbiol. 2012;12:1-12. showed that the PRF 81 (SEMIA 4080) strain is capable of differentially expressing some conserved heat-responsive proteins, such as DnaK and GroEL. They also reported the up-regulation of proteins involved in a variety of metabolic pathways, including translation factors and oxidative stress-responsive proteins, indicating that the responses of R. freirei strain PRF 81 to heat stress go beyond the induction of heat shock proteins.

Reference strains R. tropici CIAT899 and R. tropici H12 formed PG4 together with 48.5% of the evaluated isolates. These bacteria were not able to grow under temperatures of 43 and 48 °C; however, they grew until 2% NaCl content on the other tested temperatures. Moreover, these bacteria showed greater CSU than the bacteria of the PG1 (Table S1). These results corroborate those of Dall’Agnol et al.,66 Dall’Agnol RF, Ribeiro RA, Ormeño-Orrillo E, et al. Rhizobium freirei sp. nov., a symbiont of Phaseolus vulgaris that is very effective at fixing nitrogen. Int J Syst Evol Microbiol. 2013;63:4167-4173. who reported a greater capacity of R. tropici CIAT899 to use C source as compared to R. freirei PRF81.

When NN and NDM were evaluated simultaneously, verified that 80% of the isolates had better or equal results compared to those of the R. tropici and R. freirei reference strains. Because NDM shows a better correlation with symbiotic performance,3636 Hungria M, Bohrer TRJ. Variability of nodulation and dinitrogen fixation capacity among soybean cultivars. Biol Fertil Soils. 2000;31:45-52. our results demonstrated that 17 isolates produced similar amounts of NDM compared to the reference strains R. tropici CIAT899 and R. tropici H12, indicating the high symbiotic efficiency of these isolates.

The authors thank the National Council for Scientific and Technological Development (CNPq) and the Brazilian Agricultural Research Corporation (Embrapa) by the technical and financial support.

Thumbnail
Fig. 1
Consensus dendrogram obtained by combining CSU and TST data of 98 isolates from wild genotypes of common bean. The dendrogram was generated using the UPGMA algorithm, and the similarity matrix was determined using the Jaccard coefficient.

Thumbnail
Fig. 2
Consensus dendrogram obtained by combining the REP and BOX-PCR data of 55 isolates from wild genotypes of common bean. The dendrogram was generated using the UPGMA algorithm, and the similarity matrix was determined using the Jaccard coefficient.

Fig. 1   Consensus dendrogram obtained by combining CSU and TST data of 98 isolates from wild genotypes of common bean. The dendrogram was generated using the UPGMA algorithm, and the similarity matrix was determined using the Jaccard coefficient.

Fig. 2   Consensus dendrogram obtained by combining the REP and BOX-PCR data of 55 isolates from wild genotypes of common bean. The dendrogram was generated using the UPGMA algorithm, and the similarity matrix was determined using the Jaccard coefficient.