It has been established that phenotypic characteristics alone are not enough to allow a proper classification among the lactic acid bacteria. Thus, various reviews described the divergence of the results obtained using traditional phenotypic tests and the molecular taxonomy (10,11,15,25). The phylogenetic structure of this group is now well defined and is based on phenotypic division important instrument of group identification and classification as well as based on the data obtained from rRNA sequencing and DNA-DNA hybridization.

Ribosomal operons have acquired paramount relevance for the study of bacterial evolution and phylogeny. The 16S rRNA and 23S genes are the most widely used molecular chronometers for inferring microbial phylogeny and have been instrumental in developing a comprehensive view of the microbial systematic (9). The phylogenetic classification of prokaryotes with rDNA sequences is based on the assumption that the differences in sequences reflect the evolution of the organisms that they have been extracted from. For this reason, in the past few years, study based on the analysis of ribosomal sequences or genes encoding rRNA, were developed and used for to discriminate species of Lactobacillus or to identify different probiotic bacteria (18,24).

The sequences of multicopy rRNA genes are identical or nearly identical. The sequence of the different rrn operons existing in a given genome could vary up to 5% (4,16,23). The analysis of sequences found in the databank rrndb (Ribosomal RNA Operon Copy Number Database, http://rrndb.cme.msu.edu) revealed a variation of 1.23% between the operon sequences of E. coli and those of 14 others species (14).

The organization of the genes of the ribosomal operon is similar among the eubacteria. Basically, rrn operon contains the genes encoding the 16S, 23S and 5S ribosomal RNAs, which are organized as follows: 16S - spacer region 1 - 23S -spacer region 2 - 5S. The spacer regions are called "short" (S) when they do not encode any tRNAs, and called "long" (L) when a tRNA sequence is present (22). The presence of a tRNA encoding sequence within the spacer region 2 is not the nule in bacteria (5). Among the prokaryotes, the size, organization and number of rrn operons depends on the species. The highest copy number of rrn operons per genome (15 copy) was found in spore forming bacteria, like Clostridium paradoxum, while the lowest (one copy) was found in Mycoplasma pneumonie and Rickettsia prowazekii (13). In acid lactic bacteria, the number of operons varies from two in Lactobacillus brevis (14) to six in Lactococcus lactis (12,24) and Lactobacillus delbrueckii (17).

However, there is still limited knowledge of the organization of rrn operons in Lactobacillus delbrueckii. Because of its potential in the food industry as well as its clinical importance, the probiotic strain Lactobacillus delbrueckii UFV H2b20 has been studied in our laboratory. Preliminary analyses showed the existence of at least three copies of the rrn operon and polymorphism among the genes encoding the 16S rRNA. Intraspecific differences among industrial probiotic strains need to be established in order to monitor colonization in human and animal tests as well as their use in industrial products. We report here the partial characterization of a rrn operon of L. delbrueckii UFV H2b20 strain.

Construction and screening of the genomic library of Lactobacillus delbrueckii

The genomic library of Lactobacillus delbrueckii UFV H2b20 was constructed in lambdaGEM®-11 phage (Promega - BamH I Arms, Cat. nº B1901) according to the manufacturer's instructions. The 16S rDNA of the strain was previously cloned in pGEM®-T Easy (Promega), labelled using the Primer-It Fluor Fluorescence Labeling Kit as described by the manufacturer (Statagene), and used as probe to screen the genomic library. The genomic library was transferred to Nylon membranes which were pre-hybridized for 2h at 65ºC in pre-hybridization buffer (SSC 5X, SDS 0.5%, Denhardt solution 5X, salmon sperm DNA 100 mg/mL) and hybridized 4h at 65ºC in the pre-hybridization buffer containing the rDNA 16S probe (15 ng/mL). Kodak X-OMAT K films were exposed to the membranes for 30 min at room temperature, and developed according to manufacturer's instructions. Insert of the positive clones were subject to phage DNA extraction and DNA was digested by SacI or XhoI according to the manufacturer's instructions (Promega), then analysed by Southern blot in the hybridisation conditions described above, using the 16S DNA probe. According to the restriction pattern and the Southern blot, five clones were selected and subcloned as 1.5 kb fragments in pBluescript by a shotgun method (Brazilian National Genome Project Consortium, 2003). Recombinant plasmids were used to transform the strain E coli (21).

After transformation, about 200 colonies for each clone previously selected were pick-up and used for a subsequent sequencing. Plasmidic DNA was extracted and the inserts were sequenced with the primer forward M13 using the MegaBace 1000 DNA Analysis System (Molecular Dynamics & Life Science). Sequences were analysed using the Phred/Phrap software (www.phrap.org) and compared with the sequences available in the GenBank database (BLAST programs - www.ncbi.nlm.nih.gov). Contigs were defined by sequence overlapping as used for genome organization analysis (3).

The sequence analysis of L. delbrueckii UFV H2b20 rDNA showed that the rrn operon organization in this strain was similar to the one observed in the most eubacteria: the 3'end of the 16S rDNA preceded the spacer region 1; the 3'end of the rDNA 23S preceded the spacer region 2 that was followed by rDNA 5S. The Fig. 2 shows the organization of the rrn region of L. delbrueckii UFV H2b20. 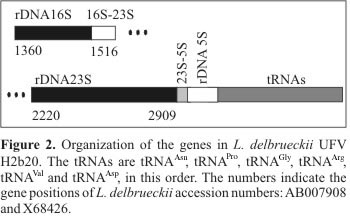 Sequences homologous to encoding elements associated to the rrn operons were also detected. We observed, at the 3' end of the rDNA 5S, 6 tRNA sequences which, in the following order, were homologous to the tRNAAsn, tRNAPro, tRNAGly, tRNAArg, tRNAVal and tRNAAsp of L. delbrueckii (accession number X15245) (Fig.1B ). Little information has been available about tRNA genes associated with rrn operon in Lactobacillus. However, in other species such as Bacillus subtilis, the 10 rrn operons were associated with groups of tRNAs: tRNAVal, tRNAThr, tRNALys, tRNALeu, tRNAGly, tRNAArg, tRNAPro, and tRNAAla were found located between the rrnJ and rrnW operons. In the 3' end of the rrnE operon, were found two tRNA genes, one for the methionine, the other for the aspartic acid (7, 20). In Staphylococcus aureus, the 3' ends of the main ribosomal operons were associated with tRNA encoding sequences (7). A tRNA for proline was also found beyond the rDNA 23S in the 3' end of an operon of Streptococcus mutans (19).

The special probiotic properties of L. delbrueckii UFV H2b20 have motivated the molecular characterization of this strain. Unique features of its rrn operons can be exploited to identify it among others of the same species, since rrn sequences are important tools for inter and intra-specific identification.

Dr. J.T. Magalhães is supported by reseach grants from the FAPEMIG and the CNPq (Conselho Nacional de Desenvolvimento Científico). We are grateful to Dr. F. Micheli (CIRAD, Montpellier, France) for helpful discussion and advice on the manuscript. We also thank the team of the "Laboratório de Genética e Biologia Molecular" of the "Universidade Estadual de Santa Cruz" (UESC, Bahia, Brazil), and G.A.G. Pereira (UNICAMP, São Paulo, Brazil) for kindly providing assistance in the sequence analysis.