The genus Cylindrocladium Morgan (teleomorph: Calonectria De Not) comprises species considered soil inhabitants that are saprophytes and facultative parasites, widespread in different environments all over the world (1). Typical symptoms caused by the pathogenic species are root rot, damping-off, wilt, leaf spotting, or necrotic lesions on fruits (7).

The purpose of the present study was to isolate species of Cylindrocladium from the rhizosphere of various plants by a baiting method, to identify them by morphological criteria and to check their pathogenicity on eucalypt seedlings under greenhouse conditions.

Small pieces of Ricinus communis L. leaves were disinfected (4), and placed upon soil samples of 20 g in sterile Petri dishes, collected from the rhizosphere of various plants (Table 1) and moistened with sterile distilled water (3). The baits were incubated for two days under alternating light at a temperature of 25ºC and mycelia grown on the leaf segments were transferred to Petri dishes with PDA (Potato-Dextrose-Agar) to obtain pure cultures. For morphological identification, segments of disinfected Ricinus leaves were inoculated with plugs of 5mm diameter from a young mold colony grown on PDA and leaves were kept in a Petri dish on a cotton swab moistened with sterile distilled water as above, until the formation of fruiting bodies. These were stained with Amann's blue (4) on microscope slides and observed under a light microscope. Of each isolate, average length and width of 20 conidia were determined with an ocular micrometer. Shape and septation of conidia were also considered, as well the shape of the vesicle (1,2,7). Seedlings of eucalypt (Eucalyptus citriodora), 40 days after germination, were inoculated on both hypocotyls and leaves. Plugs as above were placed upon a slight incision in hypocotyls and fixed with Scotch tape. With leaves, the plug was put on the upper surface without wounding. Following inoculation, the plants were incubated for 48 h in a moist chamber at a temperature of 25ºC. The experiment was completely randomized using three replications in each treatment. The size of the lesions was measured four days after the inoculation. These data were subjected to Duncan's test, comparing means at a 5% level of significance.

Baits of Ricinus leaves as described permitted to obtain in high yield, 16 isolates of Cylindrocladium. This method was introduced by Orrego Fuente et al. (6), who used three different baits, but Ricinus leaves gave the best results.

From 16 isolates obtained, 12 were identified as Cylindrocladium scoparium (Cs), and four as C. clavatum (Cc). Conidial lengths of C. scoparium varied between extremes of 32-60 µm, and C. clavatum 37-49 µm (Table 1). Crous and Wingfield (1) found a higher range (40-66 µm) for C. scoparium cultured on CLA (Carnation Leaf Agar), and Moreira et al. (5) reported a lower range (24.5-43.5 µm) for this specie grown on Ricinus leaves. For C. clavatum, there were also small differences between the sizes of conidia observed and those cited by other researchers (1,7). However, the data of Hodges and May (2) were identical to the values described here. The width of conidia was much alike in both species and the mean of 4 µm was equal for all isolates except Cc-Cel.15 that seemed slightly slimmer. A similar value was reported by others (1,2,5).

The species C. scoparium displayed hyaline and septate hyphae, conidiophores with di- or trichotomic branches composing phialides which vary between doliiform and reniform, and a septate stipe with a pyriform or ellipsoidal vesicle in the apical end; the conidia were cylindrical with rounded ends, hyaline and bicelular. The colony grown on PDA was typically light brown with a white border and a slightly irregular margin (Fig. 1A). C. clavatum showed the same features of hyphae, conidiophores and conidia as the other species; but had a clavate vesicle on an also hyaline septate stipe. C. scoparium formed on PDA a colony with a dark brown center and an irregular white border (Fig. 1B). Both species developed also microsclerotia, but the production of these resistant structures and the spatial arrangement of the cells in their interior are inadequate for taxonomy (1).

With eucalypt seedlings inoculated on hypocotyls or on leaves, all isolates of Cylindrocladium were pathogenic (Figs. 1C, D), but not in the same degree. Cs-Ara.1 caused wilt as well as collapse of the three target plants tested 48 h after their inoculation and could thus be considered as the most aggressive isolate, although its hypocotyl lesions did not look different from the other isolates (Table 1). Patent pathology was seen at least in two of three replications of the other isolates, after 96 h of incubation, with exception of Cc-Pin.14 and Cc-Uru.16, which induced only modest necrosis in the hypocotyl without any collapse of plants. Reproductive structures of the pathogen could be detected in only one of the lesions produced by Cc-Pin.14 and Cc-Uru.16, respectively. The isolates of C. clavatum were generally less aggressive to eucalypt plants than C. scoparium, although Cc-Euc. 9 came from a eucalypt rhizosphere.

C. scoparium was reported to cause wilt, collapse and death in all plants of Eucalyptus camandulensis Denh., six days after inoculation (6). Hodges and May (2) found C. clavatum preferentially on Pinus sp., in spite of its many other possible host plants. 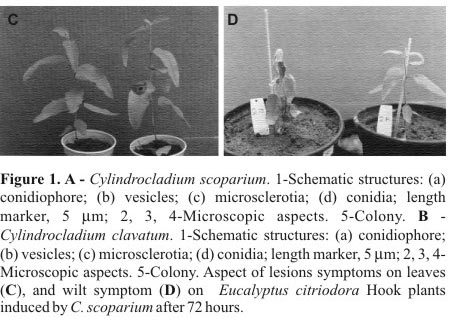