Immunoexpression of cyclooxygenase-1 and -2 in ulcerative colitis

Immunoexpression of cyclooxygenase-1 and -2 in ulcerative colitis

Ulcerative colitis (UC), which belongs to the spectrum of inflammatory bowel disease (IBD), is a disease of the colon and rectum of unknown etiology which is characterized by a nonspecific chronic inflammation restricted to the mucosal and submucosal layers and mediated by a concerted response of cellular and humoral events (1). Prostaglandins (PGs), thromboxanes, and leukotrienes represent the eicosatetranoic (arachidonic) acid metabolites that are collectively referred to as eicosanoids. PGs are produced via the cyclooxygenase (COX) pathway and exhibit both pro- and anti-inflammatory effects (2). COX is now known to exist in three isoforms: COX-1, COX-2, and COX-3. COX-1 is a constitutively expressed 66-kDa enzyme, showing low or no expression in a variety of tissues (3,4) including the intestine and colon (2). The COX-1 gene is considered to be a housekeeping gene and is believed to maintain the cell integrity of the gastrointestinal tract (2,5), the regulation of blood flow through the kidneys, and platelet aggregation (6). COX-2 is an interferon-g-induced 70-kDa enzyme which presents 61% homology to COX-1 (7). The enzyme is induced in response to cellular activation mediated by hormones, pro-inflammatory cytokines and growth factors. It is an important mediator of the inflammatory process (2,5) and carcinogenesis, as well as in the progression of a newly developed carcinoma (8,9). COX-3, possibly a variant of COX-1 since it is derived from the same gene, has been demonstrated in vitro in macrophage cell lines, and is mainly found in the cerebral cortex, spinal cord and heart (10,11).

There are markedly elevated levels of PGs in the mucosa and rectal dialysates from IBD patients (12). The increased release of PGE2 observed in UC may therefore originate from a relatively small number of recruited inflammatory cells (13). The cellular origin of these PGs and the relative contributions of COX-1 and COX-2 to their production have not been fully investigated.

The objectives of the present study were to analyze the immunoexpression of COX-1 and COX-2 proteins in biopsies from UC patients and to correlate it with histopathological parameters and clinical follow-up.

Biopsies from the files of the Department of Pathology, obtained from 42 consecutive patients with UC seen at the Inflammatory Bowel Disease Clinic of the Gastroenterology Division, Paulista Medical School, São Paulo Federal University, were studied. Only patients with all pertinent clinical and evolutive data as well as with adequate biopsy material were included in the study. Patient characteristics, including gender, age, disease extension, and clinical activity were obtained from the medical records. All procedures were approved by the Ethics Committee of the Institution. Fifteen samples of colorectal adenocarcinoma and 14 of large bowel with no histological changes were randomly selected for positive and negative controls, respectively.

Evaluation of COX-1 and COX-2 reactivity was performed according to a previously described scoring system (14) with staining intensity graded as 1 (weak), 2 (moderate), or 3 (strong), and the positively stained area as 0 (<10%), 1 (10-40%), 2 (40-70%), and 3 (³70%). Both parameters were evaluated in the cytoplasm of epithelial and inflammatory cells. Total scores for grade and area classified as ³3 were defined as positive expression and those classified as <3 as negative.

Data are reported as means ± SD. The chi-square test and Fisher's exact probability test, where appropriate, were used to correlate the immunoexpression of COX-1 and COX-2 with the clinicopathological parameters. The Kruskal-Wallis test was used for comparison between the UC and control groups. A P value <0.05 was considered statistically significant.

The correlation between positive and negative COX-1 and COX-2 cellular immunoreactivity and the clinicopathological parameters analyzed showed no significant differences (P > 0.05; Tables 1 and 2).

Comparison of the immunohistochemical pattern between the control, UC and colorectal adenocarcinoma groups was shown in Figure 1. 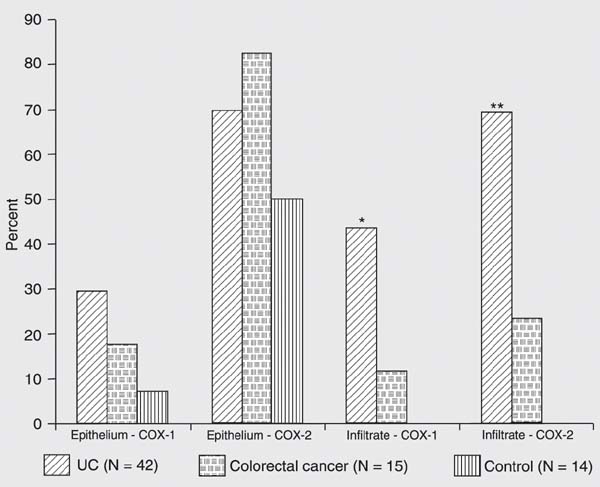 Inflammation involves plasma-derived and cellular events normally occurring in response to tissue injury or infection. In chronic inflammation, the process continues due to the persistence of the injury and consequently of the inflammatory mediators. The focus on salicylates has led to studies on the arachidonic acid cascade and on COX and 5-lipoxygenase products. Clinical trials with non-steroidal anti-inflammatory drugs in IBD showed no effect or even a detrimental effect. This finding is in striking contrast to the efficiency of non-steroidal anti-inflammatory drugs in rheumatoid arthritis - another autoimmune disease involving PGs - and it might be inferred that COX is of no relevance in IBD (16-19).

COX-2 was shown to be responsible for the increase in COX activity in inflammation; increased concentrations of COX-2 have been found in synovial tissue during attacks of rheumatoid arthritis (20). The discovery of COX-2 reopens the discussion about the importance of COX products in IBD. It has been shown that COX-1 and COX-2 exhibit differences in their sub-cellular localization and ability to metabolize arachidonic acid (21).

To the best of our knowledge, no study has correlated cellular immunoexpression of COX-1 and COX-2 with the clinicopathological findings in IBD. However, Hendel and Nielsen (16), studying the expression of COX-2 mRNA in IBD, demonstrated a clear relationship between endoscopic activity and the relative presence of this expression.

The immunoreactivity of COX-2 was observed in epithelial and inflammatory cells in 69% of patients with UC, indicating that this immunoreactivity is strongly induced not only in lamina propria cells but also in apical epithelial cells of the colonic mucosa in IBD (23,24). Analysis of the immunohistochemical results for the various groups showed a difference in the distribution of COX-1 and COX-2 in the inflammatory cells, with a higher proportion of positive cases in the UC group.

Concerning COX-2, investigators (24-26) did not detect immunolabeling in normal epithelium. However, in the present series, COX-2 immunopositivity in epithelial cells was observed in 50% of the control cases, a fact also reported by Jackson et al. (27). Other studies have reported that COX-2 is constitutively expressed in a variety of tissues such as kidney, spine and eyes (28-30).

COX-2 was observed in epithelial cells of patients with UC, as well as of patients with colorectal carcinoma. Singer et al. (24), studying the immunoexpression of COX-1 and COX-2 in UC tissues, Crohn's disease and normal epithelium, observed greater immunolabeling of COX-2 in epithelial cells of UC and Crohn's disease samples, suggesting that the persistent expression of this protein might be related to an increased risk of carcinogenesis. In fact, large amounts of COX-2 have been demonstrated in pre-neoplastic tissues (31,32) and in various carcinomas (33), reflecting the effects of oncogenes and growth factors which are known to be inducers of this enzyme (34,35). In addition, Agoff et al. (36), using molecular biology and immunohistochemistry, observed that in UC associated with neoplasia over-expression of COX-2 was present in all stages of the neoplastic process.

As reported in other studies (5,28), immunolabeling of this protein was also frequently observed in fibroblasts.

Based on the present study and on data of others (37,38), we suggest that COX-1 is not an exclusively constitutive enzyme and similarly to COX-2, may have a role as a mediator of inflammation.

Our data demonstrate that immunohistochemistry permitted the identification of the COX-1 and COX-2 expression in epithelial and inflammatory cells of biopsies from UC patients. COX-2 showed low immunoexpression in normal colon and higher expression in colorectal adenocarcinoma. COX-2 may probably play a role in the pathophysiologic processes of inflammatory bowel disease and in the development of neoplasia. Treatment with selective COX-2 inhibitors might be an additional option for therapy.

Thumbnail
Figure 2.
Comparison of the immunohistochemical results between ulcerative colitis (UC) and colorectal adenocarcinoma groups and control. The numbers in parentheses are the number of patients. *P = 0.002 and **P < 0.001 for cyclooxygenase-1 (COX-1) and -2 (COX-2), respectively, compared to colorectal adenocarcinoma groups (Kruskal-Wallis test).
Thumbnail
Table 1.
Clinical characterisitcs of ulcerative colitis patients and immunoexpression of cyclooxygenase-1 (COX-1) and -2 (COX-2).
Thumbnail
Table 2.
Histopathological characterisitcs of ulcerative colitis patients with immunoexpression of cyclooxygenase-1 (COX-1) and -2 (COX-2).