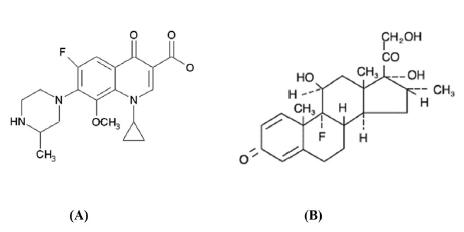 FIGURE 1
Chemical Structures of gatifloxacin (A) and dexamethasone (B).

Gatifloxacin (99.7%) and dexamethasone (99.2%) reference standards were obtained as gift samples from a pharmaceutical laboratory located at Lahore, Pakistan. GATE DX and GATIBLU-D ophthalmic preparations (3 mg/mL gatifloxacin and 1 mg/mL dexamethasone) were analyzed during the applications of the method. All other chemicals and reagents were of highest analytical grades available in the market. For filtration of all solutions including mobile phase, 0.45 mm nylon filters (Millipore, USA) were used.

An appropriate volume of commercial ophthalmic solution was diluted with mobile phase to get 0.000160 mol/L gatifloxacin and 0.000052 mol/L dexamethasone.

1250 mL of solution A was mixed with equal volume of human urine for 2 minutes, followed by its centrifugation for 10 minutes at 4000 rpm. The supernatant (200 mL) was added in 2300 mL of the mobile phase. The final concentration of solution thus obtained was equal to (0.000160 mol/L of gatifloxacin and 0.000052 mol/L of dexamethasone).

Solucion A, 50 mL, was mixed with 250 mL human serum, followed by adding 950 mL mobile phase. The mixture was centrifuged for 10 minutes at 4000 rpm and the supernatant was shifted in polypropylene tubes having concentration equal to 0.000160 mol/L for gatifloxacin and 0.000052 mol/L for dexamethasone.

Synthetic mixtures of both analytes were analyzed in order to evaluate accuracy. The synthetic mixture was prepared by mixing appropriate amounts of gatifloxacin, dexamethasone, benzalkonium chloride and sodium chloride in 1L purified water. The solution was then diluted to get solutions of three different concentrations (50-150%) of working solution concentration (0.000160 mol/L gatifloxacin and 0.000052 mol/L dexamethasone). These solutions were further used to test recovery studies.

Precision was evaluated by calculating % RSD of the samples analyzed within one day for five times and for sample analyzed for three days. Three different concentration of solutions were used for both within-day and between-day precision.

To four separate measuring flasks, each contained 1 mL solution A, 5 M hydrochloric acid (1 mL) was mixed and kept in chamber at 40 oC/75% RH for 1, 8, 16 and 23 h followed by neutralization and completing to the mark.

Base, Oxidative and Thermal Degradation Studies

Three separate 25 mL measuring flasks containing 1 mL of solution A were exposed to direct sunlight for 2, 4 and 6 h, followed by marking the volume.

Reverse phase (RP) chromatography has been used widely in the last two decades for the separation of many organic molecules particularly pharmaceuticals because of containing major non-polar groups as well as containing unsaturated π electrons. As both the investigating pharmaceuticals have this common feature in their structure, so in this study, an RP-HPLC was developed for simultaneous analysis of gatifloxacin and dexamethasone in different matrices like pharmaceuticals, human serum and urine.

Both dexamethasone and gatifloxacin have been analyzed individually in previous methods (Razzaq et al., 2013RAZZAQ, S.N.; ASHFAQ, M.; MARIAM, I.; KHAN, I.U.; RAZZAQ, S.S. Simultaneous RP-HPLC determination of sparfloxacin and dexamethasone in pharmaceutical formulations. Braz. J. Pharm. Sci., v.49, p.301-309, 2013.; 2014; Khan et al., 2014KHAN, I.U.; RAZZAQ, S.N.; MARIAM, I.; ASHFAQ, M.; RAZZAQ, S.S. Stability-indicating RP-HPLC method for simultaneous determination of gatifloxacin and flurbiprofen in binary combination. Quím. Nova, v.37, p.349-354, 2014.). In order to develop a method that can quantify both of these simultaneously, we took advantage of the problems faced during the previous studies, where dexamethasone peak showed high tailing on C18, Phenyl-2, and Cyano columns but symmetrical/good peak on C8 (Razzaq et al., 2013; 2014; Khan et al., 2014). So we chose C8 column for this FDC. Some minor changes in the composition of organic and aqueous phase as well as pH were good enough to resolve both these compounds from each other as well as from induced degradation products. The final composition of the mobile phase thus used was, methanol: phosphate buffer 0.02 M, pH 3.0 (58:42, v/v) that resulted in good/symmetrical peaks.

Validation parameters like linearity, accuracy, precision, robustness, specificity, limit of detection and quantitation as recommended by ICH (International Conference on Harmonization, 1996) were evaluated when validating this method. 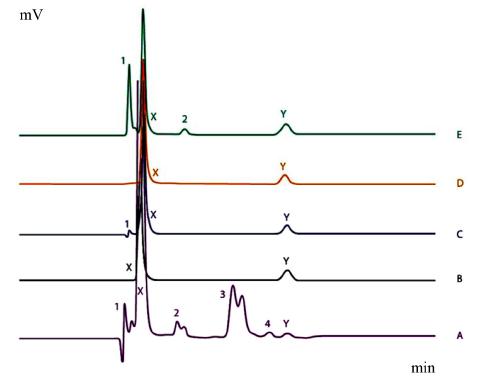 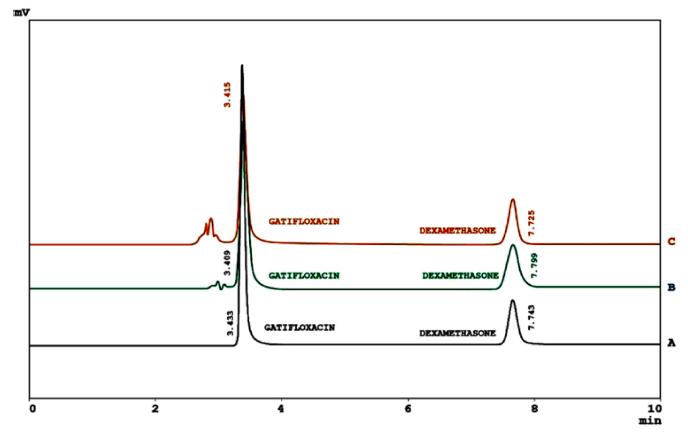 FIGURE 3
Chromatograms of gatifloxacin and dexamethasone in Pharmaceutical Formulations (A), Human Serum (B) and Urine (C).

Synthetic mixtures of both analytes were analyzed to evaluate accuracy. Solutions of three different concentrations (50-150%) of working solution concentration (0.000160 mol/L gatifloxacin and 0.000052 mol/L dexamethasone) were used to test recovery. The results are presented in (Table I), indicating good recovery.

Thumbnail
TABLE I
Accuracy of the proposed HPLC method

Precision was evaluated by calculating % RSD of the samples analyzed within one day for five times and for sample analyzed for three days. Three different concentration of solutions were used for both within-day and between-day precision. The results are presented in (Table II).

Slight variation in the chromatographic conditions were made in order to evaluate robustness. Results presented in (Table III and Table IV) showed little effect on chromatographic parameters.

The chromatograms involving forced stresses are shown in (Figure 2), whereas the results describing percentage degradation and extent of degradation are provided (Table V).

Both the drugs were degraded with ease under most of the stress conditions (except thermal and oxidative). When comparing the vulnerability of both drugs, it was observed that dexamethasone was easy to degrade compared to gatifloxacin (31% and 95 % degradation under acidic and basic conditions). Up to 4 degradation products were observed during the mentioned stresses.

Thumbnail
FIGURE 1
Chemical Structures of gatifloxacin (A) and dexamethasone (B).

FIGURE 1   Chemical Structures of gatifloxacin (A) and dexamethasone (B).

FIGURE 3   Chromatograms of gatifloxacin and dexamethasone in Pharmaceutical Formulations (A), Human Serum (B) and Urine (C).

TABLE I   Accuracy of the proposed HPLC method