Commercial reforestation of Brazilian native species to produce hardwood for sawmills has been recently intensified in the country. Among the potential species planted by the logging industry is guanandi (Calophyllum brasiliense Cambess) because it is widely distributed in the country, highly adapted to different soil and climate conditions, good bole form and high quality timber. The development of genetic improvement programs should prioritize gains in productivity and yields in the medium and long term. For such programs to be successful, the study of vegetative propagation techniques to abbreviate steps in forest improvement and allow its mass production is fundamental. To assess the viability of vegetative propagation of the species, two successive experiments were carried out during two years testing the best type of cutting, hormone concentration and management. Different cuttings types submitted to increasing doses of indole-butyric acid (IBA) were tested to evaluate survival, sprouting, rooting and callus formation. Results indicate that the species is viable for vegetative propagation with 85 to 90% rooting of cuttings from seedlings in the IBA concentrations of 3000 to 7000 mg.L-1. For the cuttings, sprouting from the base of adult trees 3000 mg.L-1 was the best concentration of IBA.

According to the Brazilian Association of the Mechanically Processed Wood Industry - ABIMCI (2008)ASSOCIAÇÃO BRASILEIRA DA INDÚSTRIA DE MADEIRA PROCESSADA MECANICAMENTE. Estudo setorial 2008 indústria de madeira processada mecanicamente. Curitiba, 2008. 56 p., plantation forests covered 5.98 million ha in 2007, of which 62.7% were eucalyptus, 30.2% pine, and 7.1% other species such as acacia, rubber trees, paricá, and teak, among others. The development of the industry was focused on the production of exotic species, which corresponded to 97% of the area planted in the country in 2007 and only 3% with commercial plantation of native species.

Interest in the production of hardwood with high aggregated value has grown in the last decade in Brazil, especially for the plantation of teak (Tectona grandis), Australian cedar (Toona cilliata), and African mahogany (Khaya sp.) among the exotic species, and guanandi (Calophyllum brasiliense Cambess) and mahogany (Swietenia macrophylla) in the native species group.

The economic uses of vegetative propagation for seedling production in the forestry sector is justified when it has availability of high productive genotypes and, or, the seed is a limited resource (Xavier et al. 2003XAVIER, A.; SANTOS, A.; WENDLING, I.; OLIVEIRA, M.L. 2003. Propagação vegetativa de Cedro-rosa por miniestaquia. Revista Árvore, 27(2):139-143.). For Calophyllum brasiliense, seeds are not a limitation for commercial seedling production, since many commercial plantations are producing seeds in quantity, regularly and with high quality. In this study, the focus was to develop the vegetative propagation technics for Calophyllum brasiliense, to produce clonal seedling of high productive genotypes.

The study was part of the Calophyllum brasiliense Genetic Improvement Program of the Tropical Flora Reforestation Company in partnership with the Faculty of Agrarian Sciences (FCA/UNESP), Botucatu campus, Department of Plant Production and the graduate program in Forestry.

The study included two rooting trials between 2007 and 2009 in the greenhouse of the Plant Production Department, FCA/UNESP. The cuttings used in the study were produced in the nursery and in the commercial plantation sites of Tropical Flora Reforestation Company, in the city of Garça, SP.

Different concentrations of indole-butyric acid (IBA) were tested to identify the most adequate concentration for the species. Other parameters assessed were the provenance of the cuttings (from seedlings or from different parts of the tree top, crown or base), either lignified or young.

Materials used in the experiments, such as cartridges, trays and substrates were provided by the nursery from the Department of Natural Resources, FCA/UNESP. The same commercial substrate was used for all rooting trials, and it was composed by pine bark, vermiculite, acidity corrector, and mineral fertilizers with a cation exchange capacity of 200 mmol c.kg-1.

In the first rooting trial (Table 1) several possibilities were tested to find a direction for the following trials. Thus, different types of cuttings from trees were used to test rooting of mature material, cuttings 10 cm long were collected from three positions on the trees: base (0 to 50 cm height), crown (0.5 to 2.0 m height), top (> 3.0 m height), and divided in two groups, lignified and young. The trees that provided the material for the first trial came from a productive plot of Tropical Flora, in Garça/SP, with four years of age, of mixed provenances, with good nutrition conditions and free of pests or diseases. In all types of cuttings, five doses of IBA were tested, including a control: 0, 100, 1000, 5000 and 10000 mg.L-1. Cuttings were planted in polyethylene cartridges of 45 mm diameter and 68-cm³ volume. The cuttings were removed from the plastic tubes to assess rooting and callus growth. The test included 30 treatments, in triplicate, with 4 cuttings per treatment, starting on September 19, 2007, and assessed on January 20, 2008. 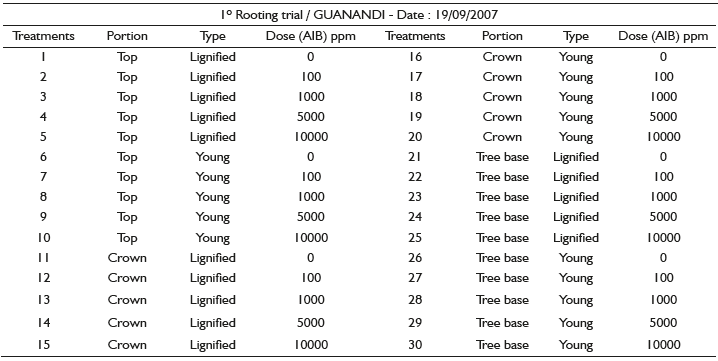 In the second rooting trial (Table 2), was tested cuttings from the tree base and cuttings from seedlings was included. Two more doses of IBA were added, with a total seven doses, including control treatment. Six-months cuttings originated from the same seed batch from nursery was used (40 cm height, good health and ready for planting).

Survival, rooting, sprouting and callus growth were assessed 120 days after the implementation of the trial. Mean survival of the treatments was of 60.2%, and mortality was mainly from fungi attack on the cuttings, probably caused by the long period inside the greenhouse and/or by the humidity excess throughout the 120 days of experiment. No fungicide was applied during the experiment.

Table 3 presents the results for survival rate, rooting, sprouting, and callus growth of the first trial. The best results both for young and lignified cuttings were from the tree bases(treatments 21 to 30).

Thumbnail
TABLE 3
Percentage of survival, rooting, sprouting and callus growth (treatments 1 to 30) with the five doses of indole-butyric acid (IBA) tested (0, 100, 1000, 5000 and 10000 mg/L) for the two types of cuttings (young and lignified) obtained from the top, crown and base of Calophyllum brasiliense and the coefficient of determination (R²).

Results from the analysis of variance (ANOVA) and Tukey test at 5% probability are presented in Table 4. No significant differences for survival, sprouting and callus growth were observed, whereas for rooting there was significant differences in treatments 18, 23, 25, 27, 28 and 29, all from cuttings from the tree base, except treatment 18. The best performance was with treatment 28, with 83.3% rooting and 100% survival (Table 4). The coefficient of variation for rooting, the main objective of the present study, was 18.17%, below the desirable 20% limit. Comparing the three portions (top, crown, base) of the trees from where the cuttings were taken, those from the base of the trees (0 to 50 cm) resulted in higher survival, rooting and sprouting. Only callus growth rate was lower for young or lignified cuttings.

When treatments are analyzed separately, lignified cuttings, presents the best results in the highest concentration of IBA tested (10000 mg.L-1). Best results for young cuttings were in the intermediate concentrations of IBA (1000 and 5000 mg.L-1), as shown in Table 3.

The treatments with the best performances were for cuttings from the base of the trees, both young and lignified, in the IBA concentrations of 1000 and 10000 mg.L-1, respectively.

Davis et al. (1986)DAVIS, T.D.; HAISSIG, B.E.; SANKHLA, N. 1986. Adventitious root formation in cuttings. Oregon: Dioscorides Press, 315 p. relates that young sprouts generally present lower lignification, which gets higher from the top to the base of the branches, where the tissue presents a higher grade of differentiation, with lower capacity to recover the meristem conditions, fundamental to start rooting, due to it the young cutting obtained a higher level of rooting. The low rate of rooting observed in the mature material from the planted trees tested confirm this affirmation, and when compared with 85% of average rooting achieved with cuttings of Calophyllum brasiliense of young material achieved by Silva et al (2010SILVA, R. L.; OLIVEIRA, M. L.; MONTE, M. A.; XAVIER, A. Propagação clonal de guanandi (Calophyllum brasiliense) por miniestaquia. Agronomía Costarricense 34(1): 99-104. 2010.).

The second trial aimed at verifying the best performance of cuttings from the tree base, which presented the best results in the first trial. This trial also tested cuttings from seedlings, a younger material with higher probability of rooting, and reduced the interval between the IBA concentrations (inclusion of 3.000 and 7.000 mg.L-1). Trial evaluation was carried out after 120 days of experiment, removing the cuttings from the tubes.

Thumbnail
TABLE 5
Percentages of survival, rooting, sprouting and callus formation according to cutting provenance and concentrations of indole-butyric acid (IBA) concentrations (0, 100, 1000, 3000, 5000, 7000 and 10000 mg.L-1) for Calophyllum brasiliense.

As shown in Table 5, the introduction of two more test-concentrations of IBA (3000 and 7000 mg.L-1)demonstrated the importance of reducing the interval between the concentrations tested in the first trial, as the IBA 3000 mg.L-1 presented the best results for the two types of cuttings.

High incidence of fungi diseases in the cuttings from the trees was noted, which caused lower survival, when compared to cuttings from seedlings. No fungicide was used throughout the experiment.

The best results for cuttings from trees and from seedlings were with treatments 4 and 11, respectively. Control plants also presented good survival and rooting rates, which revealed that the species has potential for natural vegetative propagation, and potential to rooting without use of IBA, as observed by Silva et al (2010SILVA, R. L.; OLIVEIRA, M. L.; MONTE, M. A.; XAVIER, A. Propagação clonal de guanandi (Calophyllum brasiliense) por miniestaquia. Agronomía Costarricense 34(1): 99-104. 2010.).

Calophyllum brasiliense is a feasible species for vegetative propagation through cutting technique and may be widely used in the mass production of improved material. Young cuttings from the base of the trees presented best results for mature material, and the best concentration of indole-butyric acid (IBA) was 3000 mg.L-1, with 75% rooting. Rooting of young material presented the best results, demonstrating good potential for the establishment of clonal plantations.

Dr. Edson Seizo Mori for all support, guidance and patiente, and the Tropical Flora Reflorestadora Ltda. for the incentive, opotunity and support to do my Masters along with my professional activities in the company.

TABLE 3   Percentage of survival, rooting, sprouting and callus growth (treatments 1 to 30) with the five doses of indole-butyric acid (IBA) tested (0, 100, 1000, 5000 and 10000 mg/L) for the two types of cuttings (young and lignified) obtained from the top, crown and base of Calophyllum brasiliense and the coefficient of determination (R²).