Graft-versus-host disease (GVHD) following liver transplantation (LT) is an uncommon complication but has high mortality and represents a major diagnostic challenge. GVHD occurs when immunocompetent donor lymphocytes originating from the transplanted liver undergo activation and clonal expansion, allowing them to mount a destructive cellular immune response against recipient tissues. Humoral GVHD is usually seen after an ABO-mismatched liver transplant, but cellular GVHD is directed against the major histocompatibility complex and often results in severe multisystem disease with high mortality.1

In 1988, Burdick et al.2 first described acute GVHD after orthopic liver transplantation (OLT). The incidence was reported to be 0.1% by United Networks of Organ Sharing, however some clinical trials reported an incidence of up to 1%.1,3 Skin rash and fever are the most frequent early signs, followed by leukopenia. The mortality rate of acute GVHD following OLT exceeds 75%.4 In most cases, death results from overwhelming sepsis or gastrointestinal bleeding as a consequence of bone-marrow involvement.4

It appears worthwhile to analyze our case against the background of a broad literature review, because of the low incidence of GVHD after LT.

A 64-year-old male with hepatitis C virus infection, alcohol-related cirrhosis and hepatocellular carcinoma in segments V, VI and VIII received a liver transplant from an ABO-identical (blood group A) 53-year-old male cadaveric donor. The donor was cytomegalovirus-seronegative and toxoplasma-seropositive. The recipient was cytomegalovirus-seropositive and toxoplasma-seropositive and had a body mass index of 24.5 kg/m2. The Child-Pugh score was A6 and the model end-stage liver disease score was 10. During transplantation, 2 units of concentrated red cells and 4 units of fresh frozen plasma were transfused. Initial immunosuppressants comprised tacrolimus (through levels 8-10 ng/ml) and Corticosteroid (500 mg methylprednisolone intraoperatively, 250 mg postoperatively, 1 mg/kg body weight on days 1 to 4, 0.5 mg/kg body weight on day 5, 0.4 mg/kg body weight on days 6 to 10, then tapering).

On day 9, an increase in hepatic enzymes aspartate aminotransferase and alanine aminotransferase was identified from a hepatic biopsy, where acute cellular rejection was diagnosed. The postoperative laboratory examinations are shown in detail in Tables 1 and 2.

The treatment was steroid pulse therapy using 500 mg methylprednisolone on five consecutive days. Sixteen days later, a new hepatic biopsy showed regression of the rejection. After recovery in timely fashion the patient was discharged home on day 25. The patient was readmitted on day 31 and presumptive diagnosis of GVHD was made on clinical grounds, which was supported by the presence of a skin rash and generalized maculopapular eruption (most accentuated on the abdomen, trunk and face) in conjunction with erythema and palm rash, fever, severe leukopenia (0.45 mil/mm3), anemia, low hemoglobin and low blood pressure levels and watery diarrhea. Skin biopsies were consistent with GVHD, showing vacuolar degeneration of the basal layer of the epithelium, epidermal infiltration by lymphocytes and necrotic eosinophilic keratinocytes. Other findings were as follows: spongiosis, basal cell hydropic changes, many apoptotic keratinocytes, and lymphocytic exocytosis (including satellite-cell necrosis) in the epidermis. Furthermore, there was subepidermal cleft formation (grade III of acute GVHD) (Figures 1 and 2). A myelogram performed a few days later revealed a hypoplastic bone marrow resulting in aplasia. The main microscopic features were single-cell necrosis (apoptosis) in the mucosa of all three organs. No specific infectious agents could be identified in those samples. The gastric mucosa had some gland abscesses and partial mucosal denudation. Genomic DNA from recipient peripheral blood showed the presence of both donor and recipient antigens on day 32 (chimerism). Flow cytometry indicated the level of donor T-lymphocyte macro-chimerism to be between 3 and 4%. The patient received 1 g intravenous methylprednisolone for 3 days, starting on day 31, and antithymocyte globulin (500 mg i.v. on five consecutive days): there was no improvement in the skin rash. 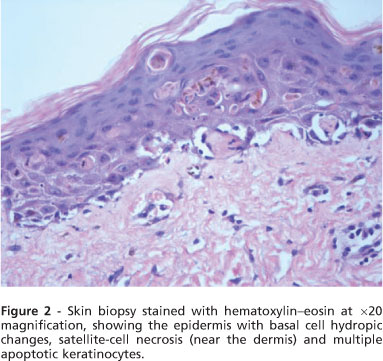 On day 36, there was a progressive worsening of the patient's clinical condition, with pulmonary and renal insufficiency, agranulocytosis, and, subsequently, multi-organ failure resulting in death.

The pathogenesis of acute GVHD involved clearly proinflammatory cytokine release caused by leukocyte destruction. Interleukin-2 was demonstrated to be a key mediator for the development of GVHD. Hence, its membrane-bound ligand, CD25, appears to be an attractive target for drug intervention in GVHD. There are three reported cases of patients in whom anti-CD25 monoclonal antibodies have been administered. All three patients were cured of GVHD.6,7

Tumor necrosis factor-alpha also plays an important role in the pathogenesis of GVHD and may therefore be an interesting therapeutic target. There are some single reports of the use of infliximab, a chimeric anti-tumor necrosis factor-alpha monoclonal antibody, against GVHD. Despite reducing some of the symptoms and organ manifestations, reported outcomes were poor.8,9

Chimerism, the coexistence of genetically different cells in the same organ or organism, was first recognized after LT in 1969 and may include replacement donor reticuloendothe-lial cells, endothelium, bile-duct epithelium, and hepatocytes with recipient tissue.10,11 Systemic microchimerism, where donor-derived cells (especially hematopoietic cells) establish themselves in the recipients, was first demonstrated after LT in 1992.12

As an estimated 109-1010 donor lymphoid cells are transplanted together with a liver graft,13 chimerism regularly occurs over a period of 3-4 weeks after LT. Thus, GVHD predominantly occurs in the first few weeks after LT.

It is assumed that macrochimerism with more than 1% of circulating nucleated cells of donor origin in the peripheral blood commonly precedes GVHD but this is not totally accepted at the time of diagnosis.14,15

Two main risk factors for the development of GVHD after OLT have been determined: human leukocyte antigen (HLA) matching between the donor and the recipient; and the recipient's age.1 Donor-recipient compatibility for HLA-B but not for HLA-A or DR was identified as a significant risk factor for the development of GVHD.16 With an HLA-A and HLA-B mismatch of 3-4, the relative risk of the development of GVHD after OLT was estimated to be 1%. Relative risk increased to 7% in the presence of 0-1 HLA-A and HLA-B mismatches, and reached approximately 12.5% in the additional presence of 0-1 HLA-DR mismatches.1

With increasing age of the recipient the risk of GVHD seems to rise. It was reported to be nine-fold higher for recipients older than 65 years of age compared with younger recipients,3 as was shown in our case. Concerning the risk factors for developing GVHD after LT, no correlation of autoimmune hepatitis or alcoholic liver cirrhosis in combination with glucose intolerance and hepatocellular carcinoma could be detected in our case.

In many cases, the first manifestation of the immune reaction of donor lymphoid tissue against host tissue occurs in the skin. A maculopapular eruption can be a clue to the diagnosis and may facilitate early modification of the therapeutic strategy. Differential diagnosis of skin symptoms includes drug-induced eruptions and viral infections. An accurate diagnosis can be achieved by using specific histological and immunohistochemical criteria. 19,20 Histological changes include the following: in grade I, lymphocytic infiltrates in the upper dermis without epidermal changes; in grade II, vacuolization of basal cells; in grade III, subepidermal clefts through confluence of basal vacuolization; and, in grade IV, massive necrosis of keratinocytes resembling toxic epidermal necrolysis GVHD.21

Our patient had an indisputable form of GVHD with the entire spectrum of signs andsymptoms. Onday31, the patient developed a fever, a skin rash, diarrhea, profound leukopenia, anemia, low hemoglobin and low blood pressure levels. A skin biopsy showed histological signs of GVHD, such as spongiosis, basalcellhydropicchanges, many apoptotic keratinocytes and lymphocytic exocytosis (including satellite-cell necrosis) in the epidermis. Furthermore, there was a subepidermal cleft formation (grade III of acute GVHD). The differential diagnosis can be difficult, as many other causes of these symptoms must be considered in the post-transplantation phase, most importantly, acute organ rejection and infectious complications.22

We failed to demonstrate bacterial, viral and fungal causes of gastrointestinal symptoms and the histology of resected specimens was consistent with GVHD.

We test peripheral blood for macrochimerism upon readmission of a patient showing typical symptoms of GVHD, and we routinely treat such cases as GVHD if peripheral blood chimerism is >1%, whilst supporting evidence for the diagnosis is sought.

Standard treatment of GVHD comprises increased immu-nosuppression with high-dose steroids and antibody preparations such as antithymocyte globulin, antilymphocyte globulin and Prednisolone. There is no evidence that steroids alone are effective in GVHD.14,23,24,25

Our case was subjected to treatment with methylpredni-solone and antithymocyte globulin, which was clearly ineffective.

As far as the treatment is concerned, the data suggest that an early start to therapy is no determinant of outcome. Broad antibiotic and antifungal prophylaxis is pivotal, because septic complications are frequent in GVHD.26 Another issue relates to the treatment of GVHD. It may be reasonable to focus treatment on the restoration of the host's immune system. Thus, there are recent reports of three patients with GVHD after OLT in whom immunosuppres-sion was stopped. Two of them survived, indicating a better outcome with this therapeutic strategy,16,27 by inducing a host-versus-graft alloimmune response against host-reactive donor-derived cells. Moreover, withdrawal of immunosuppression may help the recipient's immune system to reconstitute itself, thereby reducing the risk of infection. On the other hand, with regard to the risk of developing uncontrollable rejection, it seems that in patients with a peripheral chimerism of more than 10% after OLT, immunosuppressants can be reduced or even withdrawn without any increased risk of rejection.28

Another theoretical option that can be considered for GVHD after LT is re-transplantation. Basically, GVHD might be terminated by just removing the graft. However, so far there are no data in the literature supporting the idea of eliminating the donor-aggressive graft as an effective therapeutic option. One of the major doubts relates to the fact that the donor-reactive alloimmune response is no longer generated by the liver itself, but is generated by donor cells, which have already spread into the periphery and bone marrow of the host.29

In conclusion, although acute GVHD is rare complication of liver transplantation and the mortality is still very high, skin lesions represent an important tool for early diagnosis. The prognosis remains poor, and further research is needed to both clarify the pathogenesis of GVHD and provide new therapeutic agents for treating this condition effectively.

The authors are most grateful to Flávio M. Kawamoto and Evandro Sobroza de Mello for their contributions.