OBJECTIVE: To evaluate the impact of the creation of corneal flaps at different thicknesses on the biomechanical properties of swine corneas. METHOD: Twelve swine eyes were obtained to form two groups: 100 μm flap thickness and 300 μm flap thickness. Each eye was submitted to the following examinations: raster topography to investigate corneal curvature alterations, ocular response analyzer to investigate corneal hysteresis change, optical coherence tomography to measure central corneal and flap thickness and sonic wave propagation velocity as a measure of stiffness, before and immediately after flap creation. After flap amputation, surface wave velocity measurements were repeated. RESULTS: Measured flap thicknesses were statistically different for thin and thick flap groups, with an average of 108.5 + 6.9 and 307.8 + 11.5 μm respectively. Hysteresis and corneal resistance factor did not change significantly after flap creation in the thin flap group. With thicker flaps, both parameters decreased significantly from 8.0 +1.0 to 5.1 +1.5 mmHg and from 8.2 + 1.6 to 4.1 +2.5 mmHg respectively. Simulated keratometry values increased in the thick flap group (from 39.5 + 1 D to 45.9+1.2 D) after flap creation but not in the thin flap group (from 40.6 + 0.6 D to 41.4+ 1.0 D). Regarding surface wave velocity analysis, the surgical procedures induced statistically lower results in some positions. CONCLUSION: In the experimental conditions established by this model, thicker flaps presented a greater biomechanical impact on the cornea.

OBJECTIVE: To evaluate the impact of the creation of corneal flaps at different thicknesses on the biomechanical properties of swine corneas.

RESULTS: Measured flap thicknesses were statistically different for thin and thick flap groups, with an average of 108.5 + 6.9 and 307.8 + 11.5 μm respectively. Hysteresis and corneal resistance factor did not change significantly after flap creation in the thin flap group. With thicker flaps, both parameters decreased significantly from 8.0 +1.0 to 5.1 +1.5 mmHg and from 8.2 + 1.6 to 4.1 +2.5 mmHg respectively. Simulated keratometry values increased in the thick flap group (from 39.5 + 1 D to 45.9+1.2 D) after flap creation but not in the thin flap group (from 40.6 + 0.6 D to 41.4+ 1.0 D). Regarding surface wave velocity analysis, the surgical procedures induced statistically lower results in some positions.

CONCLUSION: In the experimental conditions established by this model, thicker flaps presented a greater biomechanical impact on the cornea.

Laser in situ keratomileusis (LASIK), which is one of the most commonly performed surgical procedures worldwide, can be associated with a rare but visually debilitating refractive instability called ectasia.1-3 During LASIK, an immediate near-circumferential severing of corneal lamellae results in a redistribution of stress and unprogrammed biomechanical shape changes.4,5 In human eyes, the relationship between depth of stromal disruption and refractive shift is non-linear and exhibits a transition from hyperopic shift to central corneal steepening with deeper stromal insults.3,6 This complex relationship has recently been modeled using a whole-eye finite element approach.7 Although some changes in the shape of the residual stroma during and after surgery may be precursors of an ectatic condition, others may represent non-progressive changes associated with the establishment of a new postoperative structural state.8

The biomechanical impact of flap creation on the residual stroma likely plays a critical role in the development of ectasia. Biomechanical effects may also be important in explaining changes in the curvature of the residual stroma after flap creation and photoablation that do not represent ectasia but nonetheless affect refractive outcome. It is known that flap thickness can vary significantly with some mechanical microkeratomes, with standard deviations of 30 μm having been reported depending on the microkeratome used.9 The predictability of this process has a potential for compromising corneal stability in the long term as thicker flaps could more significantly modify the biomechanical integrity of the cornea.10 In this study, we used the femtosecond laser to create flaps at two different depths and measured the impact of programmed flap thickness on the biomechanical properties of the underlying residual stroma.

Six pairs of non-scalded porcine globes were obtained from a local supplier and formed two groups with 3 right and 3 left eyes in each. A heavy-duty tripod with a custom eye holder was utilized to assure the eyes maintained the same position during preoperative and postoperative measurements. Each eye underwent the following measurements before flap creation: raster photograph topography (PAR Vision Systems Corporation, New Hartford, NY, USA); four replicate measurements with the ocular response analyzer (ORA; Reichert Ophthalmic Instruments, Buffalo, NY, USA) to analyze corneal hysteresis (CH), corneal resistance factor (CRF), corneal-compensated intraocular pressure (IOPcc) and Goldmann-correlated intraocular pressure (IOPg); optical coherence tomography (Visante OCT; Carl Zeiss Meditec, Jena, Germany) to measure corneal pachymetry and flap thickness; and surface wave velocity to estimate corneal stiffness. The last was measured with a prototype system (Sonic Eye; Pria Vision Inc., Menlo Park, CA, USA) described elsewhere11 that determines the propagation velocity of a sonic wave between two transducers positioned 4.5 mm apart on the corneal surface. The probe produces a 4-5 kHz oscillatory force with an acoustic energy of <10 microwatts and duration of approximately 1 ms, and the time required for the transmitted wave to reach threshold amplitude at the receiver is recorded. A software interface converts time-of-flight data to velocity in meters per second (m/s), which is related to the elastic modulus, and thus the stiffness of the sampled corneal tissue is evaluated. Six positions were measured (two perpendicular central points and four positions in the periphery of the cornea 90° apart) to capture any regional difference in the biomechanical effects of flap creation (Figure 1). Intraocular pressure was controlled throughout the experiment with a 23-gauge needle (BD, Franklin Lakes, NJ, USA) positioned in the vitreous chamber delivering balanced salt solution (Alcon Laboratories, Inc., Fort Worth, TX, USA), and IOP was measured with an in-line pressure transducer (Biotrans 2; Biosensor International Inc., Singapore) mounted at the level of the globe and connected to a calibrated and zeroed digital pressure monitor (Infinity SC9000XL; Drager Medical, Lubeck, Germany). 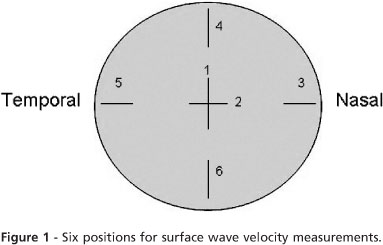 A 60 kHz model II femtosecond laser (fs60; IntraLase Corporation, Irvine, CA, USA) and the supplied applanating lens were used to generate flaps programmed for 100 or 300 μm depths and 8.0 mm diameters with 55° side-cut and hinge angle and 8 μm spot and line separation. Energy levels per pulse were set to 2 μJ for the side and lamellar cuts. The flaps were lifted and replaced, and the preoperative measurements were repeated to compare changes in corneal hysteresis, simulated average keratometry and sonic wave propagation between the thin and thick flap groups. After this, flaps were amputated and new surface wave velocity measurements were taken again.

Statistical analysis was performed with SigmaPlot software 3.5 (Systat Software Inc.). Student t-tests and ANOVA with Bonferroni adjustment for multiple comparisons were applied with an alpha error of 0.05.

Regarding surface wave velocity analysis, some positions showed lower results after surgical procedures. Position 1 showed a lower result after flap amputation (measurement performed over the underlying residual stroma) compared with the post flap creation measurement (measurement performed over the top of the flap) in the thin flap group (from 130.8 + 11.8 m/s to 88.4 + 4.8 m/s, p = 0.01). Position 6 also presented lower values after flap creation for the thick flap group compared with the preoperative measurement (from 103.2+ 6.9 m/s to 56.3+ 5.7 m/s, p= 0.001). Other positions did not show a statistical difference related to surface wave velocity after surgical procedures.

CH is thought to be a measure of viscous damping in the corneal tissue, or the energy absorption capability of the cornea, whereas CRF is a measure of the combined viscous damping and elastic resistance behaviors of the cornea.12,13 The biomechanical impact of flap thickness on CH and CRF may be important in better understanding the pathophysiology of ectasia, one of the most vision-threatening complications encountered after refractive surgery. In this series of porcine experiments, corneas that had thicker flaps showed significant decreases in CH and CRF that were not observed with thinner flaps. CRF was higher preoperatively for the thick flap group, which highlights the effect of flap creation on these corneas.

Also, thicker flaps induced a steepening that may be related to the more pronounced structural effect of a deeper lamellar insult. Thin flaps caused less acute changes in corneal shape and biomechanical properties and might, in general, be less prone to unexpectedly affecting postoperative refractive outcome or contributing to the generation or exacerbation of ectasia.14 We also demonstrate here that surface wave velocity was reduced after flap creation and amputation (measurements performed at the top of the flap and in the underlying residual stroma respectively) and can be equated with a lower stiffness of the cornea after surgical procedures. Collagen fiber relaxation after a corneal cut may be involved in this feature because this event can reduce the capacity of the sonic wave to propagate in the corneal surface.

Refractive surgeons are actively seeking preoperative indicators that can be used to discern ectasia risk prior to performing LASIK and other procedures. Furthermore, there has been a trend to return to surface ablation techniques such as photorefractive keratectomy and LASEK (laser-assisted subepithelial keratectomy) as they involve less stromal disruption than LASIK and would thus seem to present a lower risk of corneal biomechanical instability, although the patients have more pain and slower visual recovery. Sub-Bowman's keratomileusis may be an alternative procedure that offers the combined advantages of LASIK and photorefractive keratectomy as it may provide biomechanical stability, associating the safety of photore-fractive keratectomy with the visual results and reduced pain experience of LASIK. In addition, femtosecond laser is able to create a customized corneal flap of between 90 and 110 mm with a diameter based on the requirements of the individual patient and the type of excimer laser with high precision, thus saving corneal tissue. The diameter can be precisely controlled by the surgeon15 and is not dependent on corneal anatomy. Moreover, the decrease in hysteresis seems to be more predictable after LASIK with the femtosecond laser compared with a mechanical microkeratome.16

This study has some limitations. A loose flap or a bad flap apposition can dampen the ORA or the surface wave velocity signal. Also, 100 and 300 μm in a porcine globe are smaller percentages of total corneal thickness than in human eyes, and the magnitudes of changes seen in the porcine model should not be directly extrapolated to the human case. Similarly, the topographic steepening observed after thicker flap creation in pig eyes is difficult to compare directly with the human case because of differences in the biomechanical makeup of the cornea between the two species. Human and porcine corneas have differences with regard to mechanical anisotropy; Kampmeier et al.17 found that porcine corneas are stiffer along the inferior-superior axis than the nasal-temporal axis. Thus, these differences can influence the biomechanical changes after corneal surgical procedures.

This experiment has demonstrated that thick LASIK flaps represent a more profound biomechanical insult than much thinner flaps. Clinical studies should be conducted in order to analyze the relationship between thin and thicker LASIK flaps and the risk of ectasia development.