PURPOSE: To evaluate the oncological outcome of patients with grade I chondrosarcomas according to the type of surgical treatment performed, since there is still controversy regarding the need for aggressive resections to reach a successful outcome. MATERIALS AND METHODS: The records of 23 patients with grade I chondrosarcomas were reviewed. The mean age was 38.4 years, ranging from 11 to 70 years; 52% were men and 48% were women. The femur was the site of 13 tumors. The tumors were staged as IA (17, 74%) and IB (6, 26%). Regarding tumor location, 74% (17) were medullary, 22% (5) were peripheral, and 4% (1) was indeterminate. Tumor size ranged from 2 to 25 cm, mean 7.9 cm. Regarding the surgical procedure, 11 patients underwent intralesional resection, 9 patients underwent wide resection, and 3 underwent radical resection. The follow-up period ranged from 24 to 192 months. RESULTS: None of the patients developed local recurrence or metastases; 7 patients had other general complications. CONCLUSIONS: This data supports the use of less aggressive procedures for treatment of low-grade chondrosarcomas.

PURPOSE: To evaluate the oncological outcome of patients with grade I chondrosarcomas according to the type of surgical treatment performed, since there is still controversy regarding the need for aggressive resections to reach a successful outcome.

RESULTS: None of the patients developed local recurrence or metastases; 7 patients had other general complications.

CONCLUSIONS: This data supports the use of less aggressive procedures for treatment of low-grade chondrosarcomas.

A relationship between the prognosis and the histological grading and surgical treatment of chondrosarcomas has been identified.3, 4 Surgery is the only effective method for treatment of chondrosarcomas since these tumors do not respond to radiotherapy or chemotherapy. Grade I tumors have a better prognosis than grades II and III, with a lower incidence of metastases.5,6

The presence of local recurrence and the type of surgical treatment have been correlated. Some authors do not recommend less aggressive surgical treatment because of the greater incidence of local recurrence.5,7-9 However, intralesional resection with the use of a local adjuvant (such as methyl-methacrylate) has been applied with good results in the treatment of aggressive borderline benign tumors such giant cell tumors of the bone. The same technique has been used in grade I chondrosarcomas in some situations.10-12

The purpose of this study was to evaluate the oncological outcomes of patients with classic grade I chondrosarcomas compared to the type of surgery performed in order to evaluate the safety of the less aggressive procedures.

A restrospective analysis was performed on 39 patients with grade I chondrosarcomas as confirmed by histology. The histological analysis was reviewed by a pathologist experienced in bone pathology. Only patients with at least 24 months of postoperative follow-up (23) were included. Eleven patients were women and 12 were men. Patients' ages ranged from 11 to 70 years of age, mean age 38.4 years.

All tumors were surgically removed. Radiographs of the tumor site and thorax were performed on all patients in the follow-up period. The patients were followed up every 3 months during the first year, every 6 months during the second to fifth years, and every 12 months for up to 10 years after 5 years.

Tumors were staged by the method described by Enneking et al.13 and accepted by the Musculoskeletal Tumor Society (MSTS). Tumors were also classified as medullary, peripheral, or indeterminate. The largest diameter of the tumor was determined for the evaluation of prognosis.

The oncological analysis was based on the presence of local recurrences, metastases, or death related to the tumor. It was classified as:

The surgical procedures were divided into two groups: intralesional resections and wide/radical resections. The oncological results were compared between the two groups. The Fisher exact test and the Mann-Whitney test were used and the level of significance adopted was 5%.

The most common location of the chondrosarcoma was the femur (39%).

All 23 patients were alive with no evidence of disease at the last follow-up. No patient needed resection of metastases or local recurrence during the follow-up period.

When Lichtenstein et al.14 established the criteria for differentiating benign from malignant cartilaginous tumors, they made it possible to grade chondrosarcomas and define the prognosis of each histological type. Depending on the histological typeI, II, or IIIthe surgical strategy will differ. However, prognostic analysis using histology type of chondrosarcomas is not adequate due to the distinct behavior and aggressiveness of each type, which may lead to erroneous results. Any study of chondrosarcomas should differentiate grade I lesions, which have a good prognosis.

However, the differentiation of each tumor grade is not an easy task. When biopsies are performed on chondrosarcomas, a correct diagnosis is reached in 96% of the cases, but the correct tumor grade only occurs in 46% of cases.15 Therefore, it is unsafe to use histology alone to plan treatment for patients with chondrosarcomas.15 The tumor must be considered malignant if the radiographic findings point to this, even when histology indicates otherwise.16 Clinical, radiographic, and histologic evaluations must be used together to define the tumor grade.8,10 The incisional biopsy is not necessary in all cases, but it should be performed when diagnosis is in doubt.

Neither has a relationship of tumor size to survival been clearly established. Lower survival rates in 113 patients with pelvic or proximal femoral chondrosarcomas larger than 13 cm17 and in patients with tumors larger than 10 cm6,18 have been reported. However, in a study of pelvic chondrosarcomas, tumor size did not influence the occurrence of metastases.19 In another study of grade I chondrosarcomas with lesion sizes ranging from 1 to 40 cm, there were 3 local recurrences in tumors smaller than 10 cm. In the present study, tumor size was evaluated by measuring the largest diameter of the lesion, which is the current procedure.10,17-19 Tumor size did not influence patient prognosis, and no local recurrences occurred in spite of the size ranging from 2 to 25 cm.

Chondrosarcomas have a poor response to radiotherapy and chemotherapy. This may be explained by the fact that its growth is mainly due to matrix production and not so much to DNA replication.8 This is probably one of the reasons why surgery is the treatment of choice and the type of resection is a determining factor in prognosis.6,8,9,18,21

The good oncological result obtained in this series of patients undergoing intralesional resections shows that this is a valid form of treatment for medullary grade I chondrosarcomas, as has been demonstrated by other authors.12,26 In this series, 3 patients were treated only with curettage without the use of adjuvant therapy and did not experience recurrence after 24, 35, and 37 months of follow-up. These good outcomes brings into question the malignant nature of these lesions, similarly to the reported series of 23 patients undergoing intralesional resection with only 2 recurrences.10

An important issue is whether the functional results obtained through intralesional resection justify its use in cases of grade 1 chondrosarcomas, especially in regions frequently involved, such as the distal femur and proximal humerus, in which wide resections and placement of endoprosthesis seem too aggressive. Bauer et al.10 conclude that the more aggressive procedure results in considerable morbidity and therefore should only be performed in tumors with a higher risk of local recurrence or metastases, which is not the case in grade I chondrosarcomas.

The most frequent complication was fracture. In spite of the fact that the fractures occurred in the distal femur, the correlation between fracture and location was not significant, since the distal femur was also the most frequent site of the tumor. Also the complication rates did not differ between group receiving intralesional resections and that receiving wide/radical resections.

There was a tendency towards better functional results with the intralesional resections, possibly because the procedure is less aggressive with greater preservation of the adjacent tissue. However this relationship could not be proven because of the small number of patients who had tumors located in many different locations, making the function analysis impossible.

Good results, as described in this series, require the elimination of tumor cells in the region adjacent to the tumor, which is accomplished by resection of the tumor margins, but by a simple inadequate intralesional resection. Our findings indicate that less aggressive procedures, such as intralesional resections with local adjuvants, can be safe for treatment of low-grade medullary grade I chondrossarcomas and may be the method of choice in non-expendable bones. The medullary chondrosarcomas located in expendable bones such as the proximal fibula, iliac wing, and clavicle can be resected in block. The same technique is indicated for peripheral grade I chondrosarcomas. A longer follow up and a meta-analysis including many papers probably will confirm that the in-block resections are not the best treatment of grade I medullary chondrosarcomas in non-expendable bones. 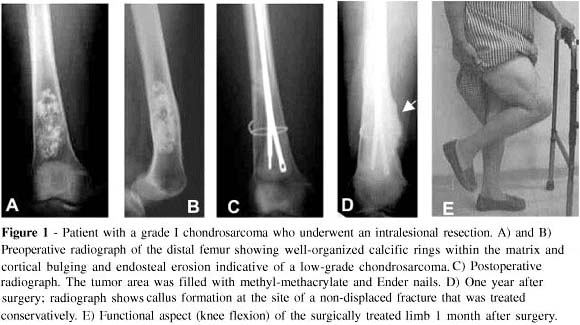