OBJECTIVE: The aim of this study was to evaluate the action of the conjugated equine estrogens and tamoxifen on the morphology of thyroid gland in ovariectomized (OVx) rats. METHODS: Conjugated equine estrogens (CEE), clinically used as estrogen therapy, is a complex formulation containing multiple estrogens that decrease menopausal symptoms. Thirty ovariectomized rats were randomly divided into 3 treatment groups: GI, vehicle (propylene glycol); GII, CEE 200 µg/kg per day; and GIII, tamoxifen 1 mg/kg per day. Another group of 10 rats with intact ovaries (GIV) was included, treated with the vehicle, and sacrificed during estrous. All animals were treated by gavage for 50 days, after which they were sacrificed. Blood samples were collected, and the thyroid was removed for morphological analysis and PCNA evaluation through immunohistochemical study. RESULTS: The thyroid follicular cell height was increased in animals treated with CEE (14.90 ± 0.20 µm), with TAM (14.90 ± 0.10 µm), and in rats with intact ovaries (15.10 ± 0.50 µm) in comparison to that of the vehicle group (9.90 ± 0.20 µm) (P < 0.001). The follicular area was larger in the CEE (2,225 ± 51 µm²) and TAM (2,127 ± 67 µm²) groups compared to that of the vehicle group (5,016 ± 53 µm²). The levels of T4 and T3 in rats treated with CEE, with Tamoxifen and in rats with intact ovaries, were higher than those those in the vehicle group (P < 0.001). The PCNA index in the vehicle group was lower than in other groups. CONCLUSION: Our data suggest that estrogen and tamoxifen administration has a proliferative effect on the thyroid.

OBJECTIVE: The aim of this study was to evaluate the action of the conjugated equine estrogens and tamoxifen on the morphology of thyroid gland in ovariectomized (OVx) rats.

METHODS: Conjugated equine estrogens (CEE), clinically used as estrogen therapy, is a complex formulation containing multiple estrogens that decrease menopausal symptoms. Thirty ovariectomized rats were randomly divided into 3 treatment groups: GI, vehicle (propylene glycol); GII, CEE 200 µg/kg per day; and GIII, tamoxifen 1 mg/kg per day. Another group of 10 rats with intact ovaries (GIV) was included, treated with the vehicle, and sacrificed during estrous. All animals were treated by gavage for 50 days, after which they were sacrificed. Blood samples were collected, and the thyroid was removed for morphological analysis and PCNA evaluation through immunohistochemical study.

CONCLUSION: Our data suggest that estrogen and tamoxifen administration has a proliferative effect on the thyroid.

There is a great wealth of published data on the value of estrogen therapy in alleviating menopausal symptoms, such as hot flashes and insomnia, and in preventing chronic problems, including urogenital atrophy and osteoporosis.1,2. Although some studies have demonstrated influences of estrogens on the development, physiology, and pathology of the thyroid gland, questions about the effects of estrogen replacement therapy on the thyroid gland remain unanswered3,6. Additionally, thyroid diseases are more common in women.7 Conjugated equine estrogens (CEE), clinically used as estrogen therapy, is a complex formulation (obtained from pregnant mares' urine) containing multiple estrogens, including several not secreted by human ovaries, as well as other biologically active steroids. These hormones stimulate the proliferation of tissue with estrogen receptors.8

Hypothyroid women who are under treatment with thyroxine (T4) are reported to experience changes in the circulating levels of T4 and TSH upon starting estrogen replacement therapy. In fact, under these conditions, there are increased titers of thyroxine-binding globulin leading to an enhanced fraction of bound thyroxine and, consequently, a feedback-driven increase of TSH levels. Since the adaptation is somewhat insufficient, there is an increased need for thyroxine in these women taking hormone replacement therapy.4

In addition, some experimental studies have shown that estrogens might up-regulate their own receptors in the thyroid and thereby influence the growth of the gland and the proliferation of thyrocytes.5,9

Tamoxifen is a selective estrogen receptor modulator (SERM) with either estrogen agonistic or antagonistic activities, depending upon the particular target organ. It is a valuable therapeutic agent, with applications in the treatment and prevention of estrogen-responsive breast cancer.10 The efficacy of tamoxifen in preventing recurrence and fatalities from breast cancer when used as an adjuvant treatment has been well-established.10 Additionally, the recent introduction of SERMs may further increase the safety of hormone replacement therapy, but the effects of these drugs on the thyroid gland morphology are not fully understood. Therefore, the aim of this study was to study the effects of tamoxifen and estrogens on thyroid gland morphology of ovariectomized rats.

All procedures involving rats were approved by the Federal University of São Paulo Research Ethics Committee; animal handling conformed to the APS Guiding Principles for The Care and Use of Animals. Adult female (3 months) Wistar rats (180-210 g body weight) were kept under a 14:10 h light:dark cycle (lights on at 08:00 am) at 23°C and were fed a standard diet and tap water ad libitum. Thirty animals were bilaterally ovariectomized (OVx). One month later, the rats were randomly divided into 3 treatment groups: GI, vehicle (propylene glycol); GII, conjugated equine estrogens (CEE) 200 µg/kg per day; and GIII, tamoxifen 1 mg/kg per day. Another group of 10 rats with intact ovaries and treated with vehicle (GIV) was included from which vaginal smears were daily collected for identifying the phase of estrous cycle. All animals were treated once a day by oral route (gavage) for 50 consecutive days. Then, the rats were weighed and sacrificed by decapitation, trunk blood was collected and centrifuged. Serum was separated and stored at 20ºC until assay for hormone level determinations. The animals in GIV were sacrificed only during estrous. Thyroid glands were carefully dissected out, weighed, and immediately fixed in Bouin's solution for 24 hours. Every fixed gland was dehydrated in graded alcohol, embedded in paraffin, sectioned at 4 µm, and stained with hematoxylin and eosin for light microscopic analysis. A section of the central portion of every lobe was selected for analysis.11 For determination of the thyroid follicular cell proliferation index, the sections were immunohistochemically stained with anti-proliferating cell nuclear antigen (PCNA) antibody PC-10 (Dako, Denmark). The PCNA-positive nuclei (PCNA-labeling index) in 1,000 cells of the follicular epithelium were counted and expressed as percentages of the total cell count.

The morphometric measurements were performed using digitalized images obtained directly from the light microscope via a video camera and stored on magnetic media. Measurements were automatically processed using Imagelab Softium® software (São Paulo, Brazil). For each sample, the areas (follicular and colloidal) from 200 follicles and the height of 4 cells per follicle (400 per sample) were measured at a magnification of 400x. Two different observers independently evaluated the images, with similar resutls. Both of them were blind to the analyzed groups.

Data from morphometry and hormone level determinations are given as mean ± standard error of the mean (SEM); the results were analyzed using 1-way ANOVA followed by the Newmann-Keuls multiple comparison test, with the level of significance set at P < 0.05.

Under light microscopy, in the control ovariectomized group (GI, treated with propylene glycol), the thyroid gland had a thin connective tissue capsule around it. Also, fine septa emerging from the capsule divided the gland into numerous small ill-defined lobules with large and distended follicles, which in turn were often lined by cuboidal epithelium. The colloid deposited therein appeared heavily stained and often filled up the entire lumen without conspicuous peripheral vacuoles (Fig. 1). The luminal surface of the follicular cells was flattened. In addition, each follicle was surrounded by a delicate network of reticular fibres and blood capillaries.

Tamoxifen is a triphenylethylene derivative commonly used in the treatment of breast cancer.15-18 This drug is known to have various biological effects ranging from complete estrogen antagonism to pure estrogen agonism, depending upon its concentration, the sex of the animal, and the target organ.15,19,20

In humans and rats, tamoxifen is predominantly antiestrogenic with residual estrogenic activities,15 except in the uterus21 and thyroid gland, as demonstrated in this study.

In fact, the results of the present investigation showed that the thyroid gland was significantly affected by treatment with estrogen or tamoxifen, showing an increased follicular cell height and decreased follicular and colloidal areas as compared to controls. Also, the PCNA index was increased in treated groups compared to the vehicle-treated group. These histological features were generally correlated to the thyroidal functional status,22 since the serum T3 and T4 levels were enhanced in animals treated with estrogen or tamoxifen as compared to the vehicle-treated controls.

The effects of estrogens and tamoxifen on thyroid gland have been the subject of many investigations, but several aspects of these effects are still unknown. The presence of estrogen receptors in the thyroid suggests a direct action of estrogens and estrogenic-stimulating drugs on the gland.23-25 Also, some experiments using thyrocytes in vitro have demonstrated that estrogen has a definite role in the proliferation of these cells.5,6,26,27

However, some studies have shown that the effects of estrogen and tamoxifen on thyroid gland may be rather indirect, as a consequence of increased serum levels of thyroxine-binding globulin (TBG) and the associated changes in thyroid function.28-31 Other data suggests that the action of these drugs may be directly on the pituitary through the release of TSH.32-35 Donda et al13 showed that estrogen had a stimulatory effect on pituitary function and release of TSH. However, in our study, an increase in TSH levels was detected after oophorectomy compared to that in the estrous phase and treated groups. One explanation may be the negative feedback of T3 and T4 hormones on TSH release after the hormonal treatment.36 In addition, another study showed that estrogen may interact with TSH and thus play a role in thyroid function; conversely, sex steroids may in turn modulate TSH-induced cell proliferation.37

As a matter of fact, estradiol administration to female rats is able to reduce the TSH levels.33 Also, another report using pituitary cells in vitro suggested that estradiol was physiologically important in maintaining normal responses to thyrotropin-releasing hormone (TRH) in female rats.38

Regardless of the mechanism, our data suggest that tamoxifen may be an agonist to estrogen receptors in the rat thyroid leading to proliferation of thyrocytes and increasing T3 and T4 levels. Although the extrapolation of these results to humans should be interpreted with caution, it is highly conceivable that the monitoring of thyroid function may be important for those patients who are or are going to be under estrogen or tamoxifen therapy.

Received for publication on January 27, 2006 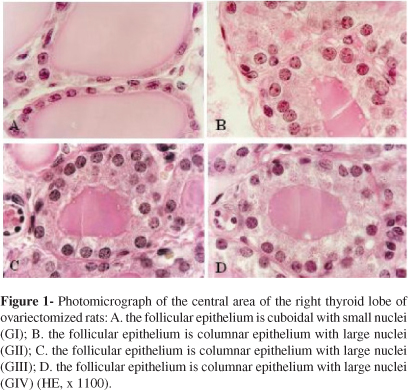 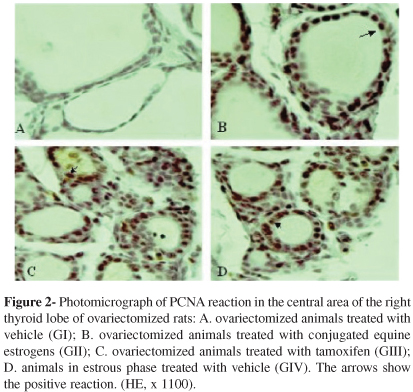