Relationship between the morphogenesis of Italian ryegrass cv. 'BRS Ponteio' with forage and seed production

This study aims to verify, accurate and precisely, the responses of Italian ryegrass 'BRS Ponteio' cultivar to different frequencies of defoliation for forage production and especially for seed production. For this purpose, a randomized block design experiment with four replications was conducted. Four frequencies of defoliation were applied (zero, one, two, and three) based on the thermal sum, evaluating the rate of leaf appearance (LAR), phyllochron (P), leaf expansion rate (LER), leaf senescence rate (LSR), stems expansion rate (SER), tillering rate (TR), leaf life span (LL), forage production, proportion of leaf blades, stems plus sheaths, senescent material, and inflorescences, as well as seed production. Second defoliation noticeably altered the morphogenic plant responses, reduced expansion rates and leaf appearance, increased rates of tillering and stems expansion. This phenotypic maintained a high seed production and provided a harvest of forage mass 100% higher than the collected mass in the first cutting. Third defoliation led to an increase of 100% of the harvested forage mass; however, it caused drastic and negative changes in the morphogenic characteristics and seed yielding.

Development of Brazilian cattle industry depends on the understanding of physiological ecology of forage plants as a base to set an appropriate pasture management (Da SILVA & NASCIMENTO JUNIOR, 2007DA SILVA, S.C.; NASCIMENTO JÚNIOR, D. Avanços na pesquisa com plantas forrageiras tropicais em pastagens: características morfofisiológicas e manejo do pastejo. Revista Brasilera de Zootecnia, v.36, suppl.0, p.121-138, 2007. Available from: <http://www.scielo.br/scielo.php?pid=S1516-35982007001000014&script=sci_arttext>. Accessed: out. 11, 2011. doi: 10.1590/S1516-35982007001000014.
http://www.scielo.br/scielo.php?pid=S151... ). A careful control of time, frequency and intensity of defoliation of the tillers of Italian ryegrass in seed production fields can be crucial to succeed in this production system. On the other hand, the frequency of defoliation at field level is mostly determined from the Julian calendar. Although it is a very practical application technique, sometimes it results in low levels of fodder and seeds production. Significant errors occur due to not measured sources of variation such, as, for example, climate variations and phenological cycle. Although there are studies regarding the detailed management of defoliation for Italian ryegrass forage production, in a morphogenic level, most studies refer to the common cultivar, which may have important genetic and phenotypic variations. The BRS Ponteio cultivar, recently released, has genetic and phenotypic characteristics well defined in southern Brazil. In spite of the short time since its release, it has a major significance in the southern Brazilian market. Thus, this study aims to verify, accurately and in details, the responses of this cultivar to different frequencies of defoliation for the production of fodder and seeds.

The experiment was conducted in an experimental area located in Capão do Leão-RS (31°80'00"S and 52°40'00"W, 13m above sea level). It belongs to the Empresa Brasileira de Pesquisa Agropecuária - Embrapa Clima Temperado/Estação Terras Baixas. The experiment was held on 04/29/2011, using the Italian ryegrass BRS Ponteio cultivar. The sowing was done in lines, using a direct sowing machine -Semina3 model. The seeding rate was 25kgha-1 of viable, pure seed spaced 20cm. The experimental soil area was classified as planosol eutric and submitted to conventional tillage (plowing and disking). Soil analysis was performed to correct the acidity and base fertilization. Urea was used (45% nitrogen) as nitrogen fertilization in coverage, split in two applications. The first (50kgha-1 of nitrogen) was held on 06/06/2011, marked by the tillering beginning. The second (60kgha-1 nitrogen) was held on 09/23/2011, due to temperature and soil moisture, favorable to growth and development of forage grass. The experimental area of 1536m2 was composed by 16 parts of 88m2 each, with paths 2m width between the two groups of 8 lots each. The experiment included four treatments, arranged in randomized blocks. In order to evaluate the defoliation frequency factor, the following treatments were used: D0 = no defoliation. D1 = one defoliation, performed when the forage mass reached about 1500kgDMha-1and the plants had an average height of 15cm and a thermal sum of 864 degree-day, on 08/08/2011. D2 = two defoliation, performed with a thermal sum of 420 degree-day, after the first defoliation, when the plants reached about 20cm, on 09/23/2011. D3 = three defoliation performed with a thermal accumulation of 357 degree-day, after the second, when the plants were about 35cm high, on 10/21/2011. In the post- defoliation condition, the plants were kept at the half-height that they reached in the pre-defoliation condition. So, the plants height, in the post-defoliation condition were 7, 10 and 15cm for the first, second and third defoliation, respectively. Those conditions were maintained, so that there was an appropriate mass of green leaves after defoliation to favor regrowth. At 45 days after sowing, it was evaluated the morphogenetic characteristics with technique "marked tillers), detailed by CARRÈRE et al. (1997CARRÈRE, P. et al. Tissue turnover within grass-clover mixed swards grazed by sheep. Methodology for calculating growth, senescence and intake fluxes. Journal of Applied Ecology, v.34, p.333-348, 1997. Available from: <http://www.jstor.org/stable/2404880?seq=1#page_scan_ tab_contents>. Accessed: out. 23, 2010. doi: 10.2307/2404880.
http://www.jstor.org/stable/2404880?seq=... ). Calculation of daily heat accumulation was performed by using the equation: [(tºMx+tºMn)/2]-5; tºMx= maximum temperature, tºMn= minimum temperature and 5°C = the base temperature (Tb) for Italian ryegrass (CONFORTIN et al., 2010CONFORTIN, A.C.C. et al. Morphogenesis and structure of Italian ryegrass submitted to three grazing intensities. Acta Scientiarum: Animal Sciences, v.32, p.385-391, 2010. Available from: <http://periodicos.uem.br/ojs/index.php/ActaSciAnimSci/article/view/8657>. Accessed: 12. jun, 2011. doi: 10.4025/actascianimsci.v32i4.8657.
http://periodicos.uem.br/ojs/index.php/A... ). Meteorological data observed in the trial were collected at the Meteorological Station of the Federal University of Pelotas, located next to the experimental area.The forage harvesting was obtained from two samples of 0,1m2lot-1, keeping the forage mass described above for each defoliation. Samples were dried in a forced-air oven at 60°C for 72 hours, and the results were converted to dry matter kg(DM)ha-1. When the seeds reached between 30 and 35% moisture, the harvesting from eight samples per lot (0,25m2 each sample), close to the ground, was performed. The first 12 hours drying was done in the shade on covered concrete floor. Drying was completed in a forced air circulation (30ºC) oven. All the drying process was done with the seeds still in the spikelets. Samples were taken to the Laboratório de Sementes Forrageiras no Departamento de Fitotecnia da Faculdade de Agronomia Eliseu Maciel (UFPel), where they were manually threshed and fractionated using sieves.The experimental design was a randomized block with four replications. Analysis of the variance of the data and comparison of means by the Scott-Knott test at 5% of probability was performed. The statistical program used was the SASM-Agri (CANTERI et al., 2001CANTERI, M.G. et al. SASM-AGRI: system for analysis and mean separation in agricultural assays using Scott-Knott, Tuney and Duncan methods. Revista Brasileira de Agrocomputação, v.1, n.2, p.18-24, 2001. Available from: <http://www.agrocomputacao.deinfo.uepg.br/dezembro_2001/Arquivos/RBAC_Artigo_03.pdf>. Accessed: feb. 14, 2011.
http://www.agrocomputacao.deinfo.uepg.br... ). The data were also submitted to polynomial regression analysis to describe the variable as a function of time with the same level of significance cited above. Implementation of the polynomial regression statistical analysis used the "Statistical Analysis System for Windows - Winstat" Version 1.0 (MACHADO & CONCEIÇÃO, 2003MACHADO, A.A.; CONCEIÇÃO, A.R. Winstat: sistema de análise estatística para Windows. Pelotas: UFPel/NIA, 2003. Versão 2.0. Available from: <http://www.galileu.esalq.usp.br/vref. php?cod=12>. Accessed: mar. 20, 2012.
http://www.galileu.esalq.usp.br/vref. ph... ).

The longest leaf lifespan (LL) was measured at 50 days (thermal time= 510 degree-days) after the sowing (Figure 1a). At that point the leaf senescence rate (LSR) became significant (Figure 2a). Defoliation could have been done at that time, to avoid losses by senescence. However, it was not possible because the pasture was not able yet, and the plants were not well rooted and the leaf cover was insufficient.The 'BRS Ponteio' showed appropriate conditions to defoliation at 101 days (thermal time= 864 degree-days) after sowing, when the pasture was 15cm tall. From day 50 to day 101 there was intense senescence, with a slope similar to the leaf expansion rate (LER) as a function of time, as it is in figure 2a. High senescence can be explained by the high levels of precipitation and low level evaporation. These are remarkably events in planosol, due to the long period the plant remained under water stress, because of saturated soil and water blade (MAIA & PRIMO, 1995MAIA, M.S.; PRIMO, A.T. Cadeia forrageira para a região sul. In: FEDERACITE (Org.). Cadeias forrageiras regionais. Porto Alegre: Caramuru, 1995, p.106-132. Available from: <http://www.scielo.br/scielo.php?script=sci_nlinks&ref=000146&pid=S0101-312220080002000 1300017&lng=pt>. Acessed: out. 12, 2011.
http://www.scielo.br/scielo.php?script=s... ). Low levels of organic matter and clay verified in planosol, especially in the one where this experiment was conducted (1.4 and 18% organic matter and clay, respectively), allow a better understanding of the long gap between the sowing and first use of the pasture.

Soon after the first cut, lower rates in expansion (LER) and leaf appearance (LAR) in relation to plants in free growing (Figure 2a and 3b, respectively) were verified. However, the quadratic models after the first defoliation, for those two variables showed rapid increasing in rates. The amounts were similar to the ones found in not cut plants, probably by conditions of temperature; precipitation and evaporation were more favorable to the culture compared to prior periods. Those best environmental conditions were also, probably important to determine the increase of the leaf life span (LL) and a significant reduction of the senescence after cutting (Figure 1a and 2a, respectively). Both models became linear with intercept quite distant from the values, checked at the same time, for free growing plants. The beginning of the internodes elongation (stem expansion rate - SER) was essential for the second cut (pre-defoliation= 20cm; after defoliation= 10cm): 46 days or 420DD after the first. Thus, the forage harvested mass was superior to the first cut, especially due to the higher weight of the stem compared with the leaf. However, because of the reduced stem growth rate - only 49% of the maximum rate found during the culture cycle, the leaves predominated in relation to the stems, in the harvested forage. Plants in free growth showed significant elongation of the internodes only 140 days after sowing, as seen in figure 2a. Keeping the pasture without defoliation showed a disadvantage, especially excessive leaf senescence. Although, the leaf expansion rate still remained close to the maximum point, indicating the possibility of high-performance forage harvesting in a single cut. It is commonly used for the preparation of hay but could adversely affect seed yield. According to MEDEIROS & NABINGER (2001MEDEIROS, R.B.; NABINGER, C. Rendimento de sementes e forragem de azevém-anual em resposta a doses de nitrogênio e regimes de desfolha. Revista Brasileira de Sementes, v.23, n.2, p.245-254, 2001. Available from: <https://scholar.google.com.br/scholar?q=related:VTAJ1g7SAt4J:scholar.google.com/&hl=pt-BR&as_sdt=0,5>. Accessed: out. 21, 2012.
https://scholar.google.com.br/scholar?q=... ), severe cuts reduce the photosynthetic potential of the plants, therefore reducing the seed yielding.

Performing one defoliation does not change the morphogenesis of the Italian ryegrass 'BRS Ponteio' cultivar along its production cycle. Two harvests allows forage production without compromising seed yeld but three defoliations reduce it. 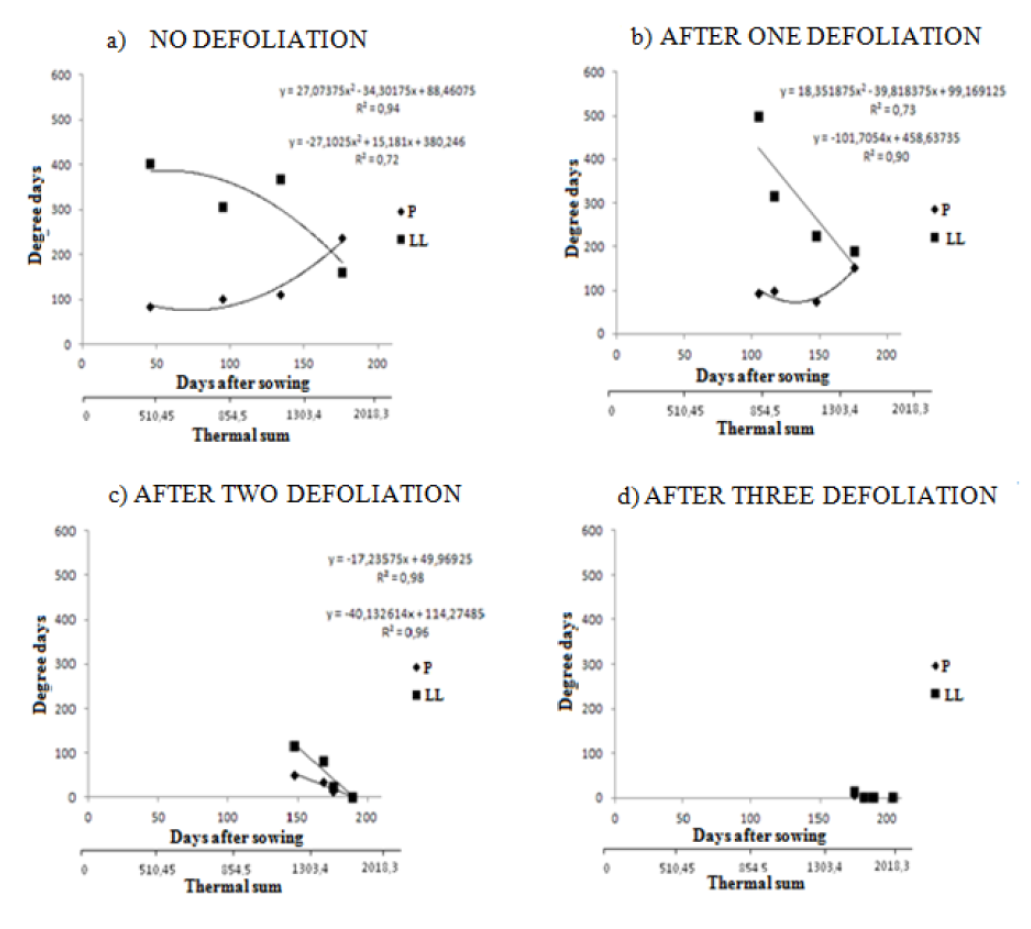 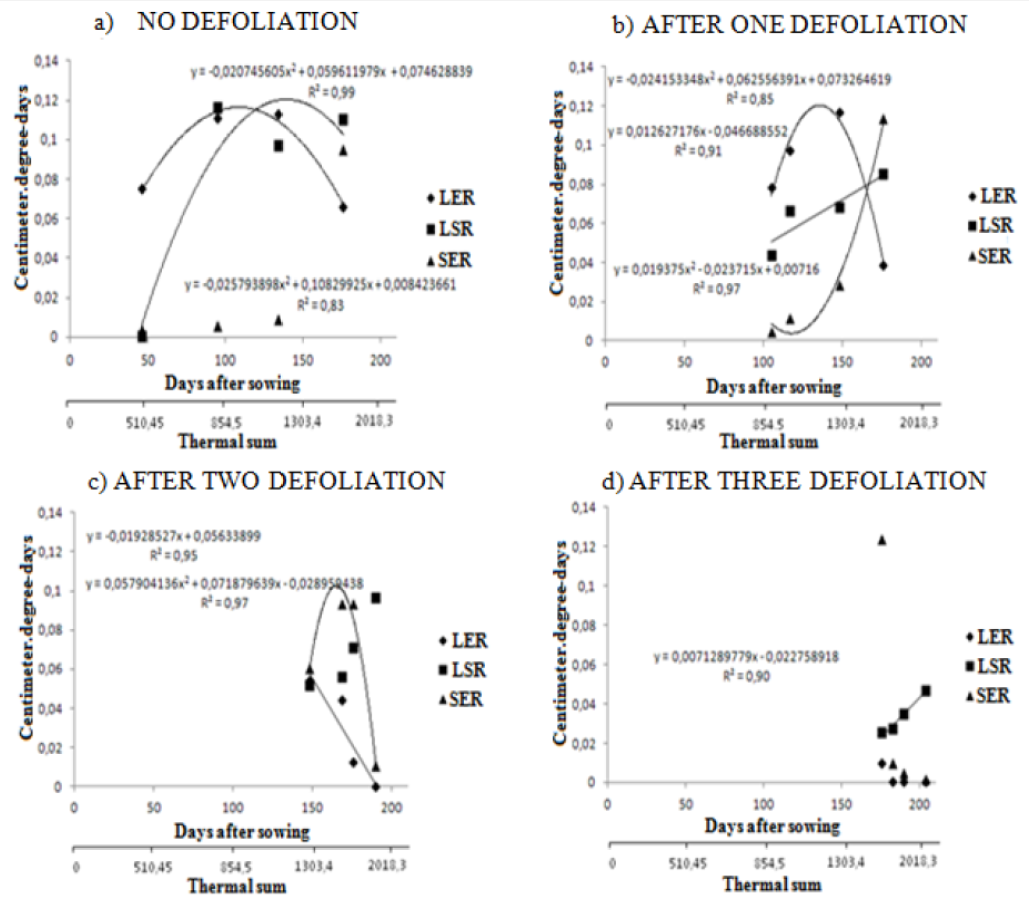 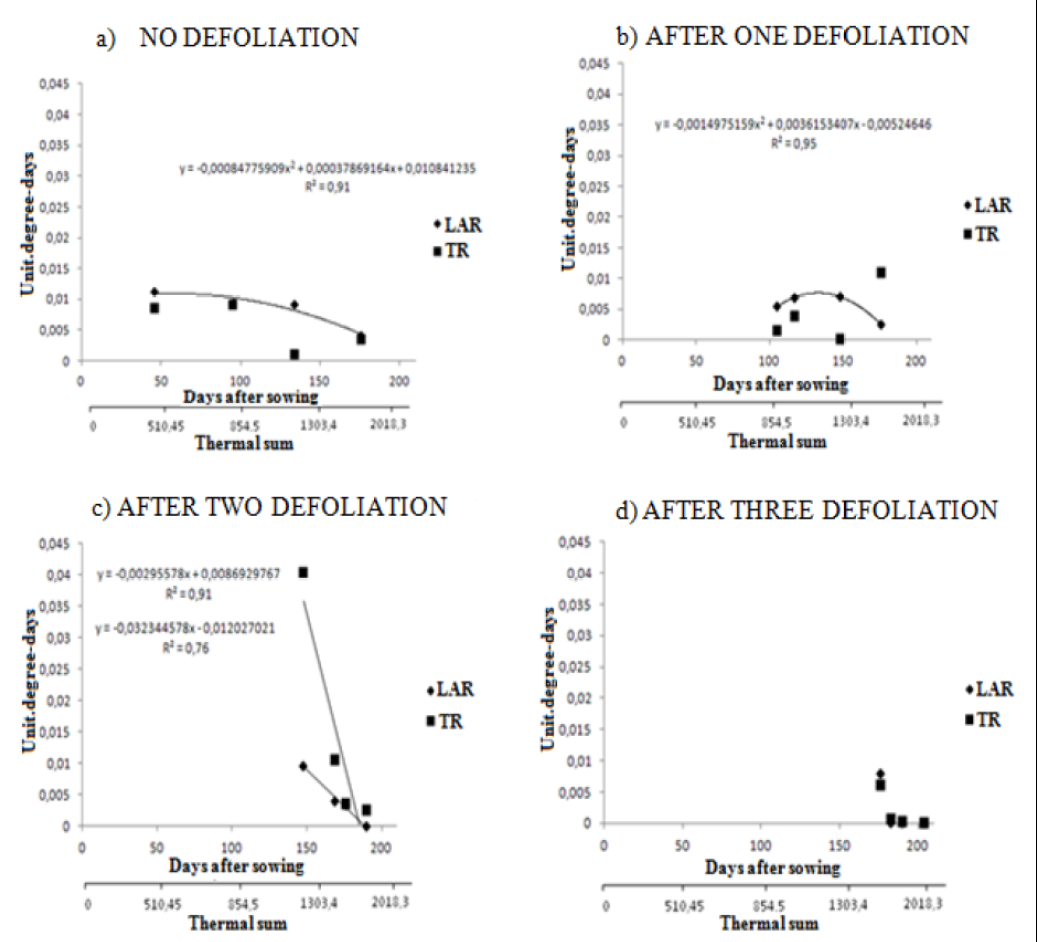