Intraoperative topical administration of mitomycin C, in different concentrations, on the cicatrization of mioplasties of the dorsal rectus of rabbits

Myoplasties of the extraocular muscle may cause adhesions between the operated muscle and the adjacent tissues, commonly generating cicatricial strabismus. With the purpose of reducing to a minimum the occurrence of adhesion, the effects of mitomycin C, an antifibrotic agent, were studied in concentrations of 0.008%, 0.02%, and 0.04% applied during intraoperative of myoplasties of the superior rectus muscle of rabbits. Fifty six animals were divided in five groups. During the postoperative, the operated areas were washed with physiological solution. Eye drop instillation to prevent inflammation and bacterial infection were used. The method to analyze the results consisted of clinical and histological evaluation and statistical analyzes. We also evaluated at the same time the amount of basic fibroblast growth factor (FGF-2) by immunohistochemical study. Clinically, more adhesions were found in the eyes of the control group than in the groups of treated eyes. However there was no significant statistics difference between the two groups (P>0.05). Histologically, mitomycin C caused a delayed cicatrization in the mioplastic areas, specially in the group who received the 0.02% concentration. The immunohistochemical showed FGF-2 marking in fibroblasts and macrophages, but between the groups there wasn't no difference. Based on those results, mitomycin C in the utilized concentrations was capable of delaying the cicatrization and consequently avoid the secondary strabismus without undesirable side effects. 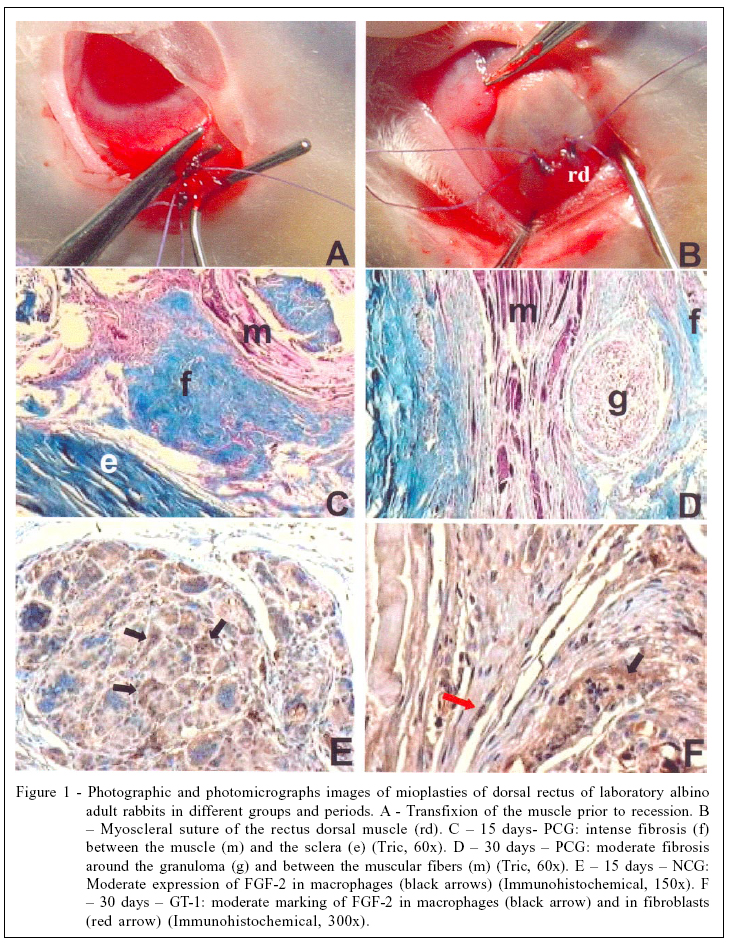 SciELO Analytics
Dimensions
Altmetric
Scite_
Intraoperative topical administration of mitomycin C, in different concentrations, on the cicatrization of mioplasties of the dorsal rectus of rabbits
PlumX