Antioxidant and cytotoxic studies for kaempferol, quercetin and isoquercitrin

The aim of the present study was to investigate a cytotoxic oxidative cell stress related and the antioxidant profile of kaempferol, quercetin, and isoquercitrin. The flavonol compounds were able to act as scavengers of superoxide anion (but not hydrogen peroxide), hypochlorous acid, chloramine and nitric oxide. Although flavonoids are widely described as antioxidants and this activity is generally related to beneficial effects on human health, here we show important cytotoxic actions of three well known flavonoids. They were able to promote hemolysis which one was exacerbated on the presence of hypochlorous acid but not by AAPH radical. Therefore, despite they expected scavenger action over free radicals an oxidants, these compounds could be very lesive to living organisms by acting over erythrocytes and maybe other cellular types.

Antioxidant and cytotoxic studies for kaempferol, quercetin and isoquercitrin

The aim of the present study was to investigate a cytotoxic oxidative cell stress related and the antioxidant profile of kaempferol, quercetin, and isoquercitrin. The flavonol compounds were able to act as scavengers of superoxide anion (but not hydrogen peroxide), hypochlorous acid, chloramine and nitric oxide. Although flavonoids are widely described as antioxidants and this activity is generally related to beneficial effects on human health, here we show important cytotoxic actions of three well known flavonoids. They were able to promote hemolysis which one was exacerbated on the presence of hypochlorous acid but not by AAPH radical. Therefore, despite they expected scavenger action over free radicals an oxidants, these compounds could be very lesive to living organisms by acting over erythrocytes and maybe other cellular types.

Some physiological processes of reactive oxygen species generation are important to organisms functions and defenses, like polymorphonuclear neutrophils activation by endogenous or exogenous stimuli. The neutrophil activation is followed by increased oxygen consumption and a reactive oxygen species (ROS) production cascade (oxidative burst) which generates, among others, free radical superoxide anion

There is increasing interest in natural antioxidant products for use as medicines and food additives [7, 8]. Phytochemicals such as polyphenols and carotenoids are gaining importance because of their contribution to human health and their multiple biological effects such as antioxidant, antimutagenic, anticarcinogenic and cytoprotective activities [9]. According to Haenen et al. (1997) antioxidant activities from flavonoids would be responsible for benefical effects over heart damage [10].

Considering reactive oxygen species participation on several pathologic processes and the crescent use of natural products as therapeutic, this study was undertaken in order to assess the action profile of three well known flavonoids kaempferol, quercetin and isoquercitrin, as scavengers agents of reactive oxygen species and evaluate if through their antioxidant properties these compounds are able to protect red blood cells against oxidative stress.

Reactions were performed according to Costa et al. (2004) [17], with some modifications. The samples were incubated on 50 mM sodium phosphate buffer solution pH 7.4, by 10 minutes, with HOCl (30 µM) followed by 5 minutes incubation with 2.8 mM tetramethylbenzidine (TMB). For the chloramine assay, before adding the samples, HOCl (30 µM) reacted with taurine (5 mM) by 5 minutes.

This assay was performed according to Vellosa et al. (2007) [18]. Superoxide anion reacts with nitroblue tetrazolium to produce a purple formazan, which has typical absorbance on 560 nm [19].

Samples were added to sodium nitroprusside solution (25 mM) and incubated at 25 ºC for 1.5 h. A solution aliquot (0.25 mL) was withdrawn and diluted with 0.15 mL Griess Reagent (1% sulfanilamide in 5% H3PO4 and 0.1% naphthylethylenediamine dihydrochloride) to be immediately read at 570 nm [20]. Sodium nitroprusside is known to decompose in aqueous solution at physiological pH, producing NO. Under aerobic conditions, NO reacts with oxygen to produce the stable products nitrate and nitrite, and the nitrite can be determined with Griess reagent. The chromophore is produced during diazotization of the nitrite with sulfanilamide and subsequent coupling with naphthylethylenediamine dihydrochloride. The final absorbance at 570 nm is diminished by an NO scavenger, because less nitrite is produced to form the chromophore [20].

Cytotoxic effects over red blood cells were evaluated by hemolytic action of the flavonoids and by the flavonoids interaction with oxidants HOCl and AAPH. The hemolysis were studied on a 5 % cell suspension on 10 mM sodium buffer solution, pH 7.4 (37 ºC) containing 150 mM NaCl and followed by hemoglobin releasing from erythrocytes measured by the supernatant absorbance at 414 nm [21]. The effect of flavonoids over erythrocytes was observed after 2.5 and 4.0 hours incubations. The flavonoid effects over the hemolysis promoted by 25 mM AAPH [22] was evaluated after 2.5 hours incubation. The hemolysis assay using 100 µM HOCl was carried out for 4.0 hours incubation.

Tests were carried out in triplicate in three to five separate experiments. Mean data values are presented with standard error of the mean (mean ± SD). Statistical analysis was carried out using one-way analysis of variance (ANOVA) and ORIGIN 6.0 version. The values of p < 0.05 were considered to be statistically significant. The amount of flavonols needed to inhibit free radicals concentration by 50%, IC50, was graphically estimated using a non-linear regression algorithm.

The flavonoids capacities to interact with ROS, neutralising or reducing them, were assessed by their scavenger action of TauCl, HOCl,

, H2O2 and NO. Moreover, the flavonoids interferences on ROS and free radicals actions were evaluated through cell systems.

It was observed that none of assayed samples were able to act over hydrogen peroxide. This is an important data because H2O2 is a lesive agent and specific compounds must be used to fight it. Moreover, H2O2 is necessary to peroxidases catalyzed reactions and it scavenging could be the cause of a lower enzymatic oxidative process.

The samples were effective on scavenging hypochlorous acid (figure 2A). Quercetin was the more efficient agent against HOCl possessing a low IC50 (0.0008 mM). Isoquercitrin and kaempferol had similar potential as scavengers of HOCl due their IC50 values, respectively 0.0018 mM and 0.0020 mM. All three samples presented effective action against HOCl, a strong oxidant that in biological systems can change important compounds to organism function like nucleotides and aminoacids among others [23-25]. Through the reaction with biological amines HOCl generates chloramines, long life oxidants whose reactivity depends on its lipophilicity [23, 26].

It was observed a significant difference on the action of the isoquercitrin on scavenging chloramines compared to the quercetin and kaempferol. Figure 2B shows the highest potential to quercetin (IC50 = 0.044 mM). Kaempferol have a good potential too (IC50 = 0.092 mM) and isoquercitrin was the less efficient chloramine scavenger by presenting low inhibition even with high concentrations (24% inhibition on 0.401 mM). These results may be due the extra hydroxyl group on quercetin and the block of the hydroxyl at position 3 of the ring C on isoquercitrin by linking to a sugar moiety (Figure 1).

It was constructed a standard curve (A570nm x molarity) of sodium nitrite revealed by Griess reagent to determine the nitric oxide level produced by sodium nitroprusside. By this curve (y = 0.22016x  0.00381; R = 0.9999; p<0.0001), on the assayed conditions, there was 40 µM NO on the reaction mixture of NO scavenging assay. As observed on figure 2C, the agents had not good potential on fighting NO. Quercetin was the most efficient promoting inhibition on 41% with 0.265 mM, meanwhile isoquercitrin and kaempferol had similar action by inhibiting the NO concentration around 21% with 0.172 mM. These data revealed the importance of the free hydroxyl group on position 3 of C ring and two hydroxyl groups on B ring as important sites for scavenging NO. This result was important because NO is a diffusible agent that reacts to superoxide anion generating peroxinitrite [27], wich causes LDL (low density lipoprotein) oxidation, a key process of atherosclerosis etiologic process [28].

The superoxide anion is a free radical frequently generated in human body as part of physiological (cellular respiration) or pathological processes (inflammatory diseases). Therefore, it is an important pharmacological target to prevent or fight oxidative stress. It is observed on figure 2D that quercetin (IC50 = 0.025 mM) is a powerful superoxide scavenger agent followed by isoquercitrin (IC50 = 0.111 mM) and kaempferol (IC50 = 0.243 mM). These results might lead to understand free hydroxyl groups on flavonoids B ring and hydroxyl at position 3 on B ring as important sites to superoxide scavenging.

Several reports have shown that erythrocyte attack by ROS is the key event in β -thalassemia, sickle cell anemia, glucose-6-phosphate dehydrogenase deficiency, and other hemoglobinopathies. Erythrocytes are extremely susceptible to oxidative damage because of the high polyunsaturated fatty acid content of their membranes, and their high cellular oxygen and hemoglobin concentrations [29]. Due to their susceptibility to oxidation, erythrocytes have been used as a cellular model to investigate oxidative damage in biological membranes. Further, erythrocyte lipid peroxidation may be involved in normal cell aging, and it has been associated with a variety of pathological events. Therefore, it seems reasonable to suggest that bioavailable antioxidants in foods and/or their metabolites would prevent free radical-related diseases by protecting red blood cells against ROS lesive effects.

The first intend was to confirm flavonols harmlessness against erythrocytes. Different concentrations of quercetin, kaempferol and isoquercitrin were evaluated over red blood cells. It was found cytotoxic potential of these compounds over erythrocytes, in the absence of ROS (Figure 3). This effect of flavonoids on red blood cells could be harmful to the oxygen transportation by red blood cells on living organisms. Isoquercitrin, the glycosylated flavonol, has higher hemolytic potencial than quercetin and kaempferol. Hemolysis is intensified when the samples remains more time in contact with the cells (Figures 3 A and B). 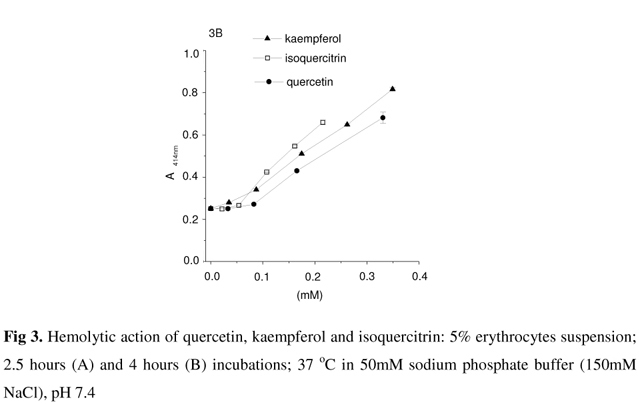 It was studied too the flavonoids action over hemolysis promoted by HOCl [21] and AAPH radical [30]. The AAPH radical promotes hemolysis efficiently but its action is inhibited by quercetin, kaempferol and isoquercitrin in a concentration - dependent mode (figure 4B): quercetin (IC50 = 0.0035 mM), kaempferol (IC50 = 0.0053 mM) and isoquercitrin (IC50 = 0.0230 mM). These data may be explained by a possible bigger affinity of these flavonoids by the AAPH reducing hemolytic effects of both agents, leading to the production of less lesive products.

Despite of the fact that the natural products were able to fight hemolysis by AAPH, figure 4A shows that the hemolytic effects of flavonoids and HOCl were intensified when they were put together in the erythrocytes suspension. This raised hemolysis could be explained by more lesive products formation that intensifies the oxidative damage over membranes. Due the interaction to HOCl, kaempferol turned more lesive to red blood cells than isoquercitrin. This probably occurred by formation of a more hemolytic derivative agent from kaempferol than the isoquercitrin one. It is important to observe that antioxidants may present beneficial or harmful effects depending on their affinities to ROS and by the harmlessness of their products generated through the interaction to ROS.

Several recent researches have demonstrated that diets containing high amounts of grains, fruits and different vegetables are able to reduce risks off many diseases occurrence such as, heart diseases, inflammatory diseases, cancer, and Alzheimer disease [31, 32], but in this paper it is possible to observe that natural products have the capacity to promote damage on human cells.

In this work, it was possible to observe that all assayed samples acted over the in vitro and ex-vivo studied systems. Among these actions, observed through each flavonoid effects over the assays, stand out direct and indirect antioxidant actions. It is important to notice too, that besides their antioxidant capacities, flavonols promoted high damage on red blood cells, mainly when ROS are present. Thus, the result set clarifies the complexity of the common usage of natural products as therapeutic agents. Antioxidant agents, frequently described as beneficial and able to be applied on therapeutics, are not unrelated to possible harmful effects to human being, and, just like any other medicine, they must present side and toxic effects. Meanwhile, such fact must not avoid these compounds application as pharmacological agents to fight ROS responsible for promote or exacerbate tissue damages. Their radical scavenging and antioxidant properties might have potential applications in food and healthcare industry.