In situ DNA transfer to chicken embryos by biolistics

Fertilized chicken eggs were bombarded with a biolistic device. Transient expression of the lacZ gene under the control of a human cytomegalovirus (CMV) promoter was assessed after in situ gene transfer using this approach. The influence of different pressures, vacuum levels and particles was tested. Survival rate improved as particle velocity decreased, but resulted in lower levels of expression. The best survival and expression were obtained with gold particles, a helium gas pressure of 600 psi and a vacuum of 600 mmHg. Under these conditions, all bombarded embryos showed <FONT FACE="Symbol">b</FONT>-galactosidase activity, indicating that this was an effective method for transformation of chicken embryos.

In situ DNA TRANSFER TO CHICKEN EMBRYOS BY BIOLISTICS

Fertilized chicken eggs were bombarded with a biolistic device. Transient expression of the lacZ gene under the control of a human cytomegalovirus (CMV) promoter was assessed after in situ gene transfer using this approach. The influence of different pressures, vacuum levels and particles was tested. Survival rate improved as particle velocity decreased, but resulted in lower levels of expression. The best survival and expression were obtained with gold particles, a helium gas pressure of 600 psi and a vacuum of 600 mmHg. Under these conditions, all bombarded embryos showed b-galactosidase activity, indicating that this was an effective method for transformation of chicken embryos.

DNA transfer methods have led to significant advances in exogenous gene expression. Transgenic animals have been used as models for studying gene functions and for producing very marketable proteins.

Microinjection has been the most studied form of transgenic production in mammals, but is considerably more difficult to apply to poultry (Li et al., 1995). The main difficulty with the latter is that at the time of ovoposition the embryo has already more than 60,000 cells. One of the strategies used to solve this problem is pronucleus transformation in recently fertilized eggs.

Other techniques used successfully in poultry include cell transfection with retroviral vectors, lipofection in ovo, electroporation and biolistics (Muramatsu et al., 1997). When stable gene expression and transgenic offspring are desired, stem cell transfection using retroviral vectors is the most convenient and successful technique (Petitte et al., 1990). The most commonly used stem cells are blastodermal or primordial germ cells. When blastodermal cells are used, they are transfected in ovo with retroviruses. The resulting chimaeric embryos contain foreign genes in their germ line and generate transgenic offspring (Bosselman et al., 1989). When primordial germ cells are used, foreign DNA is introduced into previously isolated cells using defective retroviruses. These cells are then transferred to recipient embryos to populate the gonads. Chimaeric embryos will produce transgenic offspring (Vick et al., 1993).

There are, however, two problems with these methods. First, embryo manipulation is very difficult, which increases the death rate, especially during the initial stages of incubation. Second, it is very difficult to predict the potential fate of the blastodermal cells and, consequently, to predict whether these cells will populate the gonads (Petitte et al., 1990).

This report describes the development and optimization of a method for the introduction and transient expression of genes in chicken embryos bombarded in situ.

Fertilized chicken eggs were incubated at 38oC for 30 h. In developmental stage 10 embryos (Hamburger and Hamilton, 1951) were bombarded in situ. A small hole (10-15 mm) was made on the rounded end of the egg to expose the embryo to bombardment. After bombardment, the shells were sealed with PVC film and the eggs then incubated for an additional 24 h at 38°C.

The plasmid used was pCMVb, which contains the lacZ gene from Escherichia coli under control of the human cytomegalovirus (CMV) immediate early gene promoter/enhancer (CLONTECH, Palo Alto, CA, USA). The protocol for plasmid precipitation into gold or tungsten particles was described by Aragão et al. (1996).

A laser pen indicated the center of the particle dispersion zone (dead zone). Two positions for embryo placement (center of the dead zone and 1 cm from the center) were tested. Embryo targeting with a laser pen was used only in the tungsten particle experiments.

b-Galactosidase (b-gal) activity was detected by a histochemical assay. Twenty-four hours after bombardment, embryos were fixed in a 4% paraformaldehyde solution for 5 min at 4°C, followed by staining for 4 h at 37°C with a chromogenic substrate containing 100 mM sodium phosphate, 1.3 mM MgCl2, 3 mM K4Fe(CN)6, 3 mM K3Fe(CN)6 and 1 mg X-gal (5-bromo-4-chloro-3-indolyl-b-D-galactopyranoside)/ml. b-Galactosidase expression was detected histochemically by the hydrolysis of X-gal to produce insoluble indigo. The resulting blue color indicated the localization of b-gal activity in transformed embryos. Transformation was verified by the absence or presence of blue points (expression units) representing gene expression in a cell or group of cells. All embryos with blue points were considered in the analyses, independently of the number of units expressed. Embryos that showed b-gal activity were classified into two expression categories: 1) expression in embryo body and extra-embryonic tissue (total expression), 2) expression in embryo body.

Non-bombarded embryos were used as negative controls and did not show any staining. Embryo survival, defined as the presence of heartbeat, was recorded 24 h after bombardment.

We initially tested a vacuum of 600 mmHg, gold particles and pressures of 400-600 psi. Thirty-six embryos were bombarded: 10 with 400 psi, 10 with 500 psi and 16 with 600 psi (Table I). The survival rate was approximately 30% for the three pressures. Approximately 53% of the embryos expressed b-galactosidase in their body cells, with 19.4% of these showing more than 100 expression units (blue points). The number of punctured yolks was close to 30% for the three conditions.

To reduce embryo damage and increase the survival rate, we repeated the experiments at a lower vacuum (400 mmHg instead of 600 mmHg). In this case, air resistance was greater and the particle velocity was reduced. Forty-eight embryos were bombarded: 14 with 600 psi, 11 with 800 psi, 6 with 900 psi, 11 with 1000 psi and 6 with 1500 psi (Table II). Higher helium pressures were not tested since several egg yolks ruptured at 1500 psi. Embryo survival was greater than that achieved in the previous experiment, reaching an average of 56%. A pressure of 1500 psi was harmful to the embryos with only one out of six embryos surviving bombardment under this condition. Overall, the efficiency of transformation was low; only one embryo with 20 blue points in the body cells was obtained at a pressure of 1500 psi. At the remaining pressures, expression in extra-embryonic tissue cells was seen in 28.6% of the embryos bombarded. Thus, our attempt to increase survival by reducing the vacuum was offset by a reduction in expression. To overcome the lower efficiency of transformation, higher pressures were tested, but these reduced embryo survival.

Figure 1 compares embryos bombarded at different vacuum levels using gold particles and helium at 600 psi. The embryo bombarded under a vacuum of 600 mmHg had a greater number of expression units than that bombarded under 400 mmHg, but showed abnormal tissue development.

In an attempt to improve embryo survival, smaller tungsten particles were tested since the particle material, size and form are known to influence the efficiency of transformation (Klein et al., 1992). Table III shows the results with 0.2-mm tungsten particles at 600 mmHg and pressures of 600, 900 and 1200 psi. Higher pressures were not used because of the increased frequency of ruptured yolks (66.7%). The average survival rate with the three pressures was 42.4%. A pressure of 1200 psi produced the greatest decrease in survival rate. Only one out of nine embryos bombarded survived. The number of expression units was low at all pressures tested and no embryo presented more than 10 expression units in the body cells.

In view of the continued low efficiency of transformation, another experiment was conducted using larger tungsten particles (1.2 mm). Our rationale was that the reduced mass of the 0.2-mm particle did not attain a velocity fast enough to penetrate the cells. Six embryos were bombarded with 600 psi helium at a vacuum of 600 mmHg. A laser targeting system was adopted to indicate the center of the particle dispersion zone. The embryos were positioned under the red point generated by the laser pen, i.e., directly in the center of the dispersion zone. The efficiency of transformation was 100%. All six embryos bombarded expressed b-gal in body cells. Nevertheless, the number of blue points was not very high, with only 50% of the embryos presenting more than 100 expression units. Survival rate was low, with only one embryo (16.7%) surviving bombardment. The normal development of tissues and organs was severely affected. These results indicated that placing embryos directly under the dispersion zone should be avoided.

In situ DNA transfer to chicken embryos was relatively successful. The CMV promoter used produced strong expression in several regions of the embryo and the reporter gene lacZ was easily detected. An efficiency of transformation of 68% and a 31.2% survival rate were obtained with gold particles, a 600-mmHg vacuum and a helium pressure of 600 psi. All efforts to improve the level of transformation using higher helium pressures or vacuums resulted in more expression but a lower survival rate. The use of smaller particles to reduce embryo damage was unsuccessful because it resulted in a lower efficiency of transformation.

Previous reports have shown that biolistics can be used to transfer genes to chickens in ovo (Li et al., 1995; Muramatsu et al., 1997). Li et al. (1995) transformed primordial chicken embryo cells using an adapted surgical syringe and were able to detect the transgene in 20% of the positive male offspring. Muramatsu et al. (1997) used tungsten particles and 285 psi nitrogen to obtain a 45.8% efficiency of transformation and 42.9% survival rate. However, the number and intensity of expression units were low. Under our conditions, greater efficiency of transformation and expression levels were obtained. The high helium pressure used in our work could account for the difference between our results and those of other studies. 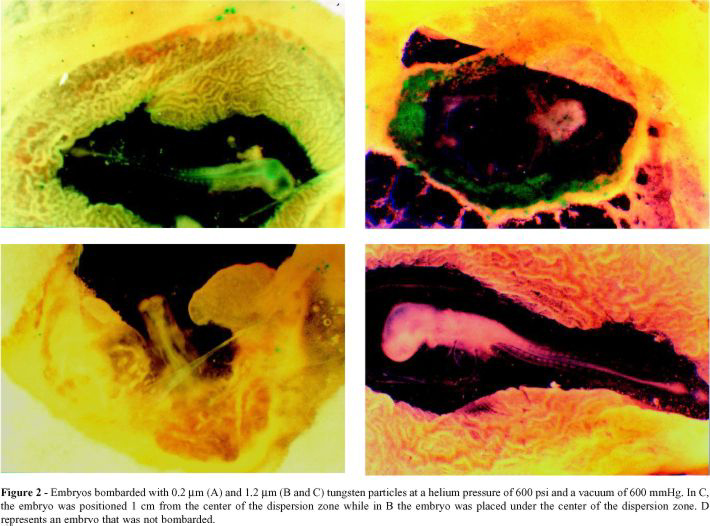